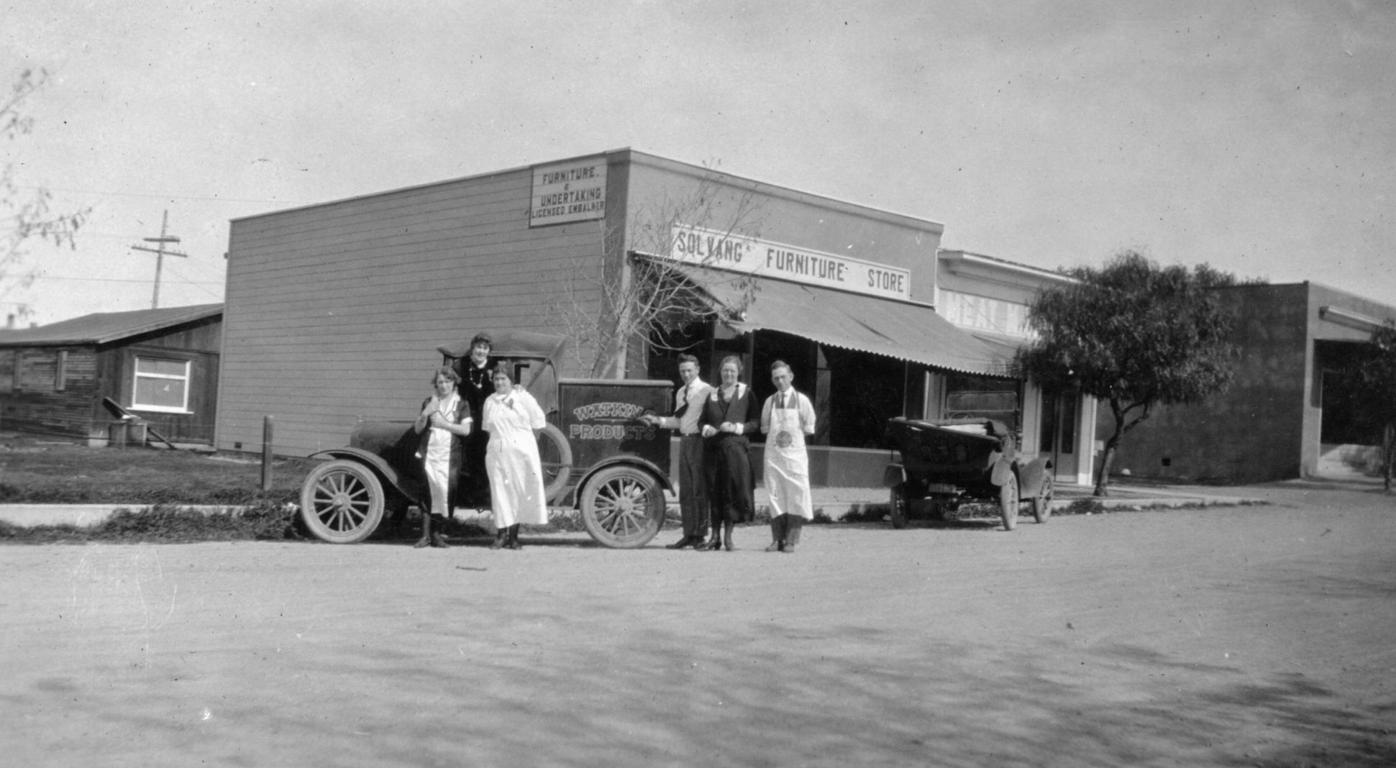 By 1920, Solvang’s population was 406 and the demand for businesses grew. Termann Paaske’s furniture and undertaking business on Main Street provided an essential service. 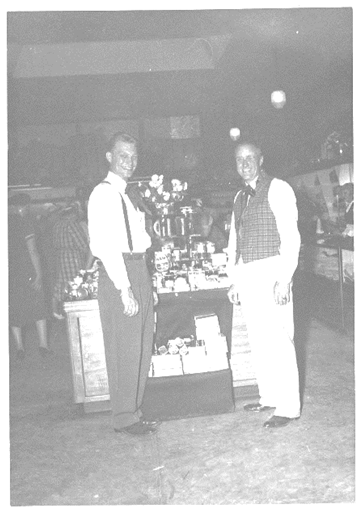 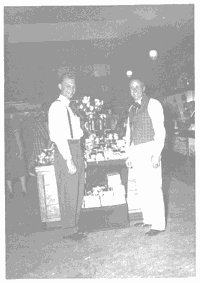 Jens Rasmussen, right, who served as SBA president in 1958, is seen in his downtown Solvang store in the late 1940s.

By 1920, Solvang’s population was 406 and the demand for businesses grew. Termann Paaske’s furniture and undertaking business on Main Street provided an essential service.

Jens Rasmussen, right, who served as SBA president in 1958, is seen in his downtown Solvang store in the late 1940s.

The Solvang Chamber of Commerce on Jan. 16 rang in 100 years of service to the town's business community with a look back to the past.

The Chamber began when six Solvang business owners founded the Solvang Businessmen’s Association (SBA), a direct ancestor of today’s Chamber. It was created to help solve the infrastructural problems that arose due to a rapidly growing town, which boomed from 80 adults at its founding in 1911 to well over 800 residents and a growing downtown business district by 1921.

According to historical records, during the January 1947 meeting, SBA President Ray Paaske presented a plan to honor the town’s heritage by building in the classic Danish “half-timber” style. The goal was to help encourage tourism, encourage the establishment of new enterprises and promote the welfare of the town of Solvang.

These themes are still at the heart of today’s Chamber, said Chamber Executive Director Tracy Beard, adding that the organization continues to look for ways to help improve the local business climate in a multitude of ways.

Assistance to small businesses comes in the form of “traditional” Chamber services, such as publicity and directories, she said. More recently, the Chamber continues to serve as the central resource center for state and federal loans and grants during the COVID-19 pandemic.

The renovation project, slated to begin construction in September and be completed in July 2022, will soon go to the City of Solvang Planning Department for review in March and will also be subject to review by the Design Review Committee before land use and building permits are issued.

The Chamber also is taking the lead to provide access to technology to help visitors and residents connect with and buy from retailers and service providers, explained Beard, noting that later this quarter, businesses will have access to mobile apps, mobile shopping carts and state-of-the-art communications using text and social media through the Chamber.

Over the years, former Chamber presidents have built upon the founders' original tenets, helping to make the town what it is today.

Chamber President Linda Johansen took the reins in 2004, at a time of financial challenge when tourism and travel was impacted by the 9/11 tragedy, she recalled.

“Being Chamber president was a wonderful experience that I treasure,” said Johansen, noting that her proudest achievement was starting the campaign to redevelop Copenhagen Drive.

Susan Williams, who served as president from 2012-13, also recalled her proudest moment.

“It was helping the Chamber adapt and pivot as the economy suffered through the 2012 global economic crisis,” she said.

Thanks to Williams' leadership, Solvang's annual Concerts in the Park series took off and "successfully drove traffic to the downtown area," according to Beard.

"The Chamber had learned from the past and continued to look for ways to ensure success continued,” he noted.

When asked to name his proudest achievement, Martino said it was “how we increased the diversity and uniqueness of the businesses, which helps make Solvang a unique destination.”

According to Beard, that same focus on diversity included a Tenant Mix Consultant Study and production of television commercials for which the Chamber won three Telly Awards. Both programs were funded by the largest economic grant ever given to the Chamber at that time, she said.

Longtime resident, local business owner and lifelong Chamber member David Rasmussen, whose great-uncle Aage Rasmussen joined the SBA in February 1921, one month after it was formed, and served as Chamber President in 1939, heralds the Chamber's legacy.

Rasmussen, 1987 Chamber president, followed in the footsteps of his grandfather Jens Rasmussen, who served as SBA president in 1958, and also his father who joined the newly renamed Solvang Chamber Board of Directors between 1966 and 1974.

“The Chamber is where I learned how to be a businessman," Rasmussen said. "It’s also where I learned the importance of tourism, which led to creation of the Solvang Visitors & Convention Bureau by the Chamber while I was president.”

As the saying goes, “It takes a village to raise a child” and the Santa Ynez Valley has stepped up – in time, effort, vision, and financial support from citizens who cannot be directly involved.

1911-2021: Solvang Chamber of Commerce celebrates 100 years with historical look back