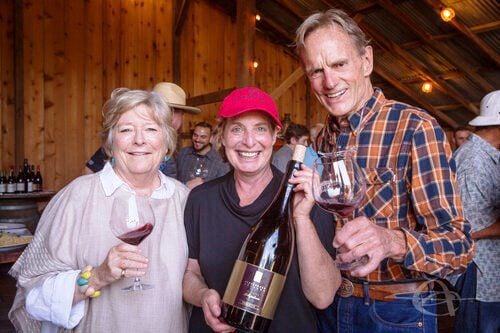 Both guests and winemakers gather to celebrate a taste of Sta. Rita Hills at a past Wine and Fire event. 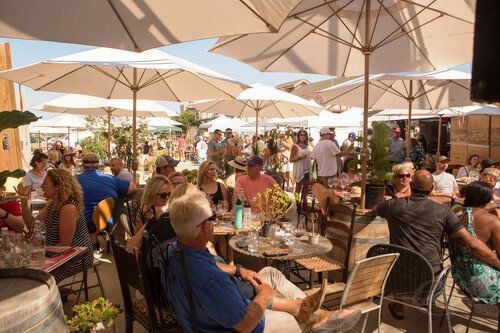 Guests enjoy outdoor wine tastings at a past Wine and Fire event.

Tickets can be purchased online at eventbrite.com/e/sta-rita-hills-wine-alliance-wine-and-fire-tickets-156579207625?aff=ebdsoporgprofile

The weekend event, set for Thursday, Aug. 12, through Sunday, Aug. 15, will pay tribute to the establishment of Sta. Rita Hills as a designated American Viticultural Area — first planted by Sanford & Benedict Vineyard — as well as honor its founding pioneers, including late winemaker Jim Clendenen of Au Bon Climat who died in mid-May.

Setting roots in the hills

According to records, pioneer winegrowers Sanford & Benedict Vineyard and Lafond Vineyards and Winery were the first to lay roots in the region a half century ago.

Richard Sanford and Michael Benedict of Sanford & Benedict Vineyard in 1971 first planted after determining through research and development that the environment was best suited to grow pinot noir and chardonnay. They chose the area due to its earthy soils containing large deposits of limestone, diatomaceous earth and sandy loam, paired with the daily ocean winds that tunnel up the transverse valley from Point Conception, according to Barbara Satterfield, spokeswoman for the Sta. Rita Wine Alliance.

Lafond Vineyards and Winery then followed suit in 1972, and laid additional plantings in the early '80s. Over the next 20 years, approximately 1,100 acres were planted, predominantly for pinot noir and chardonnay.

Establishing the region as an AVA, however, began in 1999 when area winegrowers Sanford, Bryan Babcock, Rick Longoria and other local pioneers set out to make it official. The group submitted an application a year later to the Alcohol and Tobacco Tax and Trade Bureau, requesting that Sta. Rita Hills be designated an AVA. Their request was granted in 2001.

With a total area of 30,720 acres, the Sta. Rita Hills AVA is home to over 59 vineyards, totaling 2,700 hundred acres planted with pinot noir, chardonnay and 18 other cool climate wine grape varieties.

Locals will have the opportunity to toast to Sta. Rita Hills' beginning with a visit to the historic Sanford & Benedict Vineyard on Thursday, Aug. 12, where 10 different AVA wine producers will be on hand to offer tastings ranging from current to special library offerings, according to the event announcement.

The next day, on Friday morning, attendees will gather at Montemar Winery in Lompoc and have the opportunity to meet featured producers of sparkling wine and sample their products. Moderator Adam Lee will lead a discussion about how sparkling wines got their start in the region, followed by a walk-around tasting.

Friday evening, the celebration will relocate to Alma Rosa Vineyard where AVA pioneers will be honored during a La Paulee-style dinner.

Sanford, who was inducted into the California Vintners Hall of Fame in 2012 and was honored as Vintner of The Year for 2020 by the Sta. Rita Hills Wine Alliance, will be one of six honorees. Local winemaker and area historian Wes Hagen will introduce the pioneers and present the 2021 Vintner of the Year Award.

Frank Ostini of Hitching Post Wines will offer a tribute to Clendenen of Au Bon Climat. Guests are encouraged to bring wines to share in celebration of the 20-year anniversary of the AVA.

On Saturday morning, Spear Vineyards and Winery will host the “Time in a Bottle” educational event, which will visit the future and aging process of Sta. Rita Hills' wines. Gregory Brewer, Wine Enthusiast’s Winemaker of the Year, and five other longtime producers will emcee the event.

Saturday evening, the weekendlong event will wrap up with a Grand Tasting at the La Purisima Mission in Lompoc. The Wine and Fire finale will showcase 40 wineries, local farmers, caterers and barbecue chefs on-site to offer a celebratory taste of the Sta. Rita Hills.

Tasting rooms in the region also will welcome event Passport Ticket holders for a weekend of specials and wine tastings.

FROM THE VINE Winemaker's dinners and more offer opportunities to engage in great wine and food.

The zen of Zin and the art of listening | Jess Knauft

Guest Commentary: “We are doing a lot of listening.” It’s something that a lot of us could benefit from out here in California, especially as we take the time in our hectic post-vaccine world to slow down, celebrate life and come up with ideas and plans to make the world a better place.

The family-owned vineyard and estate, located near the middle of the Santa Rita Hills Appellation on Highway 246, is known for producing award-winning pinot noir and chardonnay wines.

Wine grapes fall to No. 5 in Santa Barbara County crop values, strawberries No. 1, cauliflower No. 2

For the first time since 1995, wine grapes fell out of the top four crops in Santa Barbara County, giving way to cauliflower, broccoli and nursery products in its slide from No. 2 to No. 5, while strawberries remained at the top, according to the 2020 Crop Report released last week.