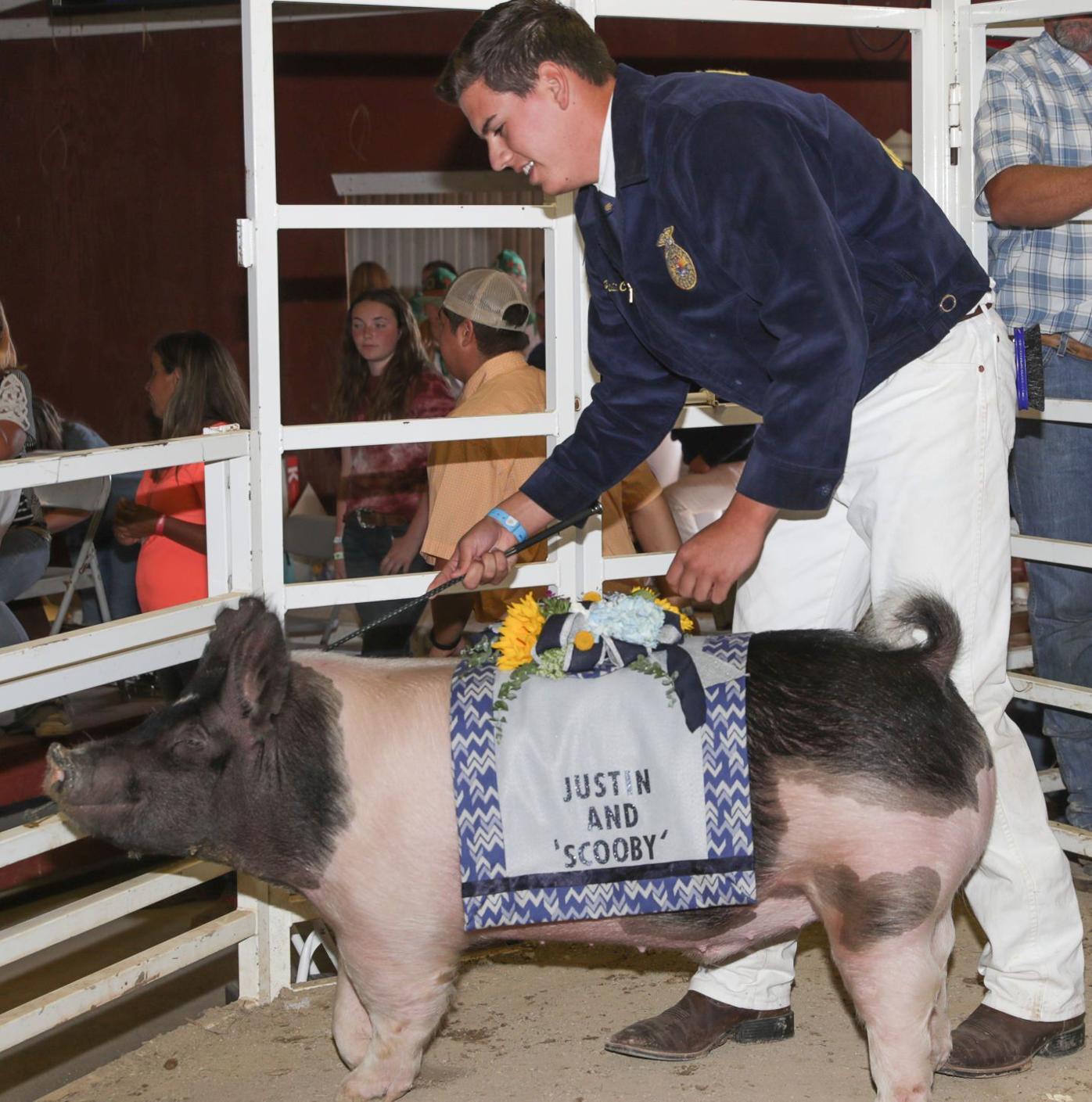 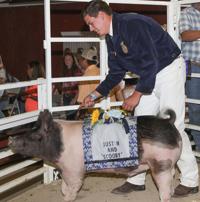 Justin Cuellar walks his FFA champion hog Scooby onto the auction stage during the 2018 Santa Barbara County Fair livestock auction at the Santa Maria Fairpark. Officials have canceled the 2021 fair due to the COVID-19 pandemic but are forging ahead to continue the livestock auction in a virtual format. 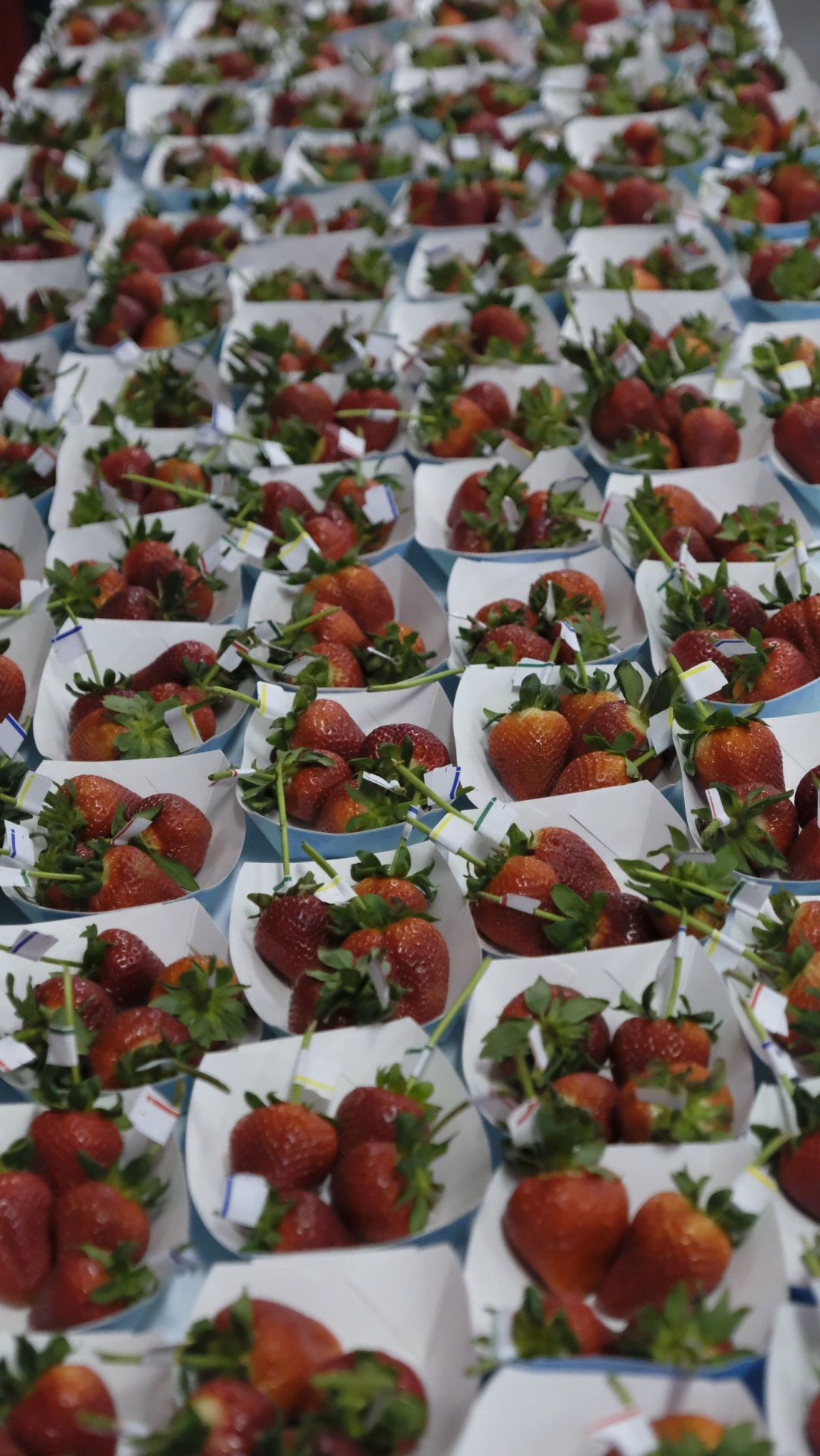 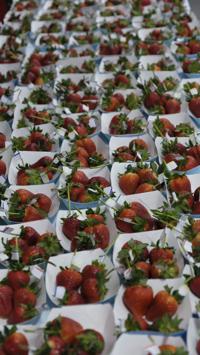 Trays of strawberries are lined up awaiting tasting during the 2019 Santa Maria Valley Strawberry Festival. Those hankering for a taste of the area's sweetest crop might be able to buy them from their cars this year if the Santa Maria Fairpark succeeds in creating a Strawberry Cruise. 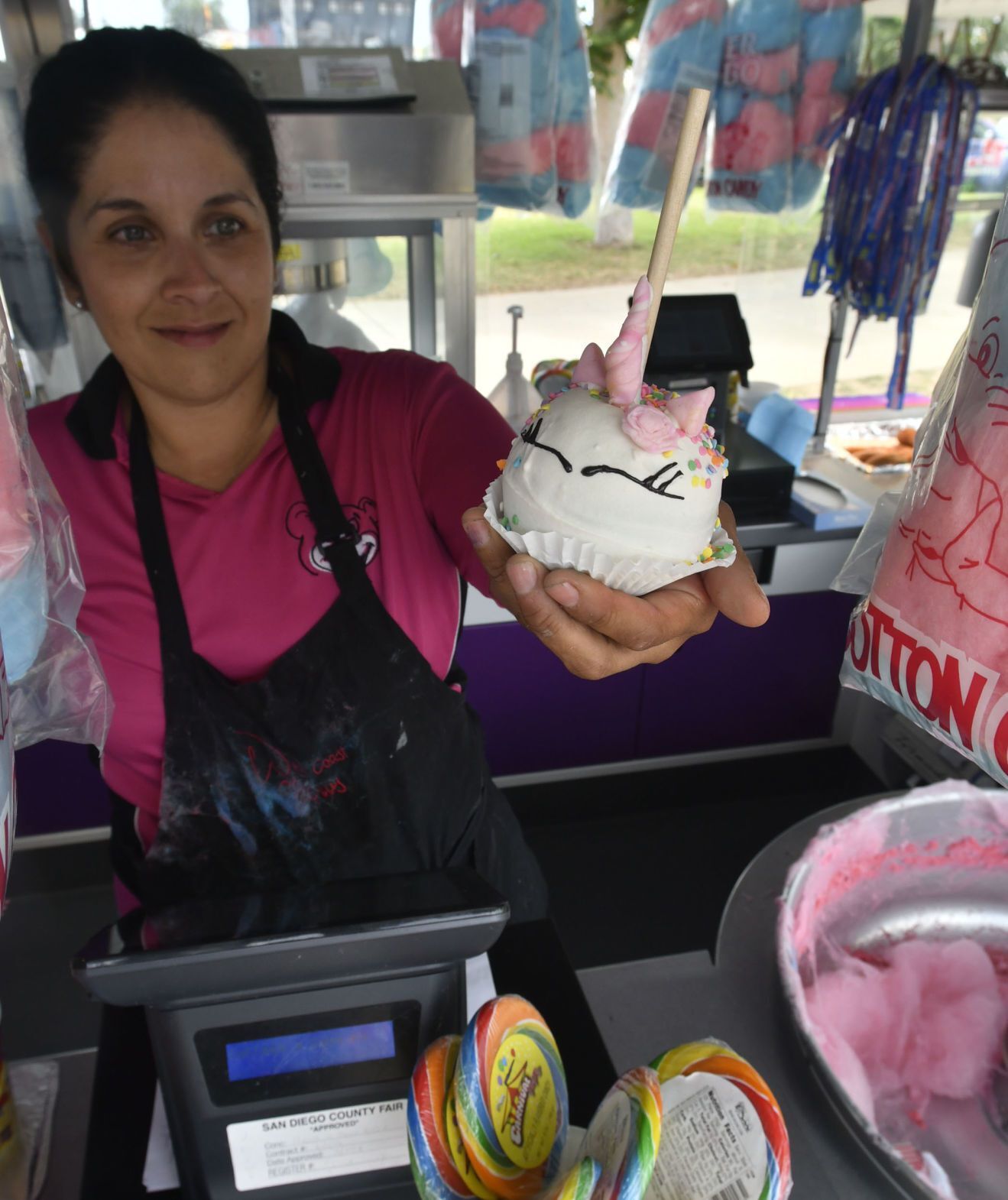 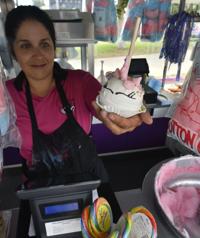 Luz Salazar serves up a Unicorn Apple at the Sugar Bear Treats booth during the 2018 Santa Barbara County Fair. The public might get a chance to buy "fair food" if the Santa Maria Fairpark can put together a drive-through Strawberry Festival this year.

Trays of strawberries are lined up awaiting tasting during the 2019 Santa Maria Valley Strawberry Festival. Those hankering for a taste of the area's sweetest crop might be able to buy them from their cars this year if the Santa Maria Fairpark succeeds in creating a Strawberry Cruise.

Luz Salazar serves up a Unicorn Apple at the Sugar Bear Treats booth during the 2018 Santa Barbara County Fair. The public might get a chance to buy "fair food" if the Santa Maria Fairpark can put together a drive-through Strawberry Festival this year.

The Santa Maria Fairpark may not be the picture of financial health it was in 2019, but it’s surviving the COVID-19 pandemic without any help from the state by taking new approaches to old events.

“With the events we had at Christmas, the rummage sale and the county renting the facility for COVID testing, we’re making just enough money to keep the doors open,” said Kevin Merrill, a member of the board of directors for the 37th District Agricultural Association.

The association operates the Fairpark and sponsors the Santa Barbara County Fair, the biggest annual moneymaker for the facility.

“We will not have a fair in July, but we’re trying for a virtual offshoot of the animal show,” Merrill said Thursday. “And the Strawberry Festival may be a drive-through kind of thing, where people can drive through and get some strawberries and fair food — without getting out of their cars, of course.”

The Fairpark is forging ahead with plans to stage a virtual livestock auction, although there won’t be any classes for small animals because of the need for hands-on evaluation, the difficulty in transporting them to processors and restrictions on rabbits, officials said.

“We are diligently working to ensure the survival of our fair and for that reason we are planning for market sales only and, unfortunately, will not be able to offer separate showmanship classes,” fair officials said in a letter announcing the virtual auction.

“We know the community will rally around such an important experience in our livestock community and encourage your support through sponsorship of the virtual show and market auction,” they said.

DNA kits became available for all species Feb. 24, with steer and heifer DNA to be returned by March 12 and sheep, goats and swine DNA due by May 7.

The virtual livestock show is set for July 5 to 9, followed by the virtual auction July 15 and 16.

But the Strawberry Cruise as a substitute for the Santa Maria Valley Strawberry Festival — the Fairpark’s other big revenue source — is far less certain to materialize.

Fairpark officials are working with the County Public Health Department to determine what can be allowed and what requirements will have to be met for such an event, but the administration just isn’t ready yet to say it’s a go.

Merrill said he believes the county fair will return in 2022, and the board would like to see other events this summer or fall, but nothing is on the drawing table at this point.

“I think we’re looking at anything we can do, but it’s so hard to plan with the uncertainty of the pandemic,” Merrill said. “We just don’t know what the situation is going to be. Even the people telling us what to do don’t really know what’s going on.”

Numerous events that have provided the Fairpark with revenue — business and trade shows, fundraisers for nonprofit organizations, car shows — were canceled last year and are not expected to return until the pandemic has ended.

It could take two years before some of those events can reorganize, and some may never return to the Fairpark or anywhere else.

Last year, 37th District Agricultural Association officials — like their counterparts throughout California — were hoping the state would provide some financial assistance like it has to small businesses, but that hasn’t happened.

“We’re on our own,” Merrill said, noting that some grant funds are available, but the requirements for approval and restrictions on how the money is spent make them virtually unattainable or not worth the time and effort involved.

A number of county fair organizations elsewhere in the state have folded, unable to pay salaries and utilities, but there’s no indication state lawmakers are concerned about keeping the rest of them alive.

“They have their hands full, and I don’t think they realize the importance [of county fairs] to the local economy,” Merrill said. “Agriculture is still the biggest contributor to our economy.

“And I think they lose sight of what makes a community unique,” he added. “[The fair] is a great showcase. It’s an opportunity to show what we do. The average person just doesn’t understand what’s involved in agriculture.”

Despite shortage of ripe berries, Strawberry Cruzin’ will roll at Santa Maria Fairpark

The weather may not be cooperating, but Santa Maria Fairpark will be ready for Strawberry Cruzin’ to start its five-day roll Wednesday afternoon to bring the Valley’s sweetest crop as well as a taste of festival food to residents and visitors.

1911-2021: Solvang Chamber of Commerce celebrates 100 years with historical look back