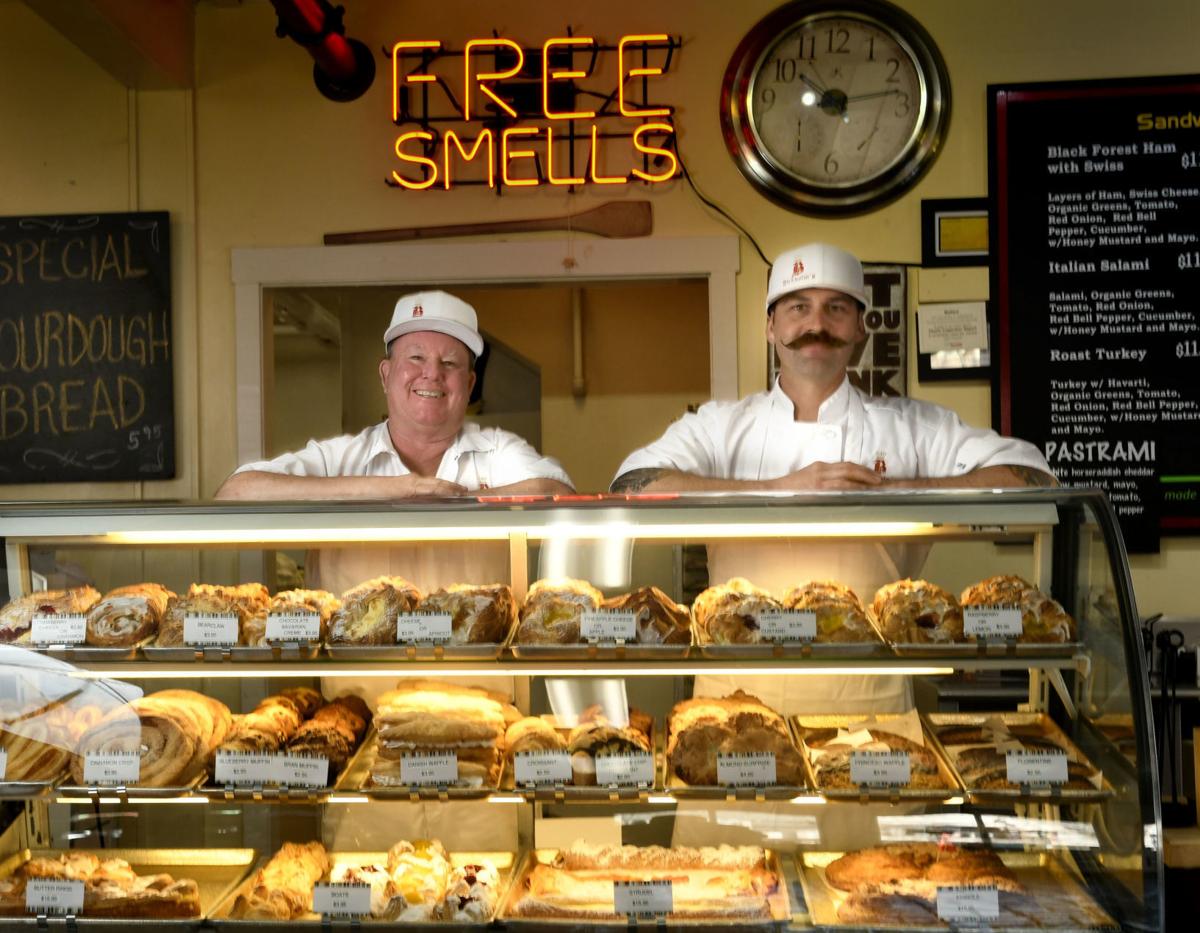 Thomas Birkholm, right, who is taking over the family's Birkholm’s Bakery in Solvang, poses for a picture with his father Carl. The iconic Danish bakery is celebrating 69 years in business.

A pedestrian walks past Birkholm’s Bakery, at 460 Alisal Road in Solvang. The iconic Danish bakery is celebrating nearly 70 years in business. 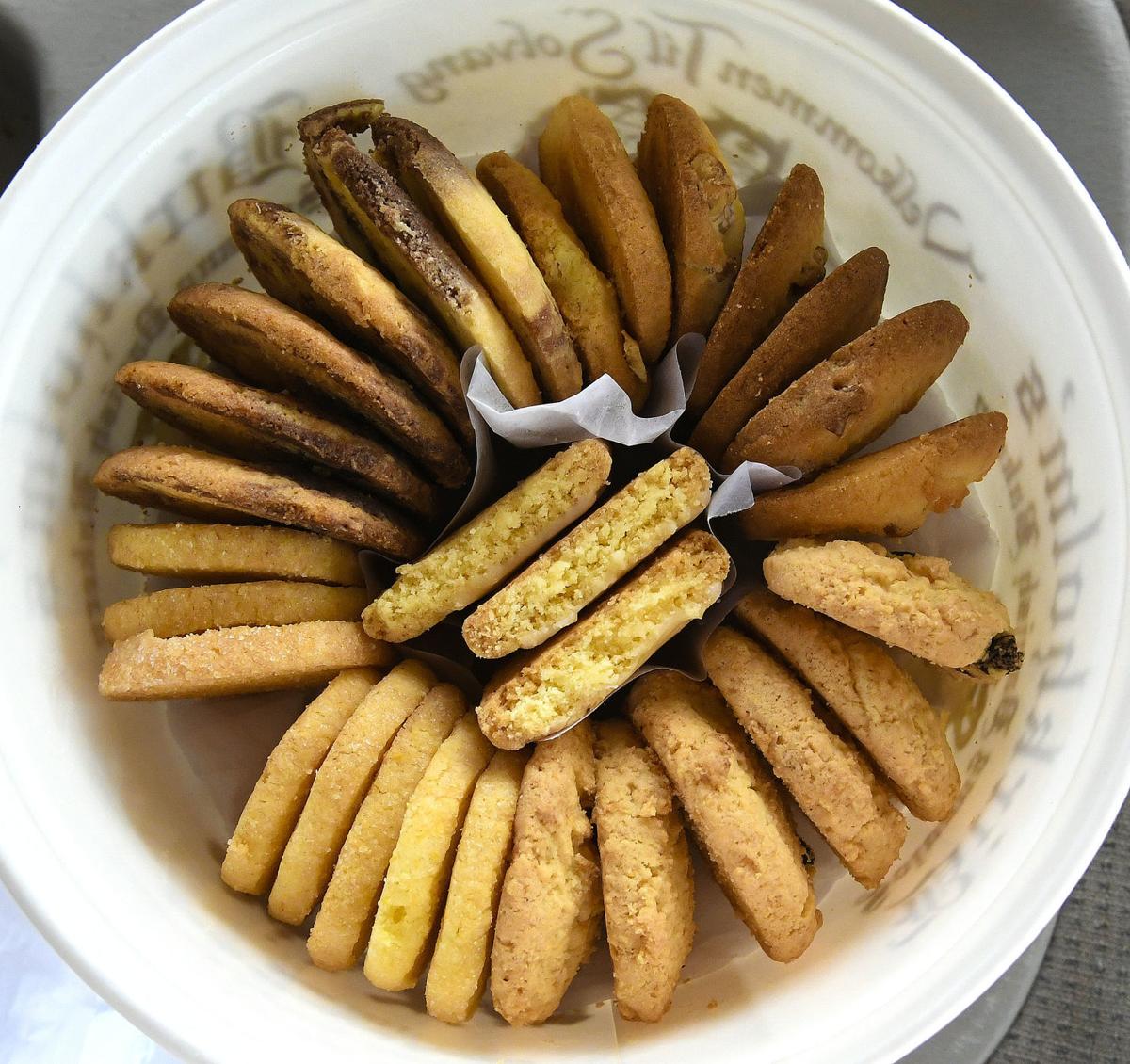 A tub of Danish Butter Cookies from Birkholm’s Bakery is shown. The waxed paper container is different from the original used in the 1950s, but only because the Italian manufacturer no longer attaches handles.

“We make about 36,000 cookies per week,” said Thomas Birkholm who, with his father, Carl Birkholm Jr., and mother, Elizabeth, owns Birkholm’s Solvang Danish Bakery and Café.

Thomas, 34, is a third generation baker at his family’s bakery, which turns 69 this year. As is happening with the town of Solvang, the Birkholm’s baking business is readying for a transition to a new generation; a generation which will be tasked with moving Solvang forward, while honoring the city’s roots and inherent appeal – a good portion of which, the Santa Ynez Valley owes to Thomas’ grandfather, Carl “Cookie” Birkholm.

Carl Birkholm Sr. haled from the Danish island of Ærø, also the birthplace of Solvang’s Bent Olsen, owner of Olsen’s Danish Village Bakery. Both men first learned their baking craft on this island, both eventually transferred those base skills to the United States and more specifically, to Solvang.

Carl Birkholm Sr., with wife, Charlotte, opened the original Birkholm’s Bakery in 1950, on Solvang’s Copenhagen Drive. A small business operating out of a Knudsen family-owned storefront, he found himself producing more baked goods than the little town could move through, prompting Birkholm Sr. to put on his marketing hat. He put up a Birkholm’s billboard along the 101, just south of Buellton.

“At that time, the pastor at [Old Mission Santa Inés] requested that Solvang businesses close on Sundays. My father, being who he was, decided that if he opened on Sundays, he could capture weekend traffic. So he started to open on Sundays, but close Mondays, and posted "closed Mondays"on his highway billboard,” reminisced Carl Birkholm Jr.

Birkholm Jr. continued, with a chuckle, “People who saw that sign, thought that all of Solvang was closed on Monday.”

From the Vault: Birkholm's of Solvang in the pages of the Santa Ynez Valley News

Carl Birkholm Sr. and Ray Paaske, whose building complex “Copenhagen Square,” would become home to a new Birkholm’s Bakery, were instrumental in the formation of Solvang’s design and architecture which is still apparent, today. And all of those ubiquitous white lights for which the Southern California village is so well-known? Carl Birkholm Sr. started that Solvang décor trend.

As tourists started to trickle into Solvang, Birkholm Sr. expanded his business. In 1951, he opened the Birkholm’s Bakery location in Paaske’s Copenhagen Square, on Alisal Road. Soon, more than just Solvang visitors would be exposed to the Birkholm name.

Birkholm’s business increased – hand-in-hand with Solvang’s visitor count – and so did its notoriety.

Carl Jr. and Thomas proudly display letters of gratitude in the upstairs space of their Solvang bakery which at one time housed lodging rooms. One witty “thank you” note from Groucho Marx, dated 1959, was written in response to the Danish pumpernickel he had enjoyed. Another letter dated 1985 from The White House, and more specifically former President Ronald Reagan, thanks the family for holiday cookies.

In the decade that followed the 1951 bakery opening, Birkholm’s petits fours would be served to passengers on airlines such as Continental Airlines, accounts which aided in another Birkholm’s expansion: the late-1960s opening of a baking facility in Buellton.

The truckloads of baked goods coming out of Birkholm’s baking plant wore packaging which portrayed the roadways leading to Solvang, as did the designs on the semi-trucks, themselves. And at that time, Birkholm’s was deploying about five tractor-trailers on a daily basis. In the 1960s, Birkholm’s was the largest employer in the Santa Ynez Valley.

In 1977, an offshoot bakery, affectionately named “Birkholm’s Jr.”, opened at 1555 Mission Drive, what is now part of Succulent Café. Birkholm’s Jr. operated it until 2000 and simultaneously, the Birkholm family continued to own the Alisal bakery building, leasing it to Solvang Bakery in 1990. In 2011, as Solvang Bakery’s lease neared its end, Carl Jr. and Elizabeth were faced with the decision as to what to do with the business.

A 2004 graduate of Santa Ynez Valley Union High School, Thomas went on to become an EMT-First Responder and Paid Call Firefighter (PCF) with the Solvang Fire Department, where he stayed for four years. In 2008, Thomas moved to Big Bear, working ski patrol and as a PCF until 2012, when he decided to move home to the Santa Ynez Valley and help his parents propel Birkholm’s Bakery into its next phase.

Reflecting on Thomas’ non-baking career start, Carl Birkholm Jr. laughed, “I didn’t want to be a baker at first, either.”

“Growing up, the bakery was my daycare,” added Thomas Birkholm. As he readies to take over the business in full within the next couple of years, Thomas will involve his own family in the operations. His fiancée, Shinae – with whom he has two daughters, Penelope, almost four, and Willa, one and a half – will help with the bakery’s more modern marketing tactics, like social media, among other business tasks.

Thomas’ day starts at 4 a.m., when he preps the Danish pastry and starts the Rundstykker (breakfast hard-rolls). He moves on to the Delight Cookies and the other breads, often works front-of-house, does dishes, works on custom cake orders, and leaves by mid-afternoon. Thomas sometimes helps to close the bakery, which is open to the public from 7 a.m. to 5:30 p.m., seven days per week.

All of Birkholm’s baked goods are made from scratch, with original, hand-written recipes. Thomas and the rest of the baking team keep things “traditional, old-school” in the bakery, even eschewing the use of digital scales.

The cookie-dominant baked offerings – selling an average of about 600 tubs of cookies per week, which take four days to make plus one day to pack – is now joined by more café-like options. The current Birkholm’s menu includes sandwiches, salads, soups and the like, made with locally-grown, organic ingredients and served with, or on, house-baked breads. Other newer facets to the business model are a full espresso bar, plus an expanded menu of gluten-free and more-health-conscious items. Also new to Birkholm’s, custom-order cakes.

Thomas hopes to regenerate the once-existing wholesale component to the business, by placing cookie tubs and other Birkholm’s products in mass retailers, or with specialty food purveyors like Goldbelly.

Thomas is also the newest board member of the Solvang Danish Days Foundation, and is looking forward to continuing his work on the annual festival with which he’s been helping since he was just a tot. He hopes to visit Denmark in the next year, to see what might be trending in their bakeries and to possibly bake with some of the Nordic nation’s current crafters – almost like a full circle back to his, and Solvang’s, Danish bakery roots.

So, what’s next for Thomas and the now nearly 10,000-square-foot Birkholm’s Bakery? He emphasized, “I plan to stay here; I’m dedicated to this bakery and to Solvang.”

The Solvang City Council recently invited 5,500 residents and businesses to a Solvang tourism rebranding workshop at City Hall. Let’s start by ignoring the fact that inviting 5,500 people to a room that accommodates fewer than 100 people is a miscalculation.

Missing my edible roots, I turned to some of the Santa Ynez Valley’s chefs and restaurateurs who also hail from New York or who have spent man…

• Ever notice how those Danish cookie buckets sold at Birkholm’s Solvang Danish Bakery and Café resemble hotel ice buckets? There’s a story behind that, but you’ll need to ask Carl Birkholm Jr. what that story might be, when you catch him at the bakery.

This Valentine’s Day weekend and through the month of February, some participating Santa Ynez Valley restaurants and tasting rooms are offerin…

Applications are open for 2020 Solvang Danish Days Maid. The application deadline is March 15.

Suzan Hamilton-Todd's five-week European adventure was canceled due to travel restrictions put in place during the coronavirus pandemic.

Thomas Birkholm, right, who is taking over the family's Birkholm’s Bakery in Solvang, poses for a picture with his father Carl. The iconic Danish bakery is celebrating 69 years in business. 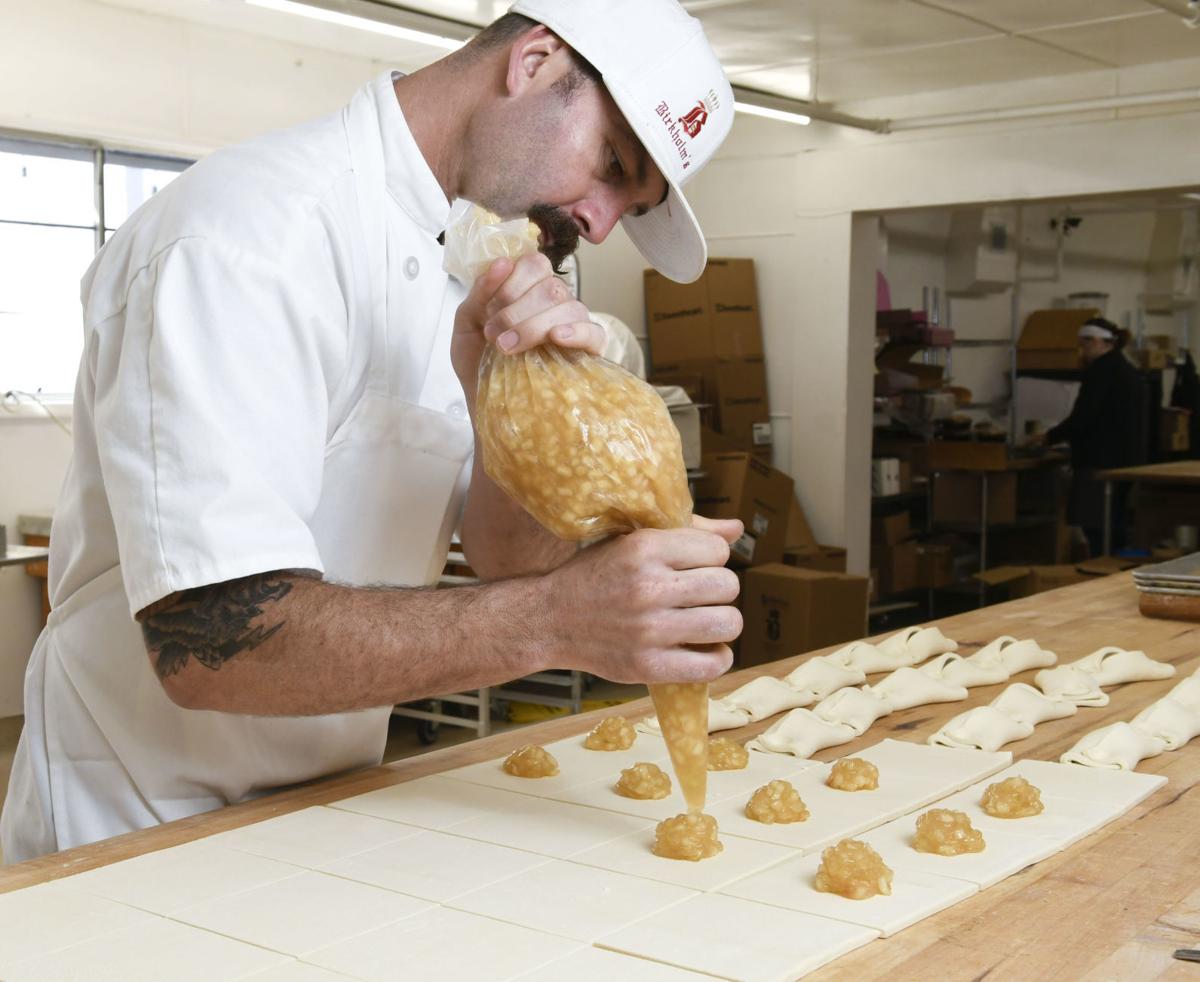 A pedestrian walks past Birkholm’s Bakery, at 460 Alisal Road in Solvang. The iconic Danish bakery is celebrating nearly 70 years in business. 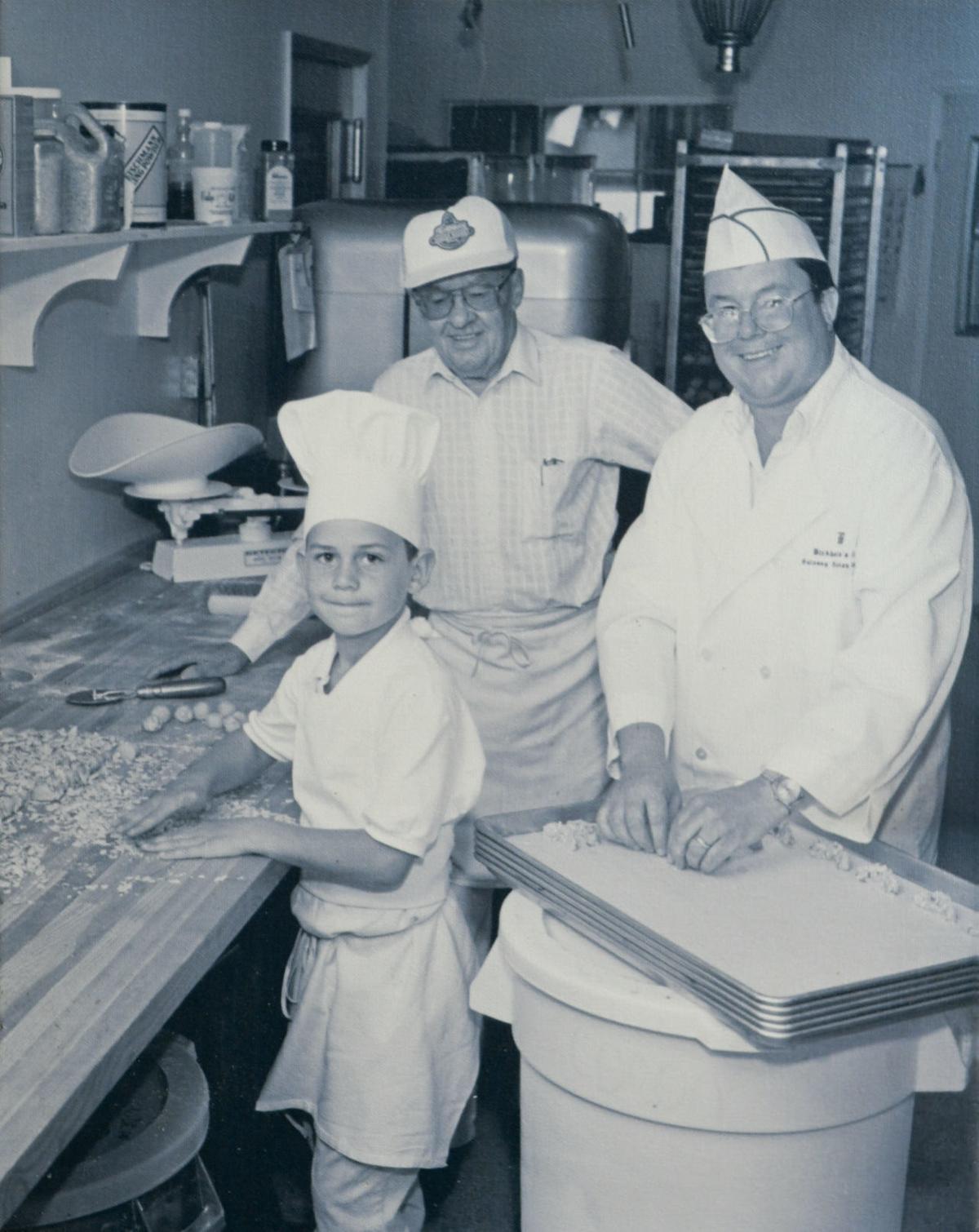 Eight-year-old Thomas Birkholm, who is taking over Birkholm’s Bakery, poses for a picture with his grandfather Carl “Cookie” Birkholm and father Carl Birkholm, Jr.. The iconic Danish bakery is celebrating 69 years in business.

A tub of Danish Butter Cookies from Birkholm’s Bakery is shown. The waxed paper container is different from the original used in the 1950s, but only because the Italian manufacturer no longer attaches handles. 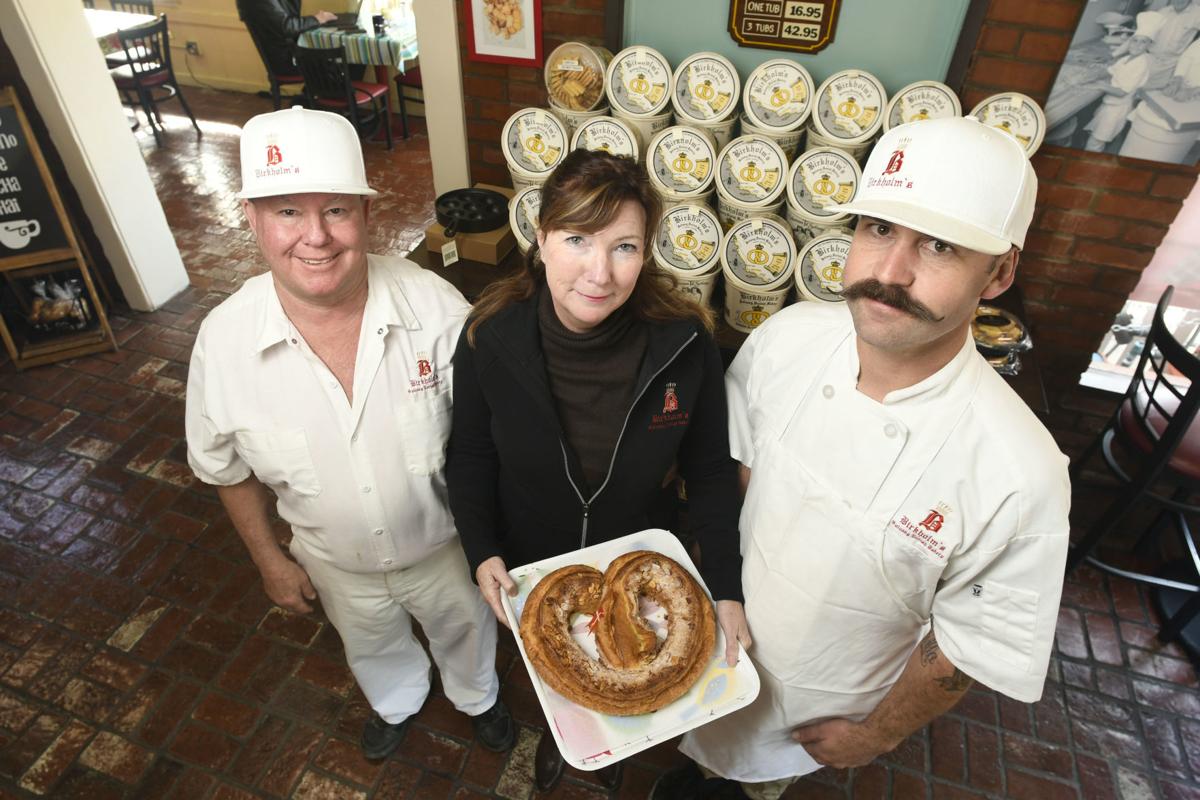 Thomas Birkholm, right, who is taking over the family's Birkholm’s Bakery in Solvang, poses for a picture with his father Carl and mother Elizabeth. The iconic Danish bakery is celebrating nearly 70 years in business.