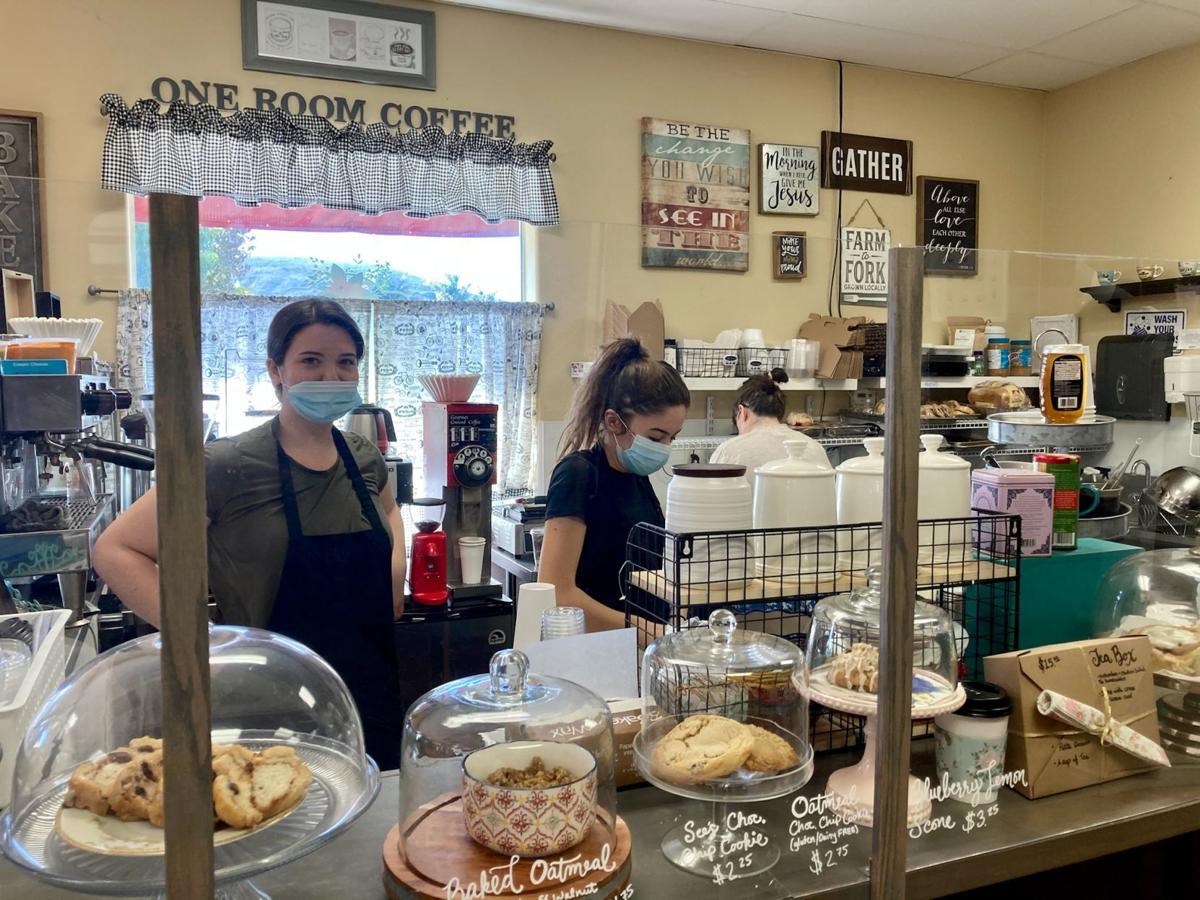 Staff members at One Room Coffee Shop in Lompoc bag baked goods for visiting customers and a Door Dash driver waiting to deliver an order on Jan. 26. 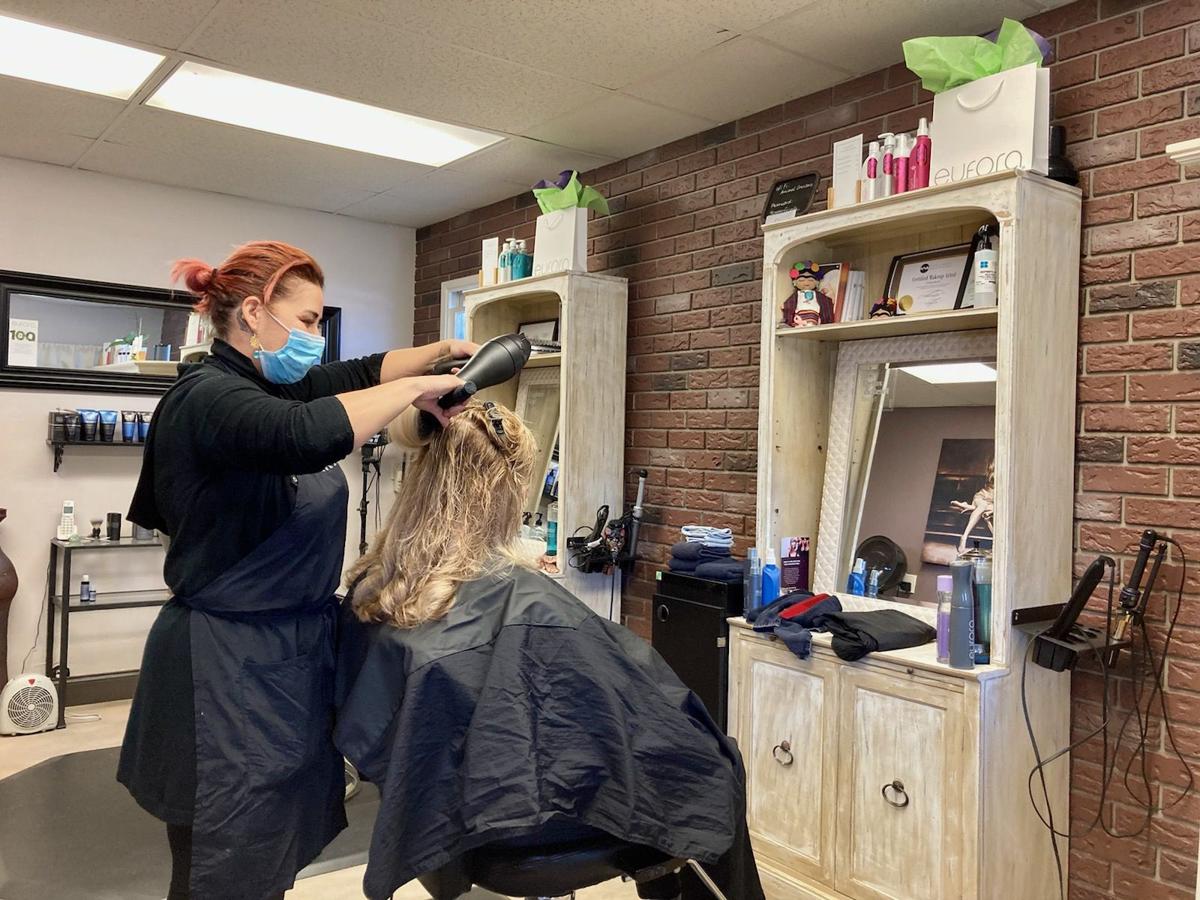 Celina Roell, owner of Lace and Leather Salon and Barbering in Solvang, blow-dries Suzanne Powell's hair after coloring and styling it on Jan. 26.

Some local shops are getting back to businesses after Gov. Gavin Newsom lifted the regional stay-at-home order on Jan. 25, with officials citing dropping COVID-19 case rates and a projected decrease in hospitalizations in the coming weeks.

Others, however, aren't so quick to change course.

Hether and John Frias, owners of One Room Coffee Shop in Lompoc, said after allocating money to construct an outside dining area they had to remove once the regional stay-at-home order was announced in December, they are taking things slower this time around.

"We're not in any rush," Hether Frias said. "Every time something changes, we've been so quick to change with it — buying awnings and [adjusting dining room] to 6 feet apart. I think this time we're a little more hesitant to do that. We're going to wait and see what happens and not be so quick to jump on the bandwagon."

Since the last shutdown, the Friases say One Room — known for giant homemade cinnamon rolls and other baked goods — has found a groove with delivery service Door Dash, and their customer takeout business has steadied.

"I don't want to spend a couple hundred bucks more because they might shut it down again," John Frias said. "We're doing pretty well with the way it is; we're going to stick with it for now."

A local customer entering the establishment to pick up pastries on Jan. 26 said news of the lifted stay-at-home order will not alter the way he and his wife have been eating out.

"I'm retired so I've been staying home and running around getting stuff for my wife," he said, noting that they also do plenty of cooking at home. "It's not going to change our lifestyles much at all."

In Buellton, local retiree Jeff Dunstone who was enjoying breakfast in the sun at Ellen's Danish Pancake House on Jan. 26 said he will be back but wishes for a complete return to normalcy.

"I hope they open the inside, too," said Dunstone, noting the shutdown has been devastating to the economy, especially to local restaurants. "It should have never happened."

Servers were busy greeting patrons, checking on food orders and tending to a few diners enjoying their meals in the eatery's outdoor dining area, which is constructed of pitched PVC piping and large tarps that serve as windbreaks.

Restaurant owner John Oltman said that although he is glad to get back to serving their daily customers, he's also wary.

"We're very positive but it's fraught with financial danger," Oltman said. "Our suppliers are very tense and nervous. Of course, we are, too."

Ellen's has been serving comfort food for 60 years under just two owners, with Oltman being the second.

Ellen Hansen, who came from Denmark with her husband, Carlo, after World War II, opened Ellen's Danish Pancake Hus in Solvang in 1947, which was later relocated to Buellton.

Despite tough times, her thin Danish pancakes grew in popularity, according to Oltman, who bought the restaurant 30 years later.

"I bought it in 1980 with a handshake and a guarantee that I'd continue it," he said, looking over at his son, the chef. "I'd like for it to continue because he's got to have some way to make a living."

Nearly 30 Santa Ynez Valley restaurants are participating in the promotion which runs through Jan. 31. Pricing ranges from about $10 per person to $90, for a family-sized meal, with culinary offerings spanning the spectrum: from burgers to beef tartare, farm-fresh curry carrot soup to “pastrami spiced” cauliflower. Restaurants are choosing whether to run a “feeds one”, “two” or more platform, and are setting their own individual prices.

Suzanne Powell, a Santa Ynez Valley resident, said that after hearing the news, she called her hair stylist straight away.

"Celina is the best," said Powell, sitting in the chair while getting her hair blow-dried by hair stylist and owner of Lace and Leather Salon and Barbering in Solvang, Celina Roell. "You should have seen it when I first got here."

Powell said it had been since November that she was in for a color and cut and was elated to be back in the chair.

Roell explained that due to the ongoing health crisis, her business finances since 2020 have taken a 70% hit. On top of that, the salon lost 40% of its client base.

"We hope they come back," she said. "We'd love to reservice them."

When Roell received her cosmetology license over 20 years ago, she also spent a year being trained in proper sanitation, as well as state guidelines for disinfection and disease control.

"We've been practicing all these protocols for years," said Roell, noting that stylist were long ago mandated to use hospital grade sanitizer, and she will continue doing so.

"If it can kill HIV and tuberculosis, I think it's going to kill COVID," Roell said.

This will represent the first comprehensive update to the City of Solvang's general plan since its adoption in 1988.

Despite economic challenges posed by the ongoing health crisis, city taxes incurred by Lompoc's open-market cannabis industry — which go into the city's general fund that primarily funds police and fire — added a total of $983,000 in revenue in 2020, $533, 513 more than initial projections.

Two Santa Barbara County Sheriff's Office employees, including a patrol deputy, and one inmate have tested positive for COVID-19, according to…

"It's been a long-term goal of ours," said Alyce Barrick, "we just didn't know it would happen so soon, especially during a pandemic."

Staff members at One Room Coffee Shop in Lompoc bag baked goods for visiting customers and a Door Dash driver waiting to deliver an order on Jan. 26.

Celina Roell, owner of Lace and Leather Salon and Barbering in Solvang, blow-dries Suzanne Powell's hair after coloring and styling it on Jan. 26. 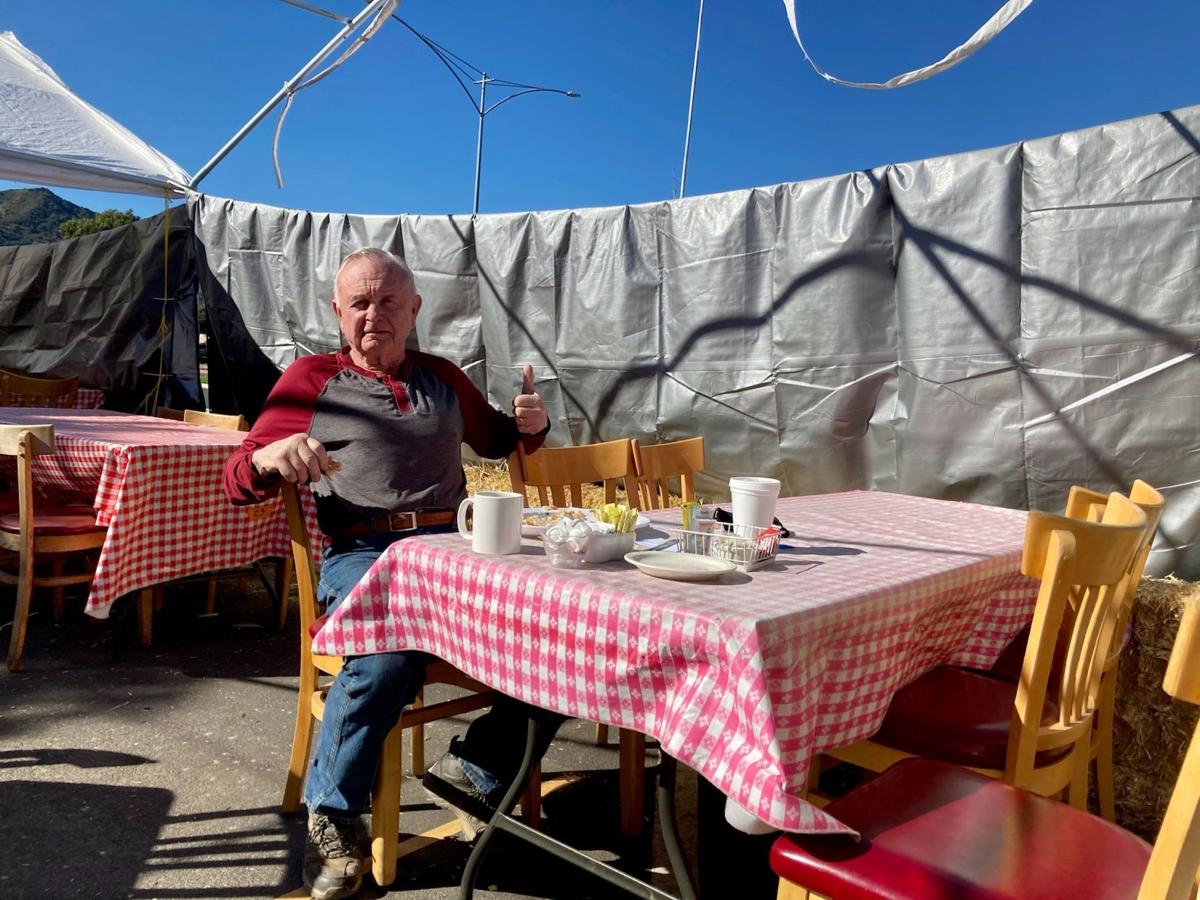