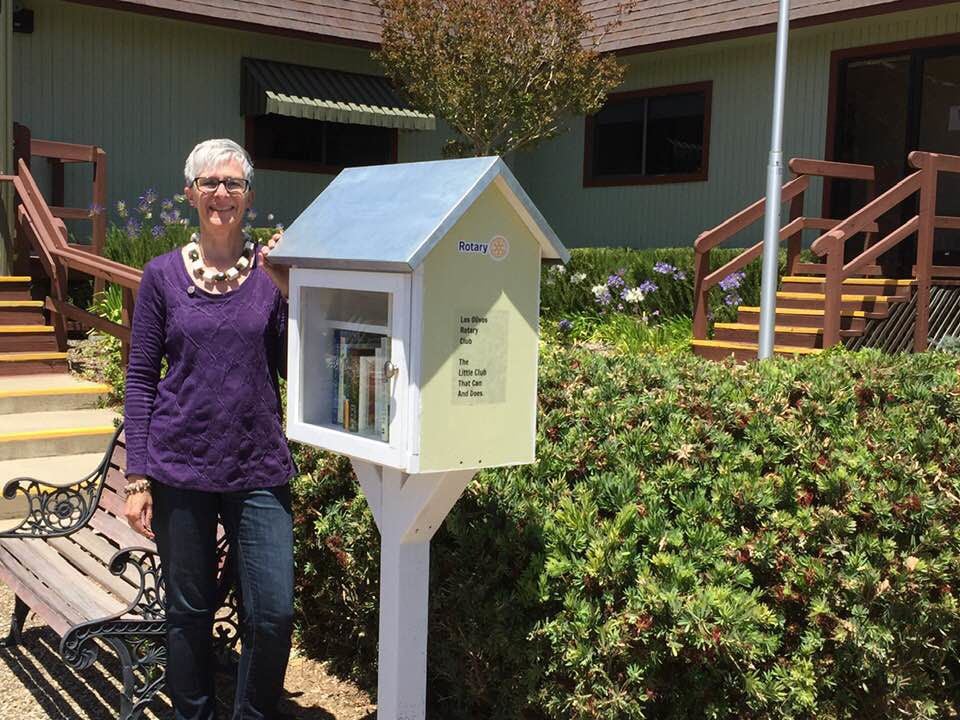 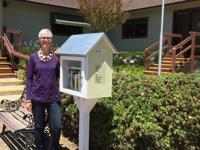 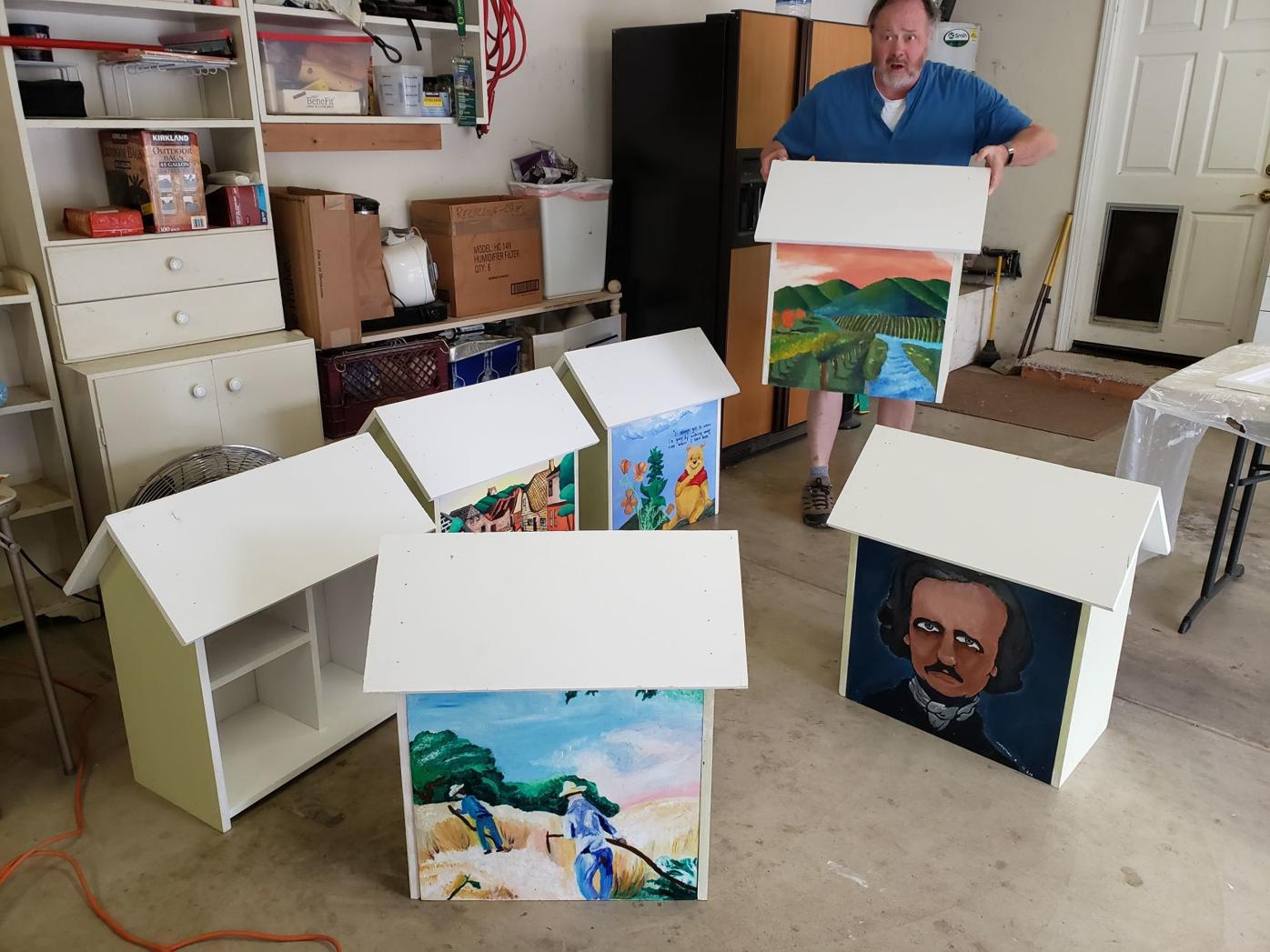 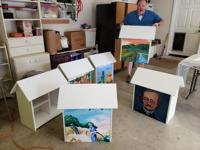 Los Olivos Rotarian Dave Bemis is pictured in his garage surrounded by a group of mini library boxes after the initial assembly efforts. 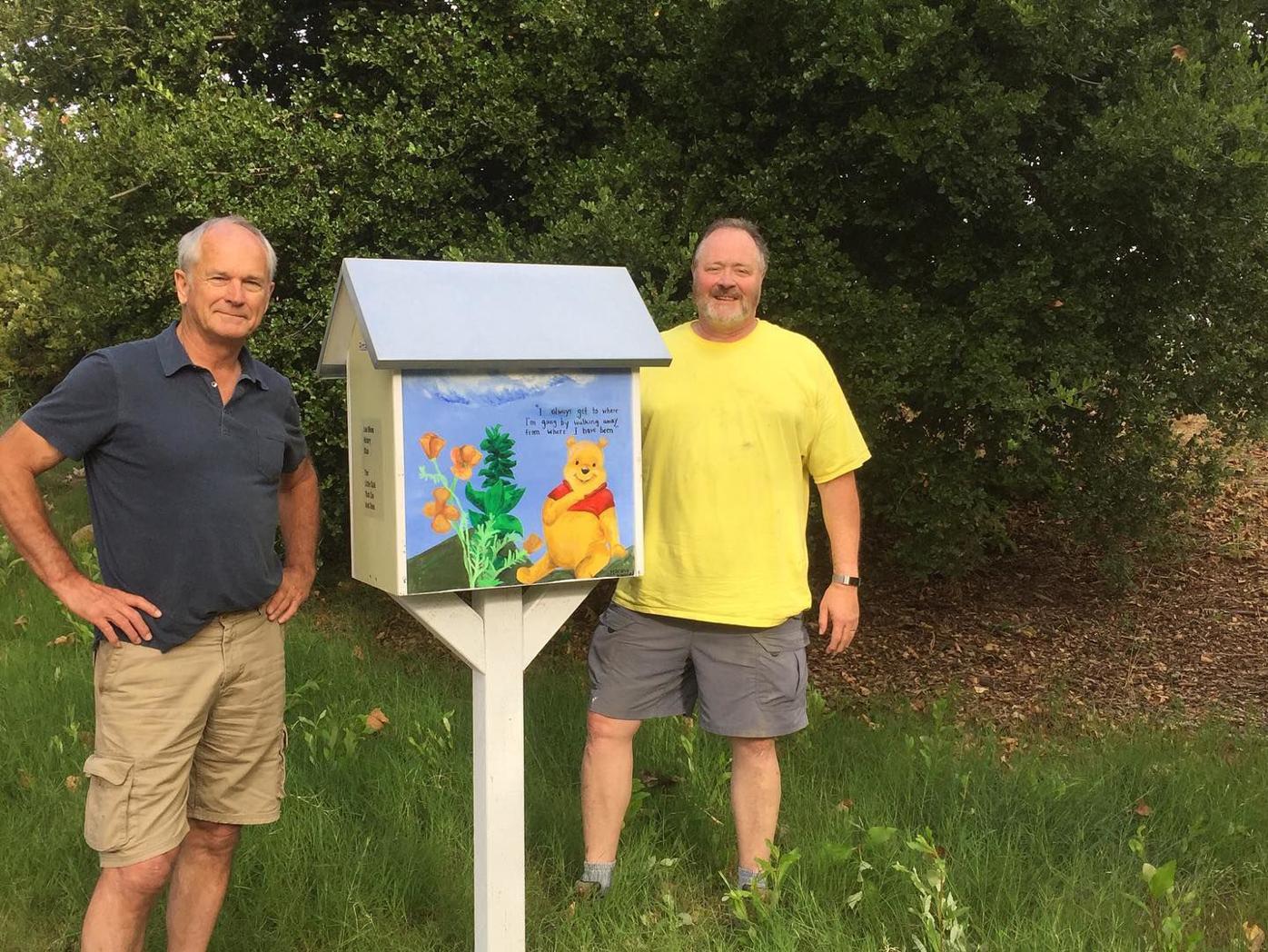 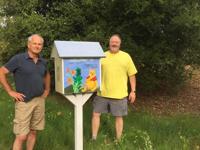 John Matthews, left, and Dave Bemis stand beside a Winnie the Pooh box installed at the Valley Botanic Garden.

Los Olivos Rotarian Dave Bemis is pictured in his garage surrounded by a group of mini library boxes after the initial assembly efforts.

John Matthews, left, and Dave Bemis stand beside a Winnie the Pooh box installed at the Valley Botanic Garden.

Thoughtfully placed throughout the Santa Ynez Valley, in spots where people gather and can easily access them are — no, not a winery — portals to new worlds: a slew of mini libraries, with their contents free of charge.

A library card is not required.

The Los Olivos Rotary Club has reported that their hand-built literary project has spread 15 times over since having finished installing more than a dozen “Little Free Libraries” around the Valley.

Thanks to the help of a retired carpenter, nearly two dozen teen artists, and a local business, according to Rotarian Stacey Otte, the community at-large now has an opportunity to take a book, pick a spot and read — anytime, anywhere.

The first of 15 locations to receive a library was the Solvang Senior Center.

Center Director Ellen Albertoni says since their little library was installed on July 1, it's been a hot topic.

"It's quite a conversation piece," Albertoni said, "our folks are really enjoying it. I love driving up to the center in the morning and seeing it."

So far little libraries have been placed at: the Solvang, Buellton and Los Alamos Senior Centers; Los Alamos Public Library; Zaca Preschool and the Botanic Garden in Buellton; Los Olivos School and St. Mark’s Church in Los Olivos; the YMCA in Santa Ynez; and the Creekside neighborhood in Solvang.

The idea behind the small wooden boxes shaped like little buildings and decorated with colorful paints and thoughtful designs, is to enhance a neighborhood by encouraging passerbys to “take a book and leave a book.”

Albertoni says despite having a library within the senior center and being located next to the Solvang Library, having the well-made book dispensary — which most appropriately has a picture of a windmill on its backside — is aesthetically appealing and convenient.

"We have books that are donated to us, so we've added to the little library in hopes that people will catch on," she said. "We were thrilled to be the first ones."

She says she got the idea from a national movement that was started in 2009 by the late Todd Bol in Hudson, Wisconsin.

Bol built and mounted a wooden box designed to look like a one-room schoolhouse on a post on his lawn and filled it with books as a tribute to his mother, a teacher and book lover who had then recently died, according to Canby.

Since then, his idea has filled scores of communities with a sea of books aimed at inspiring new generations of bibliophiles.

Canby says the local project was made possible with the help of several non-Rotarian community members as well.

Shacked up in Rotary member Dave Bemis' garage over the course of two weekends she explained, "Mogens Andersen of Solvang, a retired carpenter, worked with Rotarians to cut all the pieces for the boxes out of ¾-inch plywood, following plans downloaded from the Internet."

Led and mentored by Dr. Chris Elstner and local artists John Iwerks and Vidya Gauci, nearly two dozen teenagers from Santa Ynez Valley Teen Arts took the back panels for each library box and painted them with distinctive works of art.

"Some depict local scenery, and some are portraits of famous literary figures," Canby said. "Los Olivos Rotarians painted the other parts and assembled the libraries, and then AllStar Heating and Air Conditioning in Buellton made sheet-metal roofs to protect the libraries from the weather, donating all their labor and materials."

Many people know Lee Carroll as an easy-going CPA. But before he was crunching numbers, he learned attention to detail in the Army.  “I’m proud of it, but then I think anybody that does go around talking I was a Green Beret, then you kind of doubt what it is they really did.”