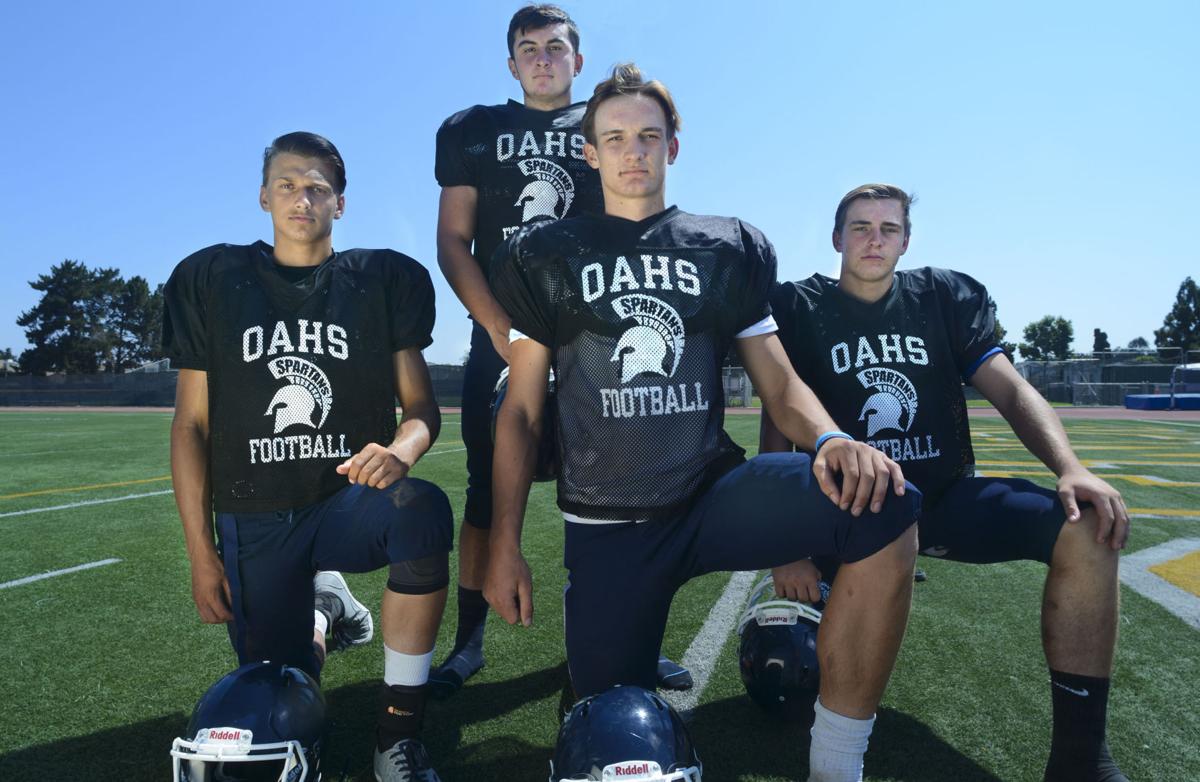 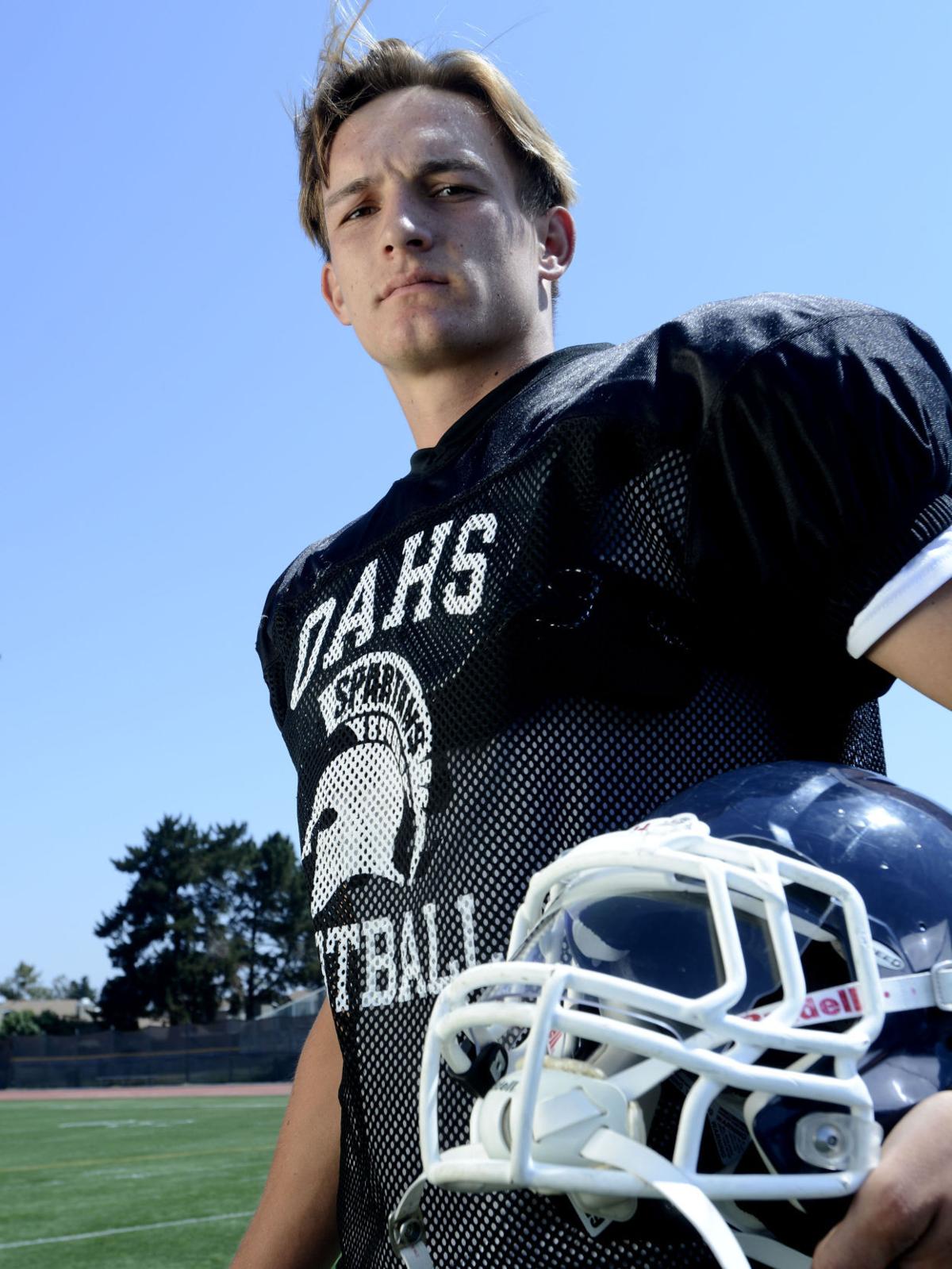 Orcutt Academy senior quarterback Darin Miller has led the Spartans to a 7-1 record and the No. 2 ranking in the CIF-SS 8-man Division 1 poll. Miller is hoping to play 11-man football at the college level next year.

In year two of the Doug May regime at Orcutt Academy, there are two tasks for the Spartans: Lead by example and lead each other past the rough preseason gauntlet that’s on the horizon.

May’s second Spartan team brings back many skill position standouts from 2016 and will be taking on these obstacles during the preseason slate: La Canada Flintridge Prep, Mojave, Moreno Valley Riverside County Education Academy, Canoga Park Faith Baptist and Cate – all of which were CIF Southern Section Division I playoff teams in the 8-man realm last season, with Mojave entering this season as the defending CIF champion.

May isn’t sweating the competition that lies ahead.

“I’m really confident that we’re going to do well enough not just in our league, but in our preseason as well,” May said during the Lee Central Coast News Media Day on Aug. 5. “In our preseason, we have four teams that are in the top five of 8-man football in the Southern Section – so we’re playing some tough teams.”

May, who had to adjust to the faster 8-man play last season after years of coaching 11-man football, says he has a more experienced and positive group of Spartans in Old Town Orcutt.

“There are a lot of positive views going on,” May said. “Being a second-year coach, I don’t have that excuse of rookie coach anymore. It’s time to take care of business. These guys have been playing really hard, they get behind each other and I’m very lucky to coach these kids.”

May has started to see a steady increase in participation numbers for Spartans football. Last year’s team fielded 30 players during the 5-5 season. This year’s team has 34 bodies in shoulder pads and helmet. May loves the fact that he’ll have plenty of depth on the sidelines this fall after being stung with the injury bug last season.

“We had some adversity with some key injuries – which put us behind last season,” May said. “A 5-5 season is considered mediocre, but for us it was good because there were some teams we played where we right there with them in several games. This year, with some of the seniors, they get it. They’re stepping up as team leaders and they coach guys up. They know they’ve got to step it up.”

May has been banking heavily on his returning quarterback Darin Miller for both his leadership and his explosive play-making ability. As a dual-threat passer, the returning senior combined for 24 touchdowns running and throwing in six games last year. Miller knows he’s one of the Spartans who is taking on a leadership initiative.

“Now that we’re seniors, it’s a different feeling from freshman to junior year because there’s no one over us,” Miller said. “Now we’ve got to step up and show the young guys how it’s done.”

Miller adds that he and the rest of the returning Orcutt Academy players have grown comfortable with May and his staff – even adding some new wrinkles to its already high-powered offense that scored 41 total touchdowns in 2016.

“It’s definitely been a lot of work with the offense with getting new plays in. We also have been adding new formations and have new players trying out for new positions,” Miller said. “But we’re more comfortable with the new staff. We’re set in and ready to go.”

His lead blocker Alex Andrade, who also plays the “Mike” linebacker, said the chemistry at the OAHS practice field has improved in May’s second go-round.

“We’re definitely doing a lot more building this year,” Andrade said. “He’s thrown a bunch of whole new stuff in this year. He even said it himself that last year that he screwed up multiple times, but so did we.”

Andrade also likes the depth and improving numbers for Spartans football, saying: “Now we have more secondary guys. Now we’ve got guys who need to step up and get the job done. It’s been a lot of fun and a lot of work. We’re excited to get the season going.”

Miller and Andrade will serve as key cornerstones of the Spartan offense. Outside of them, OAHS has a deep backfield returning with Jared Sutton and Ben Luna-Vasquez returning. At wide receiver, the Spartans have welcomed Valley Christian Academy transfer Aiden Heller.

In the end, May likes the rugged preseason tests that lie ahead – and believes his team is ready for the challenge.

“I’m excited we’re playing these games,” May said. “We’ve got to travel, but it is part of the game and we’ve got to find some teams that are solid.”

Base offense: I-Formation with slot receivers

Orcutt Academy senior quarterback Darin Miller has led the Spartans to a 7-1 record and the No. 2 ranking in the CIF-SS 8-man Division 1 poll. Miller is hoping to play 11-man football at the college level next year.