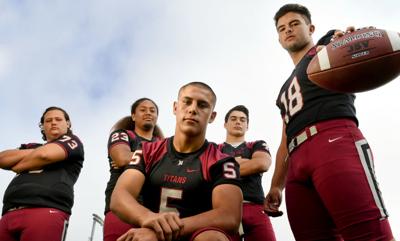 Veteran coach Tony Dodge has said his 2019 Nipomo team, though it has a lot of familiar faces back, will be doing some new things on both sides of the ball.

The Titans are hoping they will get to play on their new field reasonably soon.

Delays have put the construction of Nipomo's new stadium behind schedule. The Titans will play their Aug. 30 home opener against Cabrillo at San Luis Obispo High School.

"They're still saying the Sept. 13 game against Bishop Diego as the first game on the new field," said Dodge. "But there's no sod yet. That's starting to be an issue, right?"

Veteran coach Tony Dodge has said his 2019 Nipomo team, though it has a lot of familiar faces back, will be doing some new things on both side…

Junior linebacker-running back Keyshawn Pu'a, another returning two-time All-Leaguer for the Titans, said, "I don't really notice the difference," when it comes to stadiums.

"Football is football. You just go out and play."

Nipomo is coming off an 8-3 2018. The Titans won the inaugural Ocean League championship but went out in the first round of the playoffs in their first year in the CIF Central Section.

The Titans lost some key players from that squad, including their leading rusher, Ricky Iniguez, to graduation. Still, Dodge, Garza and Pu'a sounded confident about the upcoming season.

"We've got some new wrinkles, some new people, players stepping up. I like it," said Garza.

One of those new people is running back-strong safety Zach Plunk, a 5-foot-10, 190-pound senior transfer from Arizona.

"He's really going to be an exciting running back to watch," said Dodge.

"Erik was the head coach at Irvine for the last 10 years," said Dodge. "He'll help with our offense. He's going to be tremendous."

Terry resigned as Irvine's head coach earlier this year, telling OC Sports Zone that he wanted to move with his family to Central California to be closer to his parents.

Dodge said at press time that 6-foot-3, 235 pound senior Brayden Groshart will be the Titans' starting quarterback for the third straight year. However, "You could also see Brayden some at running back," said Dodge.

Nipomo will be in a new league, the PAC 4 League, this year along with Pioneer Valley, San Luis Obispo and Atascadero.

Dodge said before his team moved from the CIF Southern Section to the Central section last year that he wasn't particularly thrilled with the upcoming move.

2019 Football Preview: Keyshawn Pu'a is one of the most versatile players on the Central Coast

He said he was happier with the move now, though he was not sold on his team being placed in Division 2.

"We were not placed properly," Dodge said. "With the size of our school, we do not belong there. But we compete there."

Tony Dodge enters his fifth year as the Titans' head coach. His teams have won two league championships and have been a league runner-up twice. Nipomo won the inaugural Ocean League championship in 2018. Dodge's teams have a combined 25-21 record. The Titans will try to make a playoff run this year after going out in the first round each of the past three seasons. Dodge guided Nipomo to the CIF Southern Section divisional semifinals his first year as coach.

Zach Plunk (RB-SS) is a senior transfer from Arizona. Nipomo coach Tony Dodge is counting on him to be a big addition, especially carrying the football.

Npomo edged Pioneer valley 14-13 for the Ocean League championship last year, and the teams will be PAC 4 League rivals this year.

More in Collection: 2019 High School Football - See all of our season previews, power rankings and player profiles right here! (3 of 17)

Week Zero — yes the football season starts on week "zero" — is kicking off Friday. To prepare you for the action, we released our special high…

Football is finally here. So that means we have our Week Predictions and Power Rankings.

The 2019 Pioneer Valley football team has a new offense, a new defense, a new coach and is in a new league.

The Santa Ynez Pirates staged a late rally but fell just short against the Nipomo Titans. Nipomo stopped a Santa Ynez two-point conversion attempt that would have tied the game with 38 seconds left and the Titans held on for a 23-21 victory in Friday night’s Week Zero football season-opener. 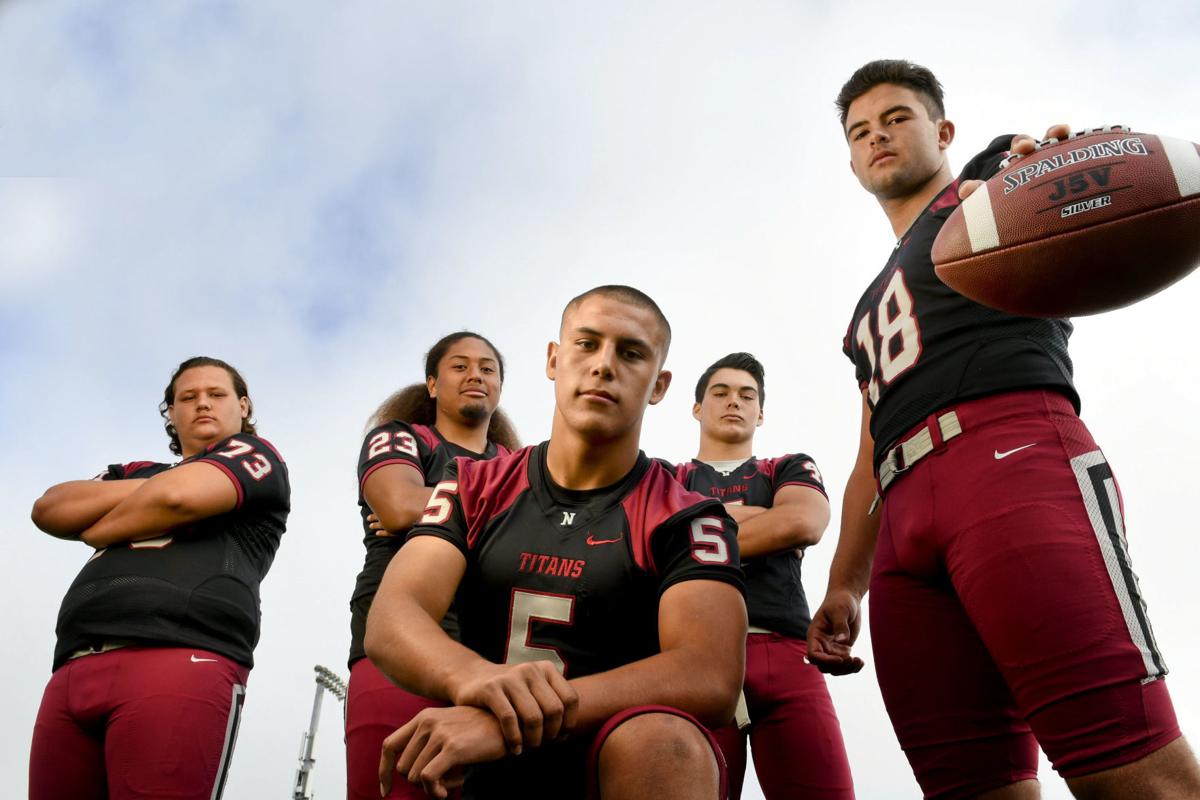 Nipomo High School's, from left, Oscar Andersen, Keyshawn Pu'a, Jesse Garza, Nicholas Dostal and Brayden Groshart are eyeing another league title in 2019. Can they also make a playoff run this time around? 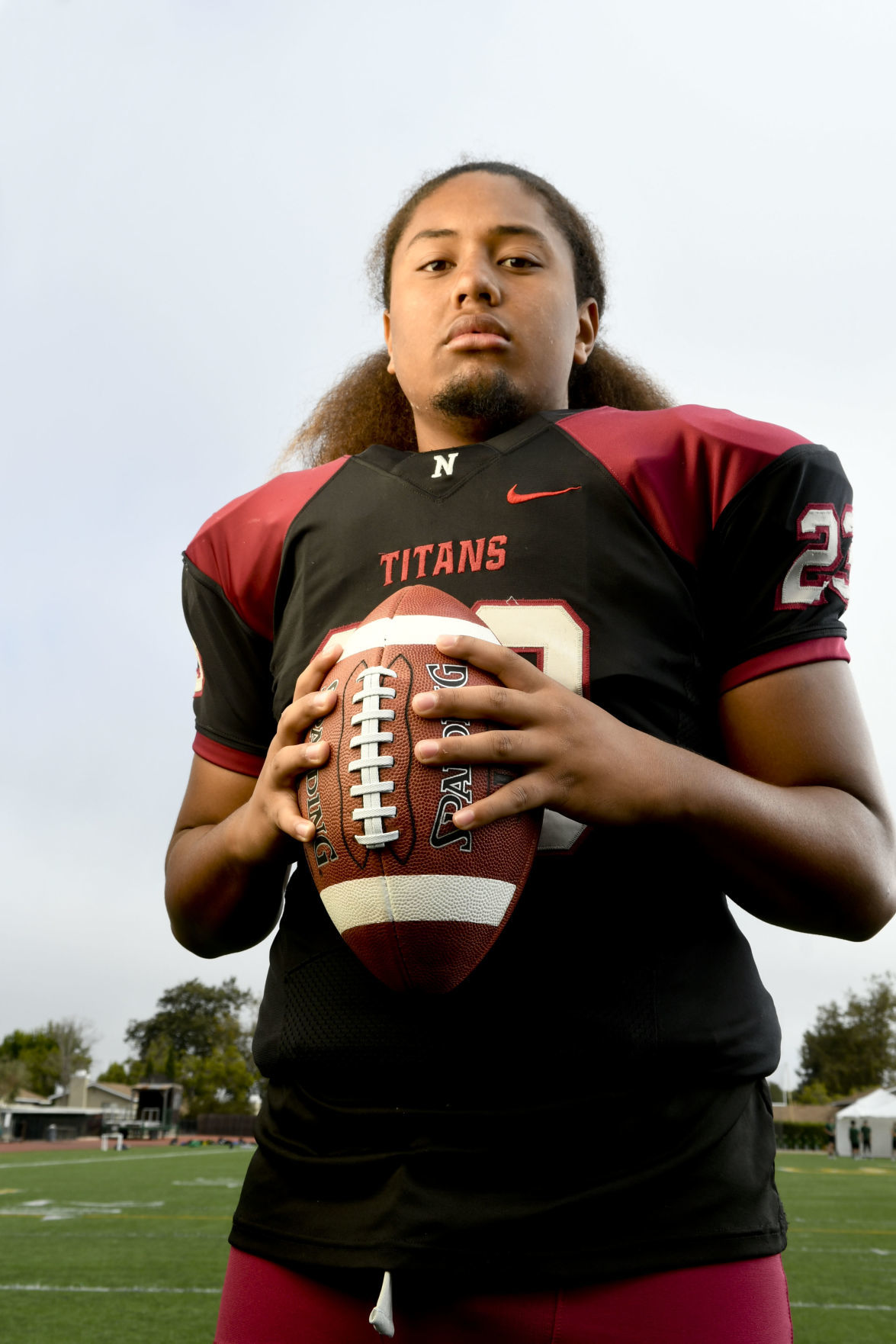 Keyshawn Pu'a is a running back. He's also a linebacker. The 6-foot-1, 225-pound junior will try to do it all for the Titans as they look to improve on their 8-3 record from a year ago.