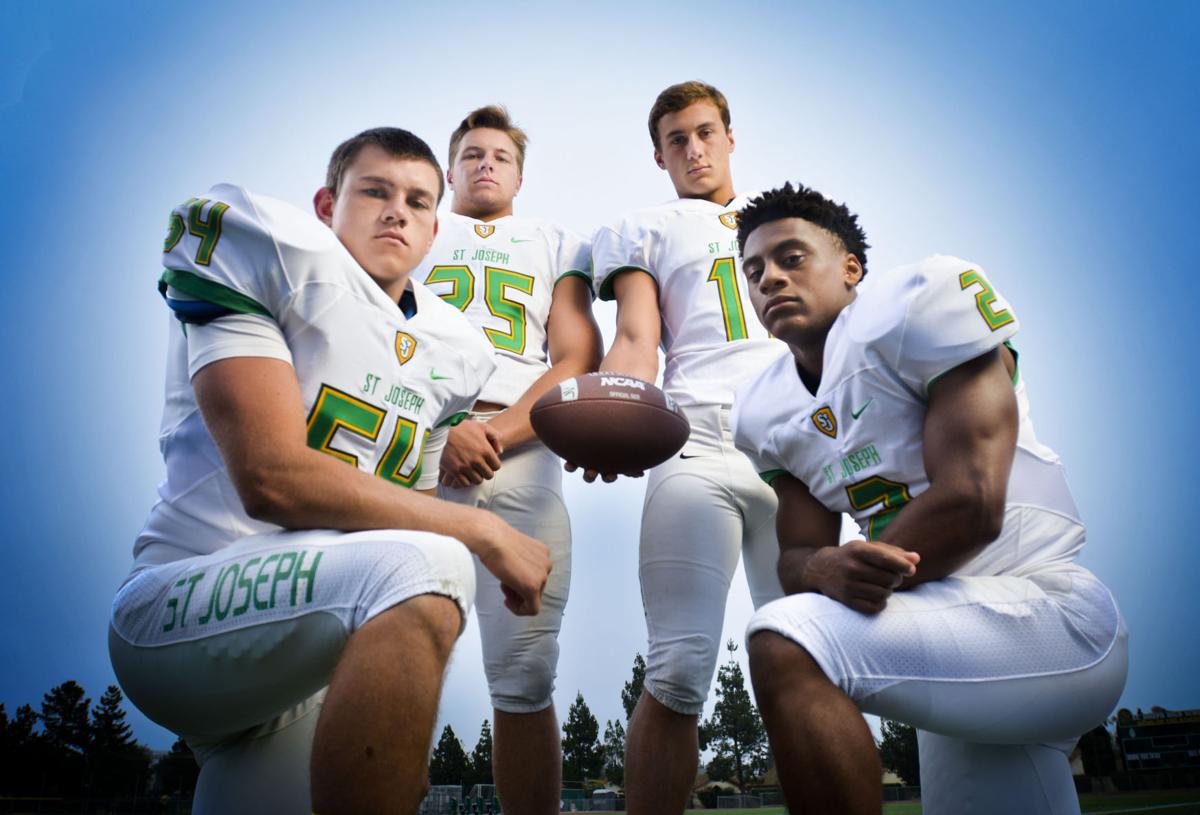 St. Joseph football players, front row, Steelee Morgan and Kaleb Monette, with Fenton Will and CJ Cole, back row, will try to lead the Knights to the CIF quarterfinals for the third year in a row. 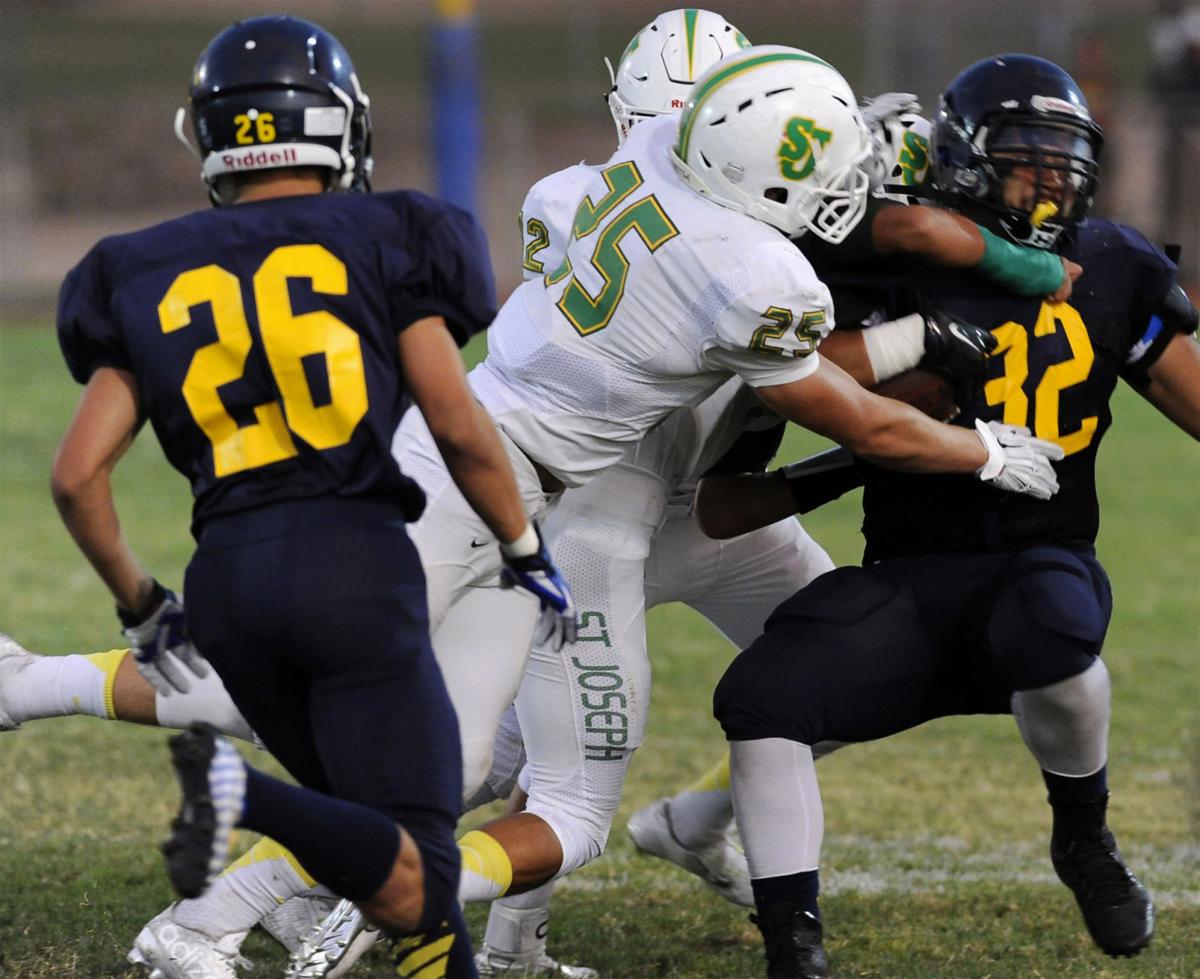 St. Joseph's Fenton Will (25) wraps up Arroyo Grande's Joey DeLaRosa during a game in 2015.

In four seasons as the Knights' coach Dustin Davis is 31-15.

That's quite an incredible mark, one that stands out even more when all things are considered.

The Knights were in the PAC 7 League when Davis first got there. He then guided them to a PAC 7 championship. They've also made the quarterfinals of the Southern Section playoffs the past two years, losing to eventual champion Camarillo there in 2015.

Davis' Knights are 6-2 since moving in the Los Padres League two years ago, their only losses coming to Lompoc.

So it's clear: The Knights, one of the smaller schools in the area and Southern Section, don't go through rebuilding processes. There aren't many valleys in the history of St. Joseph football.

That history is filled with mostly peaks.

So don't expect the Knights to struggle in 2016, even though they've lost a number of key players, like star QB Blake Jaeckels — who accounted for 68 touchdowns (throwing for 48 and running for 20) the past two years — and have an incredibly difficult schedule ahead.

Linebacker Fenton Will is ready for that early-season challenge.

"We feel pretty confident in what we can do," Will said. "Notre Dame is a really good team and we are really looking forward to showing everybody what we can do."

Will said the Knights have about 17 seniors on this year's squad.

The Knights will also be without stud playmaker Joe Guzman, who graduated. But they aren't lacking in guys who will make plays.

Justin Wong had a big sophomore season in 2015 and his coaches expect even bigger things out of him this year after he shot up over the summer, now standing over 6 feet.

Biely was a big-play threat for the Knights last year, racking up 398 yards on only 16 catches with 5 TDs. That's about 25 yards per catch.

But if you make a claim that Cole is the most explosive player on the Central Coast, nobody is going to argue with you. What's interesting about Cole heading into the 2016 season is that he may not see a whole lot of time at receiver.

He's going to be spending most of that playing time, at least at the start of the season, at quarterback. That's right, the Davis is putting the most explosive player in the area at QB.

Cole had tremendous sophomore and junior seasons catching the ball. Last year he racked up 950 receiving yards on 64 receptions with 11 TDs. He also carried the ball 18 times for 139 yards in 2015.

St. Joseph sophomore Dino Maldonado is also in the mix at quarterback. Davis said he's open to a two-quarterback system, the player that produces the seeing more of the field.

Davis added that two priorities in the summer have been the Knights' quick passing game and their intermediate passing game. The quick-hit passing game will keep pressure off the Knight's new QB.

Jaeckels, running the same offense, rushed for 1,400 yards the last two years. So Davis clearly loves an athletic quarterback and Cole's ability to make plays fits in perfectly with the Knights' explosive offense.

But enough about that side of the ball, the Knights' defense looks a bit different, but still pretty good.

Will just might be the top defensive player in the LPL, although Lompoc has a pretty good one as well. The Knights host the Braves on Oct. 28, and that one will feature two tremendous linebackers in Will and Toa Taua.

Will has reportedly committed to play ball for Cal Poly and may be joined by Cole with the Mustangs next year. That Lompoc-St. Joe game will also likely determine the LPL champion, like it has the past two years.

The Knights are now in Division 5, with Lompoc sitting in Division 4, meaning a playoff matchup is impossible. In fact, St. Joseph won't play any Central Coast teams in the playoffs as the Knights are the only local squad in their division.

Davis is open to the new groupings and seemed more than ready to take another challenge head on.

Base offense: No huddle spread.

LB: Zach Morris*, Fenton Will*, Clay Will, Will Sorheim.

2016 Kickoff: Knights ready for the challenge

St. Joseph football players, front row, Steelee Morgan and Kaleb Monette, with Fenton Will and CJ Cole, back row, will try to lead the Knights to the CIF quarterfinals for the third year in a row.

St. Joseph's Fenton Will (25) wraps up Arroyo Grande's Joey DeLaRosa during a game in 2015.