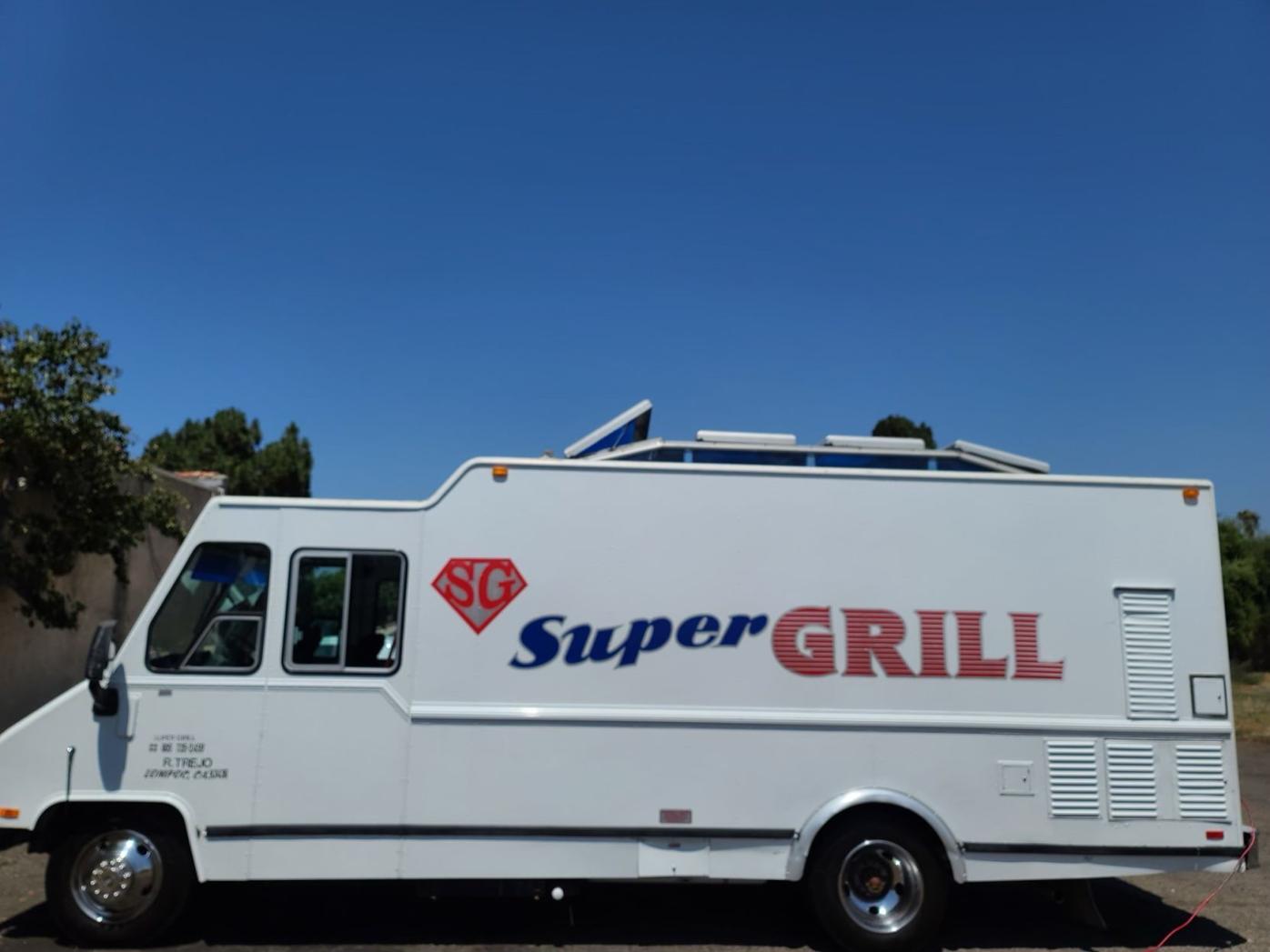 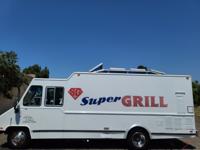 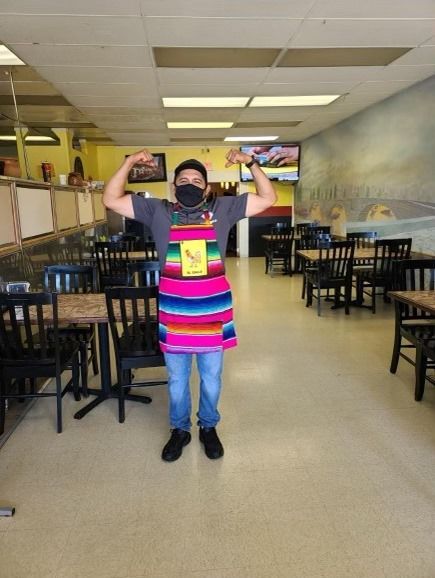 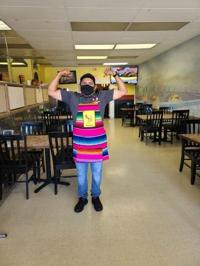 Jose Trejo of Super Grill #1 shows off his muscles at his Lompoc-based restaurant, located at 910 North H Street, which he and his staff run along with the Super Grill food truck. 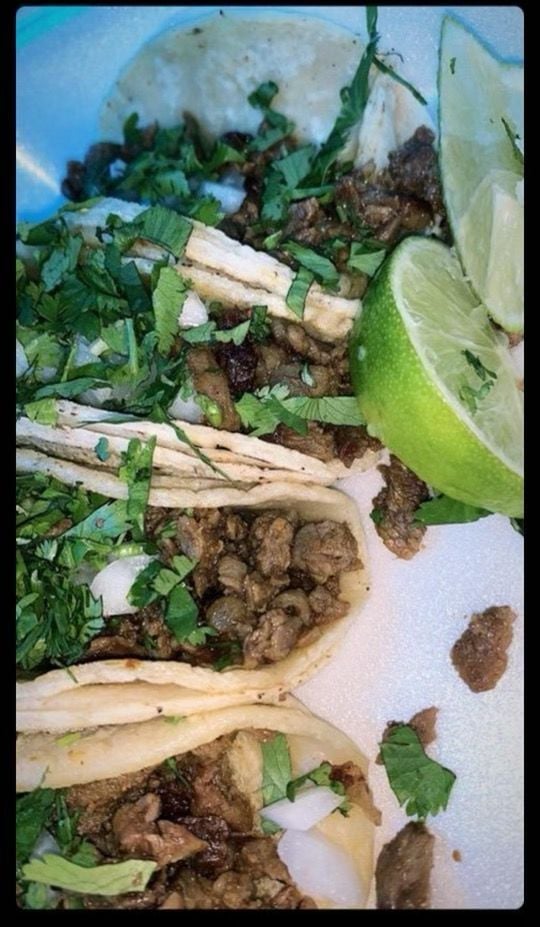 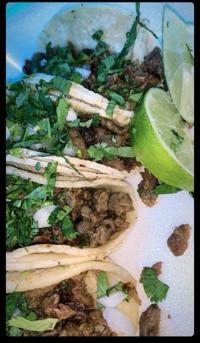 This article is the second in a series of three on the Central Coast food truck scene. Each article will highlight a different local food truck and some background on its chef and cuisine. Hopefully, these stories will inspire you to get out and explore some of what our local dining scene has to offer.

Trejo is a living example of the American dream. He arrived in the United States from Michoacán, Mexico, at the tender age of 5. Influenced by his parents’ example, he is no stranger to hard work. Trejo spent his high school summers working in the asparagus fields in Lompoc. Finding the long days in the field “way too hot,” he was determined to find another way to earn a living. Watching his parents struggle fueled his motivation to run his own business one day.

At 16, he became a dishwasher for the original Saletti’s restaurant in Lompoc, and his hard work eventually earned him a position as a cook. This is where he learned the intricacies of the food industry.

After stints at UPS and the local Foodbank, Trejo found himself at a crossroads: He could either take his savings and buy the bright shiny Cadillac Escalade he’d been eyeing or fulfill his other dream to buy a food truck and start his own business. He wisely chose the food truck — no, it didn’t come with fancy 24-inch rims and good looks — and he hasn't looked back on his decision. While continuing his jobs at UPS and the Foodbank during the day, Trejo put on his chef's hat in the evening, cooking and serving from his rig.

Exhausting 15- and 16-hour workdays were the norm, and he eventually shed the other jobs to focus his energy on his mobile food business.

Trejo originally partnered with his cousin, Miguel, who had more skill in Mexican cooking and showed Trejo the taco ropes. (Tacos are the Super Grill truck's featured item). Trejo's mom and aunt have been the influence for the flavorful salsa recipes and the homemade marinades. The marinades make the difference in Super Grill's savory tacos and tortas, which Trejo credits to the highly revered guidance of his mom and aunt.

As with many businesses, Super Grill was challenged by COVID, but Trejo and his team managed like pros during the pandemic. When Trejo speaks of his staff, he flashes an ear-to-ear smile. He and his team continued to serve customers and did not have to lay off any employees.

While serving community is Trejo's mantra, the pandemic provided he and his staff with the opportunity to show their appreciation and support. Super Grill provided free meals to first responders, hospital staff and members of the community.

Some of the struggles stemming from the pandemic have been supply chain issues and the hard-to-come-by popular item — Mexican-made Coca-Cola. Other than that, Trejo said, Super Grill has been able to make it all work.

In addition to the food truck, Super Grill #1 still operates a restaurant at 910 North H St. in Lompoc and offers catering.

Now let’s talk about the food: goodness! The plan was to just sample a few of his most popular menu items, but it turned into kind of a feast. Trejo enthusiastically ran back and forth to the kitchen offering a new dish each time, starting with carne asada, carne asada and shrimp, then lengua (beef tongue) tacos.

I must confess, I was a little hesitant to try the lengua, but duty called. It turns out, that it was very tender and flavorful. Who knew?

Next up was the carne asada quesadilla, followed by carne asada fries, which is carne asada with cheese sauce on top of crinkly fries. They were beyond wonderful, and I must say, the most creative use of crinkle fries I’ve seen or tasted. Not to mention, it's probably the only time I've felt like an adult while eating crinkle fries. What is it about those crinkle fries? Maybe it's the little crevices for all of the good stuff to hang out.

All the dishes were wonderful, but my favorite, hands-down, was the torta with chorizo and carne asada. It was the best I have ever tasted! It was served on a perfectly toasted soft bolillo roll. There was no shortage of grilled onions (a life force) on the side, tangy sliced radishes and several types of salsas.

It would be a disservice to try and describe each and every glorious bite of this food extravaganza. Everything from the tacos to quesadilla to the fries were perfection. These robust flavors hit all of the notes, and will bring you back for more (shhhh … don’t tell, I went back today for lunch!).

Trejo continues to carve out his own version of the American dream: He married the woman of his dreams just a few years ago in a romantic destination wedding, and continues to serves his community and grow his business by also offering to cater for events with up to 200 guests.

Trejo says traveling the world in retirement is in his future. But for now, he is happy to be serving up some of the best food on the Central Coast. You owe it to yourself to give Super Grill a try. You won’t be disappointed, and you may even learn to love lengua.

This time of year I become tearfully sentimental over the memories and myriad of family photos relating to these special times growing up in Santa Barbara...

As a Pisces, my mother has an affinity for fish dishes from the river to the ocean. One way I'll honor her this year is to make one of her favorite dishes: Pescado Veracruz.

Karen Ortiz is a lifelong Santa Barbara County resident, born in Santa Barbara and currently residing in the Lompoc Valley. With culinary roots reaching back generations, Karen passionately explores recipes, flavors and spices from her Latino ancestors, and combs the globe for new and exciting dishes. For more delicious recipes, follow Karen's Facebook page at LatinaFresh. She can be reached at latinafreshsb@gmail.com