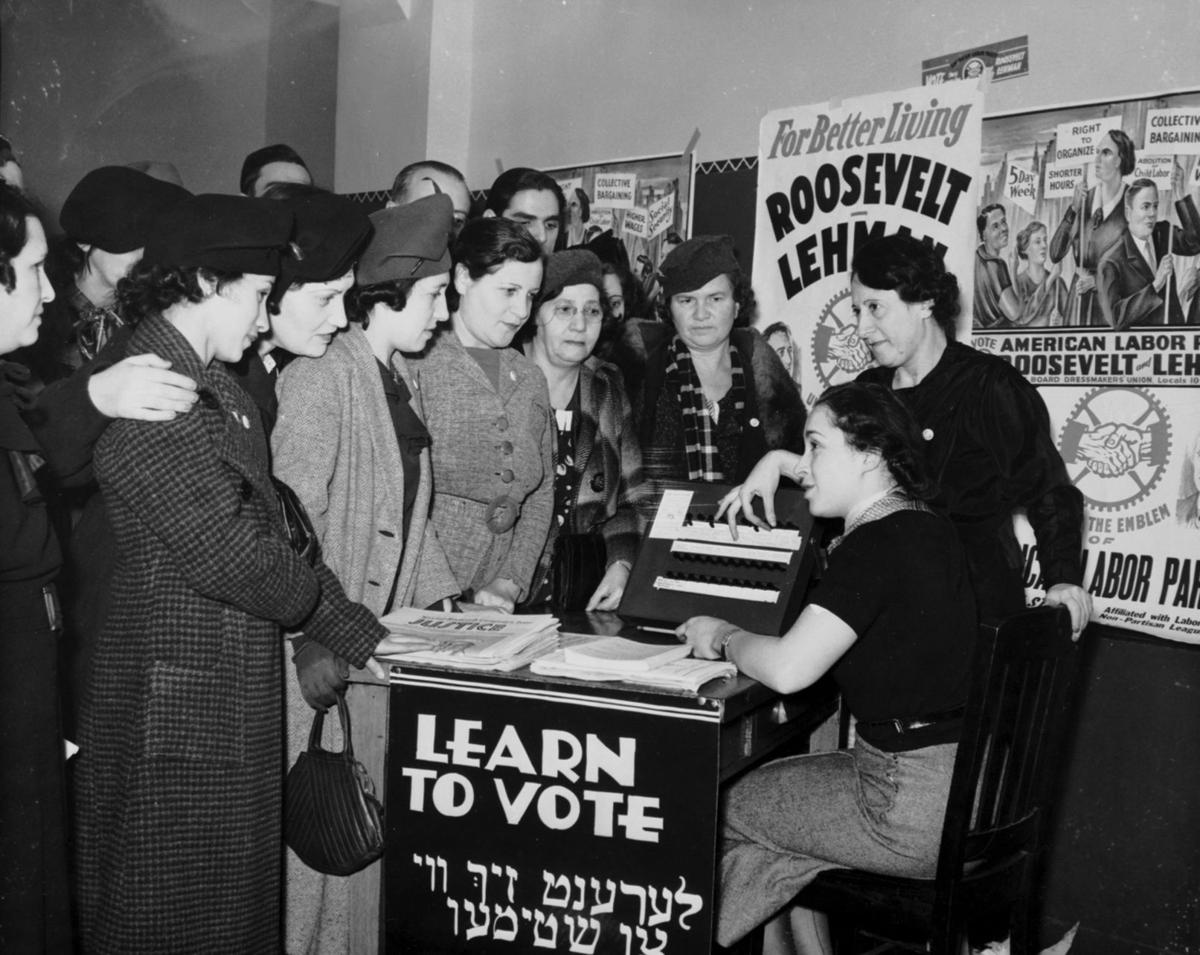 Women, surrounded by posters in English and Yiddish supporting Franklin D. Roosevelt, Herbert H. Lehman and the American Labor Party, teach other women how to vote in 1935.

With the election just a couple of weeks away, and this election being the 100th anniversary of the 19th Amendment giving women the right to vote, I thought I would interrupt my series on wildfires in Santa Barbara County and provide a brief history of voting rights in the U.S.

In my research, I found even some white men did not have the right to vote.

Initially, the U.S. Constitution gave each state the power to set voting requirements. And early on, some states ruled that only white men who owned property or paid taxes could vote — only about 6% of the population.

By 1828 this had changed, and all white men who were citizens could vote.

In the 1840 election, 80% of white males voted as attitudes had shifted in favor of universal white male suffrage. Of course, minority men (Black, Asian, Native American, etc.) and all women were still denied the right to vote.

The campaign for women’s suffrage began decades before the Civil War. During the 1820s and '30s, most states had given all white men the right to vote, regardless of how much money or property they had. At this same time, many reform groups were organized by women across the United States — temperance leagues (no alcoholic drink), religious movements, moral reform societies and anti-slavery organizations.

Many American women were beginning to rail against the “Cult of True Womanhood”, that is, the idea that the only “true” woman was a pious, submissive wife and mother concerned exclusively with home and family. Put together, all these movements introduced a new way of thinking about what it meant to be a woman and a citizen of the United States.

In 1848, a group of abolitionist activists — mostly women, but some men — gathered in Seneca Falls, New York, to discuss the problem of women's rights. Reformers Elizabeth Cady Stanton and Lucretia Mott were the main organizers of the convention.

Attendees will witness Blatch at the time of the final state vote on the 19th Amendment in August of 1920.

Most of the delegates to the Seneca Falls Convention agreed that American women deserved their own political identities: “We hold these truths to be self-evident,” proclaimed the Declaration of Sentiments that the delegates produced, and, “that all men and women are created equal, that they are endowed by their creator with certain inalienable rights, that among these are life, liberty and the pursuit of happiness.”

What this meant, among other things, was that they believed women should have the right to vote.

During the 1850s, the women's rights movement gathered steam but lost momentum when the Civil War began. Almost immediately after the war ended, the 14th and 15th amendments to the Constitution raised familiar questions of suffrage and citizenship.

Some women took advantage of this and allied with racist Southerners who argued that women's votes could neutralize the male African American voice. (Note: I am not sure what they thought about Black women’s vote.)

In honor of the 100th anniversary of women gaining the right to vote, Friends of the Library of the Santa Ynez Valley is hosting an online presentation titled "My Mother's Dream, My Daughter's Hope" at 2 p.m. Saturday, Oct. 17.

The program features the daughter of Elizabeth Cady Stanton, who was a pioneer of the quest to gain women’s right to vote.

This online event is a fundraiser, so a donation ($25 is suggested) is required to receive the event link. To donate and receive the link, go to FriendsSYVLibrary.org/give

In 1869, a new group called the National Woman Suffrage Association was founded by Elizabeth Cady Stanton and Susan B. Anthony. They began to fight for a universal-suffrage amendment to the U.S. Constitution.

This pro-15th-Amendment faction formed a group called the American Woman Suffrage Association and fought for the franchise on a state-by-state basis. Many states allowed women to vote as encouragement to move West.

The United Campaign for Suffrage

The racial division between the two groups eventually faded, and in 1890 they merged to form the National American Woman Suffrage Association. Elizabeth Cady Stanton was the organization’s first president. This new organization argued that women deserved the vote not only because they were equal to men but also because they could make the country a purer, more moral and kinder commonwealth.

This argument served many political agendas: Religious and temperance (no alcoholic drink) groups wanted women to have the vote because they thought it would mobilize an enormous voting bloc on behalf of their causes. Also, many middle class white people were swayed once again by the view that the inclusion of white women would "ensure immediate and durable white supremacy, honestly attained."

At Last A National Law

Even though many Western states gave women the right to vote, Southern and Eastern states did not.

In 1916, NAWSA president Carrie Chapman Catt unveiled what she called a "Winning Plan" to get the vote at last: a blitz campaign that mobilized state and local suffrage organizations all over the country, with particular focus on those states still resisting.

Alice Paul then founded the National Women’s Party and advocated for more radical, militant tactics such as hunger strikes and White House pickets.

Elizabeth Cady Stanton and Susan B. Anthony, circa 1870.

World War I slowed the suffragists' campaign but helped their argument nonetheless: Women's work on behalf of the war effort proved that they were just as patriotic and deserving of citizenship as men.

On Nov. 2 of that year, more than 8 million additional women across the United States were able to vote for the first time. (Note: The wording of the 1920 amendment was precisely the same as the wording for the 1878 Women's Suffrage Amendment, which was proposed in the U.S. Congress 42 years earlier.)

Still, Work to Be Done

Even with the passage of the 19th Amendment, not all people had the right to vote. It was not until 1924 that all Native Americans were granted citizenship and, therefore, the right to vote. Chinese immigrants did not get the right to citizenship and voting until 1943. And it took the Voting Right Act of 1965 to help people of color to gain equal voting rights, and still today, that is not always the case in many states.

Democracy demands the involvement of its citizens. Get informed on the candidates and propositions in this upcoming election. Your right to vote has been hard-earned. Let your voice be heard.

What you need to know: A look back at this week's top headlines

Madison said that her goal moving forward is to donate a box of crayons to inner city schools with each purchase of Madi’s Treasure Box crayons, which are set to be released in November.

Women, surrounded by posters in English and Yiddish supporting Franklin D. Roosevelt, Herbert H. Lehman and the American Labor Party, teach other women how to vote in 1935. 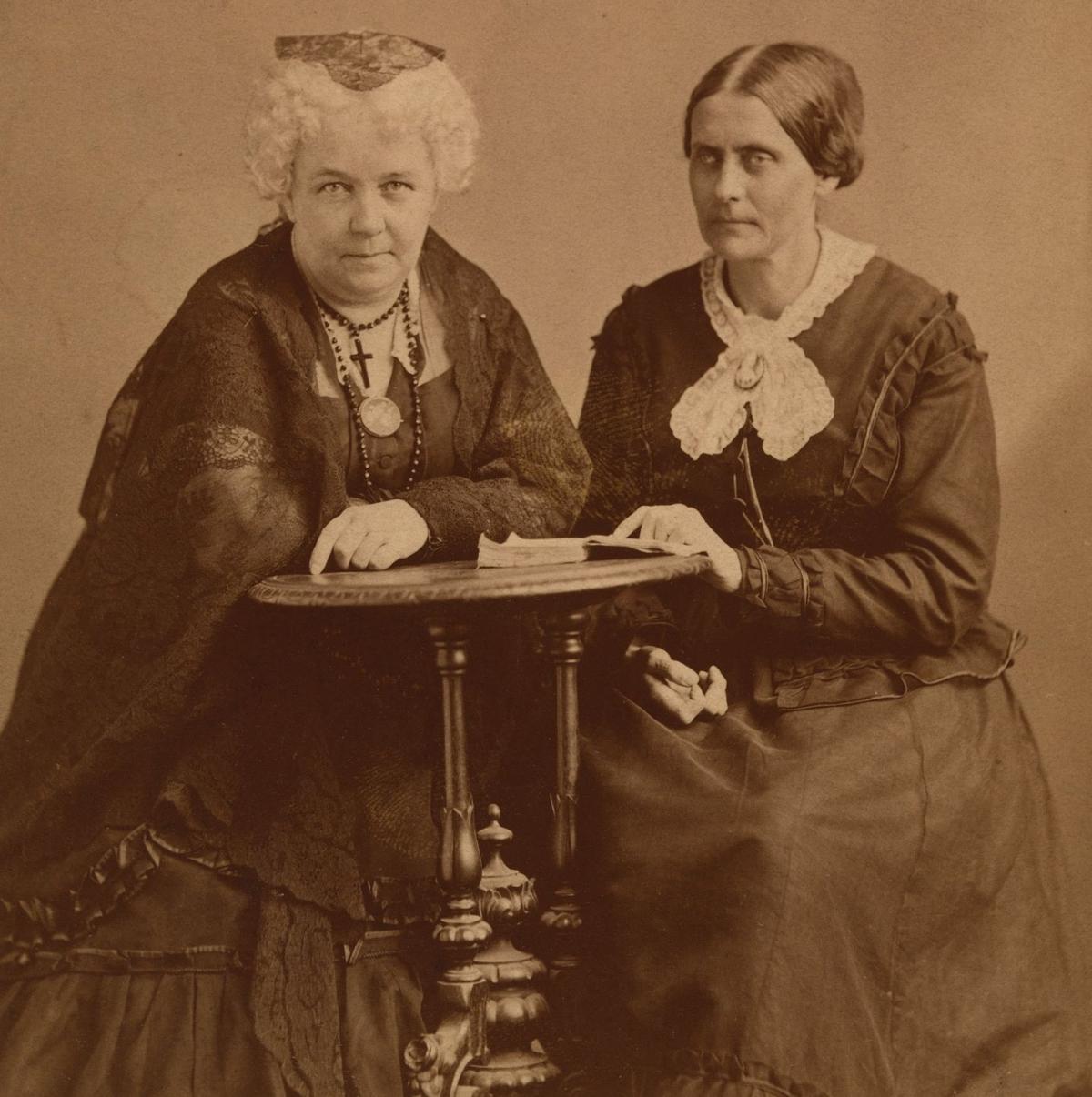 Elizabeth Cady Stanton and Susan B. Anthony, circa 1870. 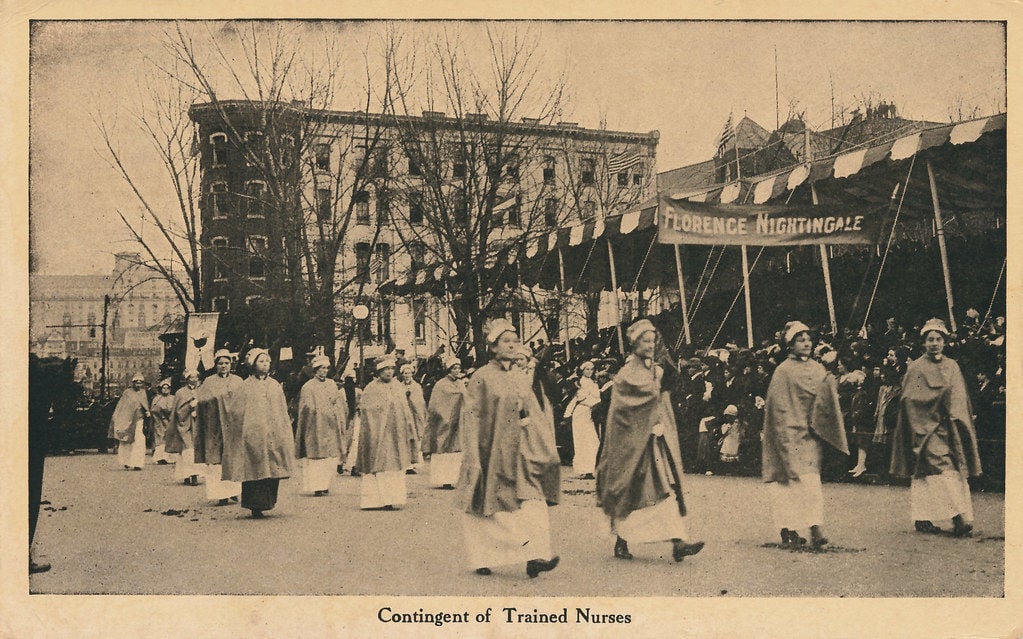 Nurses marched about midway through the procession at the Women's Suffrage March, March 3, 1913. They are seen here where the march veered off Pennsylvania Avenue at 15th Street in Washington, D.C. The Hotel Regent on the southeast corner of 15th and Pennsylvania Avenue appears in the background.