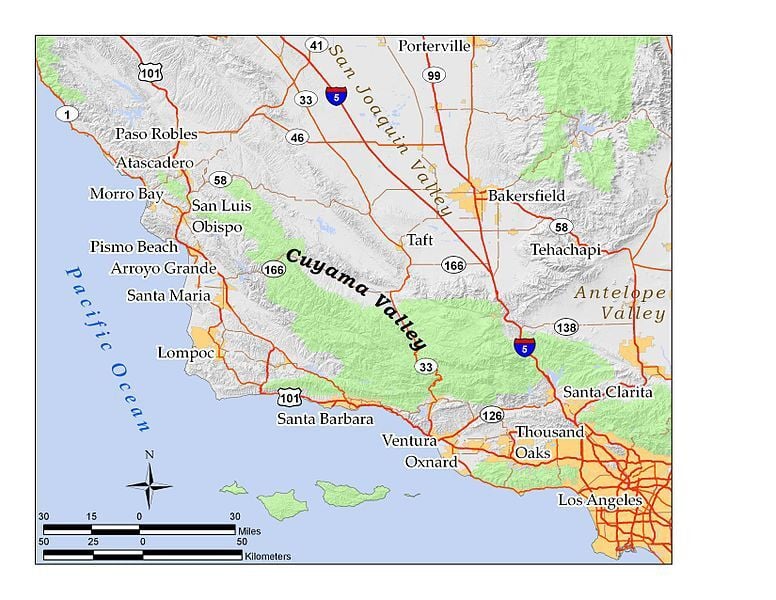 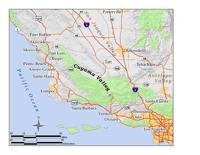 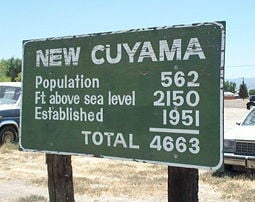 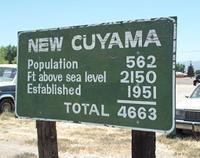 While talking with some friends about the importance of rural libraries to our nation's health, the towns of Cuyama and New Cuyama came up. My friends, who have lived in Santa Barbara County for decades, said they knew almost nothing about the Cuyama Valley and asked if I would write up an article on it.

As I started to research, I realized how little I knew about Cuyama but how fascinating the geology, history and economics of the area are.

The towns of Cuyama and New Cuyama are in Santa Barbara County, approximately 55 miles east of Santa Maria on Route 166. The Cuyama Valley is located in the corner of four counties: north-eastern Santa Barbara County, south-eastern San Luis Obispo County, north-western Ventura County, and south-western Kern County. The valley encompasses about 300 square miles and was formed by the Cuyama River, whose headwaters are just north of Pine Mountain. The Cuyama River joins the Sisquoc River and eventually becomes the Santa Maria River, whose mouth reaches the Pacific Ocean at Guadalupe.

New Cuyama has a population of 528 living in 181 households. The median household income is $59,779, with the average household income being $91,969. The Cuyama Elementary School is a kindergarten to eighth grade and has 153 students. The high school has 47 students. The community has a library primarily funded by Santa Barbara County and is administered by the Santa Maria library. The library’s service population is over 1,000 people, illustrating the importance of rural libraries to serve the needs of people living in remote areas outside cities and towns.

History of the Cuyama Valley

The Chumash were the earliest documented inhabitants of the valley, with over 1,000 people living in villages along the river over 10,000 years ago. The Cuyama Valley was the main trading route between the Native-American tribes in the central valley and those on the coast. The name Cuyama (pronounced "Kwee-ah-ma") comes from the Chumash word " kuyam," meaning clam. In fact, large deposits of fossilized marine sediment are found in the Cuyama Valley, including those of the Argo pecten (an early scallop) and Ostrea titan (a huge oyster). Astrodapis cuyamesis (an early sand dollar), after which Cuyama is named, is found only in Cuyama Valley.

Once the Spanish arrived in the Cuyama Valley in 1801, the Chumash were forced into the mission system. Their lands became cattle pastures, which made the previous life of hunter-gather impossible as the cattle trampled the native plants, ate the grass and nuts, and drove away the deer. Once Mexico gained its independence from Spain and secularized the missions, two large land grants were issued to the Cuyama Valley.

The first land grant was Rancho Cuyama de Rojo, 22,193 acres from Governor Manuel Micheltorena in 1843 to Jose Maria Rojo. Rojo died in 1846, and his wife sold the land to the second land grant recipient in 1847.

The second land grant was Rancho Cuyama de Lataillade in 1846. It consisted of 48,827 acres granted by Governor Pio Pico in 1846 to Cesario Lataillade, a French trader involved in the hide and tallow trade who came to Santa Barbara in 1841. Lataillade married Antonia Maria de la Guerra, the fourth and youngest daughter of Jose de la Guerra y Noriega of Santa Barbara. He also acquired Rancho La Zaca and Rancho Corral de Cuati. Lataillade was killed in an accident in 1849 and the properties were inherited by his widow and their two children, Maria Antonia Lataillade and Cesario Eugene Lataillade.

The Nojoqui area was originally a Chumash village named "Naxuwi," which means meadow. There are two legends concerning the falls...

Once California became a state, many smaller homesteads were granted in the area. Settlers established farms in the canyons where there was water and raised cattle and wheat. In 1939, pumping water wells were drilled. The availability of irrigation transformed the valley from cattle grazing into an agricultural area with successful farms and orchards.

Little further economic development took place in the Cuyama Valley until the discovery of oil in 1948 at the Russell Ranch Oil Field and 1949 at the much larger South Cuyama Oil Field. Richfield Oil Company built the town of New Cuyama to house and support the oil workers. Oil was pumped by pipeline to a refinery near Long Beach.

For a brief time in the early 1950s, the Cuyama Valley was the fourth-most productive oil region in California. As oil production declined — only about 2% of the oil remains today — the primary economic activity in the valley again became agriculture. Carrots are currently the most significant crop, but water shortages may soon cut production of all agricultural crops. As water becomes scarce, oil may again be part of Cuyama's future.

In July 2005, 52,000 acres in Los Padres National Forest, mainly in the area just south of Cuyama, was opened up to future oil development by the National Forest Service.

The Cuyama Valley is bounded on all sides by mountains: The Sierra Madre Mountains along the south and west, La Panza Range on the north, and Caliente Range along the northeast — all part of the California Southern Coast Ranges that basically run north and south along Central California. In addition, the San Emigdio Mountains on the east of the valley are part of the Transverse Range System that runs east and west. All of these mountain ranges make the Cuyama Valley a beautiful place. The Southern Coast Ranges have a Mediterranean climate and are mainly in the chaparral and woodlands ecoregion.

San Marcos Pass has been used to connect the coast and the Santa Ynez Valley for thousands of years. The Chumash used the Pass as the main trading route between the coastal and Valley Chumash villages. Later, the Spanish missionaries and soldiers used the Pass to travel between the missions.

Geologically, the valley is an alluvium-filled (loose clay, silt, sand, or gravel that has been deposited by running water in a stream bed) and synclinal (folded) basin formed millions of years ago by the rising and falling of the ocean levels and erosion from the surrounding mountain ranges. The dictionary states that "floodplain alluvium can be highly fertile and supported some of the earliest human civilizations.” This is what makes the Cuyama Valley such a productive agricultural area.

As stated above, the only problem is the lack of a plentiful source of water to support agriculture.

If you wish to see the varied geology of the Cuyama Valley, go to socalgeology.com/2016/04/21/blog-ca-166, a short publication by Art Sylvester and Libby O’Black Gans. Print it out, and you can follow Route 166 to see the various geological sites along the route. It is a short article, and I’ll guarantee you will not be disappointed by the geological sites along the way that you would ordinarily drive by and never notice their significance.

The Cuyama Valley is truly a historical, agricultural, and geological gem right in our own backyard. Don't miss it.