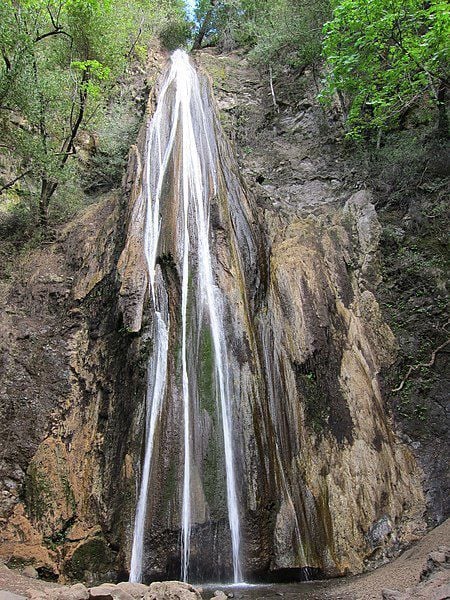 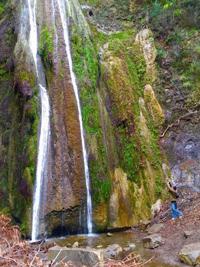 Once you reach the Nojoqui Falls, the view is fantastic, especially if the falls are running. 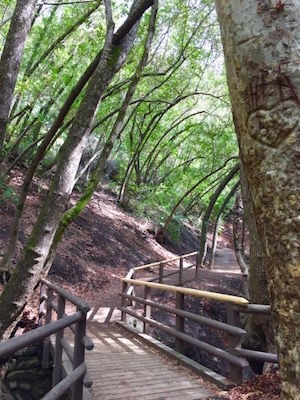 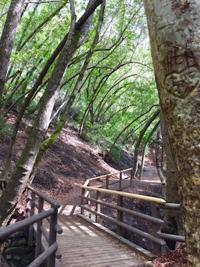 Nojoqui Falls trail is a scenic, easy 10-minute hike on a well-maintained dirt trail with wooden bridges over the creek crossings. 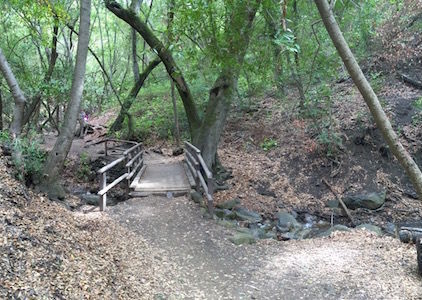 On the Nojoqui Falls trail.

Once you reach the Nojoqui Falls, the view is fantastic, especially if the falls are running.

Nojoqui Falls trail is a scenic, easy 10-minute hike on a well-maintained dirt trail with wooden bridges over the creek crossings.

On the Nojoqui Falls trail.

Suppose you are looking for a great place to have a family picnic, an easy, scenic hike, or simply to view a beautiful waterfall (even when there is no water flowing over it). In that case, Nojoqui Falls Park is for you — pronounced "na-hoo-ee," not “no-joke-ee."

It is a Santa Barbara County park and is located on Alisal Road, 2.6 miles southwest from Solvang and 1.5 miles northeast off Highway 101 at Old Coast Highway.

The park includes four oak tree-shaded picnic areas, barbecue grills, a playground, a large, open grass field and restrooms. The park is open daily from 8 a.m. to sunset and is free to visit. For a fee, you can reserve one or all of the picnic areas if you wish to have a large group gathering.

The trail up to the 80-foot-high falls starts at the southern end of the park. It is a scenic, easy 10-minute hike on a well-maintained dirt trail with wooden bridges over the creek crossings. The path is acceptable for young children and seniors, but it is not stroller, walker, or wheelchair friendly. Dogs on leashes are permitted in the park and on the trail. Do not get off the path as there is lots of poison oak along the way. Once you reach the falls, the view is fantastic, especially if the falls are running. If no water is running over the falls, the trip is still worth it for the views of the canyon and the fall's cliff itself.

When I was growing up, Nojoqui Falls Park was the only large public park in the Valley. The annual Farm Bureau barbecue, 4-H Exhibit Days, Elks Queen candidate fundraisers — any sizable outdoor gathering happened at Nojoqui Falls Park. I can remember attending many birthday parties there, too. Today, both Buellton and Solvang have built lovely parks, but back in the day, the action was at Nojoqui.

The Nojoqui area was originally a Chumash village named "Naxuwi," which means meadow. There are two legends concerning the falls. The first is during a prolonged drought when the Chumash chief held an all-night prayer vigil asking the gods to help bring water. In the early morning, a beautiful woman appeared and led the chief to a fern-covered glen. The woman arose into the air, and as she disappeared, her flowing white dress turned into a beautiful waterfall. Nojoqui Falls was born, and the drought was broken.

The 1969 Santa Barbara oil spill became a flashpoint for the founding of the environmental movement.

The second legend is during a furious wind and rainstorm, a group of Chumash took shelter in a cave. They heard cries for help coming from outside. Only a beautiful young maiden dared to go out to see if someone needed help. She rescued a warrior from another tribe who had been injured by a fallen tree. The warrior was taken back to the village, and while he was healing from his injuries, he and the maiden fell in love. The other members of the tribe did not permit this, and there were plots to kill the warrior. Hearing this, the young lovers ran away together. They were pursued and eventually trapped at the top of Nojoqui Falls. Rather than be captured and torn apart, they chose to die together and leaped over the falls to their death — a romantic legend indeed.

No matter which legend you choose to believe, the falls are a beautiful sight.

Once the Spanish arrived in Alta California, the Naxuwi Village came under the rule of Mission La Purisima in Lompoc. (This was before Mission Santa Inés was built.)

In 1843, Gov. Manuel Micheltorena gave a 13,284-acre land grant to Raimundo Carrillo, grandson of Jose Raimundo Carrillo. The latter was a member of Gaspar Portola’s original Spanish expedition of Alta California and the founder of the famed Carrillo family in California. The young Raimundo Carrillo served as a clerk at Mission Santa Barbara. He also was the mayor of Santa Barbara one year before California became a U.S. territory. The grandson made Rancho Nojoqui into a large successful cattle ranch.

In 1854, Ulpiano Yndart, a Basque immigrant from Switzerland, bought Rancho Nojoqui from Carrillo and continued the cattle business. During the 1860s, a stagecoach stop was established at Rancho Nojoqui. That was the stagecoach route to Solvang and the Santa Ynez Valley from the Gaviota Pass route. (NOTE: The road to Buellton, which is now Highway 101, did not go through until 1917, so the only way to the Santa Ynez Valley from Gaviota Pass was through Rancho Nojoqui.)

Over a million people a year visit Catalina Island and spend $166.7 million to do everything from enjoying the beautiful scenery to playing golf, hiking, biking, fishing scuba diving, kayaking, shopping and visiting the many museums. Learn more about Catalina right here.

Yndart operated a successful cattle ranch until the mid-1860s when floods, then drought killed off the cattle herds statewide. He lost over 1,000 head of cattle.

In 1868, H.W. Pierce bought the ranch from Yndart, who went on to be Santa Barbara city treasurer and as a commissioner overseeing the creation of Ventura County in the early 1870s. (NOTE: Pierce also owned Rancho Tequepis and Rancho San Marcos.) Pierce called his new property Alisal Ranch, part of which is currently owned by the Jackson family.

In 1896, Natale Giorgi, an immigrant from Switzerland who came to the U.S. in 1879 at the tender age of 22, bought 1,743 acres from Pierce and established Nojoqui Ranch. This was the start of the four generations of Giorgis that still own Nojoqui Ranch today.

In 1944, the initial 58 acres of Nojoqui Falls Park were donated by the Petan Co. that ran a dairy to the south of Nojoqui Ranch. (NOTE: The falls were not a part of the original Mexican land grant as the area was deemed worthless.) In 1968, Santa Barbara County purchased an additional 27 acres to the west of the original 58 acres donated by the Petan Co. to complete the park.

If you have not visited Nojoqui Falls Park, pack a lunch, put on your walking shoes and enjoy this hidden treasure.