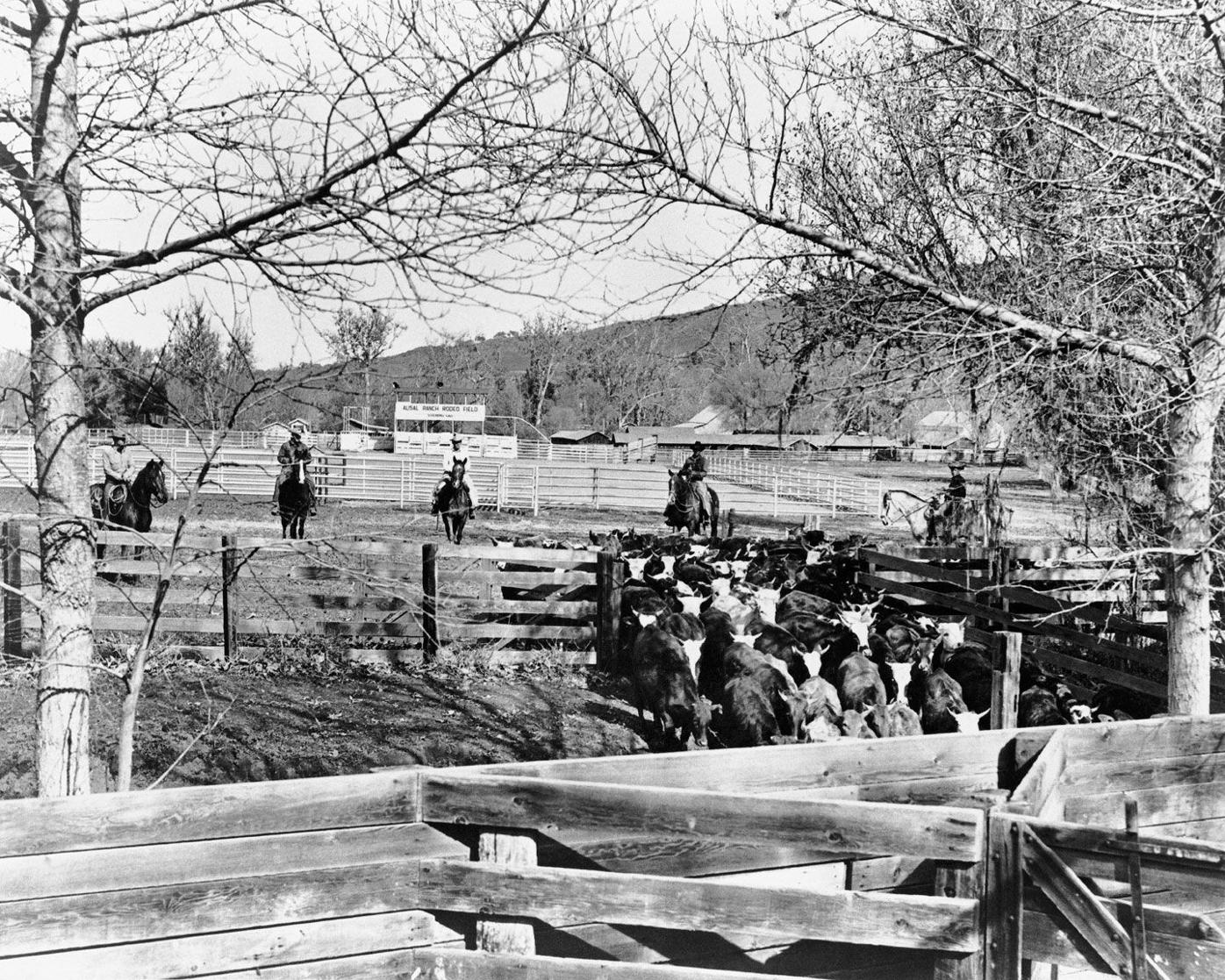 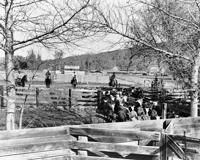 Horses were essential to the cattle economy of the Alisal Ranch for decades during the early part of the 20th century. 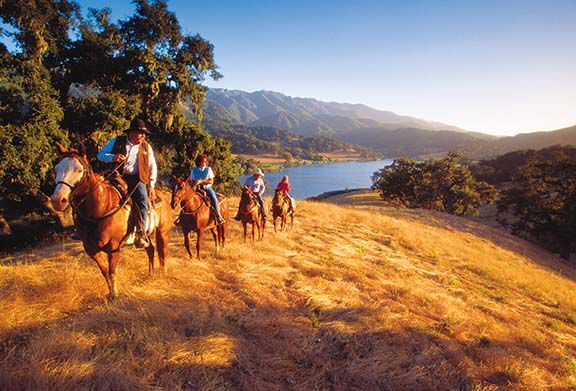 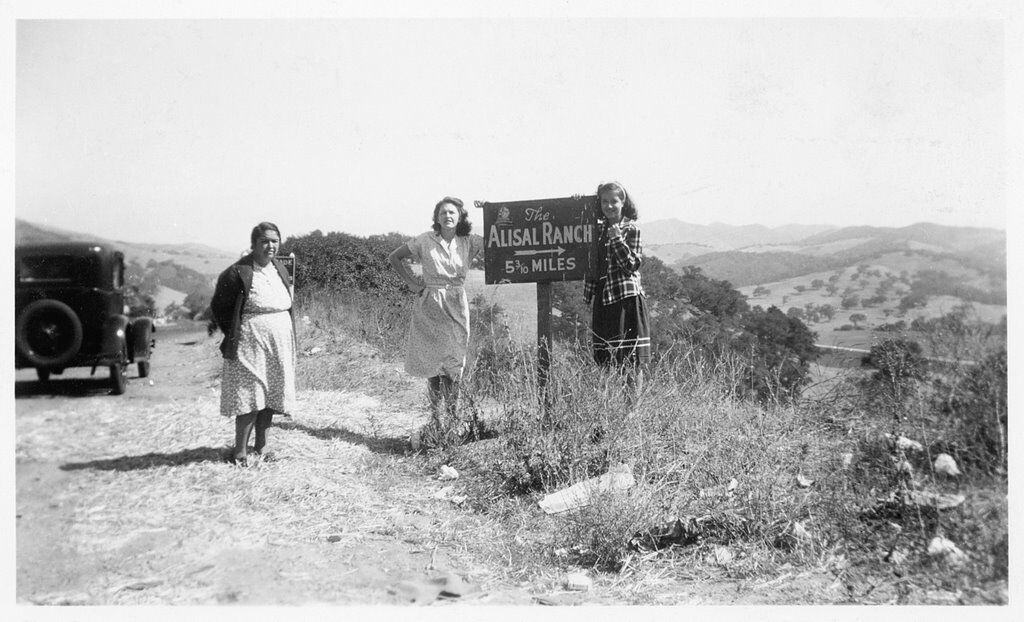 Passersby stop to grab a photo beside a Alisal Guest Ranch mile marker in Solvang, circa 1930.

Horses were essential to the cattle economy of the Alisal Ranch for decades during the early part of the 20th century.

The Santa Ynez Valley has had many honors in its long history: the old Spanish mission, Solvang's first college in California, a 5,000-tree olive grove, a stagecoach stop, a narrow-gauge railroad, a unique Danish village and world-famous split pea soup. The list goes on. Adding to that list, our Valley received two new honors that both go to the Alisal Guest Ranch.

In May, the Alisal Guest Ranch celebrated its 75th anniversary and was inducted into the Historic Hotels of America directory.

To be selected, a hotel must be at least 50 years old; have been designated by the secretary of the Interior as a National Historic Landmark or listed in the National Register of Historic Places; and be recognized as having historic significance. In addition, the Alisal had to show that it had preserved and maintained its historic integrity, architecture and ambiance to receive the honor.

The Alisal Guest Ranch was also designated by USA Today as the best destination resort in the United States, nominated by its readers.

Most of us in the Valley already know the Alisal to be an important part of the community, but receiving these two national honors confirms its excellence and historical significance.

Before the Spanish arrived in the 1700s, this whole area had a large Chumash population. Once Mexico received its independence from Spain, the missions were secularized. The vast mission lands were given to prominent citizens who had helped the Mexican government. In 1843, the Alisal Guest Ranch was part of a 13,284-acre Nojoqui land grant given to Raimundo Carrillo by Mexican Gov. Manuel Micheltorena. (NOTE: At the time, this land grant also included the Nojoqui Falls area. The name Alisal was a Chumash term meaning "a grove of sycamores." The name of the original Nojoqui land grant remains today.)

The land changed hands three times until, in 1854, Ulpiano Yndart bought the Alisal portion of the land grant. Yndart’s journey to the Americas began at age 16 when he was offered a business job in a Mexican company. The news of the discovery of gold in California reached Mexico in 1848, and he soon prepared to travel to the promised land. A Basque immigrant trained in business, Yndart eventually purchased the ranch with the hopes of making the cattle operations even more profitable.

However, in the winter of 1861-62, epic proportions of rainfall hit California. Storms stayed for weeks, with one storm lasting 70 days, while one downpour in 1861 lasted 20 consecutive hours. The narrow coast plains throughout Santa Barbara were entirely flooded by actual rivers of waters racing out of the mountains. The ranch, along with all the surrounding acreage, was inundated by raging waters, uprooting trees and washing away homes and buildings. Much of the rich pastureland was washed away by the destructive deluge. Hundreds and hundreds of cattle drowned; one-quarter of the livestock was lost.

The water-weary population looked forward to more sun by summer, which unfortunately was all they would get for the next two years. Due to the devastating drought of the mid-1860s, only 5% of the cattle in Santa Barbara County survived. From the late fall of 1862 into 1864, all of California experienced a drought. Less than 4 inches of rain fell in 1863, and 1864 had even less. There was no grass for miles around, and cattle died of starvation. Even the Santa Ynez River dried up. The area was strewn with cattle carcasses, attracting turkey vultures, bears and wolves out to scavenge. While 200,000 head of cattle had survived the floods, only 5,000 cattle remained in the entire Santa Barbara County by February of 1864.

"Many of the rancheros heretofore accounted rich are reduced to poverty," one newspaper reported.

Yndart was ruined financially. In 1868, he sold Rancho Nojoqui for pennies on the dollar to an enterprising American family, the Pierces. The Pierce family engineered a novel irrigation system, allowing them to use water from the Santa Ynez River to farm a portion of Rancho Alisal.

By 1907, a new owner, William T. Mead, had established the Alisal Ranch Co. The ranch and its neighbors' ranches soon experienced an extended period of prosperity. Horses had been essential to the cattle economy of the Alisal for decades. However, such care had never been given to these animals until Charles E. Perkins purchased the Alisal in 1927. He devoted his attention to raising thoroughbred horses, as well as fine cattle. Perkins even oversaw the rearing of Kentucky Derby-winner Flying Ebony, the trotting horse Lou Dillon and other well-known horses. This was a forerunner of the excellent horse ranches we have in the Valley today.

A century after Carrillo received the grant for Rancho Nojoqui, in 1943, the Alisal was purchased by Charles "Pete" Jackson Jr., who expanded the reputation of the Alisal in an entirely new direction — hospitality. Originally designed solely as a working cattle ranch, manager Lynn Gilliam advised the family to convert the cattlemen's quarters to guest rooms for dude ranch visitors. On July 16, 1946, The Alisal Guest Ranch was opened for the summer seasons with a maximum capacity of 30 guests.

Since then, The Alisal has consistently ranked at the top of the country's resorts and has been a playground for notable guests that include Clark Gable, who married Lady Silvia in the Alisal's historical library, as well as Doris Day, who was featured on the front page of a prominent Hollywood magazine while on one of her regular visits to the Alisal.

The Jackson family continues to carry on the historic tradition, as the Alisal's two honors this year confirm.

The property spans 10,500 acres of rolling hills and has been considered the premier full-service guest ranch for couples, families and conferences since it opened in 1946.

Guests head to the Alisal annually for family reunions, and in a surviving tradition, many families who initially met at the Alisal continue to schedule their vacations on the same dates to reconnect each year. There is no better testimonial than that.

Congratulations to the Alisal staff and the Jackson family.

A number of pink-colored nibbles, specialty desserts and drinks will be for purchase at eateries located throughout the resort property to help raise funds for the Mission Hope Cancer Center.