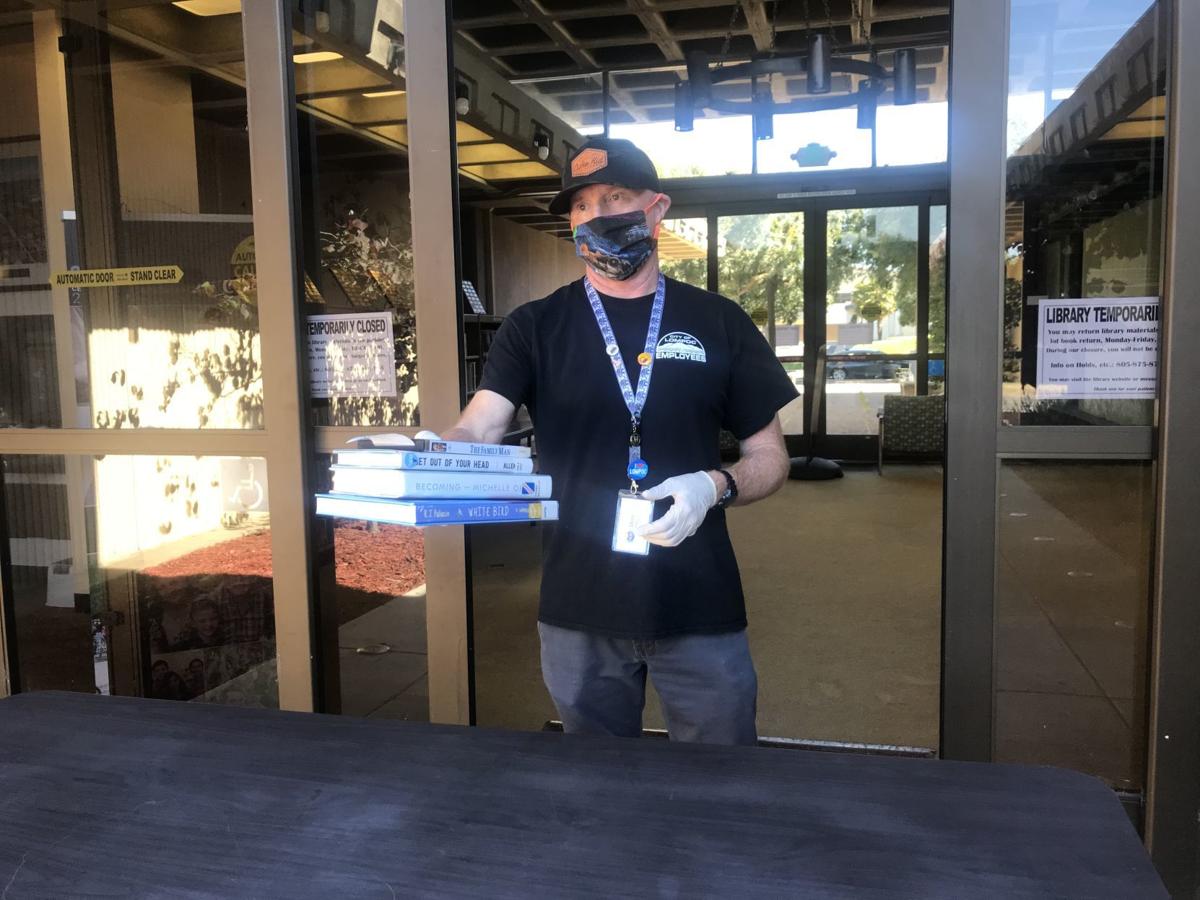 Lompoc Public Library technician Dominic Keen holds out a stack of books that are ready for pickup by a library patron who called ahead to hold the materials. 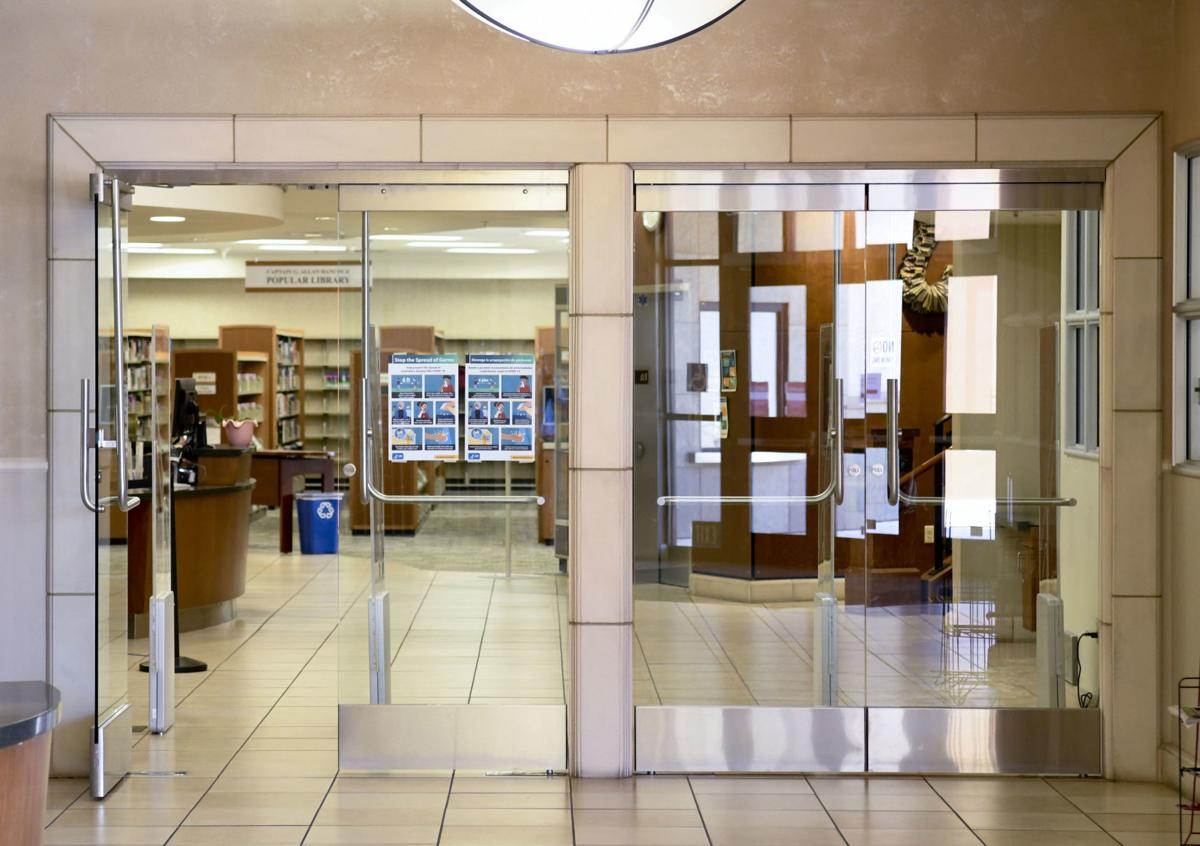 The Santa Maria Public Library, shown Tuesday, may be closed through September, with furloughs for many employees, because of funding problems. 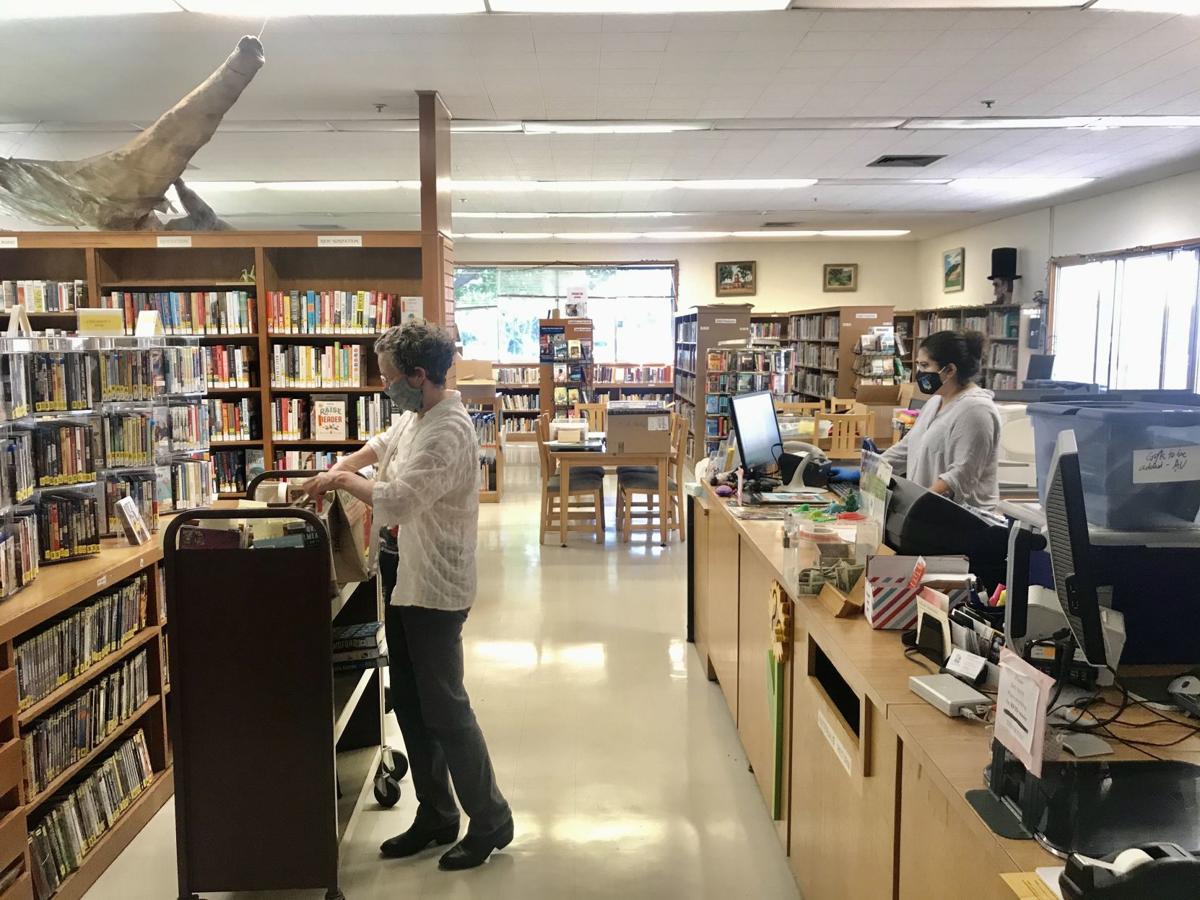 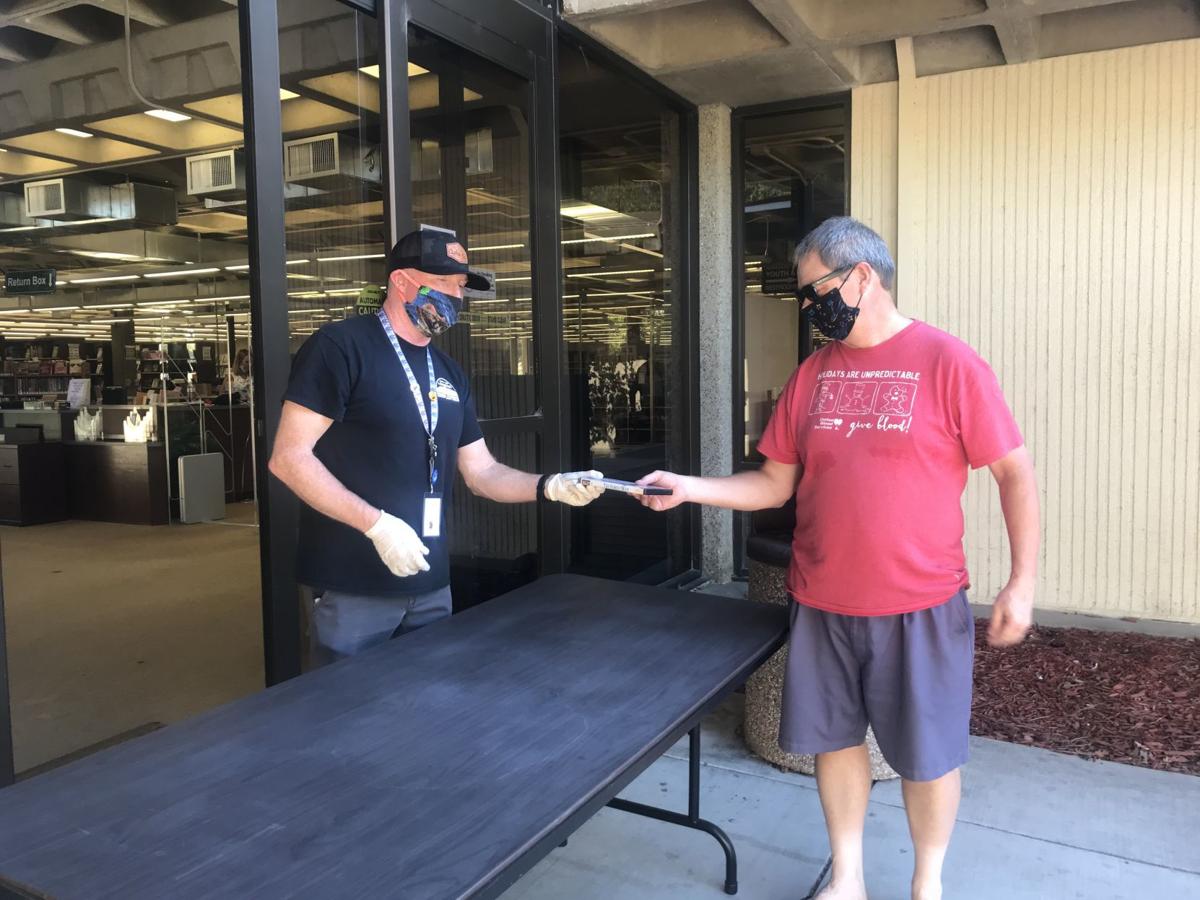 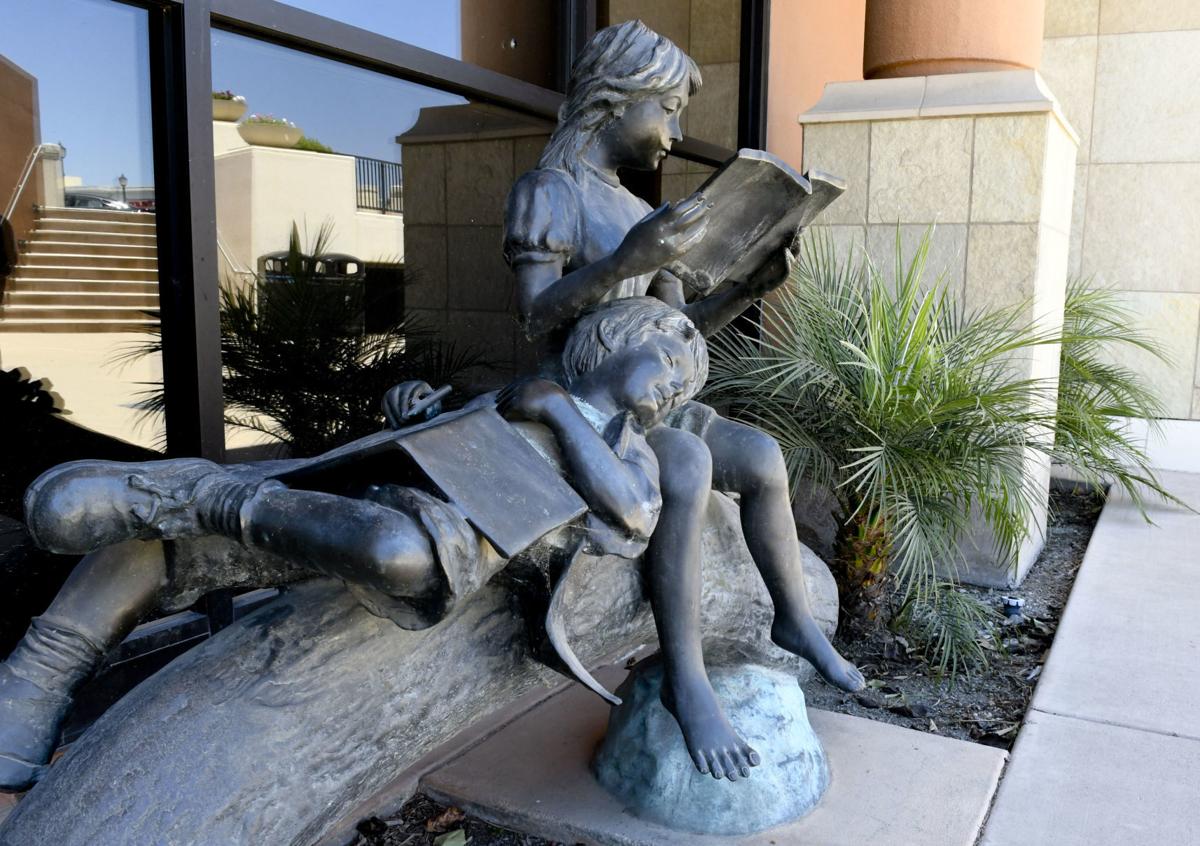 A statue of children reading is shown outside the Santa Maria Public Library on Tuesday. The facility may be closed through September, with furloughs for many employees, because of funding problems. 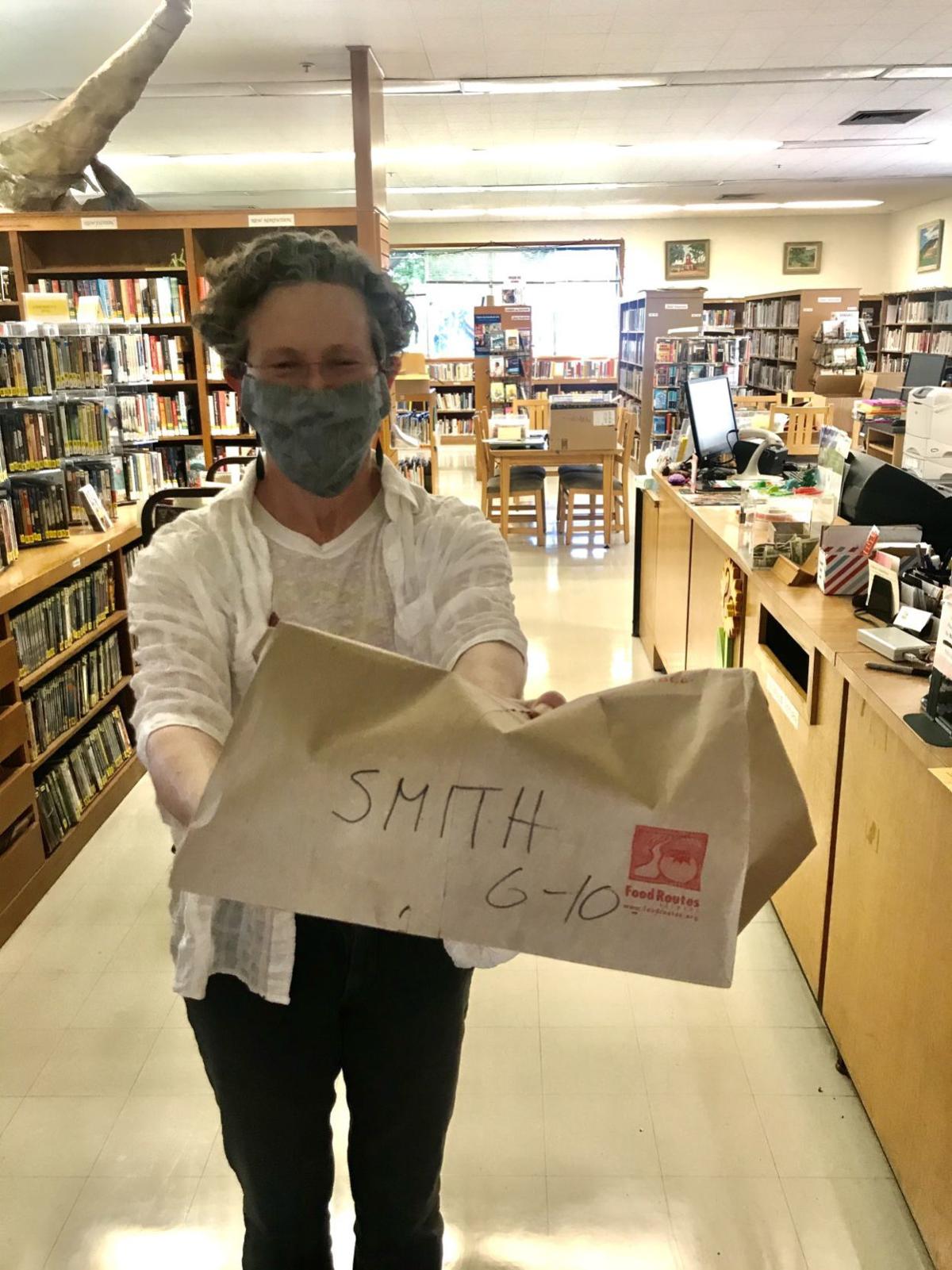 Solvang Library Supervisor Carey McKinnon holds out a brown bag filled with books and labeled for pickup as part of their curbside pickup program which begins on Tuesday, June 16. 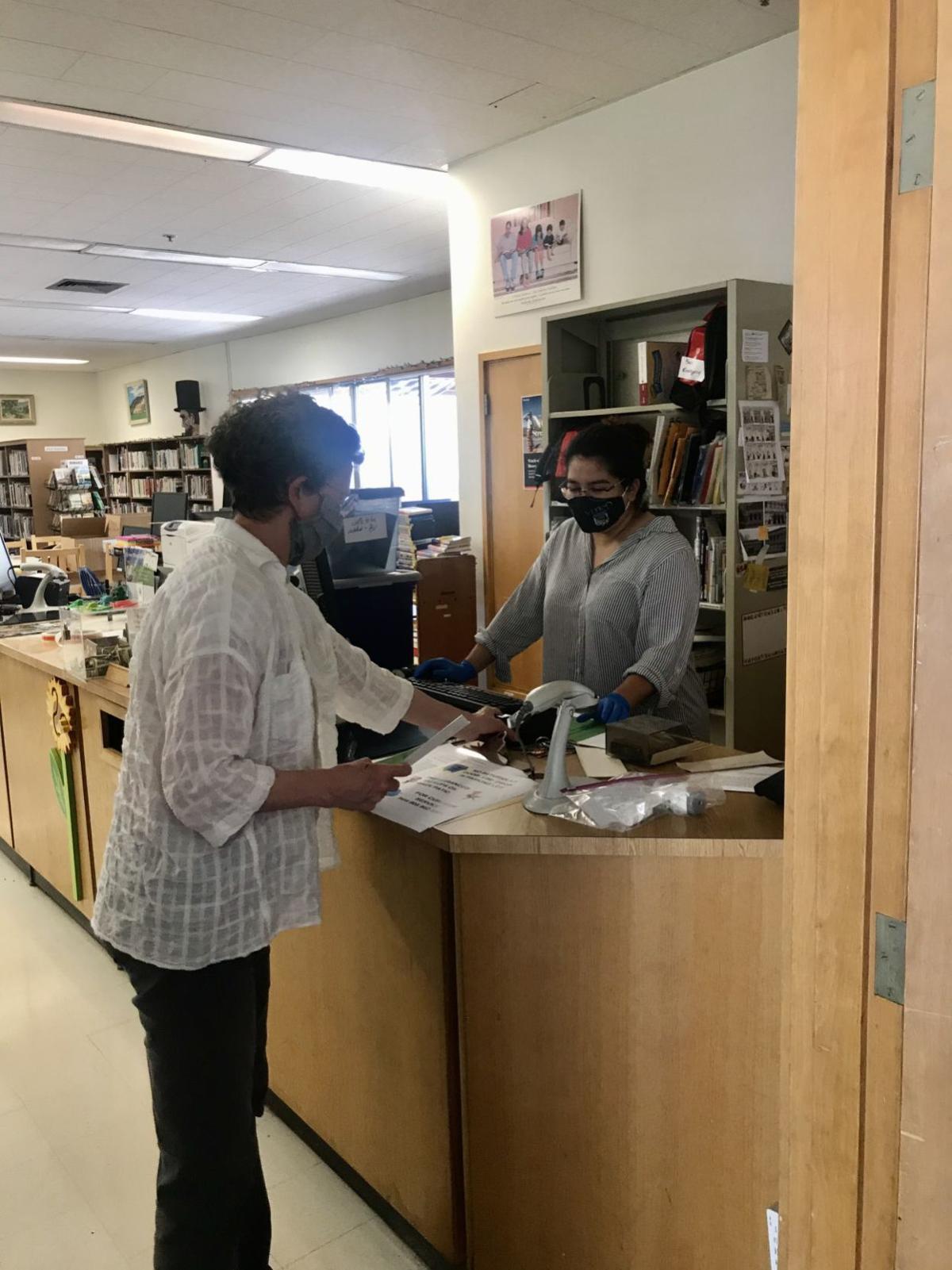 Solvang Library Supervisor Carey McKinnon, left, and library technician Mirzam Campoy work together to get informational signs about the library programs being offered printed and hung. 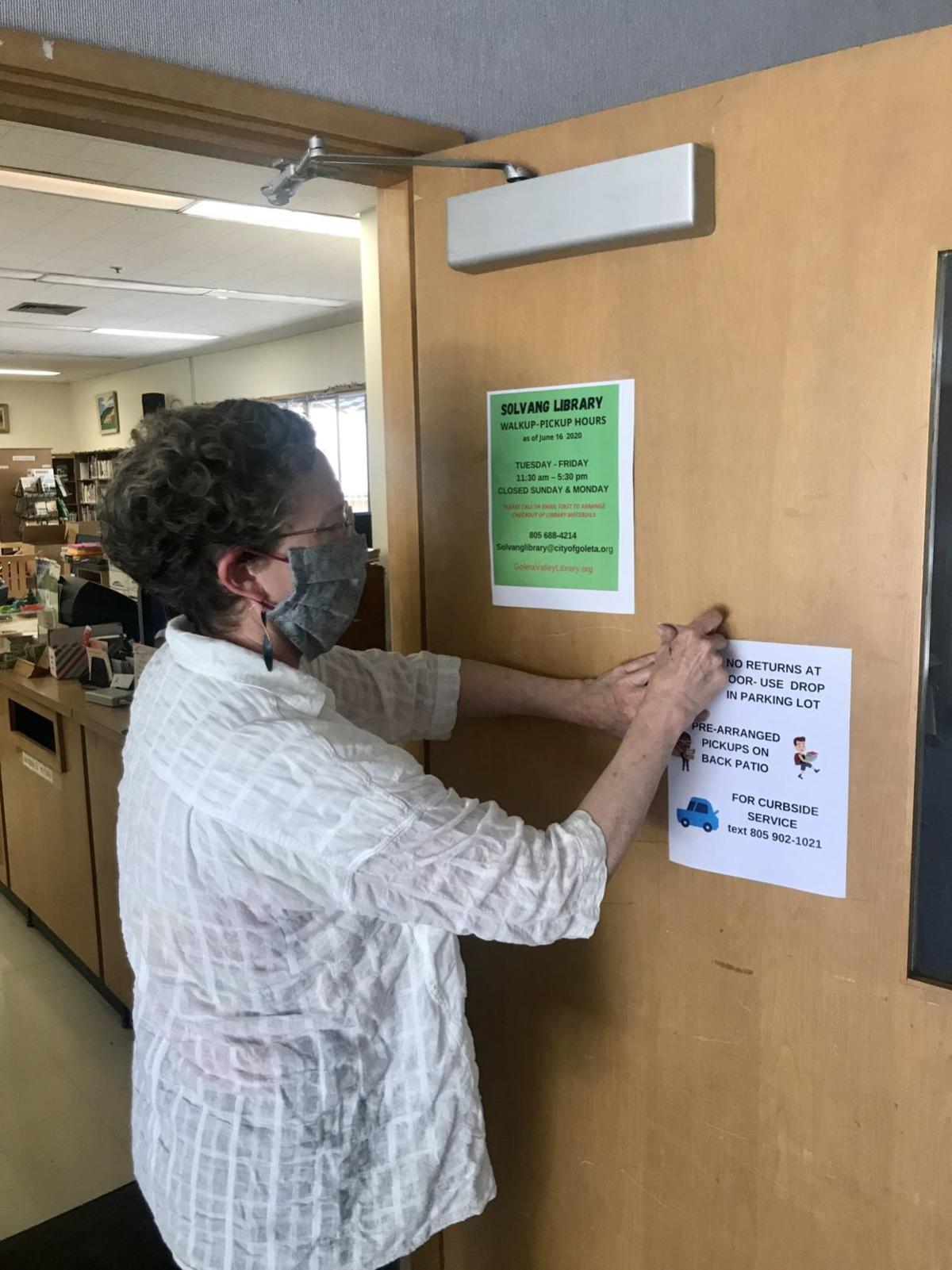 The libraries are beginning the process of extending curbside pickup services to their respective communities, signaling a reopening nearly three months after the COVID-19 pandemic forced closures and halted all in-person business.

"We've been members for a really long time," said Lompoc Library patron Brad Wilke, who stopped by to pick up the material he checked out via his Black Gold Cooperative Library System account. "We're usually always here."

Standing in front of the Lompoc library's two rear sliding glass doors and behind a six-foot table, library technician Dominic Keen greeted Wilke wearing a face mask and gloves before disappearing into the library to retrieve the materials that had been set aside.

Keen said that without having to enter the property, patrons can now check out their favorite books by placing a hold online like Wilke did, or by calling the Lompoc library's designated phone line.

"That's how people are getting items right now – by putting items on hold. And when they're notified that it's here, they're setting up appointments either by texting or calling," Keen said. "It's been working really well."

The borrowing of books and other materials across the Black Gold network, which includes Santa Barbara County libraries and a swath of Ventura and San Luis Obispo County libraries, has temporarily stopped, however, according to Keen. Patrons can only borrow from within their own city limits due to concerns about cross-contaminating materials.

For Lompoc library members, that means their book needs must be temporarily met through the main library's collection or that of the Vandenberg Village branch. But Keen said it's a move in the right direction.

"Not having people here is disappointing but we're doing the best that we can," he said. "And it's nice that we're actually able to get items back out to patrons again."

The Solvang Public Library, though illuminated, is quiet. But starting Tuesday, June 16, life will slowly return to the Buellton and Solvang library branches as curbside pickup service is rolled out.

Solvang Library Supervisor Carey McKinnon described the program as more of a walk-up window or sidewalk program, whereby patrons ahead of time can place holds on any items stocked at the Goleta, Buellton and Solvang libraries, and pick them up by appointment once contacted by staff.

"The staff in all three libraries have been communicating online and coming up with ideas," McKinnon said, referring to the creative pivot the library system has undergone. "It's actually been really fun because when we had our normal service here at the branch we did not interact with staff in other branches very much. That's been a really great benefit– if you can say there is a benefit."

Patrons can gather their pre-ordered materials from Solvang library's back patio. Last minute pickup requests, which may or may not be filled same day, can be retrieved at the front entrance where administrative queries will also be addressed.

"We're so thrilled," McKinnon said, noting that in order to receive service, patrons must wear a face covering and keep their social distance on the sidewalk leading up to the library’s front walkway. "We've been chomping at the bit to be able to get books into patrons' hands – especially kids. I've had so many calls from parents with small kids at home ... Parents really want to limit screen time for their kids."

As part of the overarching Goleta Valley Library system, McKinnon said both Buellton, Solvang and Goleta sites will continue virtual programming like story time, tech-tutoring via Go-To Meetings and "Check-in with a Librarian" phone services, in addition to pickup services.

"And if you need book recommendations, just call us and we'll put something together for you," said McKinnon.

The Santa Maria Public Library, however, is only offering its patrons online offerings for the time being.

City Librarian Mary Housel explained that the library – which includes Cuyama, Guadalupe, Orcutt and Los Alamos – continues to work closely with the City of Santa Maria to move into Stage 3 allowances like curbside pickup services.

"We have submitted our reopening plan to the City and they are submitting our plan as a whole," she said, adding that a comprehensive approach to meeting California Department of Public Health criteria during this next phase, has proven to be a more tedious process. "I'm hopeful we will be able to extend those services in the next week or two."

Due to the COVID-19 pandemic, the California State Library has been dealt a major financial blow, leaving the Santa Maria library system and other nonprofits who depend on the governmental agency for sizable grants each year, concerned.

Approximately 23 employees have been furloughed since March 18, according to Housel. The furloughs – and keeping Santa Maria library closed through Oct. 1 to address a projected $516K loss — will be discussed at the City Council meeting on Tuesday, June 16.

In the meantime, two part-time and five full-time employees between Santa Maria and Cuyama are left to shoulder the load, and should the library open any sooner, Housel says that is not enough.

"I wish we could go back to how we used to do things," she said. "I know eventually we will."

A total of $500,000 in unallocated funds was set aside to address public demands for reform of the criminal justice system by the Santa Barbara County Board of Supervisors as they approved a $1.19 billion budget Tuesday.

The weekly virtual schedule is available through May.

June 12 recap: Lompoc news you may have missed this week

Permits in the works for Solvang's 2020 4th of July parade

While this year's Fourth of July Fireworks Show and Festival has been cancelled due to pandemic concerns, approval for Solvang's Independence Day parade is moving forward, according to Solvang Rotary Club member and longtime Fourth of July parade announcer Allan Jones.

Beas will be guiding a cohort of six young women who will all begin their studies at Hancock College this summer.

Beginning today, Wednesday, June 17 and through at least July 4, the outdoor market will be located on the temporarily-closed-to-traffic sections of Solvang's Copenhagen Drive, between Alisal Road and Second Street.

It's out in the open – it's fresh air. Everybody's been indoors the last three of four months. I like this better than how it used to be. It reminds me of a Hallmark movie.

Most of California history, including Santa Barbara County and more specifically, Santa Ynez Valley, can be traced back to land grants from controlled by Spanish and Mexican governments.

Lompoc Public Library technician Dominic Keen holds out a stack of books that are ready for pickup by a library patron who called ahead to hold the materials.

The Santa Maria Public Library, shown Tuesday, may be closed through September, with furloughs for many employees, because of funding problems.

A statue of children reading is shown outside the Santa Maria Public Library on Tuesday. The facility may be closed through September, with furloughs for many employees, because of funding problems.

Solvang Library Supervisor Carey McKinnon holds out a brown bag filled with books and labeled for pickup as part of their curbside pickup program which begins on Tuesday, June 16.

Solvang Library Supervisor Carey McKinnon, left, and library technician Mirzam Campoy work together to get informational signs about the library programs being offered printed and hung.