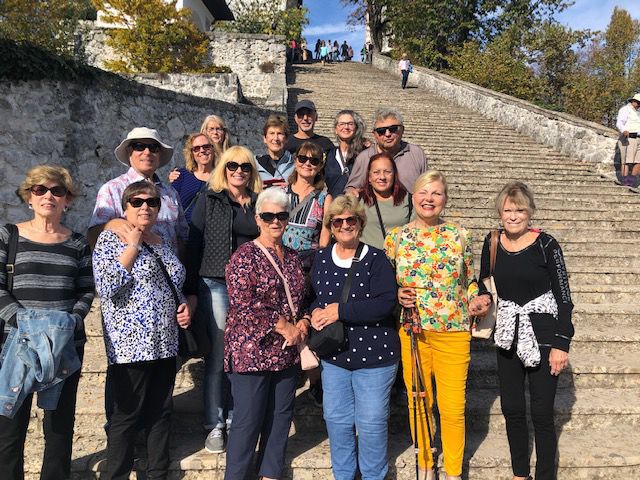 Linda Johansen, in yellow, gathers with her group for a picture while traveling through Croatia, Slovenia and the Adriatic Coast in October. 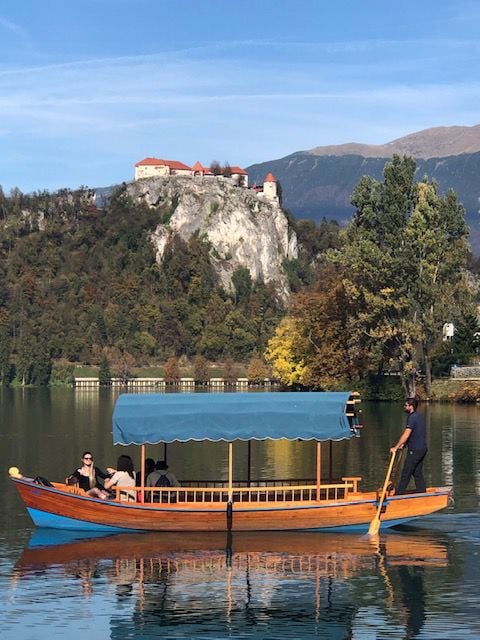 A pletna boat carries tourists and locals across the waters. 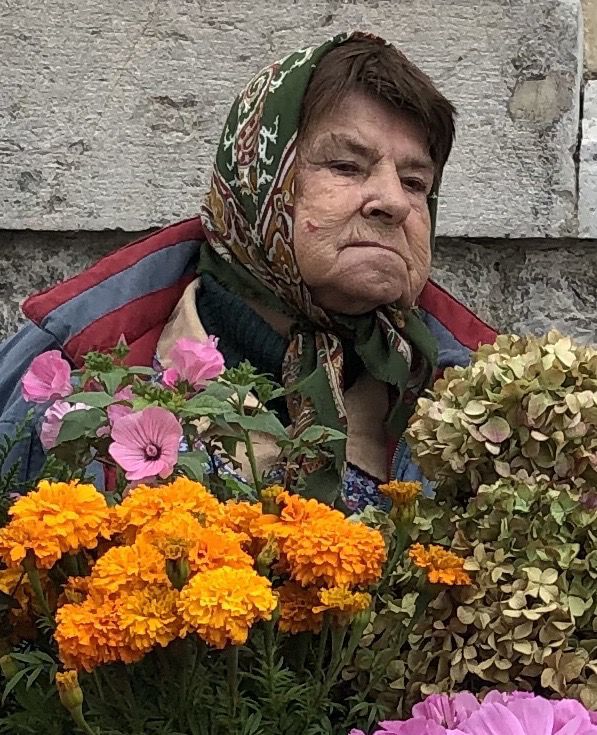 Johansen captures an image of a local from Opatija, Croatia. 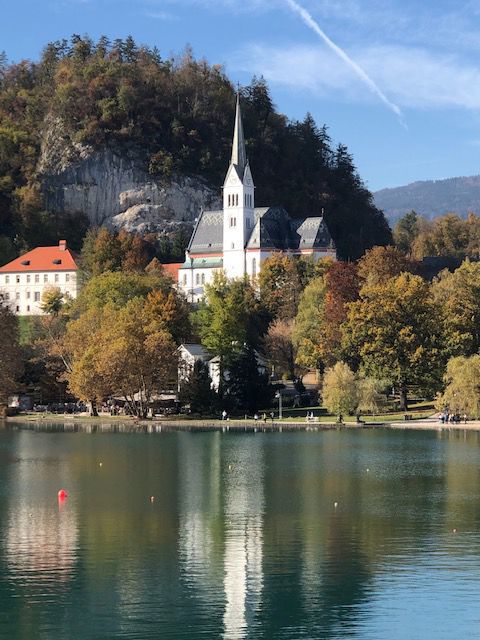 The serene, glass-like waters reflect the ancient architecture of the Adriatic Coast. 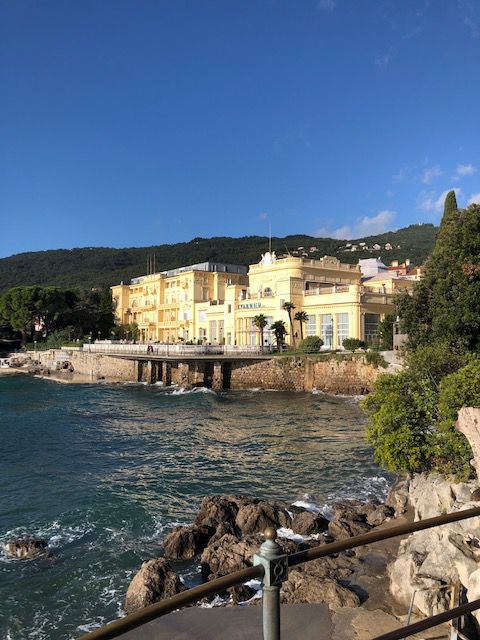 A photo taken in Opatija, Croatia. 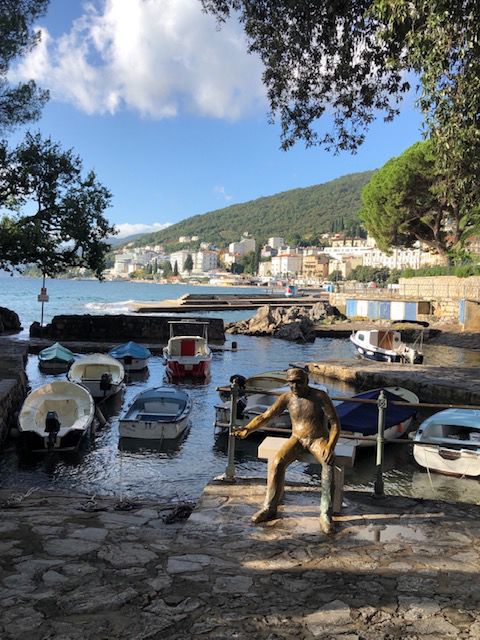 A seaside image taken by Johansen in Opatija, Croatia.

A group of adventurous travelers and I recently returned from a trip to the Adriatic Coast, visiting Croatia, Bosnia, Montenegro and Slovenia.

This beautiful region is filled with ancient cities, medieval architecture, intriguing cultures, rolling hills and stunning coastal scenery. The trip was rich in history and jammed-packed with cultural experiences.

Our tour began in the seaside resort of Opatija, Croatia, which is know as the Istrian Peninsula and Croatia’s Riviera. Opatija was once the summer retreat for the Roman Caesars and Habsburg Monarchs.

We enjoyed two nights in this fabulous area with Italian and Croatian influence as well as visited a local distillery producing brandies and other products from the use of local plants, fruits and herbs. The brandy tasting was a bit early in the day but we all bellied up to the bar anyway to enjoy that experience which was then followed by a delicious dinner with regional wines and culinary delicacies from the Istrian Peninsula.

We next enjoyed Plitvice Lakes which is a designated UNESCO World Heritage site. This is one of the oldest, largest and most beautiful national parks in Croatia. It is incredibly beautiful with 16 terraced turquoise-colored lakes where waterfalls and free-flowing water cascades connect one lake to the other and extends more than 73,000 acres. It was a 4 hour walk around the lower lakes on uneven narrow wooden bridges and hiking trails that are rich in forest and grassland habitats with an abundance of flora and fauna.

Even though we were exhausted after the trek, we were all sorry to leave this magical place. We all took multitudes of beautiful photos and everyone made the trek without falling in the water or on the trails, so it was a great experience of nature at its best.

Our bus then followed the exquisite Adriatic sparkling blue water coastline towards the medieval city of Dubrovnik.

We explored “Old Dubrovnik” a UNESO World Heritage site, and much of the group climbed the City Walls after seeing the Franciscan Monastery where Europe’s oldest pharmacy and Rector’s Palace resides. The marble streets and beautiful baroque buildings of Dubrovnik were breathtaking.

We were lucky with the timing of our visit to Croatia in late October as it was after their peak season. During the peak season, there can be ten or more ships docked in Dubrovnik at the same time with all of their passengers exploring the “Old City.” We were lucky that only three ships were docked as we explored and climbed the fort walls.

Dubrovnik was founded in the first half of the 7th Century falling under the protection of the Byzantine Empire and under the sovereignty of Venice, which in the 15th and 16th Century was the shipping rival. Dubrovnik ruled itself as a free state and republic until an earthquake in 1667 devastated the area and claimed more than 5,000 citizens.

Since then, Dubrovnik has been occupied and annexed several times.

We took a short ferry ride from Dubrovnik to nearby Lokrum Island for lunch and explored the ruins and all sat in the Throne used in the TV series Game of Thrones.

Dinner that evening was in Cilipi, the culturally rich region of Konavle, where we ate at a family-owned restaurant. Their ethnic food were prepared in the way of their ancestors and served with their regional wines. Slow-cooked veal is a country specialty and is most delicious.

We had two very slow border crossings into Bosnia and Montenegro, both were very time consuming due to the security and passport authorization, but worth the time and effort to get there.

From Dubrovnik, we had an optional excursion to Montenegro’s Bay of Kotor or the “Boka” which was once know as Europe’s southernmost fjord. But it is actually just a long, narrow inlet.

Beautiful buildings and cathedrals showcase the many cultures and empires that have left their mark on Montenegro. The history is very complicated and our guide did her best in explaining all of that to us.

Passing through Bosnia was a bit daunting as many homes sit empty as their owners have left, and many are bombed out and covered in bullet casings so it is safe to assume there was loss of life.

It was very sad to see the suffering that had taken place in this beautiful area.

From Dubrovnik the following day, we traveled up the winding coastal cliff roads that drop dramatically into the aquamarine of the Adriatic Sea to Split.

We enjoyed a walking tour featuring the impressive Diocletian’s Palace, one of the most significant late Roman historical monuments and a UNESCO World Heritage site. We also visited the Temple of Jupiter.

We continued our travel up the beautiful coast into picturesque Slovenia and stayed the next two nights in Ljubljana, a capital city that for over 1,000 years has marked the intersections of Eastern and Central Europe.

We toured City Hall and visited the magnificent Cathedral of St.Nicholas.

After a delicious lunch, we drove a short distance to Lake Bled which is absolutely stunning. We rode in a Pletna boat oared by young, local men to the picturesque island in the center of Lake Bled.

All of us climbed the very difficult 99 uneven cobblestone stairs to explore the 17th century cathedral, St. Mary’s Church, which sits on the top of the island so proudly.

The inside of St. Mary’s Church was breathtaking and many of us rang the wishing bell, hoping our wish would come true. (I wished that everyone would make it back down the 99 steep and uneven cobblestone stairs safely – myself included!)

The local tradition is for the groom to carry their intended brides up these horrific stairs.

There were three couples in the process of exercising that tradition while we were there: two couples looked promising but the third couple I’m sure didn’t make it to the top in one piece. He was already in trouble not even half way up the stairs when we lost sight of him oaring back to shore in our Pletna boat.

Linda Johansen: A colorful tour of Santa Fe, 'The Land of Enchantment'

Linda Johansen, in yellow, gathers with her group for a picture while traveling through Croatia, Slovenia and the Adriatic Coast in October.

A pletna boat carries tourists and locals across the waters.

Johansen captures an image of a local from Opatija, Croatia.

The serene, glass-like waters reflect the ancient architecture of the Adriatic Coast.

A photo taken in Opatija, Croatia.

A seaside image taken by Johansen in Opatija, Croatia.