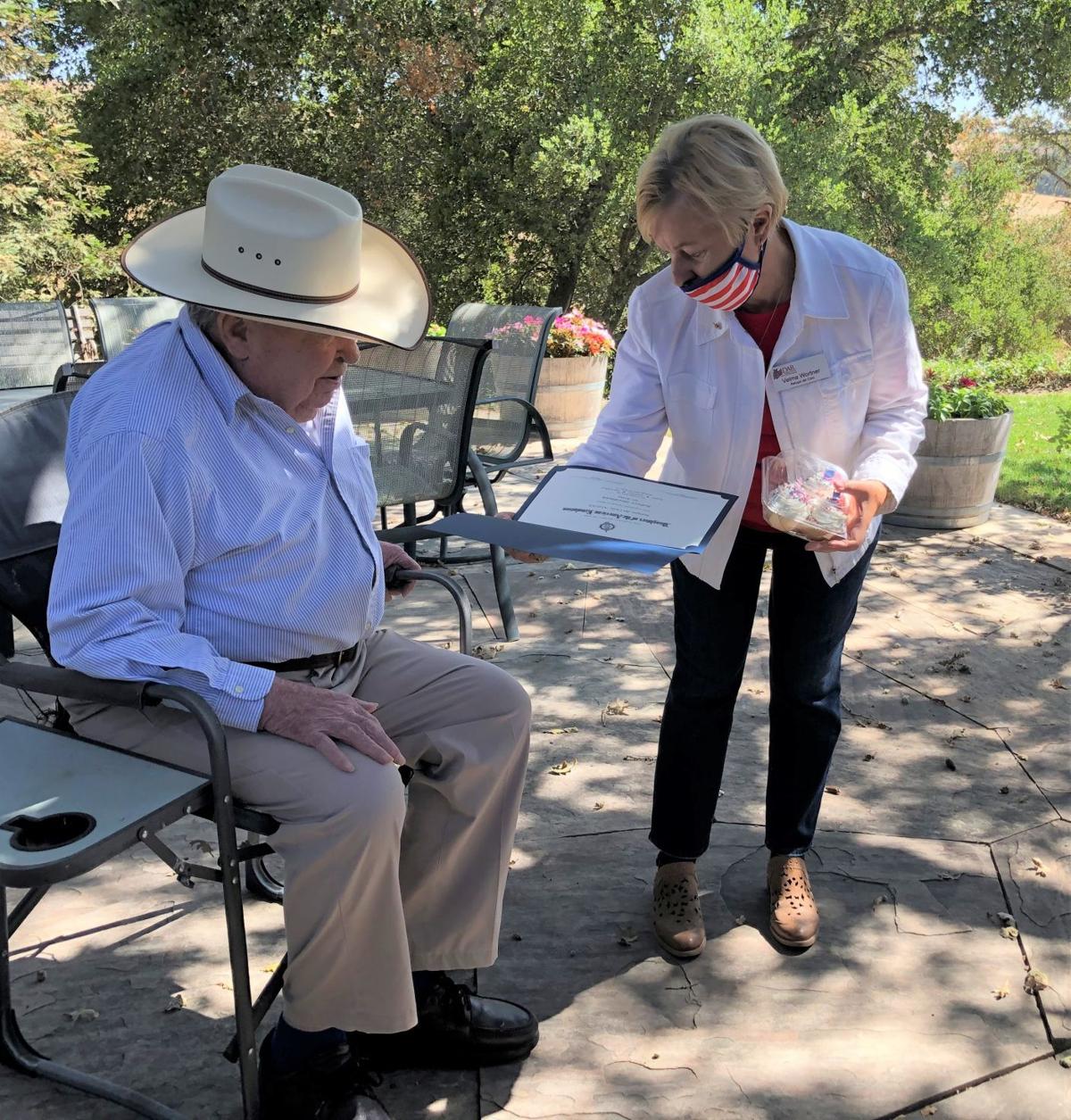 Robert “Bob” Herdman, U.S. Army, is presented with a certificate and cupcakes by Daughters of the American Revolution Regent Velma Wortner on Saturday. 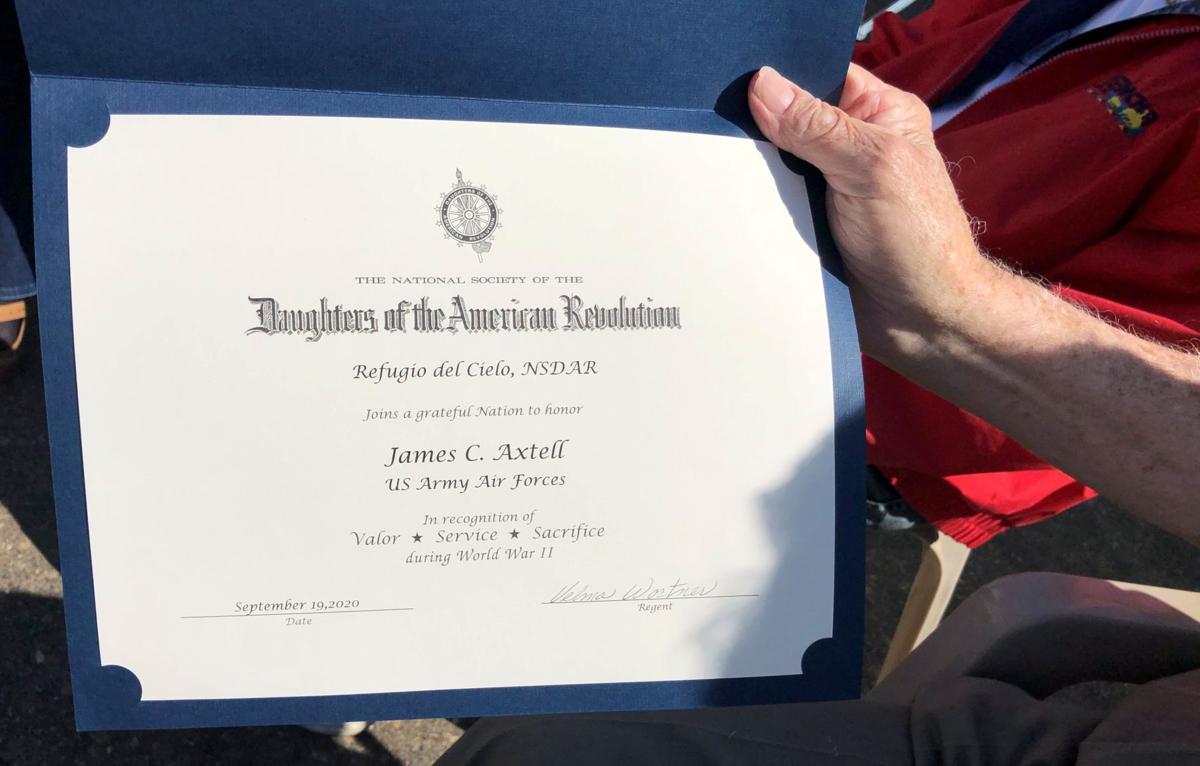 The Daughters of the American Revolution, Refugio del Cielo chapter, honored seven local veterans on Saturday, Sept. 19, to commemorate the 75th anniversary of the end of World War II.

Chapter members, along with representatives from the Santa Ynez Valley’s Veterans of Foreign Wars Post 7139, gathered at Jim Kunkle’s Santa Ynez Valley Airport hangar to honor and thank the veterans.

Post Cmdr. Alvin Salge and Daughters of the American Revolution Regent Velma Wortner introduced each veteran, thanked them for their service, presented certificates and, adding a sweet treat, gave each a box of red-, white- and blue-sprinkled cupcakes.

Hangar host Kunkle was rescued by U.S. ground troops when his plane was shot down during World War II. The injuries he sustained necessitated a trip home aboard a hospital ship with many other injured service members.

“I was the only patient on board who was ambulatory and got to walk around on the ship for the five-day trip back to the U.S.,” Kunkle recounted.

With the death of Hitler, and the Allies and the Soviet Union having invaded Berlin, the Germans unconditionally surrendered on May 8, 1945.

We now celebrate the ending of the war on Sept. 2, the date Japan agreed to the terms and signed the treaty of surrender aboard the battleship U.S.S Missouri in Tokyo Bay.

World War II lasted six years and one day, but the courage and dedication of the men and women of the military live on the memories of those who served and in the heart of a grateful nation.

The story follows the daily lives of a group of low-ranking enlisted sailors on shore leave in San Francisco during the Prohibition-era, and later, aboard the flagship USS Delphy headed...

This report was contributed by Elaine Revelle, longtime Valley resident and columnist of "The Wooden Spoon". She can be reached at thewoodenspoon@juno.com.

Mike McVicar, aged 76, passed away peacefully at his home on October 20, 2020. A native of Lompoc, Mike lived an idyllic childhood, roaming th…

Tiffani Briana Villa was born to Linda Gruebner and Trinidad Chavoya on May 4, 1969. She grew up in Lompoc with her father and brother, and la…

Jimmy Don Yeates was born to Travis and Vivian Yeates in Tucumcari, New Mexico, the second of four children on February 2, 1948 and entered in…

Michael Lee McVicar, 76, resident of Lompoc, passed away October 20, 2020. Arrangements are in the care of Starbuck-Lind Mortuary, Directors. …

Roselie Santos, 59, resident of Lompoc, passed away October 15, 2020. Arrangements are in the care of Starbuck-Lind Mortuary, Directors. www.s…

Today in History: The Statue of Liberty was dedicated in New York Harbor

Robert “Bob” Herdman, U.S. Army, is presented with a certificate and cupcakes by Daughters of the American Revolution Regent Velma Wortner on Saturday. 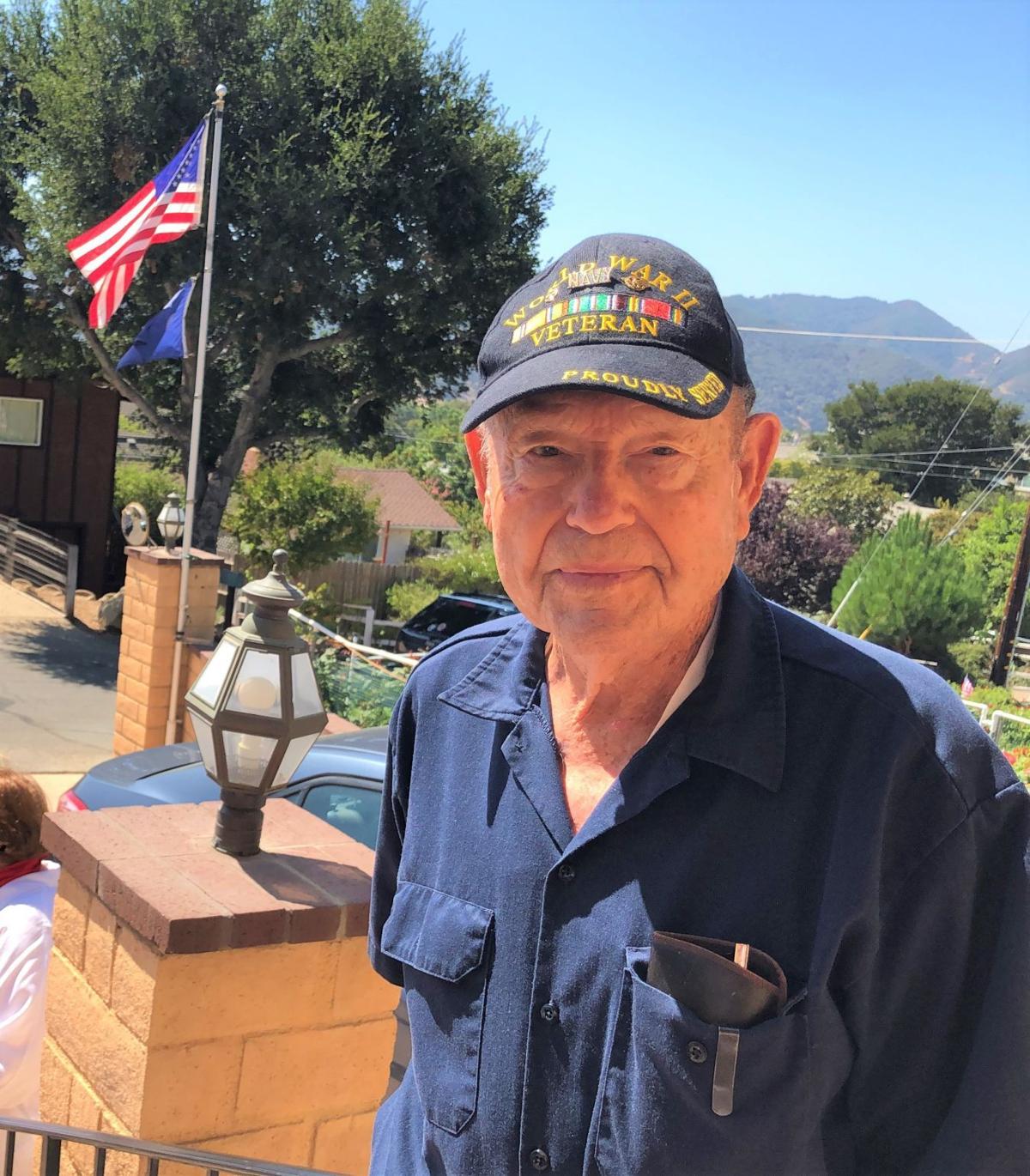 Award recipient William “Ken” Palmer, U.S. Army, accepts his accolade from the front porch of his Solvang home on Saturday.