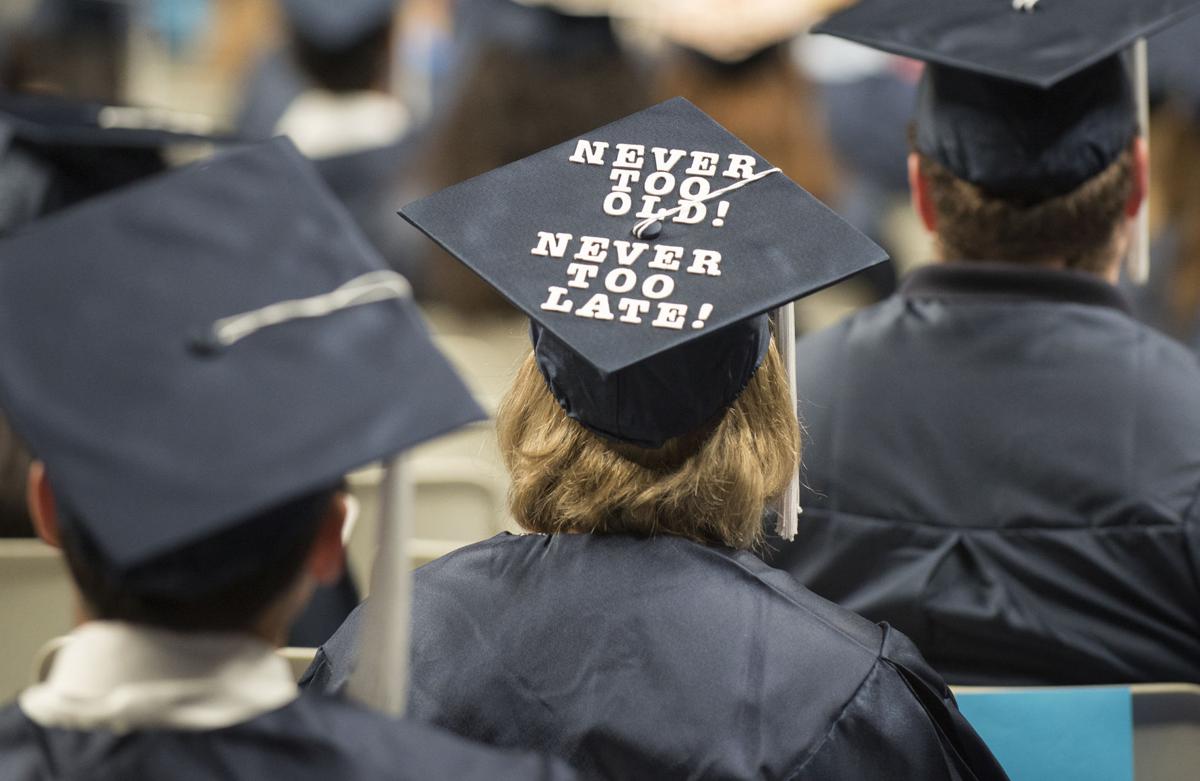 Santa Ynez Valley News Lifestyle Editor, Mary Ann Norbom, decorated her mortar board for her graduation ceremony Saturday. She has completed her bachelor's degree from Penn State after a 47-year hiatus. 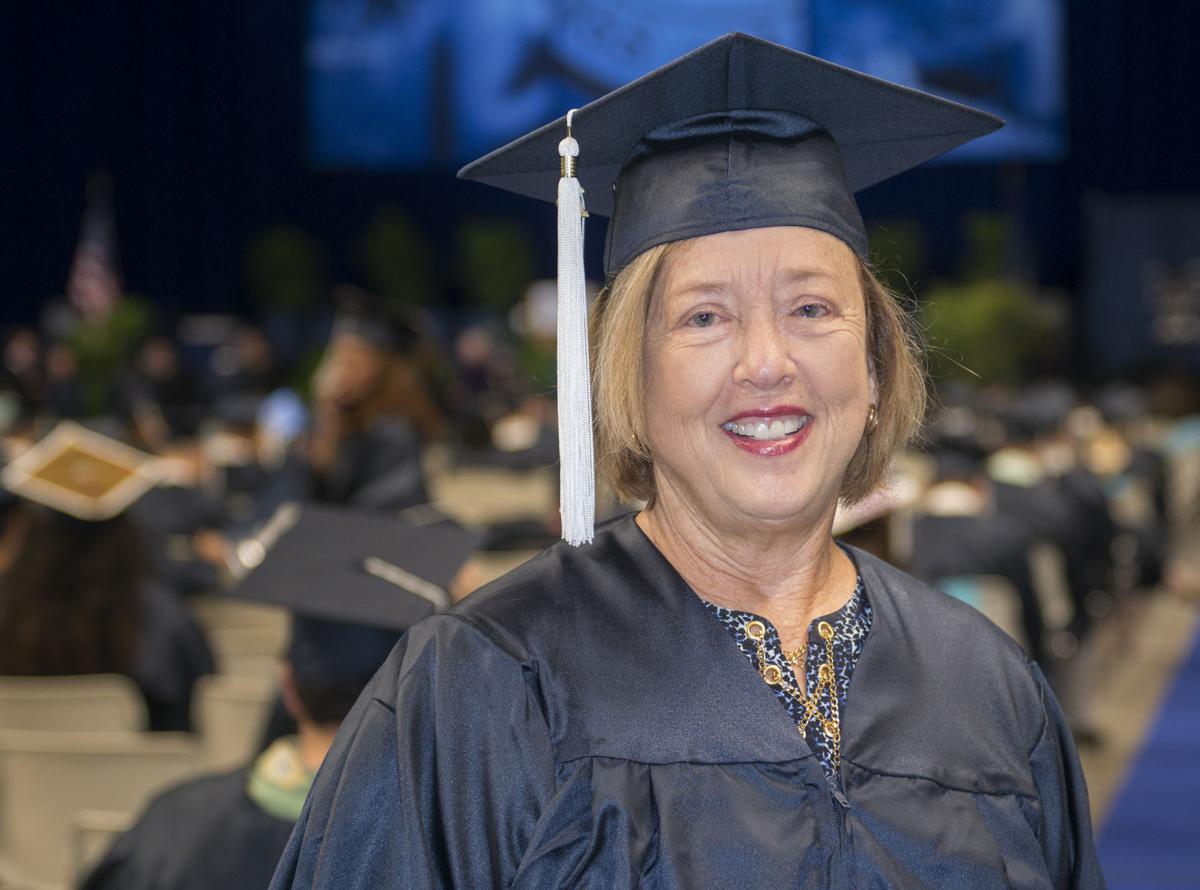 Santa Ynez Valley News Lifestyles Editor Mary Ann Norbom, who left Penn State University in 1969, recently completed her bachelor’s degree online through World Campus.  The story of her decision to go back, and her journey to receive her degree was recently featured in Penn State News. Find her personal account on Page B1.

Nearly 40 years ago, Star Magazine reporter Mary Ann Norbom was on the trail of Dolly Parton, who was crossing over to mainstream pop from country music.

Later, in the 1990s, Norbom appeared on the TV show “Hard Copy” to lend her expertise on celebrities. In the 2000s, Norbom worked at OK! Magazine when it launched in the United States.

Now, after a career in celebrity journalism spanning five decades, Norbom is no longer looking for celebrity news scoops. Instead, she’s taking care of unfinished business from 47 years ago and finishing her college degree.

Norbom, 67, graduated from Penn State on Saturday, Aug. 13, with a bachelor’s degree in political science, which she began in 1967. She finished the degree online through Penn State World Campus.

“It was unfinished business — that’s what I’ve said to people,” said Norbom, who has worked full-time as the Lifestyles Editor for the Santa Ynez Valley News while completing her degree online. “It’s just something that I decided to do for me.”

Norbom got married in 1969, left Penn State halfway through her junior year and moved with her husband to Philadelphia. Her first job was with TV Guide compiling listings.

Working as a reporter came next, when she moved to New York and got hired at Star Magazine. One of her most memorable stories was about Parton, the country singer. The magazine sent Norbom to the singer’s town in Tennessee, where she interviewed her friends and family, including her husband.

“Her people flipped out afterwards that he had invited me in for lemonade,” Norbom said.

Norbom’s stints on TV had her producing segments on baseball legend Mickey Mantle and actor Robert Mitchum on “Entertainment Tonight.” At “Hard Copy,” she did on-camera interviews as the go-to expert on late actor Chris Farley.

It was in 2010, when her husband died, that she decided to slow down her fast-paced life. She moved to Solvang and worked part time for RadarOnline.com, a celebrity news website that was just launching.

She’d also been looking into finishing her college degree.

“One day, I just put the Penn State website up, and it was like the lightbulb went off,” she said. “Maybe I could do this online.”

In the summer of 2014, she re-enrolled in Penn State through the World Campus with all 75 credits she completed in the 1960s. She started with a few credits, but then took more and more while working at the local newspaper.

By the end of spring 2016, graduation was just a few months away.

But she still wanted the classroom experience she left behind years ago. When she found out Penn State offered classes in May called “Maymester,” she was sold.

She worked remotely from State College while living in a hotel and took two classes on campus. She returned to California in June to finish out her last class to get her degree.

Norbom said she’s had “an amazing experience” returning to Penn State, so much so that she flew back to State College to attend graduation. She was even invited to be a guest speaker at a reception for World Campus students the day before the university-wide ceremony.

She also rented a house to throw herself a graduation party for her family and friends.

“When I made this decision, after I re-enrolled and told my sisters, one of them said, ‘You are going to walk, aren’t you?’” Norbom said. “And I said, ‘Of course I am.’”

A beloved daughter, sister, aunt, granddaughter, cousin and friend, Lacey Brooke Porter passed away at 41 on January 10, 2020. Born in Lompoc,…

Dear Abby: Separated man is in no hurry to file for divorce

I have been dating my boyfriend for almost a year. I love him, and we have an undeniable connection I have never had with anyone else. The problem is, he's separated but not yet divorced from his wife.

CAPA Pet of the Week: Blue

Blue is a 2-year-old male, blue weimaraner available for adoption at Animal Services – Lompoc. This handsome boy is an owner surrender who has…

Packers or Raiders? Jim Kelly or Joe Montana? Chuck Noll or Don Shula? How much trivia do you know from 52 years of Super Bowls?

DEAR ABBY: I'm engaged to a wonderful guy. He is very sweet, and I'm beyond thankful for him. I wouldn't trade him for the world. But he has a character flaw that's hard to ignore. When he gets frustrated, he screams out loud and takes a while to get himself together.

DEAR ABBY: When I was a junior in high school, I sustained a neck injury (at school) that damaged my spinal cord. I feel anger toward them because of their inaction regarding my injury and not suing the school. Do you think I should bring this up to them? -- INJURED IN TENNESSEE

VIVA Pet of the Week: Curly

Meet Curly. This adorable poodle mix has found himself homeless. His human dad has had to go into convalescent care. He is approximately 4 yea…

DEAR ABBY: I have been dating a great guy for a year and a half. He's funny, smart, and when he comes to my house, he washes my dishes and plays with my son. The downside is, he has zero ambition, zero motivation and no life goals. What should I do? -- HOPELESSLY VEXED

“Judy” Barbara Kain, 87 years old of Lompoc, California, passed away on January 13, 2020 peacefully at home after a long hard battle with cancer.

Pamela was born in Kansas to Kathrine and Landon Stableford and is survived by her older brother, Lanny.

Santa Ynez Valley News Lifestyle Editor, Mary Ann Norbom, decorated her mortar board for her graduation ceremony Saturday. She has completed her bachelor's degree from Penn State after a 47-year hiatus.