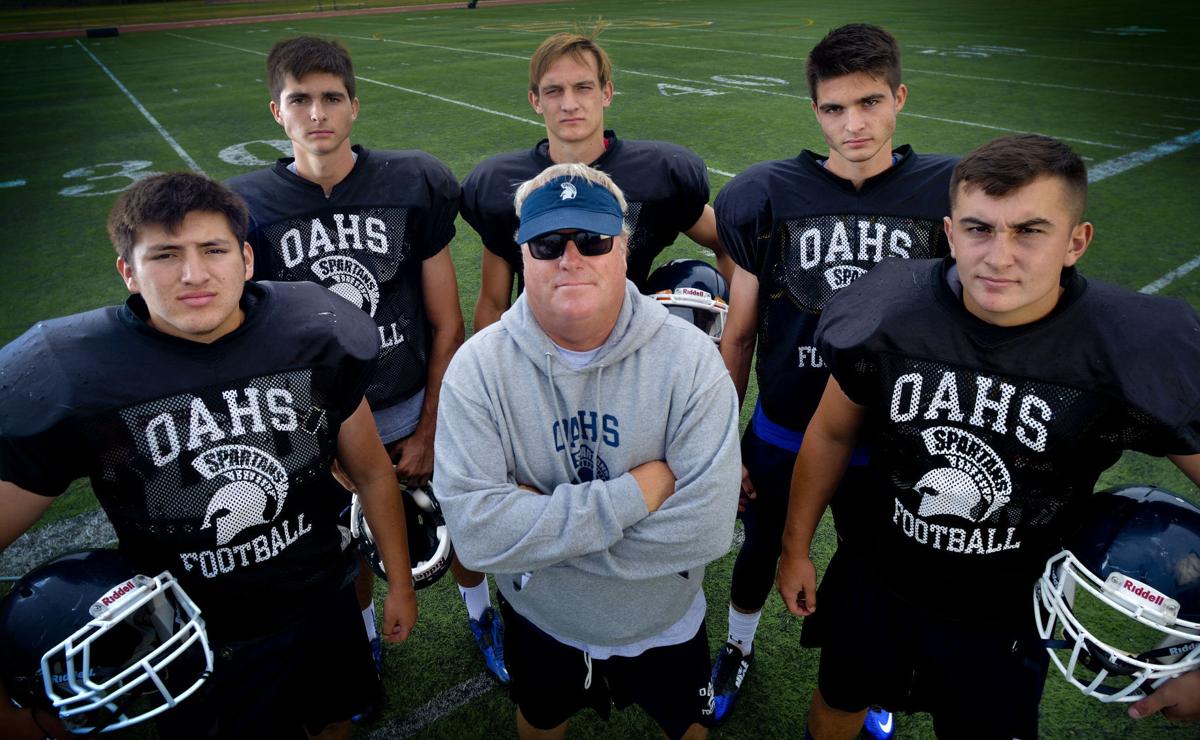 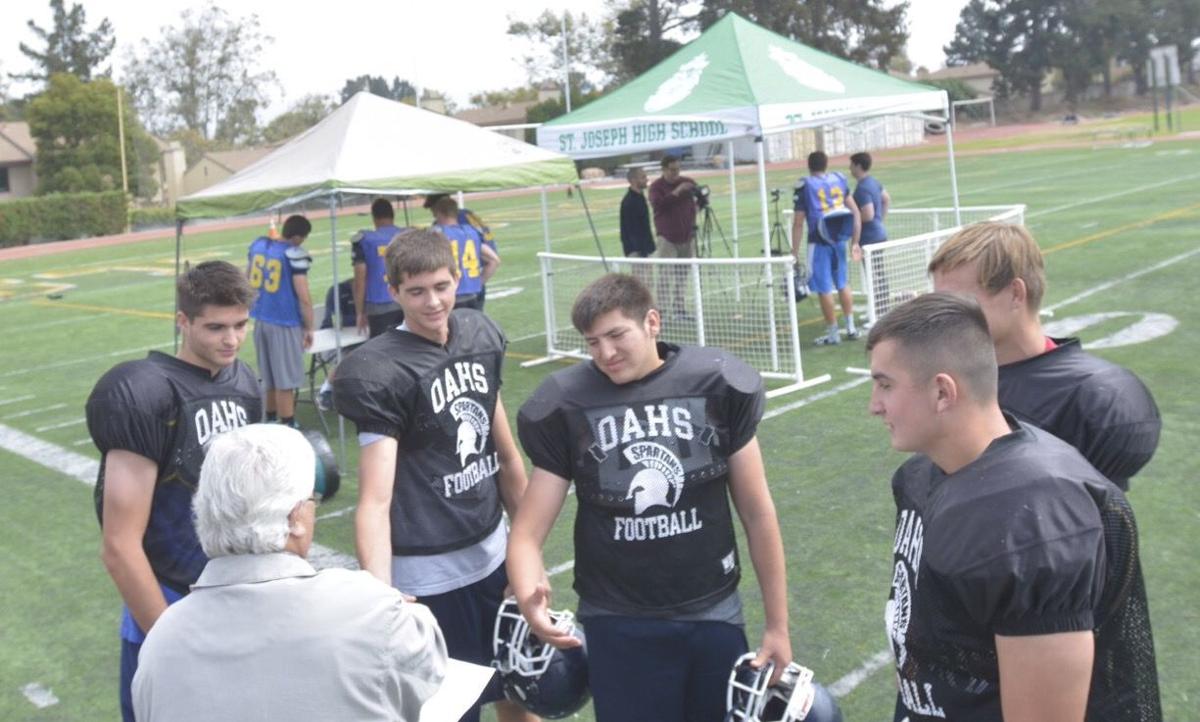 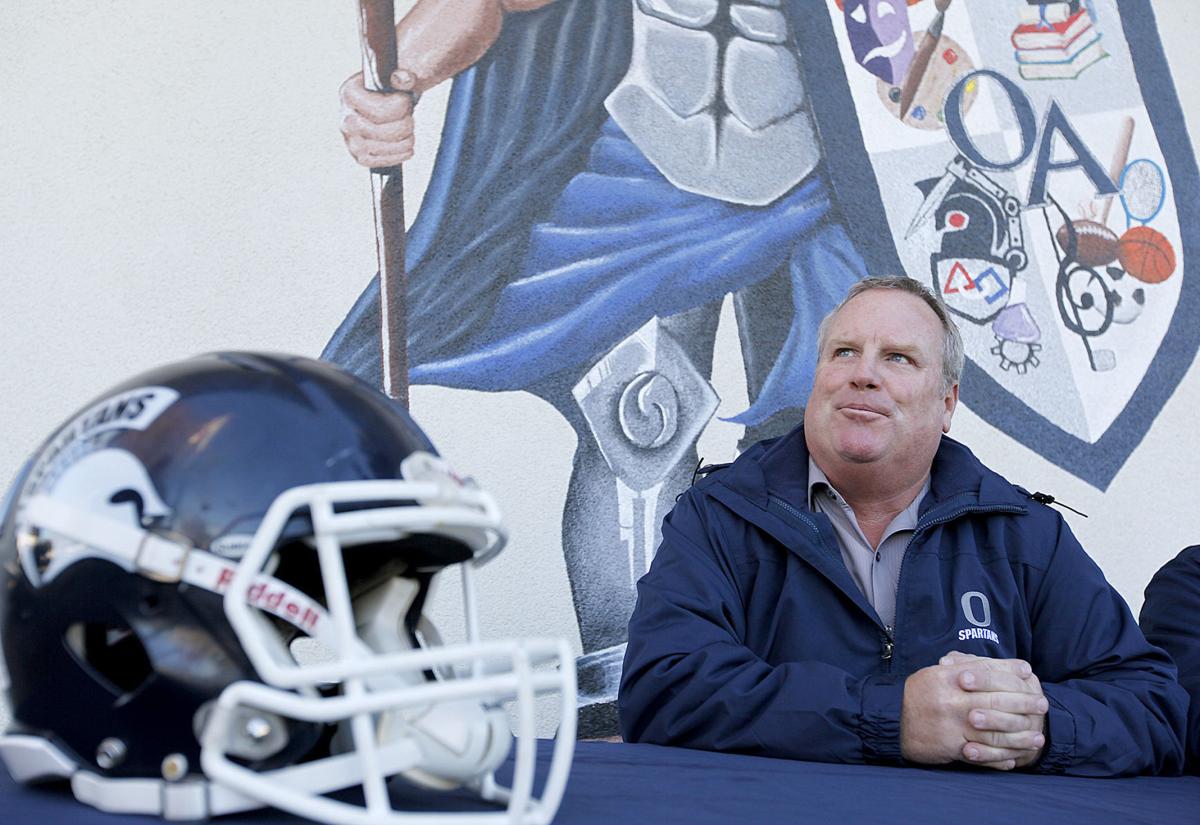 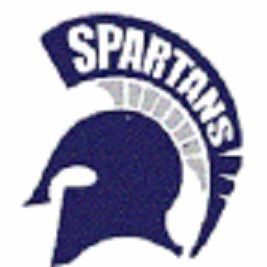 Doug May is itching for some action.

Orcutt Academy’s first-year head coach can’t wait for his Spartans to hit the field on Aug. 26.

“We’ve got some good kids — really intelligent, smart, love the game of football,” said May at the LCCN annual football Media Day. “They are really looking forward to getting after it in our first game.”

After spending years as an assistant coach on 11-man teams, May’s first shot as a head coach comes in the wonderful world of 8-man.

“It truly is the most exciting football,” said May. “Coming from 11-man, I have to remember there’s a couple extra gaps there. There’s a lot of space and defending that is interesting. You’re basically one tackle away from breaking it for a touchdown so how we defend it is putting the right kids in the right spots and be disciplined and hopefully we can keep their scores down.”

There is also a lot of learning going on as May and his coaching staff get to know their new players.

May spent the last 10 years as a position coach at Righetti High.

He is just the second head coach in OA history, taking over for Tony Payne who started the program in 2012.

Payne regularly led the Spartans to the 8-man playoffs.

The Academy ran off five straight wins to open the 2015 season before going just 1-3 in Condor League play.

But the Spartans get a lot of respect from the CIFSS, earning a spot in the Division 1 playoffs where they lost in the first round to San Jacinto Valley Academy.

“Coach Payne built a great program,” said May. “We’re going to try to build on that tradition.”

The Spartans have a lot of talent on the offensive side of the ball.

Darin Miller is back for his second season of running the offense.

“He’s a really heady guy,” said May. “We’re working on his footwork and where he needs to be handing off and that type of thing. He’s a junior this year so I’m really excited that I’m going to have him for two years.”

The Spartans will run a basic “I” formation with a fullback and tailback lining up behind Miller.

The team will be able to keep fresh legs on the field by using two tailbacks and two fullbacks.

“Jared Sutton will be our starting tailback and John DeMarco will also see a lot of playing time, so we’ll be swapping those two guys out,” said May. “And we’ve got two fullbacks that are going to be interchangeable. One of them is Nate Luna Vasquez, he’s a good hard working kid, and Dominic Natell who is as strong as an ox.”

Defenses will be seeing double when twin brothers Cole and Mitch Carpenter line up at wide receiver.

“They’re both 6-4, really good targets for our quarterback to throw to,” said May. “They’re seniors so we want to send them off with a bang.”

The Spartans will try to set up their passing game with play action passes but May wants Orcutt Academy’s opponents to fear the Spartans’ running game first.

The heart and soul of that offense runs along the line.

Alex Andrade and Justin Zepeda will lead the downhill game.

“We’re pretty solid up front. Alex is one of our guards and Justin is our center,” said May. “Justin is the general of the huddle, he controls the huddle, makes sure they line up correctly, so we’re going to run behind those guys. They are a real key component to the offense.”

The Spartans are also working hard on May’s defense.

May plans to run an odd front with three down lineman, two linebackers, two corners and a safety.

“We’re doing that so we can stop the run, so we can fill those gaps and keep them from breaking a long run,” said May. “It’s the same concept as 11-man but with 3 fewer players on the field.”

But May has other defenses he can work in, depending on opponent.

“Especially against spread teams we’ll have an extra defensive back out there just so we can defend the pass,” said May. “I’ve told the boys, when you’re on defense, you have to be that guy that is angry enough to go make a tackle.”

The Academy is a member of the Condor League along with Cate, Villanova Prep, Thacher and Laguna Blanca.

“It’s one of the most competitive leagues in 8 man football and gets a lot of respect from the CIF,” said May. “We’re also going to playing Mojave in our third week. They’re defending CIF champions. They have a pretty good program there which is a good challenge for us to see how we’re going to stack up in our league.”

While they open their season at home against Chadwick from Rolling Hills, Orcutt Academy will have a different home stadium for that Aug. 26 game.

“This is the first year since Orcutt Academy started playing football that all three of the city’s public schools have a home game on the same Friday night,” said May. “So we’re going to play our first game down at Santa Ynez so we’re going to have a little bit of a road trip for a home game.”

Even though the Spartans have to be at home on the road, May and his players can’t wait for the season to begin.

Base offense: I-backs with slot receiver