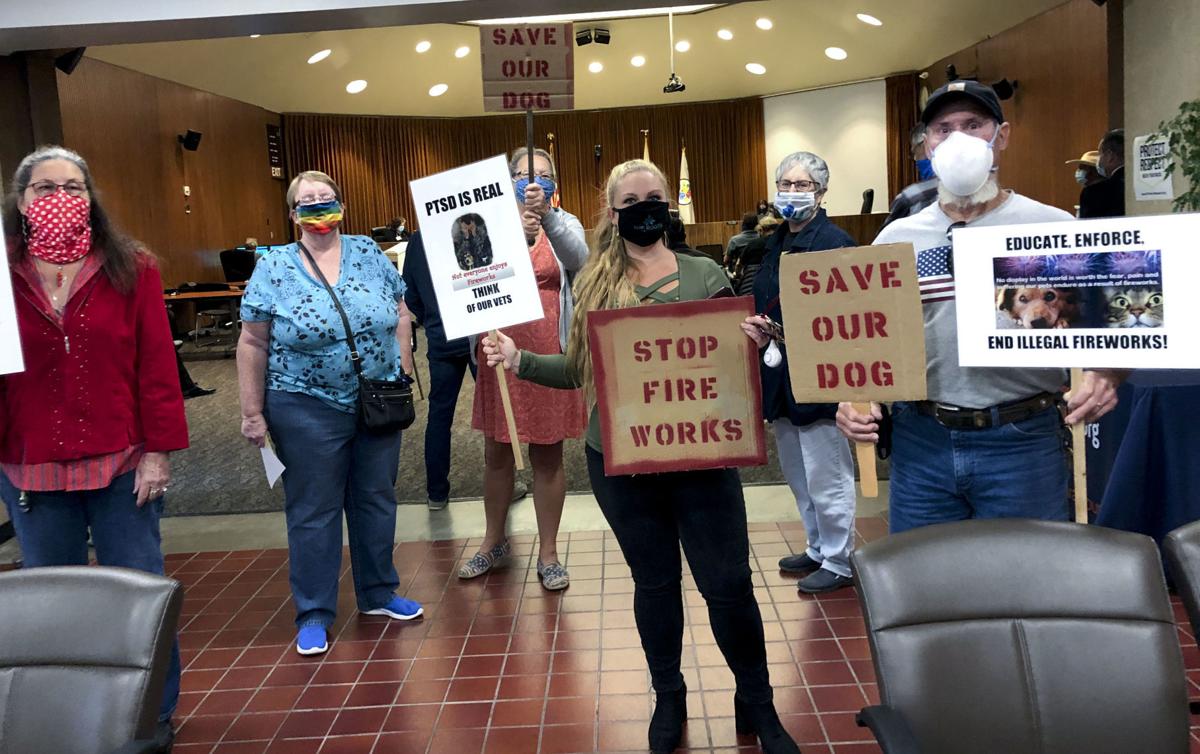 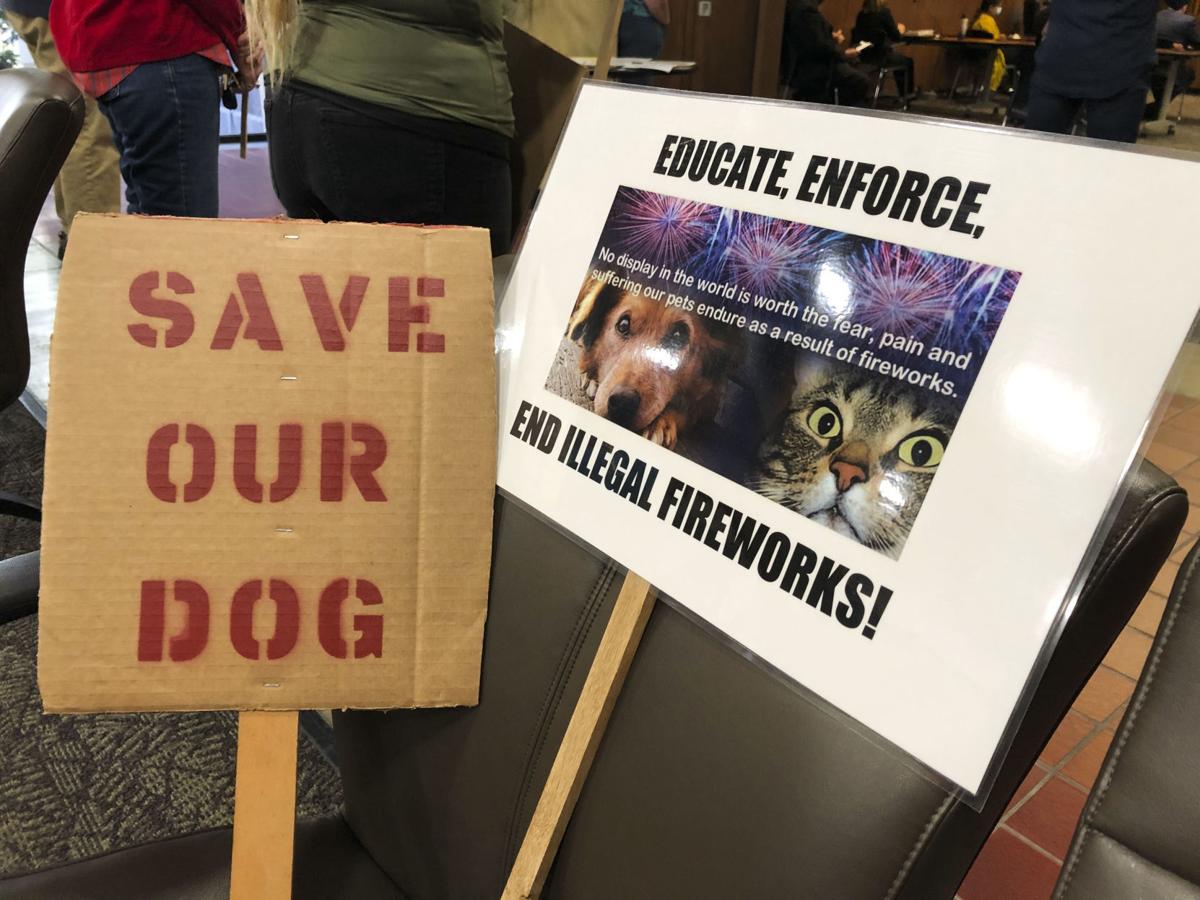 Some of the signs carried by members of the Lompoc Against Fireworks group are shown at City Hall ahead of Tuesday night's meeting of the Lompoc City Council. 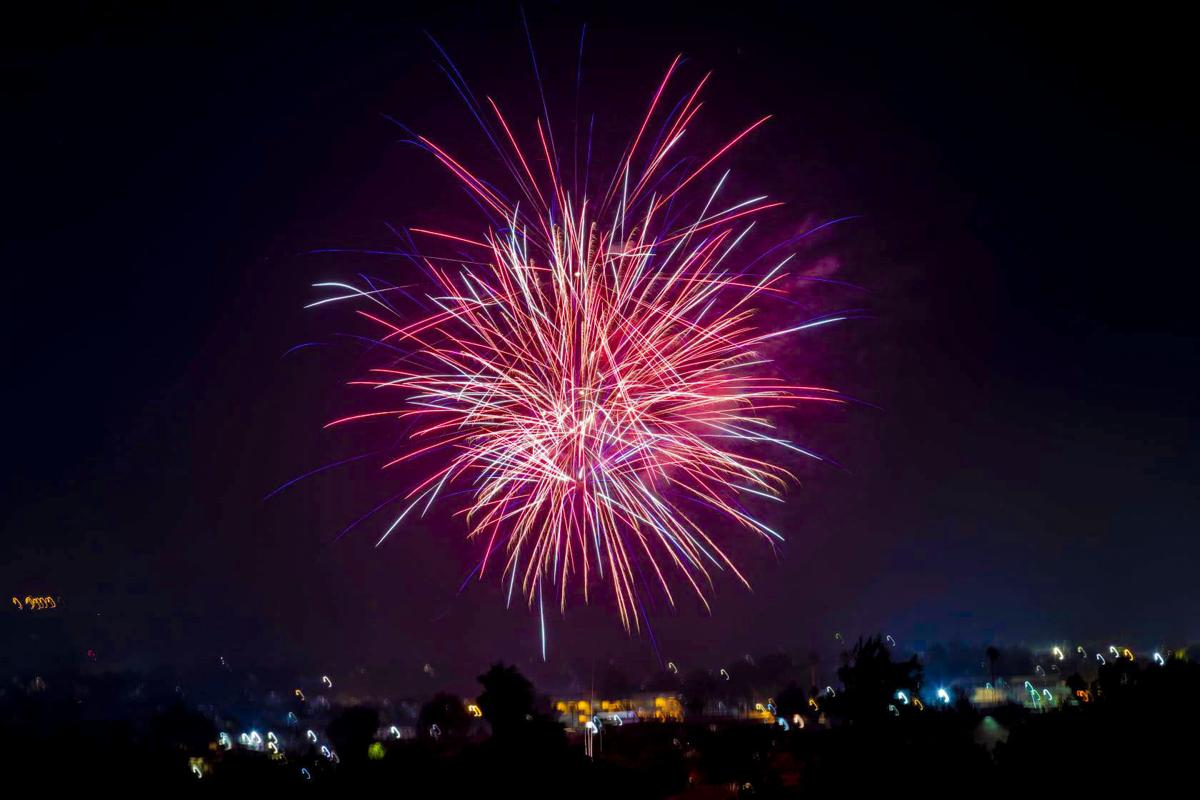 Illegal fireworks fly over Lompoc on the Fourth of July.

Although the fireworks activity in Lompoc has calmed significantly since the end of the Fourth of July, a group of residents angered by months of explosions is just getting fired up.

More than two dozen Lompoc residents, many with signs expressing displeasure with fireworks, rallied outside City Hall ahead of the City Council meeting on Tuesday. Once the meeting began, most of them filed inside to voice their concerns and call on the governing body to ramp up enforcement of fireworks violations and to reintroduce a complete ban on all fireworks in the city.

Trevon Babcock, who helped organize the protest through the more than 650-member Lompoc Against Fireworks Facebook group, pleaded with the City Council to do something about an issue that Babcock said has gotten “out of control.”

“This is an important quality-of-life issue for the majority of residents, and visitors, too,” Babcock said. “It’s a human rights issue. … I want my rights to peace and quiet back.”

The spotlight on fireworks has burned increasingly brighter in recent weeks as the Lompoc Valley was inundated with professional-grade pyrotechnic explosions on a nightly basis from as early as mid-May through July 4.

Although fireworks have been almost nonexistent in the city since sunrise on July 5, the weeks of illegal explosions were capped off on July 4 with a steady rumble of mortars and aerial light shows from sundown to early into the next morning.

People have routinely complained about the noise and fire dangers presented by the materials, as well as the negative effects that fireworks can have on pets and people with certain medical conditions, like post-traumatic stress disorder.

While the so-called safe-and-sane fireworks — those that don’t fly or explode — were legal in the city for a 13-hour period on Independence Day, the larger mortars and explosives are not legal at any time.

In June, the Lompoc Police Department revealed that it would use unmarked vehicles to locate people igniting the illegal fireworks, and the city even encouraged residents to turn in security footage that could help police identify scofflaws.

On July 6, however, the city revealed that no one submitted any footage and that the Lompoc Police Department had only issued two citations for fireworks violations over the three-day period from July 3 through 5.

That lack of impactful enforcement was a common complaint among the group that spent nearly an hour making its case to the Lompoc City Council. Particularly in light of the city annually announcing that it will take a "zero-tolerance" approach to illegal fireworks.

“I love fireworks myself, but I just think we’ve got to find a better way, and the police have to show up,” said LeeAnn Knodel, who noted that she’s had altercations with neighbors over fireworks and has had her and her pets’ normal routines upended by the constant explosions. “We are giving [the police] addresses; it’s simple. I want to support our police officers … but this is obviously a major problem. And I’m not gonna stop until we see a fix.”

Many of the anti-fireworks protesters pushed for the City Council to include the topic on a future agenda.

Councilman Jim Mosby had already requested that city staff develop a report with information on fireworks violations and the associated costs. City Manager Jim Throop said Tuesday that staff was still working on that report and that it could be ready for review as soon as the council’s next regularly scheduled meeting on July 21.

It's possible the City Council could take another look at, and possibly change, the entire ordinance after that review.

Babcock said he would like to see the city develop a fireworks task force, and allow citizens to serve on it.

“Let’s lay it all out and work from the ground up to understand the issues, all aspects and people involved,” he said.

The city of Lompoc, which had historically banned all forms of fireworks, introduced its first legal fireworks ordinance ahead of the 2013 Independence Day holiday.

Under the ordinance, which is still in effect, a select number of nonprofit organizations can sell the safe-and-sane fireworks to raise funds for a set number of days preceding the holiday. The nonprofit is then able to keep a share of the profits, with the city also getting a share.

The ordinance actually outlines a “fireworks task force,” which is described as a group of city public safety officials, or other authorized personnel, assembled “to monitor, provide services related to, and enforce the provisions of” the ordinance.

The original ordinance in 2013 stated that the task force was not to exceed $10,000 in costs, but there is no mention of that amount in the current code. It was unclear if the city was still allocating a certain amount of money for fireworks enforcement.

Councilwoman Gilda Cordova said Tuesday that she’d like to see discrepancies like that brought forward and explained when the City Council reviews the staff-produced fireworks report.

“I would like to know where is that funding going, and why are we then telling our residents that we can’t police this, or we can’t do something about it, when there is some funding out there that has been collected, or is being collected,” she said.

While many of the people who participated in Tuesday’s rally were in favor of a complete ban on fireworks, not everyone wanted to go that far.

Some speakers and members of the council stressed that a distinction should be made between the safe-and-sane items and the illegal ones.

“The safe-and-sane are not the problem,” Councilman Victor Vega said, while giving support for a future City Council review of the city’s fireworks ordinance. “The problem is illegal fireworks throughout this nation are running rampant.”

Resident Scott Snyder said he agreed that Lompoc had a fireworks problem, “but to punish law-abiding citizens who use the safe-and-sane … is the low-hanging fruit.”

“That’s not going to fix the problem,” Snyder said. “You’re not going to stop illegal fireworks by stopping safe-and-sane fireworks sales. As has been pointed out, it's a win-win situation: It helps those serving the community as well as helps the city of Lompoc.”

Some people have also argued that illegal fireworks will remain, at least to some extent, regardless of the legality of safe-and-sane items.

Further, fireworks proponents have pointed to the fact that Lompoc has had no reports of serious fireworks-related injuries.

Still, several of the people who said they were fed up with the massive amateur pyrotechnic displays — many of whom described Lompoc's Fourth of July atmosphere in militaristic terms — pushed for the city to at least try to get a handle on the situation.

"Although some apparently find the discharge of fireworks to be fun, it comes at a huge risk (toxins/burns/fires) and also it is hurting our state of mind," Lompoc resident Lee Knodel wrote in a letter submitted to the City Council. "We are already living in a very high stress time of COVID-19; my message would be that we have to take care not to further hurt one another."

Public safety officials were kept busy in Lompoc during a festive — and very loud — Fourth of July weekend, as the city reported fielding more than 100 calls related to fireworks and also sent crews to multiple vehicle crashes and nine dumpster fires.

Staff at the Lompoc Aquatic Center, located at 207 W. College Ave., welcomed back lap swimmers and began reintroducing some other programs on the first day of public access since the facility was closed on March 13 due to the COVID-19 outbreak.

The City Council voted 4-0 — Councilman Dirk Starbuck recused himself — to approve the request from the YMCA, which reported major revenue losses after closing its doors in mid-March due to the COVID-19 pandemic.

Some of the signs carried by members of the Lompoc Against Fireworks group are shown at City Hall ahead of Tuesday night's meeting of the Lompoc City Council.

Illegal fireworks fly over Lompoc on the Fourth of July.