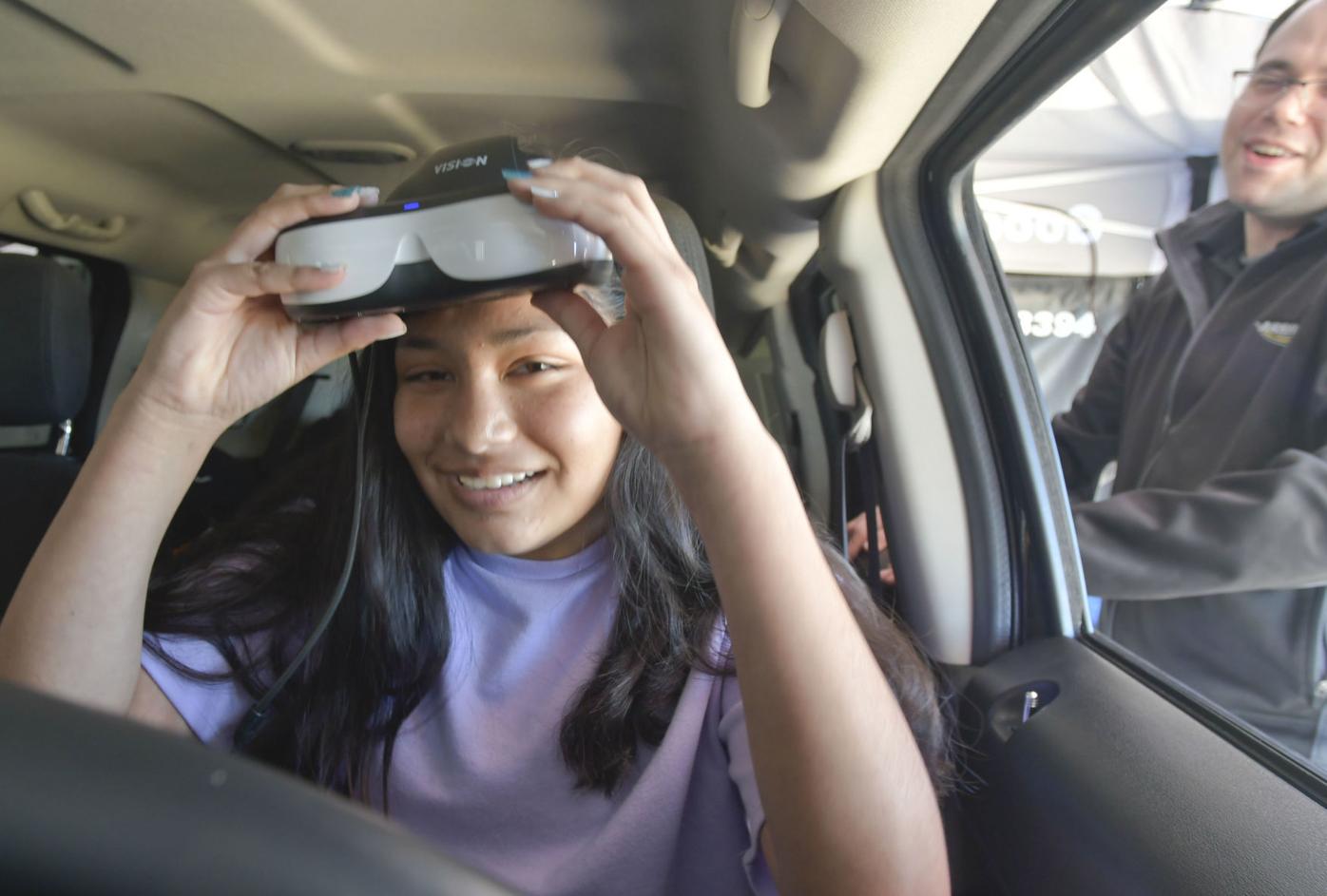 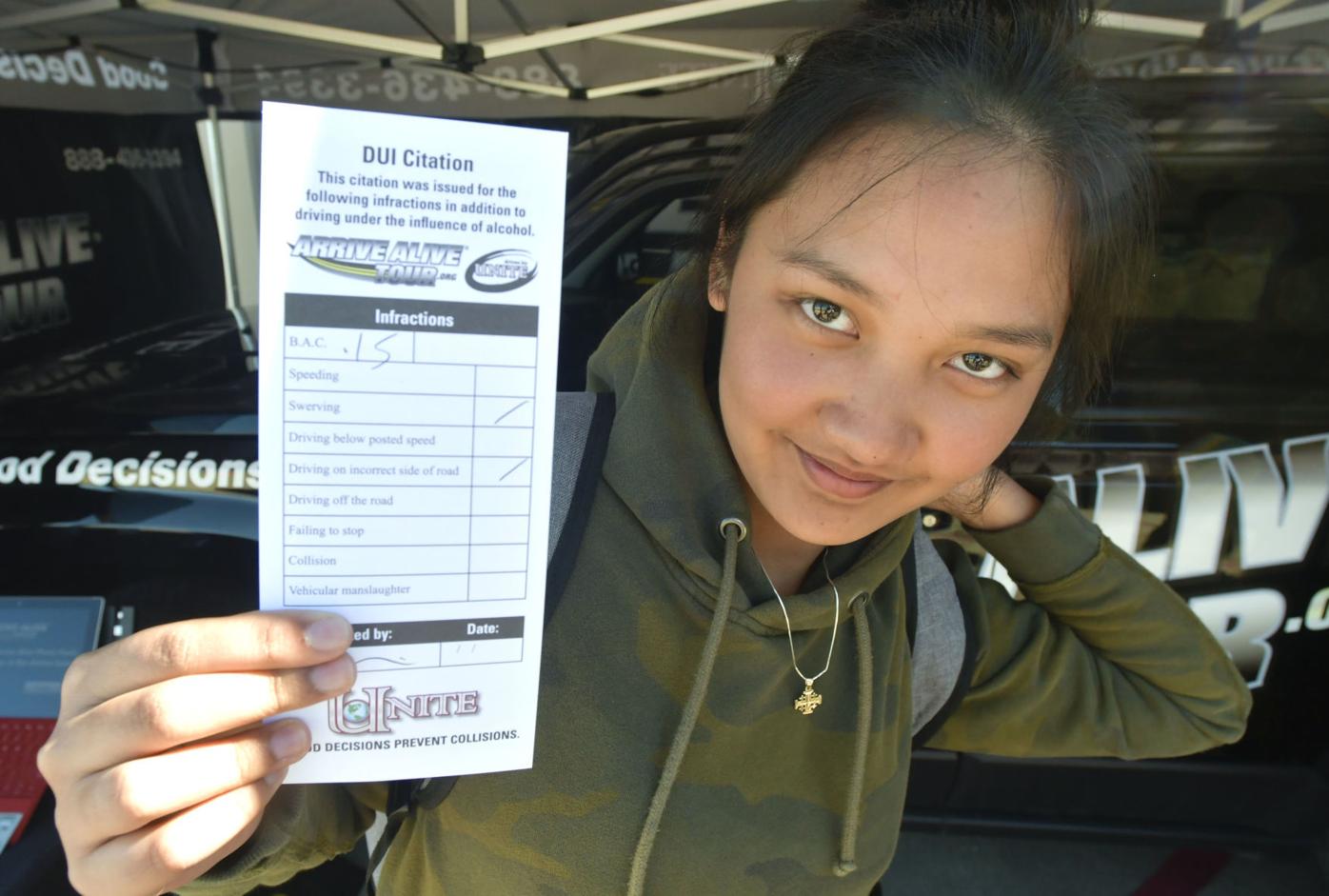 Jillian Picache shows off the “citation” she received for her poor driving in the DUI simulator at Lompoc High School on Wednesday. 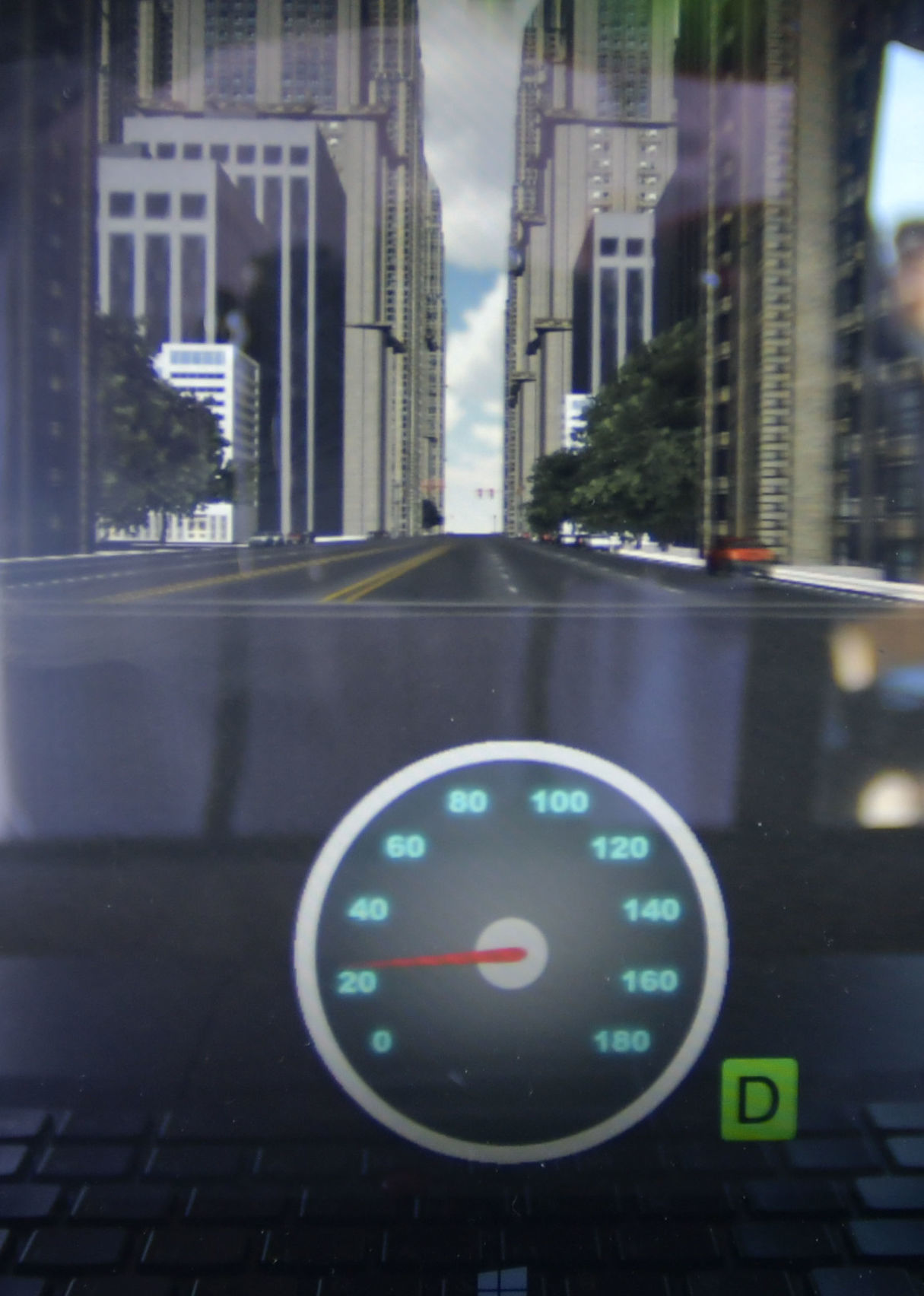 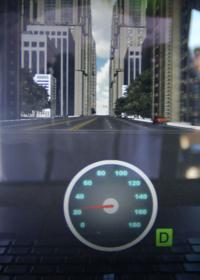 The Arrive Alive simulator shows a city scene as the operator attempts driving under the influence. 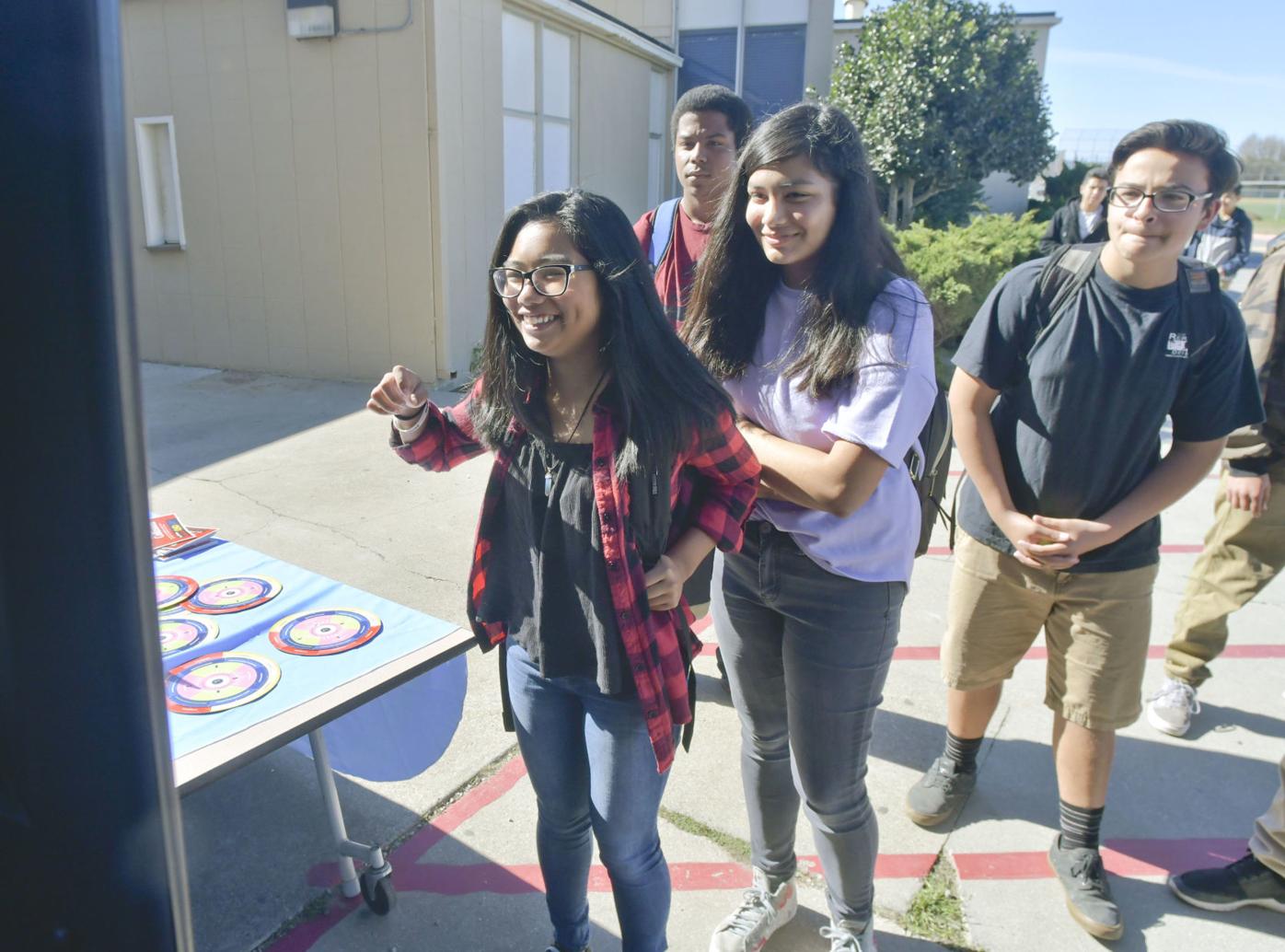 Diana Alcantara and Natalia Zepeda watch a classmate’s attempts to drive in the DUI simulator at Lompoc High School on Wednesday.

Jillian Picache shows off the “citation” she received for her poor driving in the DUI simulator at Lompoc High School on Wednesday.

The Arrive Alive simulator shows a city scene as the operator attempts driving under the influence.

Diana Alcantara and Natalia Zepeda watch a classmate’s attempts to drive in the DUI simulator at Lompoc High School on Wednesday.

Although 14-year-old Adam Beck hasn’t yet reached the legal driving age, the Lompoc High School freshman got an up-close look Wednesday at what can go wrong when he does get behind the wheel.

Beck climbed into a Jeep SUV behind the Lompoc High gym Wednesday morning and, while wearing special glasses, attempted to navigate the vehicle down a simulated street while experiencing effects resembling a blood alcohol content level well past the legal limit.

It did not go well.

“I crashed right away,” he said afterward. “It was bad.”

Beck was not alone.

Dozens of Lompoc High students, most of them freshmen, took turns going through the simulator, which was brought to Lompoc by UNITE as part of its national Arrive Alive Tour. In addition to mimicking the effects of drunken driving, the program also allowed students to try a distracted-driving simulation in which they were prompted to send text messages while navigating the vehicle.

The Arrive Alive program, which also included an impact video for students and several brochures and other handouts, was brought to Lompoc by the Michigan-based UNITE thanks to a sponsorship from Cottage Hospital. The next Lompoc Valley stop on the tour is Cabrillo High School, where the program will be offered from 7:45 a.m. to 2:30 p.m. Monday at the Vandenberg Village campus.

Lompoc High teacher and football coach Andrew Jones watched Wednesday as several students from his health class attempted the simulation. He said he was glad to see the students engaging in an exercise related to such a critical issue.

“Everybody has probably been directly affected by an alcohol-related incident,” Jones said.

“They’re about to get their driver’s license and get behind the wheel, so it’s about that time for them to get a little more responsible,” he added, referring to the students. “Hopefully, this is something that schools can incorporate a couple times a year just so the word continues to get out.”

Wednesday was the first time the Arrive Alive Tour made a stop in the Lompoc Valley. Jessica Aten, a pediatric injury prevention specialist at Cottage Hospital, noted that Cottage began partnering with UNITE to offer the program in Santa Barbara County about a year and a half ago.

Aten’s role at Cottage is to cut down on kids arriving at the hospital’s trauma center with preventable injuries. She said that programs like Arrive Alive help inform kids in a fun, engaging way.

“This gets them thinking,” she said, noting that new teen drivers are much more likely to text while driving than drive under the influence. “It gets the conversation going and hopefully it can change some behavior out there — that’s the goal.”

Lompoc High freshman Jessica Lara also crashed in her simulation, which focused on texting and driving.

“It was kind of hard, but it was pretty fun, though,” she said. “You had to look up and down at the same time.”

After each student completed the simulation, he or she was given a citation noting all of the laws they broke. For Beck, that citation included speeding, swerving, driving off the road and causing a collision.

Beck said that he has some experience driving on private property. When weighed against that, he said he didn’t find the simulation to be a perfect representation of actually getting behind the wheel of a car.

“I’ve driven a real car before — but not drunk, so I didn’t know about that part,” he said. “But it didn’t really seem like driving a real car to me.”

Still, he said he thought the program was worth staging for young and soon-to-be drivers.

“I guess some kids probably need the help to know (not to drink or text and drive) because they’re not the brightest or don’t have common sense,” he said.

Mallory McKenzie, a representative of UNITE who helped put on Wednesday’s demonstrations, acknowledged that the simulation isn’t an exact replica of real life — the drunken driving simulation doesn’t account for tolerance, for example — but she said having an actual vehicle makes the exercise more real for most students.

“Normally, they might get pulled into an auditorium and get lectured for an hour,” she said. “With the Arrive Alive Tour, we bring them an interactive simulator, so they get to sit in the Jeep and they get to use the gas and the brake (pedals). Most kids get a kick out of that. And it helps them take it a little more seriously. When they’re in a crash, they’re in the car and feel the wheel and see the windshield break, so I feel like it’s impactful.”

Aten noted that Cottage tries to bring the program to three county schools each fall and spring, including Santa Maria High School on Friday. Plans may call for second trips to schools — or stops at private schools — once all the public high schools have been visited, according to Aten.

Jones said he’d be all for having the program brought back to Lompoc High.

Jones did the drunken driving simulation and said that he, even as an adult, struggled to stay on the road. He said he was hopeful the program could be expanded in the future.

“I think the big thing is to try to get maybe not just every ninth-grade student involved, but I think it’s big to send the message to the upperclassmen and have them try it out because they’re the actual ones driving currently,” he said. “I just think any time we can promote this and continue to spread the word, hopefully the less incidents we have.”

He said he felt like the message to drive only when sober has even more importance now with recreational marijuana being legal for adults in the state.

“Times are changing,” he said. “We’ll see what happens.”