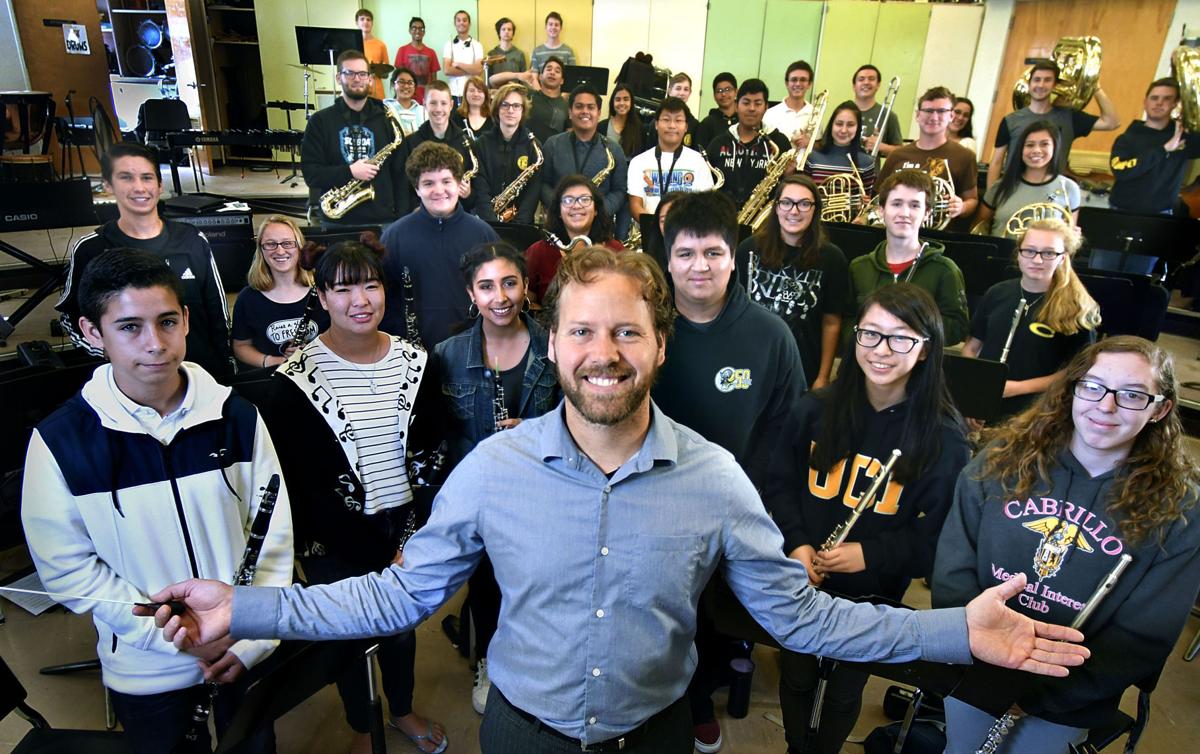 Garson Olivieri, shown during a rehearsal Friday with the Cabrillo High School Symphonic Winds orchestra, was selected as the Santa Barbara Bowl performing arts teacher of the year for the county.

Cabrillo High School's Marching Band performs in their new uniforms on May 12 at Disneyland. 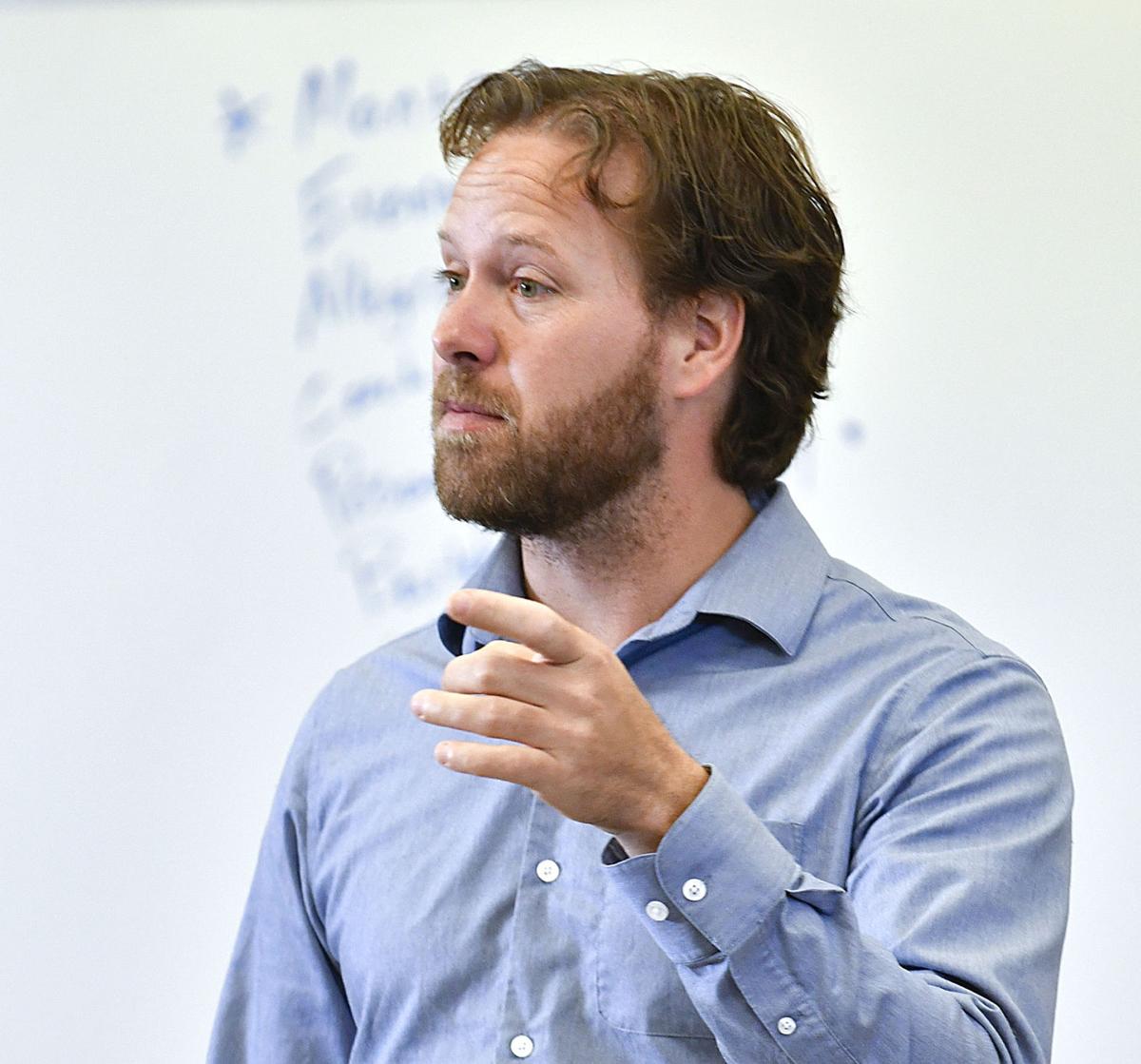 Awards line the walls of the band room at Cabrillo High School.

Appropriately enough, Garson Olivieri was in a place famous for eliciting joy and excitement when he received one of the biggest surprises of his career.

Olivieri, a music teacher and band director at Cabrillo High School, was with his marching band students as they prepared to perform in a parade at Disneyland on May 12 when fellow Cabrillo teacher Chris Ladwig made an announcement: Olivieri, who also teaches music at Los Berros Performing Arts Academy, had just been selected as the 2018 Santa Barbara Bowl performing arts teacher of the year for Santa Barbara County.

“It was a very touching moment,” Olivieri said this past week, as he reflected on the occasion.

The honor was publicly revealed five days later by the Santa Barbara County Education Office (SBCEO), which created the award in 2015 through a partnership with the Santa Barbara Bowl. Olivieri is the third recipient of the award and the second from the Lompoc Valley, joining inaugural winner Sarah Barthel, a drama teacher at Lompoc High School. Last year's winner was Brett Larsen, a music teacher at Adams Elementary School in Santa Barbara.

Olivieri will be recognized at the annual countywide Education Celebration planned for Thursday in Buellton, and he will also be honored during the fifth annual “A Salute to Teachers” ceremony, scheduled to take place Nov. 4 in Santa Barbara.

“One of (the) Santa Barbara Bowl’s Education Outreach priorities is ensuring access to the performing arts for all youth in Santa Barbara County,” said Graham Farrar, the Bowl’s Education Outreach Committee chair. “Educators like Garson play a vital role in positively enhancing the lives of students every day. We thank Garson for his dedication to his students and to his community.”

Olivieri said he had no idea that he was even being considered for the honor.

Ladwig, a science teacher at Cabrillo, got the ball rolling by collaborating with school administrators and parents of students to prepare a nomination letter for Olivieri.

After hearing about the effort that went into nominating him, Olivieri said he had a mix of “shock, surprise and gratitude.”

“All of these parents who wrote for the application give so much of their time and energy to the program as well,” he said. “They plan the logistics for events and fundraisers and trips that we go on for competitions.

"They give tirelessly of themselves and then they go and nominate me for an award,” he added, laughing. “We also have a very supportive administration that recognizes the value of music education and supports us in every way they can find.”

Olivieri is in his sixth year at Cabrillo High School, where he directs the school's marching, jazz and concert bands, as well as the school's string and symphonic winds orchestras. For the past two years, he has also taught fifth- and sixth-grade band students at Los Berros.

Before the Los Berros job, Olivieri spent four years teaching at Vandenberg Middle School in addition to his gig at Cabrillo. He is set to become full time at Cabrillo this fall.

Olivieri said he has enjoyed the challenge of working with younger students, whom he said forced him to “relearn how to teach.” One of the highlights of his time with the elementary kids, he said, was when the Los Berros band recently took the stage to perform for a group of younger students at the school.

“What was planned to be a concert ended up becoming an impromptu sing-along,” he said, noting that the children in the audience were thrilled to jump in and sing. “I love that — having an entire school making music together as a community exactly the way that it should be done.”

Olivieri, who grew up in Palmdale, said he has always been around music. His parents were performers, he said, and the arts just became a part of who he was.

“They let me change records on the old record player when I was still in diapers,” he said of his mother and father. “Dad would get up in the middle of the night and play the piano. There was never a time that music wasn’t around.”

Olivieri and the many students who have performed under his direction at Cabrillo have enjoyed a great amount of success at the school. His bands have consistently placed well at various competitions and have set some school records for scores along the way.

He said those trophies and ribbons aren’t his motivation, however.

“Competitions are fun and winning is fun, but winning in competitions has nothing to do with why we do music,” he said. “If I had to pick a highlight, it’s just being able to go on this incredible journey with these students. Their sustained efforts to making art together as an ensemble is a joy and a privilege, and we get to do this every single day. I’m a lucky guy just to be a part of it.”

“Garson’s passion, energy, and enthusiasm for the performing arts shine through, and have inspired young students to develop an enduring appreciation for music and the arts,” Cirone said. “We applaud the Santa Barbara Bowl's vision in spotlighting the importance of the performing arts in a well-rounded education.”

As part of winning the award, Olivieri will receive tickets to a show of his choice at the Santa Barbara Bowl. He said that he and his fiancée haven’t yet decided on a show, but he is looking forward to the experience.

More than anything, he said he's grateful for the opportunities he’s been afforded thanks to all those students and adults with whom he’s worked.

“Everything we do is a team effort,” he said. “That, to me, is the important part. It’s going through this process of making music with people that matters most. And especially with these wonderful people that I get to do it with — from these incredible and hardworking students to their wonderful parents to a supportive administration to my very supportive soon-to-be wife, who understands what it takes to do this.

“The primary thing is just that I’m thankful for the recognition and honor,” he said, “but I’m eternally grateful to be a part of us.”

Cabrillo High marching band claims a pair of medals, including a gold, at championships in Downey

Although math and performing arts have been the staples of her teaching career thus far, Lompoc High School instructor Sarah Barthel may soon …

As he prepared for his fifth season as the director of the Cabrillo High School marching band this fall, Garson Olivieri acknowledged that he …

While the annual Flower Festival typically brings together people from just about every segment of the Lompoc community, this year’s event wil…

Garson Olivieri, shown during a rehearsal Friday with the Cabrillo High School Symphonic Winds orchestra, was selected as the Santa Barbara Bowl performing arts teacher of the year for the county.

Cabrillo High School's Marching Band performs in their new uniforms on May 12 at Disneyland.

Awards line the walls of the band room at Cabrillo High School.