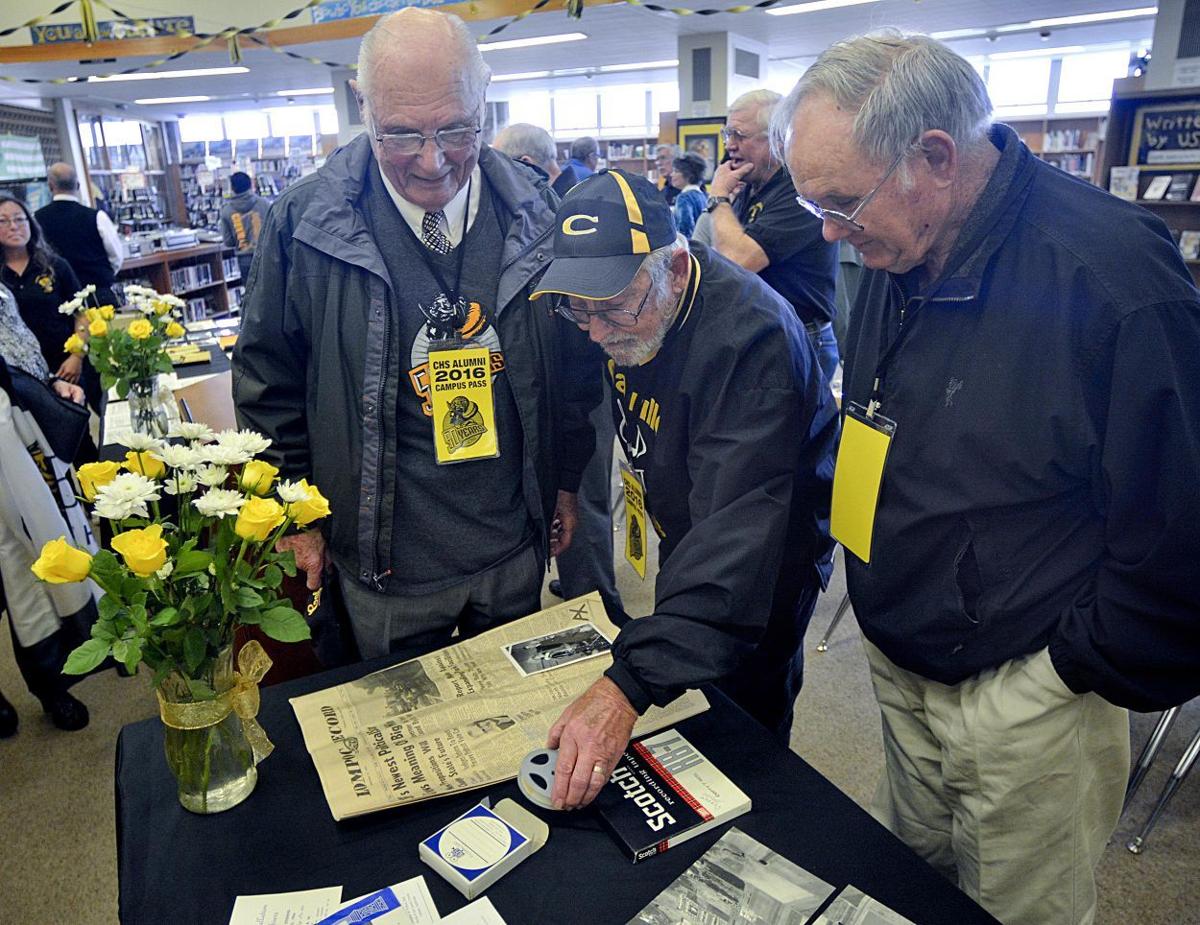 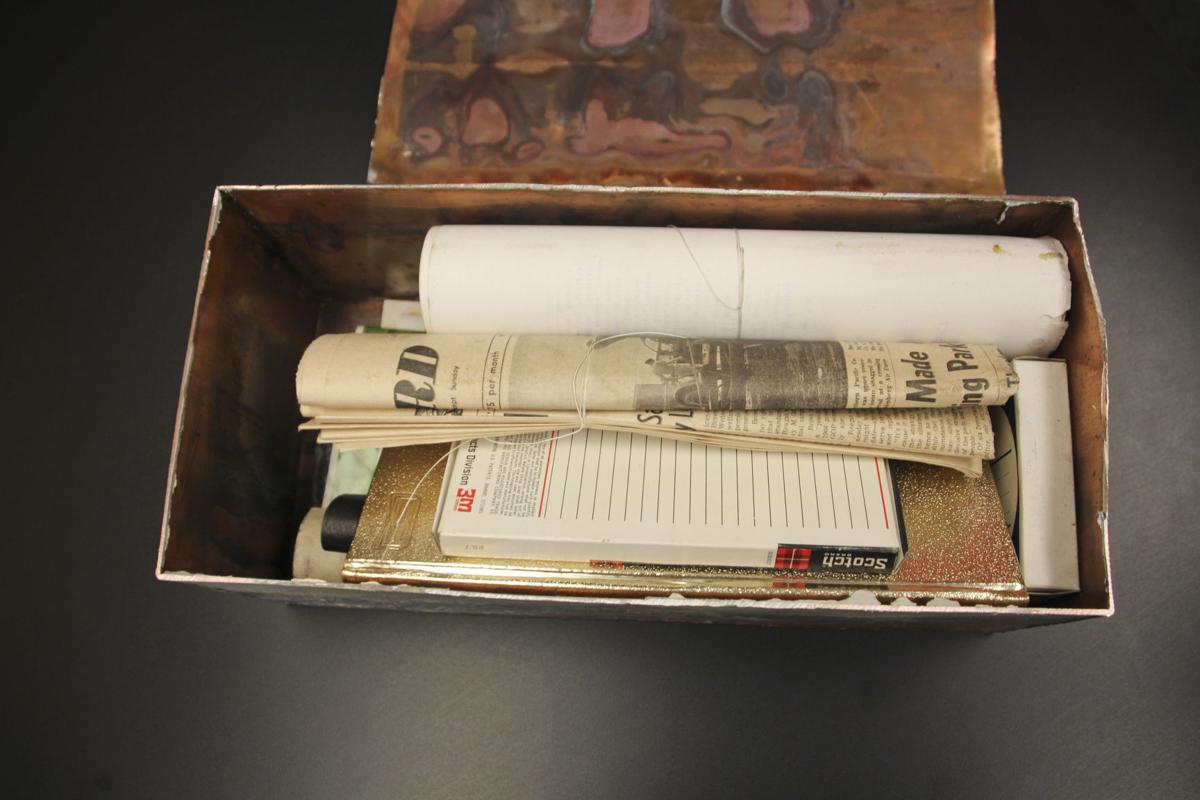 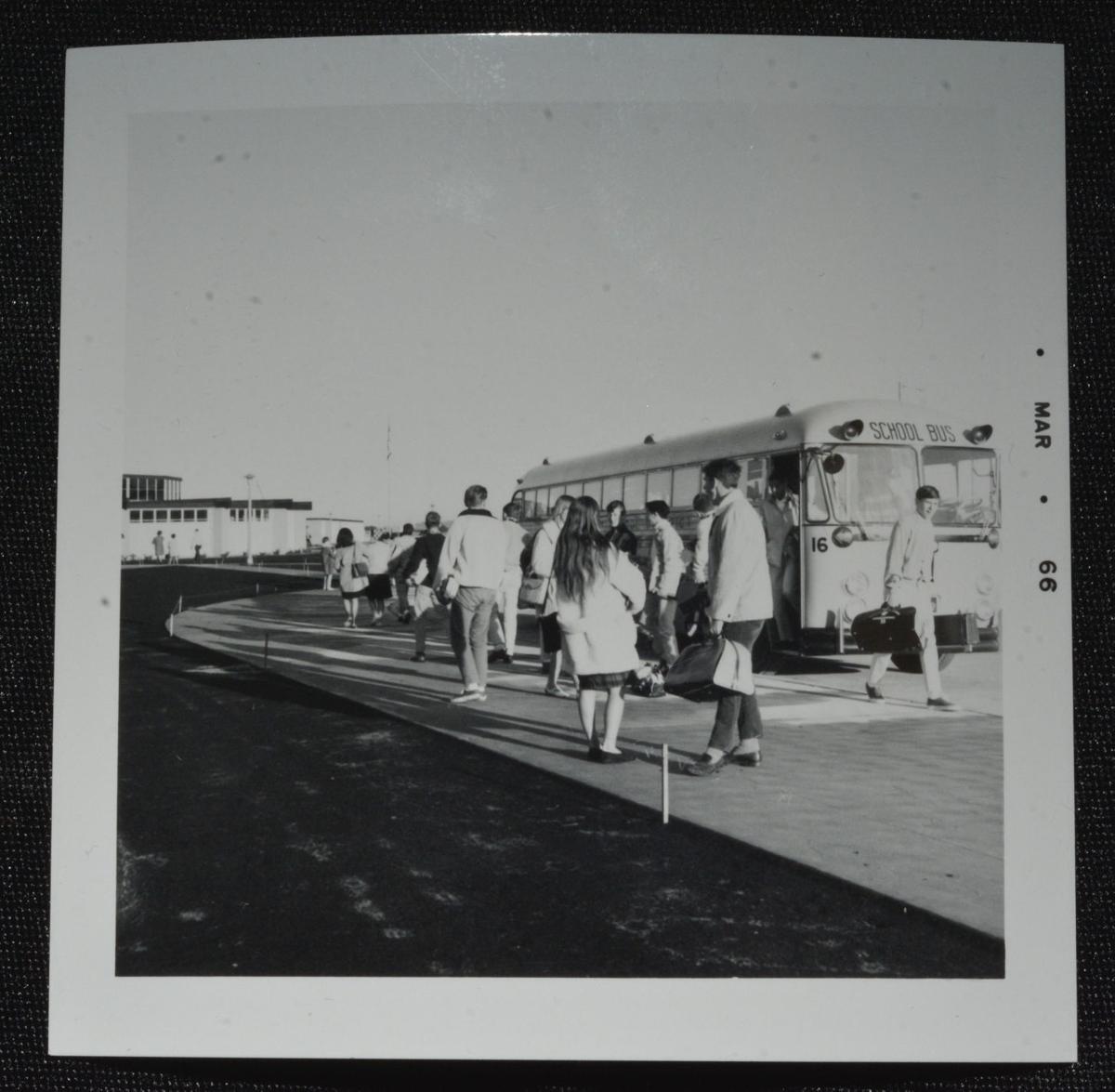 A photo found inside a time capsule that was opened for Cabrillo High School's 50th anniversary shows students arriving on the new campus in March 1966. 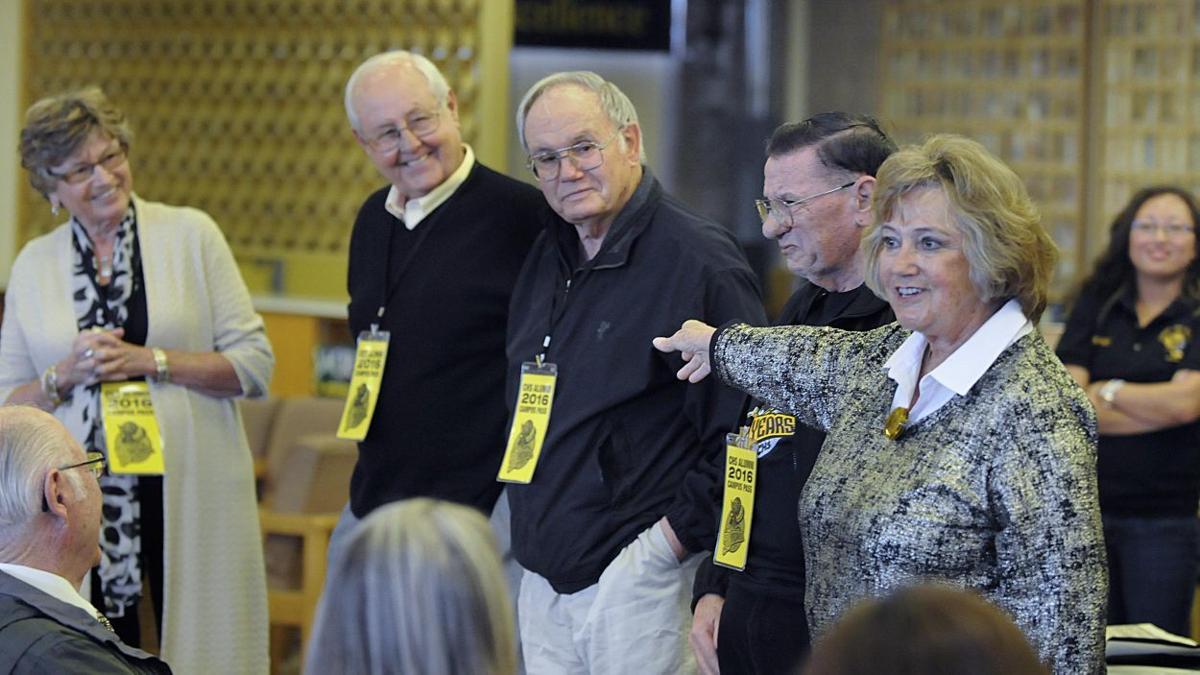 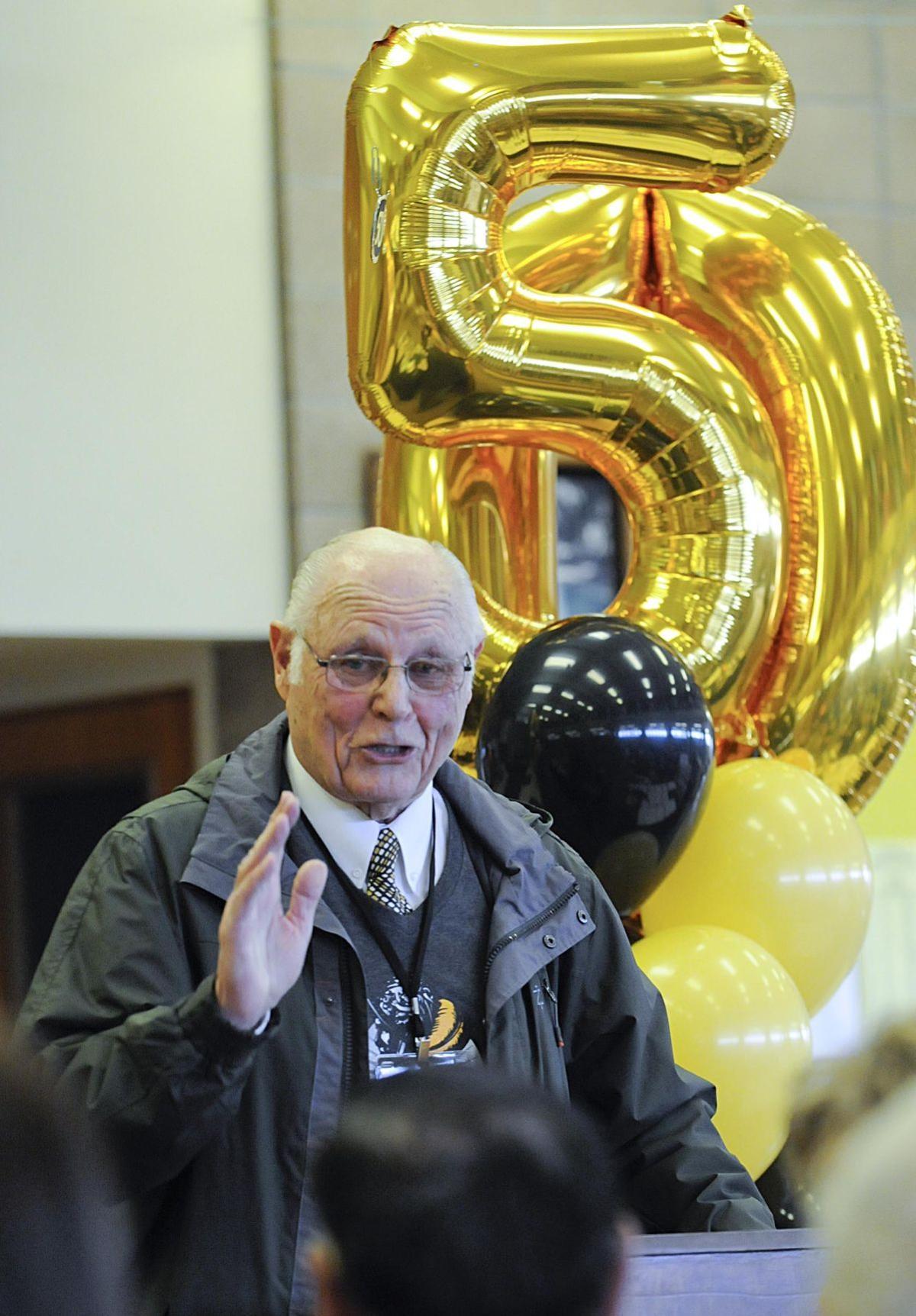 Mel Wilde, Cabrillo’s first principal, speaks during a ceremony marking the Cabrillo High School's 50th anniversary with the opening of a time capsule. 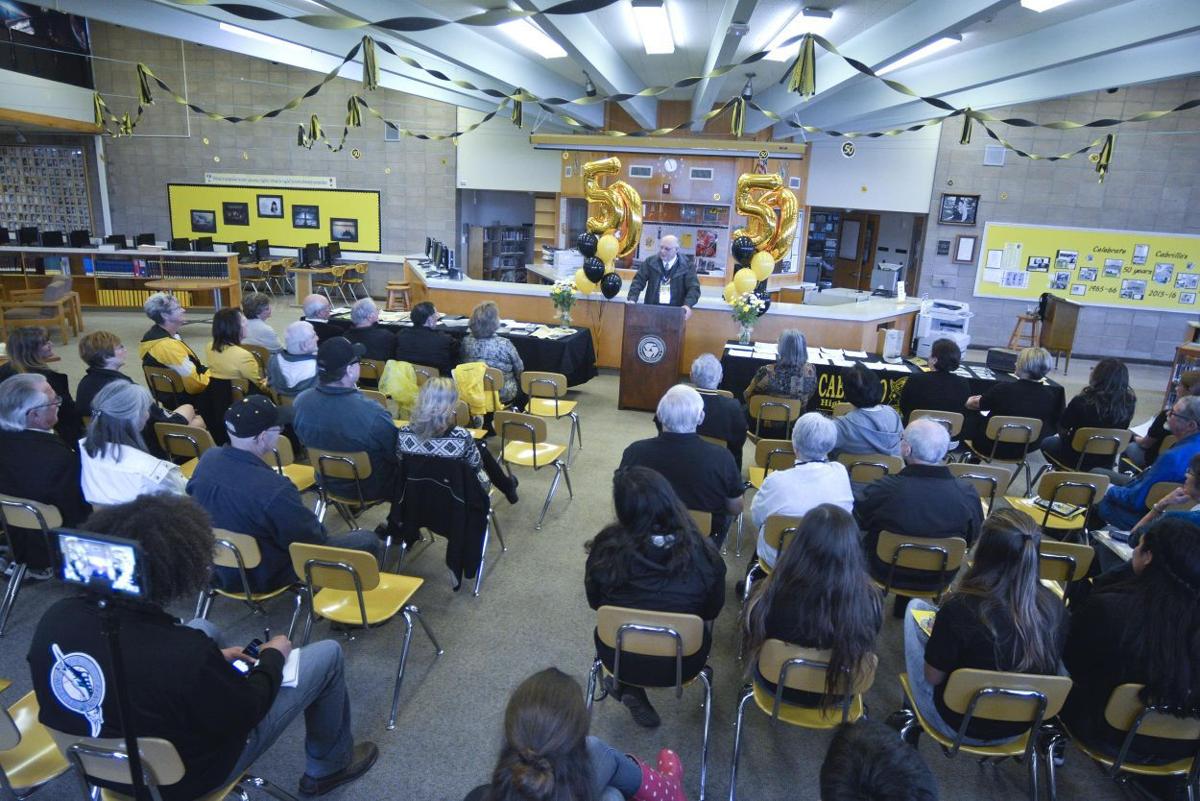 Mel Wilde, Cabrillo’s first principal, speaks to the audience in the library during a ceremony marking the Cabrillo High School's 50th anniversary with the opening of a time capsule.

Wagonseller made that declaration Monday morning during a ceremony that brought the school’s past together with its present exactly 50 years to the day after Cabrillo High offered its first classes March 7, 1966.

Monday’s ceremony, which was held in the school’s library and included about 60 guests, was highlighted by the unveiling of several artifacts that had been placed in a time capsule at the school during that first semester of classes.

The unearthed items included the school’s first yearbook, photographs, student essays and drawings, copies of the school newspaper and film reels that were created in that first year.

One of the guest speakers at the ceremony was Mel Wilde, Cabrillo’s first principal.

“Usually they open those when they tear a school down, so I was just thinking, ‘Oh God, are they gonna tear (Cabrillo) down?’” he said Monday with a laugh.

On the contrary, the capsule was opened as part of a yearlong commemoration that has mainly held up what many who have been a part of the school’s 50-year run see as a rich history and tradition.

“Mel, those seeds you planted 50 years ago are still growing, and they’re growing strong,” Wagonseller said.

Speaking to a crowd that included several administrators and faculty members from throughout the school’s history, four members of the Lompoc Unified School District Board of Education, a handful of LUSD administrators and about 20 current members from the Associated Student Body, Wilde detailed the origins of several aspects of Cabrillo’s history.

Among thosewas the name of the school itself.

Wilde was working as principal at Lompoc Valley Middle School when he said he first got the offer to helm the district’s new Vandenberg Village campus, known then only as “high school.”

One of the first suggestions was for the school to be named after Lawrence Huyck, a multisport standout athlete from Lompoc High School’s class of 1927 and a former LUSD board member.

“I had a problem with that,” Wilde said, drawing some laughter from the pro-Cabrillo crowd that didn't care much for mentions of its crosstown rival.

He said he took his concerns to the district superintendent, who he said came up with the solution to name the football stadium on the Lompoc High campus after Huyck instead of the new school.

The school was ultimately named after 16th century explorer Juan Rodríguez Cabrillo, in large part because a section of Highway 1 — the highway that runs near the campus — had been dubbed “Cabrillo Highway.”

Wilde also shared some of the backstory on the school’s nickname “Conquistadores," its stylized “C” logo and the mascot and crest that have since become synonymous with the campus.

One of the most contentious issues, he noted, was choosing the new school’s color scheme.

Wilde said he had relied on student votes to decide on many of the early issues surrounding the school’s presentation.

To break that tie, he had the cheerleaders — who were primarily responsible for decorating for events, and thus would be working with the colors a lot — investigate which color, between red and gold, would be easier to obtain in various materials.

“We talked about it, and guess what we came up with?” Wilde said as he stood in front of several large gold balloons.

Monday’s ceremony was the first of many activities that will be held at the school this week to honor the 50th milestone.

An assembly is scheduled for Friday, at which administrators plan to raise a 50th anniversary flag that was presented to the school by members of the inaugural faculty on Monday.

The flag had been slated to go up on the school’s flagpole Monday afternoon, but those plans were postponed due to heavy rain.

Pettit worked to track down where the copper capsule was placed — it was in a wall behind a plaque on the school’s administration building — and was among a small group of people to get the first look at its contents last week.

“It was really cool; really fun,” she said of getting an up-close look at the school’s history.

Pettit will document many of the things in the capsule, including watching the old film reels, and she will work with her current class to determine what to add to an updated capsule the school plans to bury for at least the next 50 years.

“This whole project is pretty exciting,” Pettit said. “I didn’t expect it to be this big, to be honest.”

Wilde, who deferred credit for building the school’s tradition to its staff and students, said Monday he was proud to be back on campus and have the opportunity to interact with today’s students.

“We’re able to talk to young people and let them know that traditions have to be carried on,” he said of the benefits of being back at the school. “If you (weaken) them and make Mickey Mouse out of your mascot or something, it doesn’t last. It has to stay the same.

“There’s always pressure to change,” he added, “but tradition isn’t based on change.”

Isidro Carrasco, a longtime educator currently working in the Sacramento area, has been tabbed as the next principal of Cabrillo High School.

Cabrillo's "Gold and Black" anniversary kicked off on March 7th, the 50th anniversary of the first classes at the school. Take a look through …

About $100,000 worth of renovations were recently completed at the Cabrillo High School gym, thanks to the efforts of the CHS Athletic Booster Club.

With debates taking place around the country regarding the appropriateness of school and professional sports teams’ names, at least one Lompoc…

A photo found inside a time capsule that was opened for Cabrillo High School's 50th anniversary shows students arriving on the new campus in March 1966.

Mel Wilde, Cabrillo’s first principal, speaks during a ceremony marking the Cabrillo High School's 50th anniversary with the opening of a time capsule.

Mel Wilde, Cabrillo’s first principal, speaks to the audience in the library during a ceremony marking the Cabrillo High School's 50th anniversary with the opening of a time capsule.