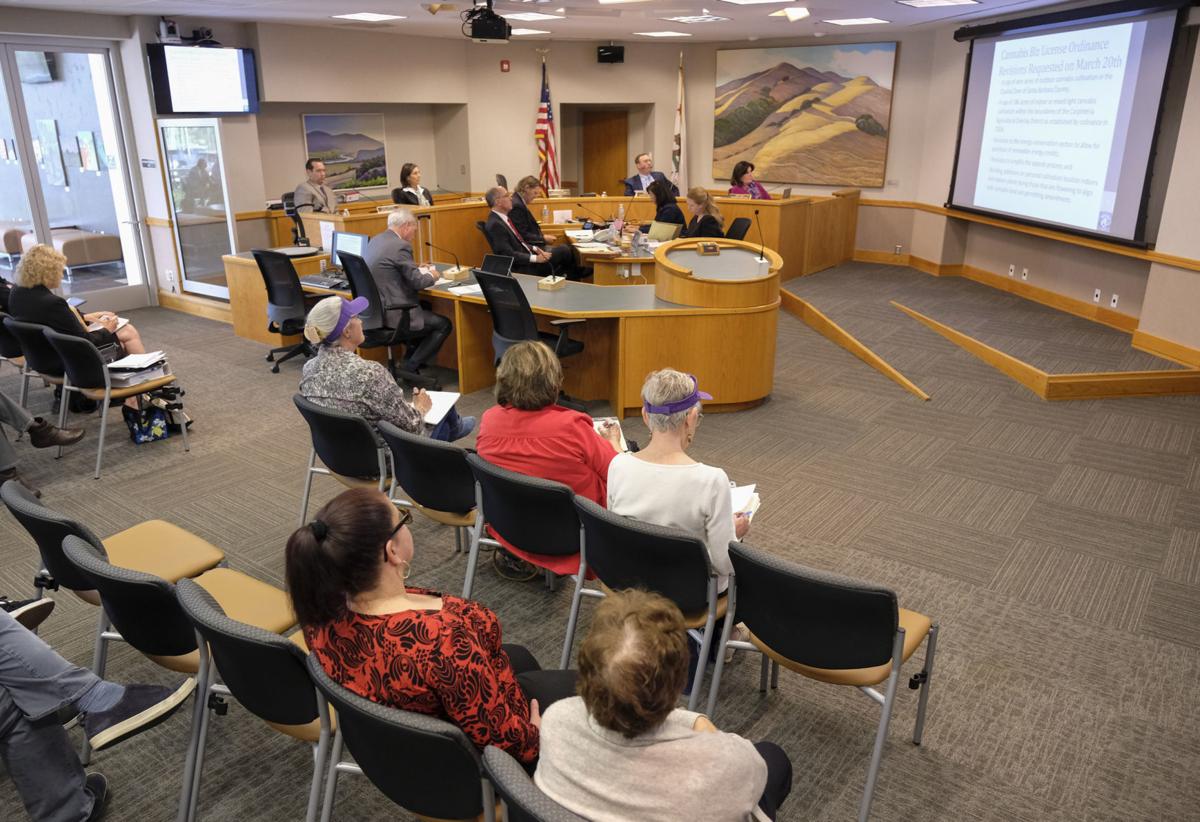 Santa Barbara County Board of Supervisors and audience members look at elements of an ordinance to establish cannabis business licenses during the board meeting Tuesday. Supervisors eventually approved the ordinance on a 3-2 vote. 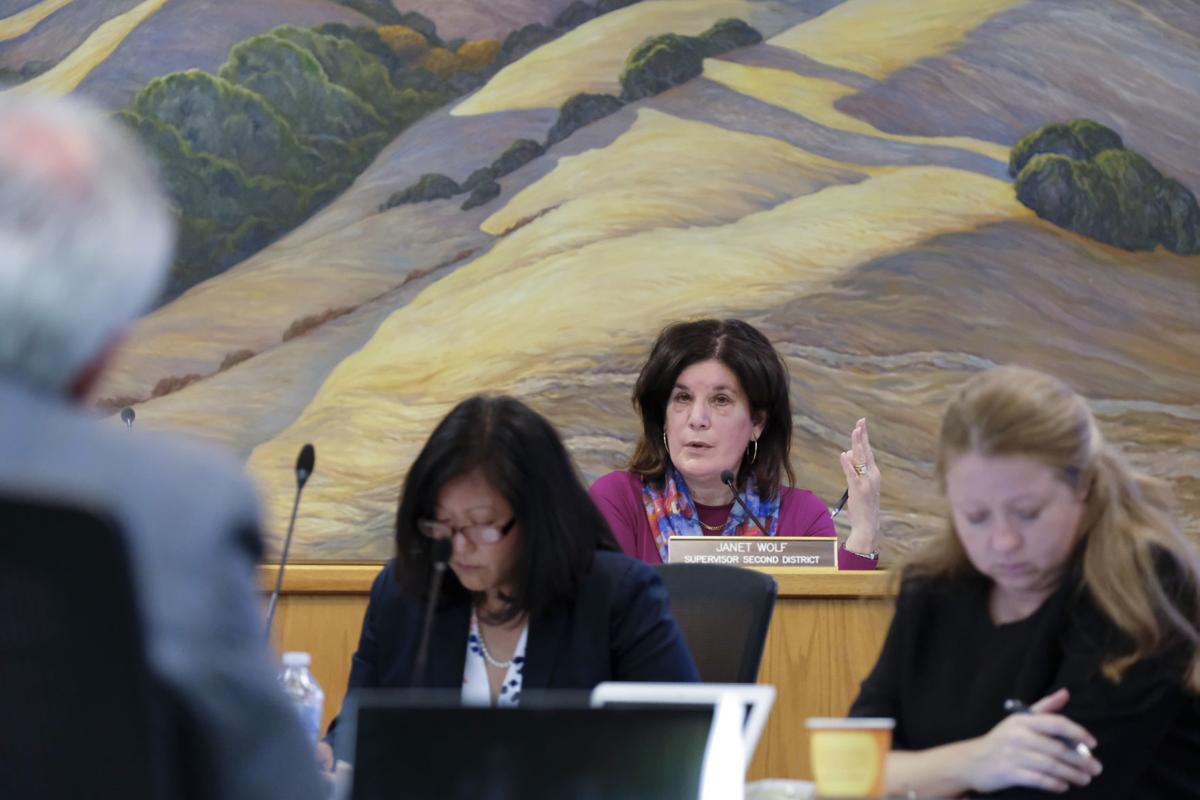 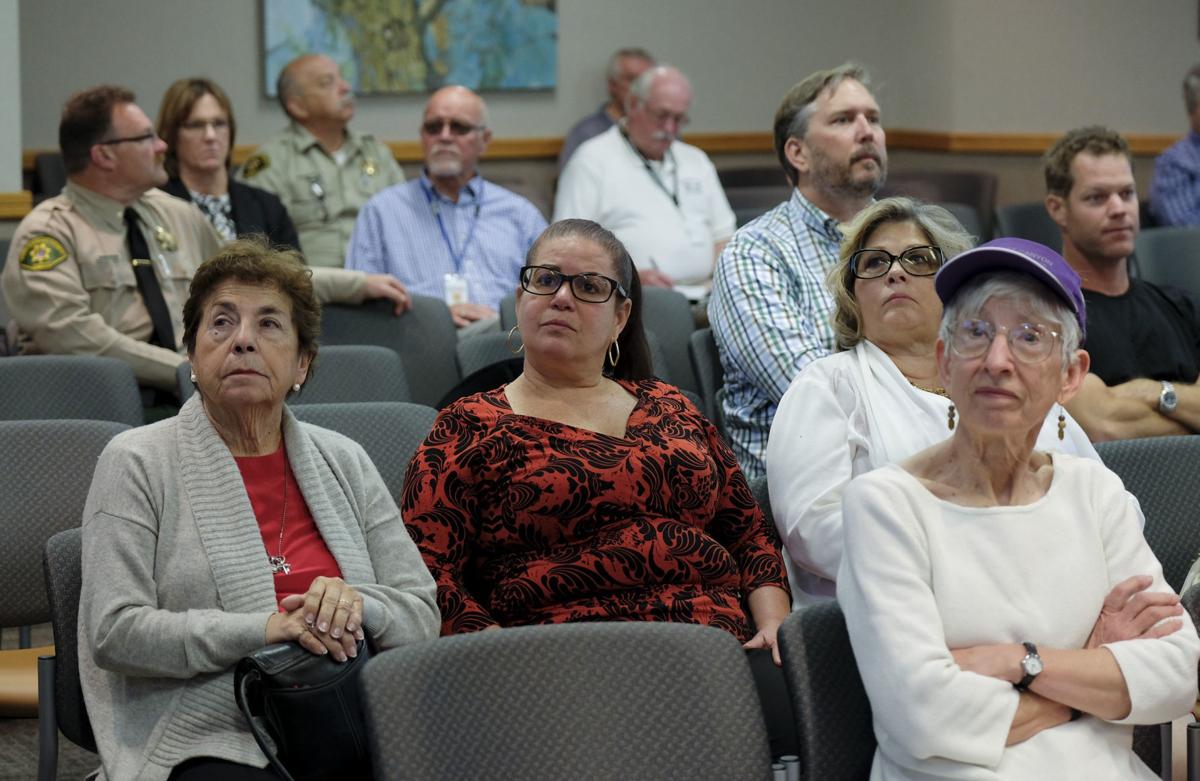 Members of the audience watch video monitors Tuesday in the Santa Barbara County Board of Supervisors hearing room in Santa Maria as the board reconsiders and ordinance establishing cannabis business licenses. 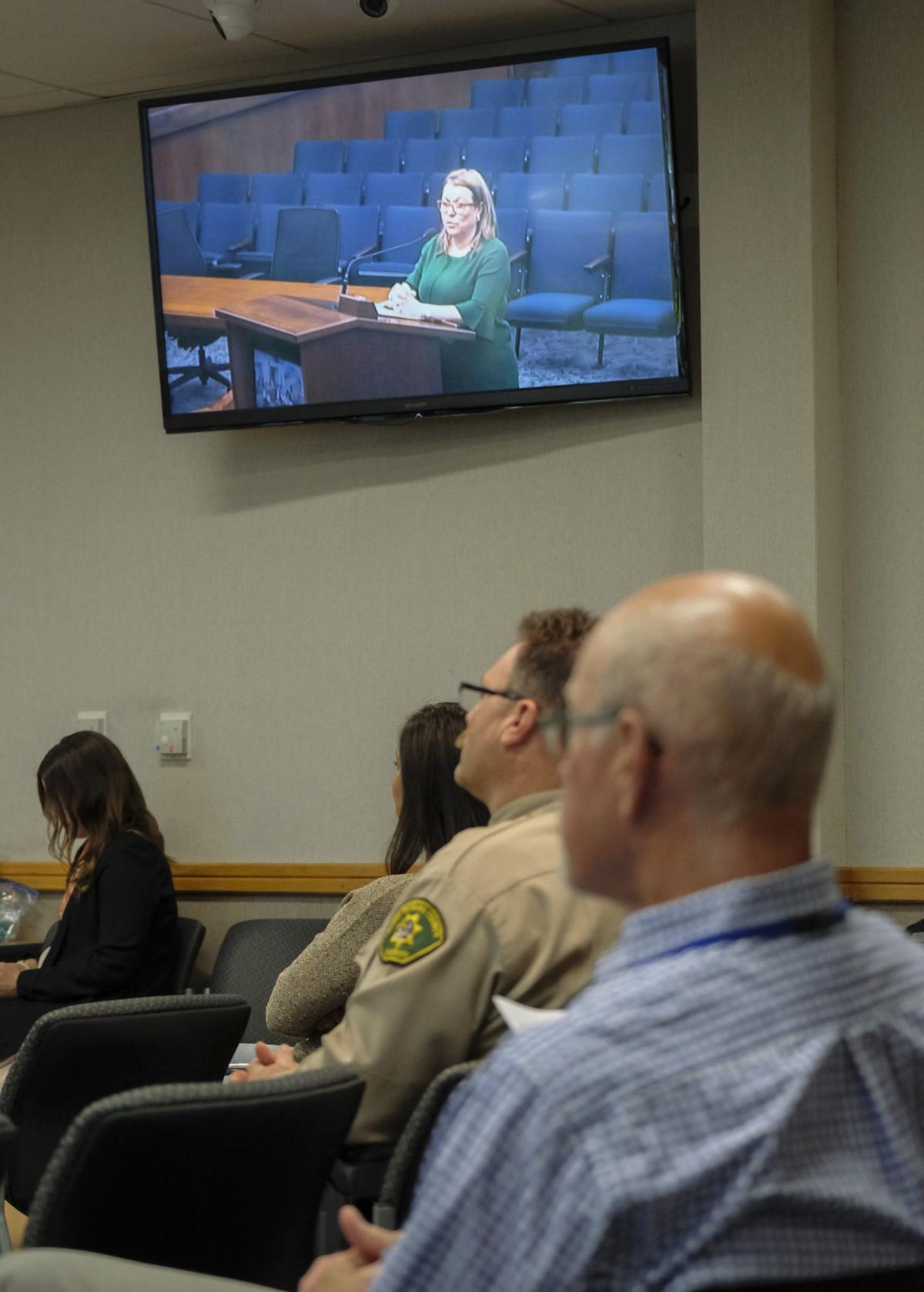 Jennifer Christensen, the county's chief investment officer, speaking via live-streamed video from Santa Barbara, gives the Santa Barbara County Board of Supervisors an update on the status of a cannabis bank account as supervisors discuss an ordinance to establish cannabis business licenses Tuesday in their Santa Maria hearing room. 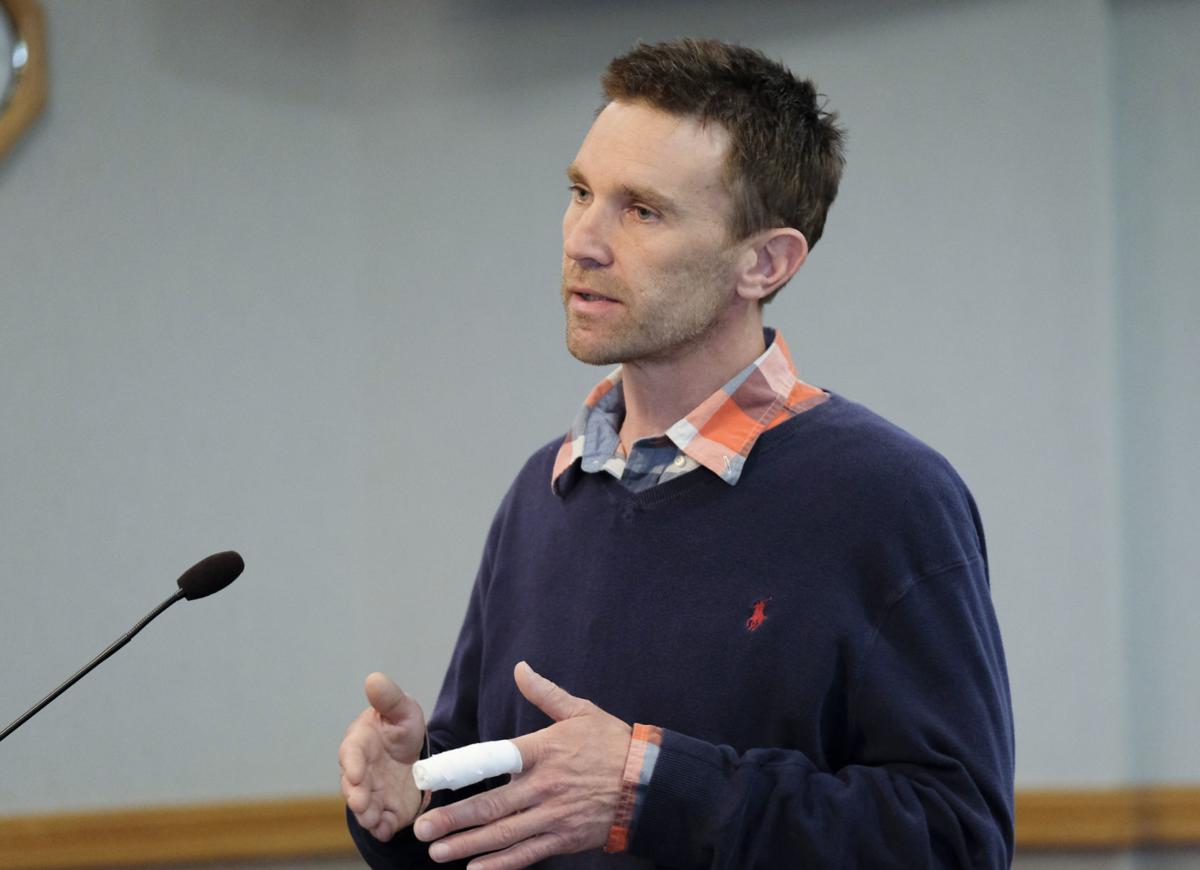 Josh Stinson of Cuyama talks to the Santa Barbara County Board of Supervisors about his concerns Tuesday during a discussion of a cannabis business license ordinance in Santa Maria.

A cannabis business license ordinance for Santa Barbara County was approved April 10 by the Board of Supervisors on a split vote that included designating a process for dealing with cannabis operations during a transition period.

It is scheduled to return to the board May 1 for final approval on the administrative agenda. The ordinance would become effective May 31, but it may not be operational on that date because that’s contingent on several other factors.

Adam said he voted against the ordinance because of what he sees as “overregulation” of the industry, while Wolf voted “no” because she believes it will result in an increase in licenses without generating revenue to cover associated costs.

“I’ve always thought this process is too complicated … and confusing,” Adam said, adding he believes it will encourage more black market operations. “But clearly the train has left the station on this. I reserve my option to say ‘I told you so’ when it doesn’t work out.”

Wolf seized on Adam’s railroad analogy in stating her objections, particularly to the option selected for handling cannabis operations during the period after temporary state licenses expire but before the county ordinances become operational and county officials start issuing licenses and land use permits.

“I think this is such a disservice to our community,” Wolf said. “I feel like we’re moving into a derailment. It’s almost reckless. There’s no money for enforcement.

“We have the most (state temporary) licenses in the state. I feel like it’s out of control. We should wait until everything is operational.”

But 1st District Supervisor and Chairman Das Williams said the goal of the business license provisions and transition period process is to make cannabis businesses operate in compliance with county regulations before they have to.

“From where I sit, everything was out of control before we started this process,” Lavagnino said. “Starting off from where we were … at least in my district, things weren’t working. That’s why we moved to this process.”

What the ordinance does

The ordinance requires anyone engaged in any recreational or medical cannabis operation obtain a county cannabis business license that must be renewed every year and is not transferable.

A license will be required for each entity conducting a cannabis operation on any given parcel, and a single operator must have a license for each type of operation being conducted at a site.

It bans outdoor cannabis cultivation in the Coastal Zone, caps cultivation at 186 acres of indoor or mixed-light cultivation within the Carpinteria Agricultural Overlay District and caps the number of retail operations at eight countywide, with a maximum of two in any supervisorial district.

The ordinance also sets forth clear roles and procedures for cannabis businesses and county departments and establishes a multidepartmental compliance team with personnel from the Planning & Development, Sheriff, Fire, Agricultural Commissioner and Public Health departments.

Compliance team members will assist the executive officer in approving or rejecting applications and renewals, but it will be up to the treasurer-tax collector to issue cannabis business licenses or notify an applicant a license was denied.

Revisions to the initially proposed ordinance requested by supervisors March 20 that were incorporated include allowing operators to purchase renewable energy credits to meet energy conservation requirements and simplifying the appeal process by sending it before a hearing officer rather than a full board hearing.

However, neither the business license ordinance nor the land-use permit ordinance can become operational until the county treasurer can open a bank account for depositing cannabis-derived revenues.

Jennifer Christensen, the county’s chief investment officer, said the Treasurer-Tax Collector’s Office has established an account with “a well-capitalized” financial institution the county has dealt with before, although a few details remain to be worked out.

“We still need to figure out how to get the money into the account,” Christensen said. “We’re working with a number of vendors. We believe we’ll have something in place by the end of June.”

In addition to potential delays caused by the banking issue, neither ordinance will be operational in the Coastal Zone until they are approved by the California Coastal Commission, which could take a year or more.

The first temporary medical cannabis cultivation licenses issued by the state will start expiring May 1, although they may be extended 90 days if the licensee has already submitted an application for a state annual license.

But one of the state’s requirements for obtaining an annual license is a letter from the county certifying a cannabis operator is in compliance with county ordinances, which won’t be operational.

The solution chosen by the board majority will open up a consultation process to all cannabis operators countywide, rather than just legal nonconforming medical operations in the Coastal Zone.

If in the consultation process the county determines the operator will be in compliance with county ordinances once they become effective, the county will “remain silent” by not sending a letter.

After the 60-day verification period with no comment from the county, the state will assume an applicant is compliant with county ordinances.

County officials would only send a letter — stating noncompliance — to the state if the consultation process shows an operation is not or will not be compliant once ordinances become operational.

The teenager killed in Friday night's shooting was identified as 16-year-old Pablo Sixto, who was shot shortly before 9 p.m. in the 700 block of North E Street in Lompoc, according to police.

A former flute teacher who taught programs across Southern California, including in the Santa Ynez Valley, pleaded guilty Thursday to a federal child pornography-related charge, according to a U.S. Attorney spokesman.

One person was injured in a shooting near LaSalle and Columbus drives Saturday night, according to a Santa Maria Police spokesman.

A man suspected of stealing a vehicle was arrested in Orcutt on Tuesday after the owner was able to locate the vehicle using a smartphone app, according to a California Highway Patrol spokesman.

For the first time in department history, Santa Maria Police used a drone, or unmanned aerial vehicle, to seek out a suspect hiding in the riverbed over the weekend.

A Santa Barbara County Jail inmate who tested positive for COVID-19 in July, but recovered, was found dead inside his cell on Tuesday, according to a spokeswoman.

Santa Barbara County Board of Supervisors and audience members look at elements of an ordinance to establish cannabis business licenses during the board meeting Tuesday. Supervisors eventually approved the ordinance on a 3-2 vote.

Members of the audience watch video monitors Tuesday in the Santa Barbara County Board of Supervisors hearing room in Santa Maria as the board reconsiders and ordinance establishing cannabis business licenses.

Jennifer Christensen, the county's chief investment officer, speaking via live-streamed video from Santa Barbara, gives the Santa Barbara County Board of Supervisors an update on the status of a cannabis bank account as supervisors discuss an ordinance to establish cannabis business licenses Tuesday in their Santa Maria hearing room.

Josh Stinson of Cuyama talks to the Santa Barbara County Board of Supervisors about his concerns Tuesday during a discussion of a cannabis business license ordinance in Santa Maria.