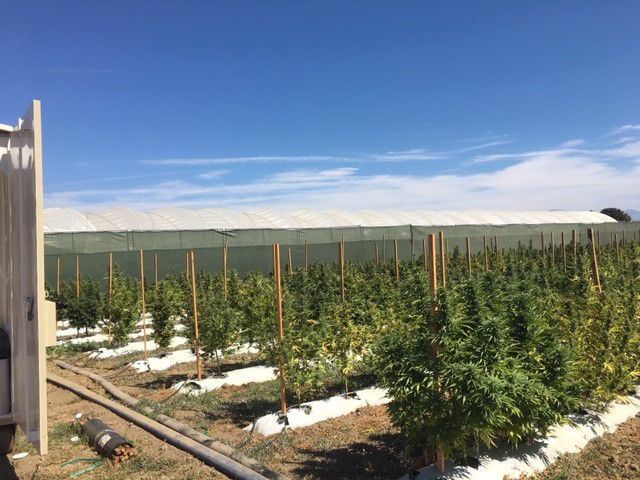 More than 8,500 cannabis plants valued at more than $4.3 million illegally grown on two sites in northern Santa Barbara County were destroyed in September by members of the Sheriff's Cannabis Enforcement Team, a sheriff’s spokeswoman said. 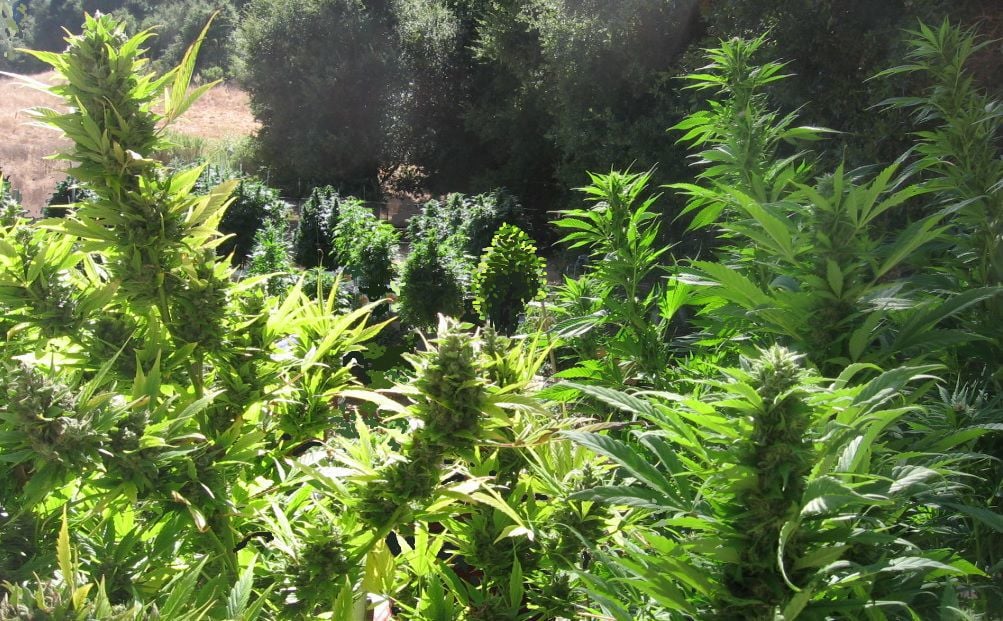 Cannabis is growing in a canyon near Santa Ynez Valley, where residents are concerned the ordinances passed by Santa Barbara County supervisors is threatening revenues and their way of life. 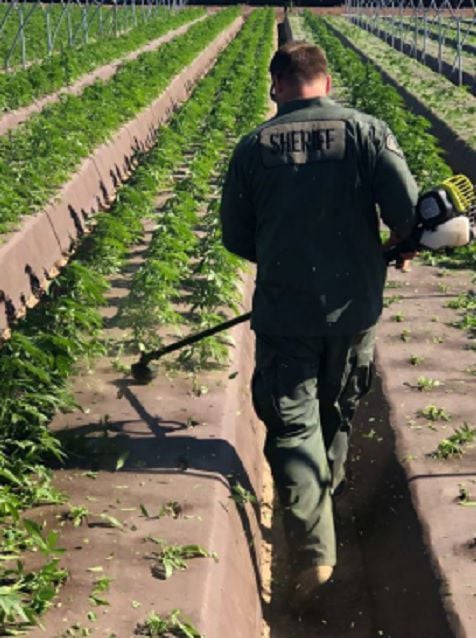 A member of the Santa Barbara County Sheriff’s Cannabis Enforcement Team uses a line trimmer to mow down some of the 400,000 illegally grown cannabis plants found on a large growing operation two weeks ago.

The arrival of 2019 brought changes in the California cannabis licensing process, the potential for Santa Barbara County cannabis ordinance amendments, continued efforts to oust illegal operations and vague talk about hemp as a local crop.

For the county’s cannabis growers with temporary permits, time is growing short to apply for a county land use permit, the first step on the path to an annual state license.

“My recommendation is, if they haven’t already made an application for a land use permit, they should do so immediately,” said Dennis Bozanich, deputy county executive officer, who’s had his finger on the pulse of cannabis regulations for the past couple of years.

Temporary permits that have been issued and extended will expire March 31. Cannabis growers operating without a state license after that will be doing so illegally.

Currently, the county has 76 growers with active temporary cultivation licenses — each growing 15 to 20 varieties — operating on 50 to 60 parcels totaling 150 to 200 acres.

“If you think about it in relation to what it was, that’s roughly half the number of licenses we had (at the peak) last year,” Bozanich said.

He said nursery operators are wise to also hold cultivation licenses because state regulations are now more specific about what constitutes a nursery plant.

“By definition, a nursery plant is a nonflowering plant,” he said. “But now it’s also based on the plant’s height.”

At this point, only nursery and cultivation operations are underway in the unincorporated areas of the county, Bozanich said.

No one has applied for manufacturing, distribution, testing, delivery or retail permits in the unincorporated areas, primarily due to the limited amount of parcels with commercial or manufacturing zoning.

So until such operations open in the county’s cities, cannabis grown here must be sent elsewhere for testing, manufacturing and retail sales.

To be eligible for an annual license from the state, cannabis operators must obtain a county land use permit and a county business license and comply with provisions of the California Environmental Quality Act.

So far, only four of the county’s cannabis growers have obtained land use permits, and although they’ve applied for business licenses, none of the four has been granted one yet, Bozanich said.

But the state now has a provisional license that was created to accommodate jurisdictions that have allowed permits and temporary licenses but haven’t yet devised a way for operators to comply with the CEQA component.

“A lot of jurisdictions — including our county — only recently completed preparing a CEQA pathway,” Bozanich said. “If everything else is in order except the CEQA piece, they can obtain a provisional permit.”

Santa Barbara County crafted its ordinances so that if a grower can obtain a land use permit and a business license, the CEQA requirement has been met.

“A number of operators here theoretically can qualify for provisional licenses,” Bozanich said.

Operators have to apply for an annual state license and pay the license fee to obtain a provisional license, which will be good for 365 days from the date it is issued.

Before it expires, cannabis growers who qualify will have to pay the application fee again to obtain an annual license.

Bozanich said that’s why it’s important for growers to apply for land use permits now so they can meet all the requirements in the allotted time period.

Regardless of what permits or licenses they may possess, current cannabis operators owe the county taxes on their gross income for the quarter that ended Dec. 31.

Wednesday was the first day operators could pay those taxes, which are due by Jan. 31.

The first round of tax payments for the quarter that ended Aug. 31 brought nearly $2 million into county coffers.

But county officials expect the revenue from last quarter to be even higher, because the harvest was really just getting underway when the first round of taxes were calculated.

Cannabis that was harvested at the end of summer has now hit the market, so growers should show higher gross receipts.

However, the price of cannabis has been on a downward trend from its high of $3,000 a pound more than two years ago. Currently it’s averaging $1,000 a pound, with some selling for as little as $400 a pound.

If prices continue to fall, so will the county’s tax revenues.

“We plan to come back Feb. 26 with a quarterly (tax) update for the board,” Bozanich said.

Some smart marketing could prop up prices locally — if cannabis operations take advantage of one option already available and if growers can reach consensus to develop another.

“There are two things the state is working toward,” Bozanich said. “One is an effort to create appellations like they have for wines. The other is ‘county of origin’ labeling, which is available now. They’re similar but different.”

Cannabis operators could capitalize on the Santa Barbara County mystique simply by adding a line like “Product of Santa Barbara County” to their labels — provided the product was germinated, grown, harvested and processed in the county, regardless of whether it came from an outdoor or greenhouse grow.

“They want to keep appellation limited basically to outdoors — grown in the soil,” Bozanich said.

Cannabis connoisseurs say the native soil as well as climate affects the taste and potency of cannabis just as it affects the flavor of wine.

“There are questions about hoop (houses) and organically grown,” he added.

Vague and generalized locales have been informally used as cannabis appellations ever since Acapulco Gold hit the black market more than 50 years ago, followed by Panama Red and Maui Wowie.

But with legalization have come arguments among growers over where boundaries should be drawn for particular appellations, which could mean creating a system will be a long, arduous process.

No major enforcement operations against illegal cannabis plantations in Santa Barbara County have been reported since investigators seized 400,000 plants the last week of October, although it’s possible raids have taken place and not yet been made public.

Bozanich said he didn’t want to “jump ahead” of anyone in announcing any enforcement actions.

But he said the members of the Santa Barbara County Sheriff's Cannabis Enforcement Team continue to meet every other week to discuss complaints, investigative reports and tactics.

“We’re continuing to monitor several people, several operators operating outside their licenses,” he said. “We’re following up on complaints and enforcements. … I’m really proud of the enforcement actions we’re taking.”

As of Oct. 31, the team had conducted 10 enforcement actions against unlicensed and illegally operating licensed cannabis growers, arrested one person for perjury on a license application and destroyed more than 417,700 plants with an estimated value of $88.9 million on the illegal market.

Many of the complaints the county receives involve odor, which county ordinances require greenhouse growers control with a variety of devices.

“They could breed out the odor,” Bozanich said of those who specialize in creating hybrid strains of cannabis. “But the market wouldn’t accept it because people associate taste and potency with the smell.”

Meanwhile, county staff is working on potential amendments to the cannabis ordinances and expects to deliver them to the Board of Supervisors within the next month or two.

In early December, supervisors asked the staff to research potential revisions to solve unintended consequences that cropped up after the cannabis land use and business license ordinances were approved.

An issue that was subsequently added to those surfaced later when Solvang residents complained about a land use permit application close to their neighborhood on Fredensborg Canyon Road.

“An application was filed for a land use permit on a nursery and cultivation in a greenhouse at the end of the road with residential properties,” Bozanich explained. “The location is in the county jurisdiction but it immediately borders on city property.”

Residents said it’s not fair for them to be subjected to such problems as odor and traffic from a project the city has no control over.

Bozanich said the staff expects to bring proposed amendments before the supervisors no later than the Feb. 26 meeting and possibly sooner.

In December, Congress approved the Farm Bill that contained a provision that removed hemp from the list of federally controlled substances.

The plant, which is low in tetrahydrocannabinol — the compound that gives users a “high” and is usually referred to as THC — is now treated like any other agricultural product.

Removing the federal restriction could lead to growth of the hemp industry because of an increasing demand for cannabidiol, or CBD, a nonpsychoactive compound extracted from hemp for medical marijuana products.

A Santa Paula woman was identified as the woman who drowned near Bradbury Dam in Cachuma Lake on Sunday, according to a Santa Barbara County Sheriff's spokeswoman.

More than 8,500 cannabis plants valued at more than $4.3 million illegally grown on two sites in northern Santa Barbara County were destroyed in September by members of the Sheriff's Cannabis Enforcement Team, a sheriff’s spokeswoman said.

Cannabis is growing in a canyon near Santa Ynez Valley, where residents are concerned the ordinances passed by Santa Barbara County supervisors is threatening revenues and their way of life.

A member of the Santa Barbara County Sheriff’s Cannabis Enforcement Team uses a line trimmer to mow down some of the 400,000 illegally grown cannabis plants found on a large growing operation two weeks ago.