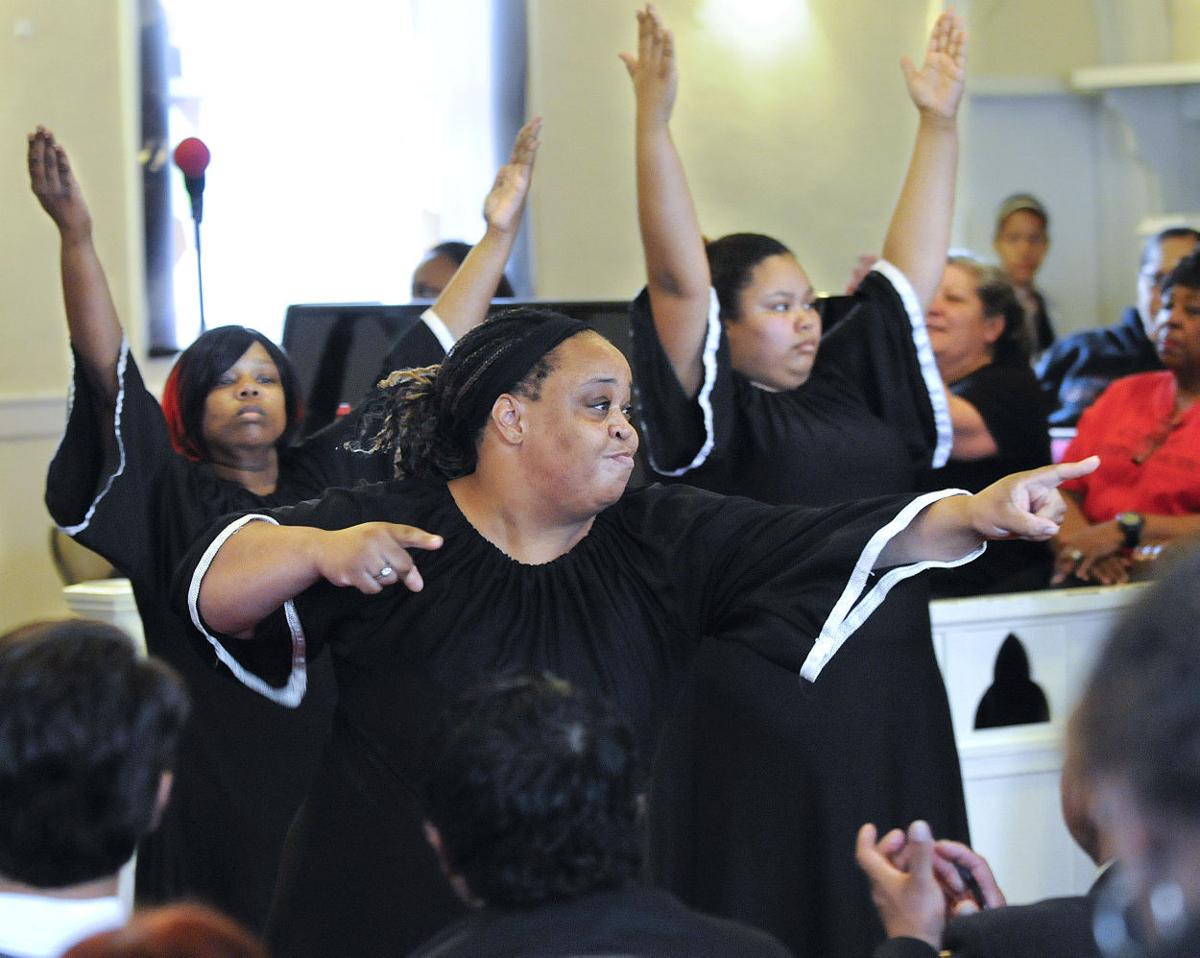 Praise dancers with the Grace Temple Missionary Baptist Church perform during a celebration of the legacy of Martin Luther King Jr. on Monday. 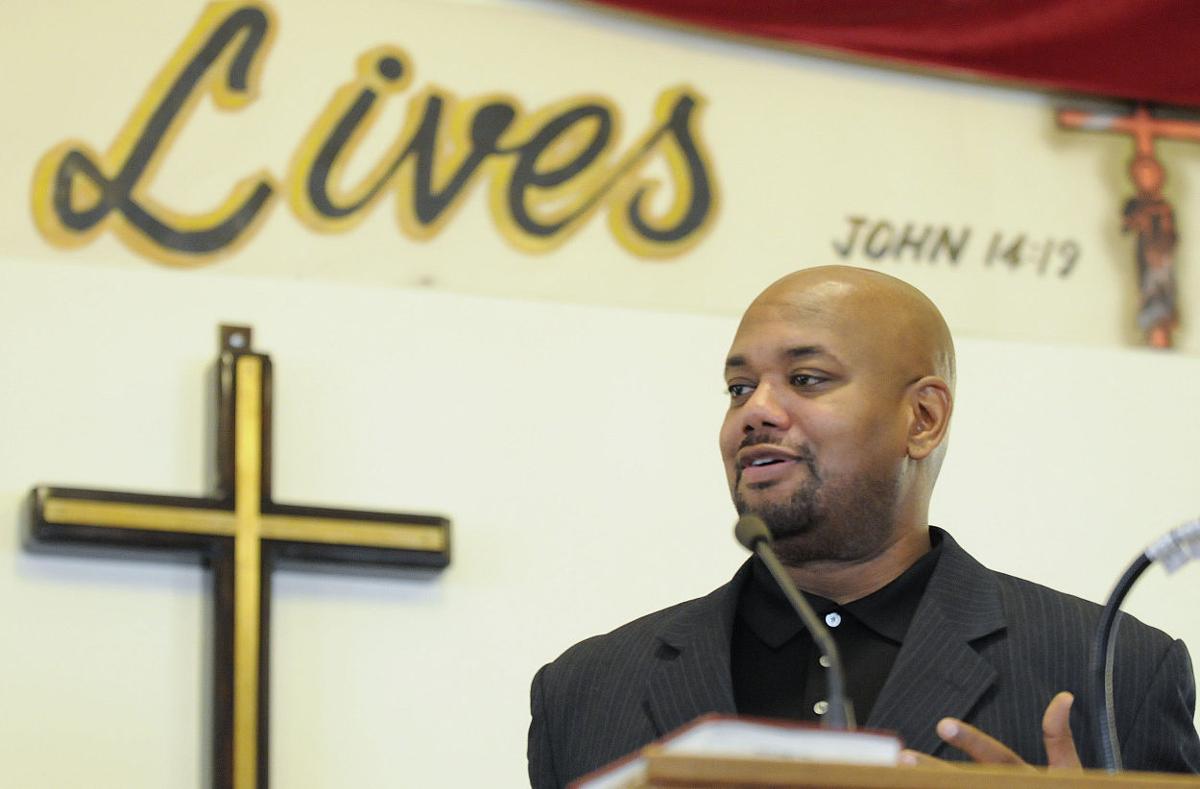 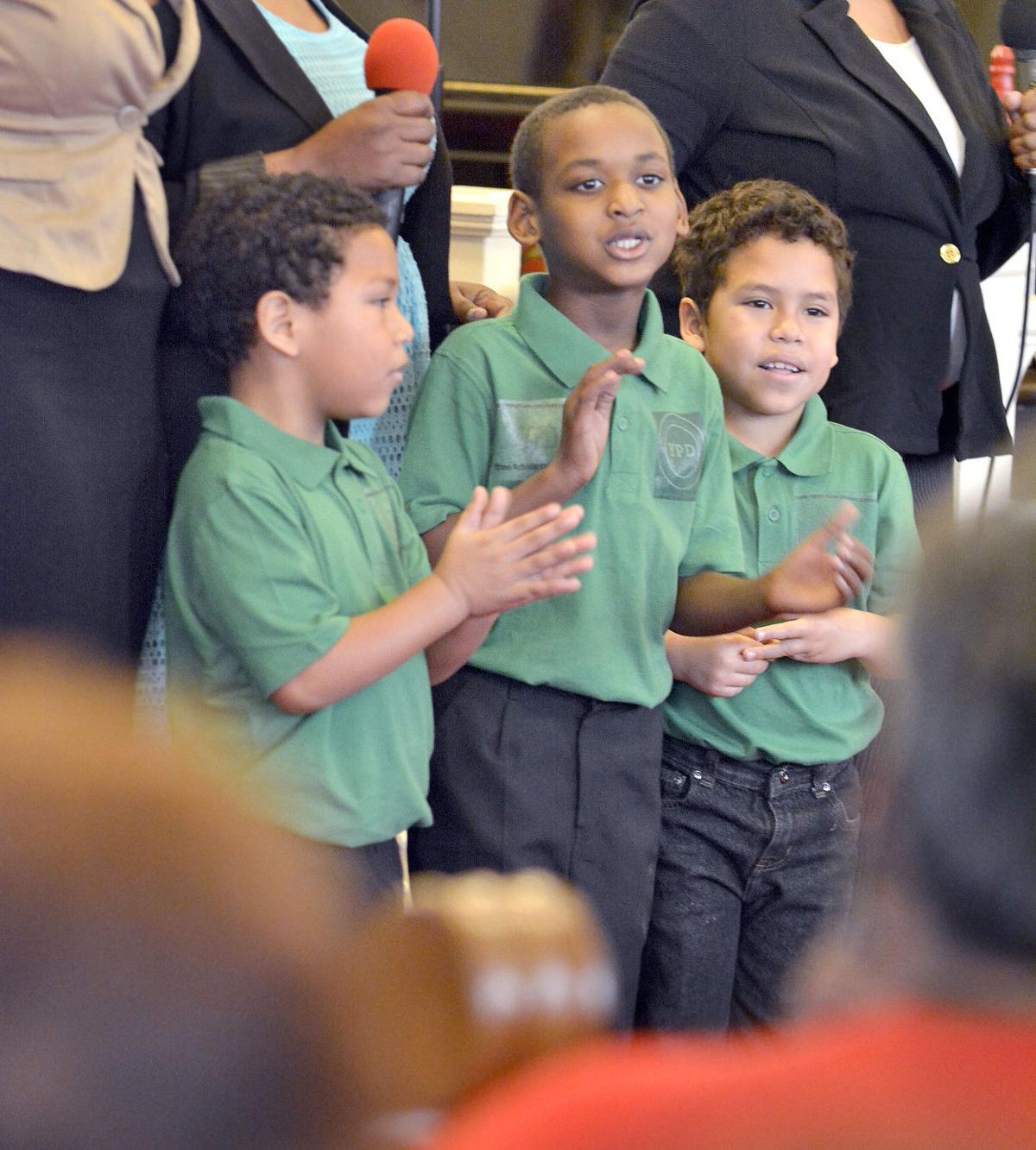 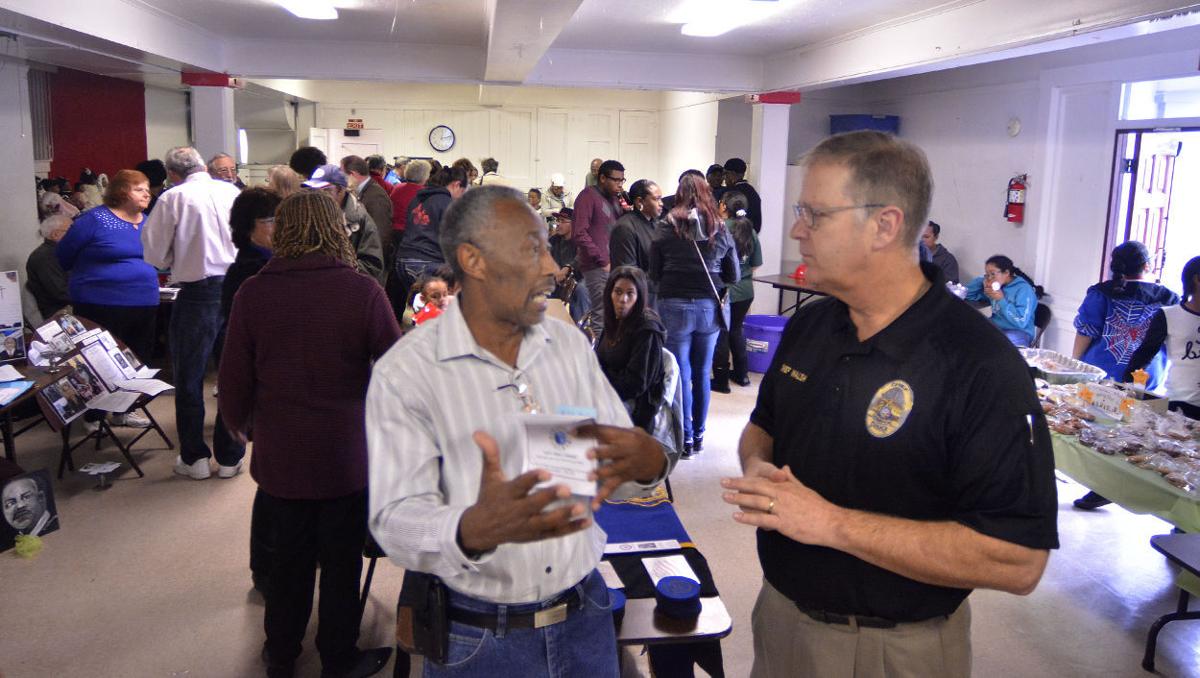 Pastor Ron Wiley talks with Lompoc Chief of Police Pat Walsh during a break in the celebration of the legacy of Martin Luther King Jr. at the Grace Temple Missionary Baptist Church in Lompoc. 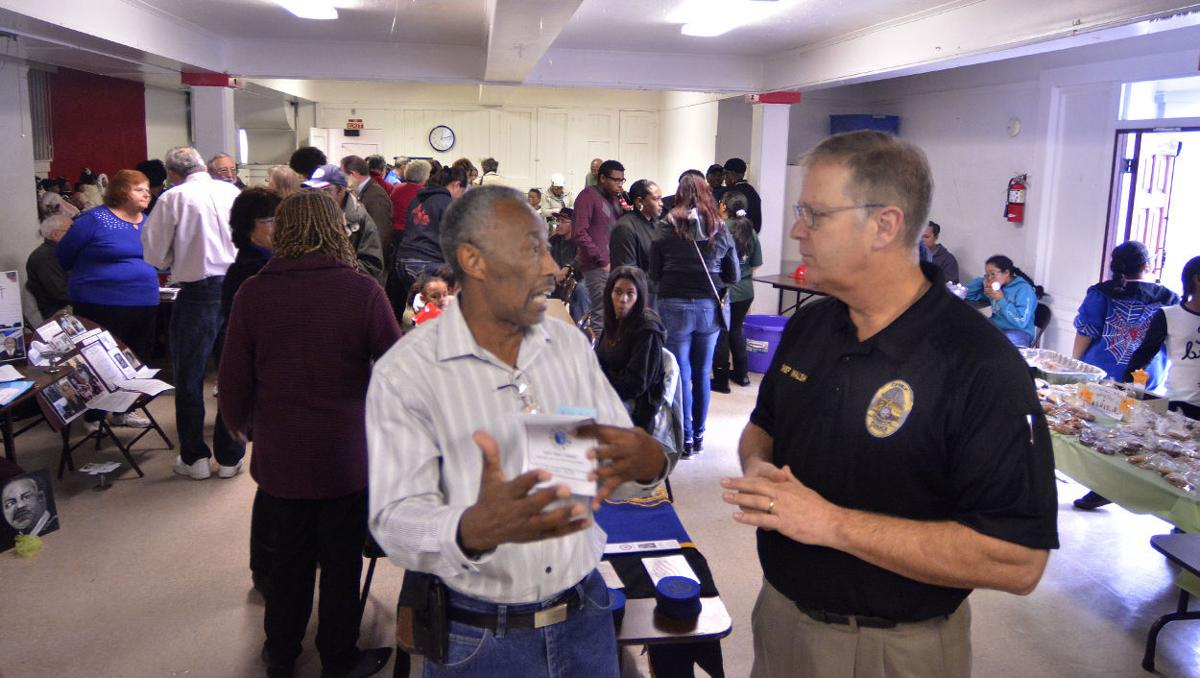 In this Jan. 19, 2016, file photo, Lompoc Police Chief Pat Walsh, right, talks to an attendee during a break in the celebration of the legacy of Martin Luther King Jr. at Grace Temple Missionary Baptist Church in Lompoc.

Although Martin Luther King Jr. is most famously remembered for having a dream, longtime educator Charles Osiris stressed early Monday afternoon that just as important — or perhaps even more — was what came after.

“He had a dream, but he didn’t get stuck on the dream,” Osiris said of the late civil rights activist. “He woke up and took action. That’s what we have to do. We have to wake up and begin to take more action.”

That sentiment was touched on by several speakers during a special Martin Luther King Jr. celebration at Lompoc’s Grace Temple Missionary Baptist Church on Monday, which was a national holiday in honor of King’s Jan. 15 birthday.

An estimated 200 people, representing many backgrounds and ranging from young children to the elderly, attended the ceremony. The roughly three-hour event featured speakers and song and dance performances in the church’s main hall, while vendors and representatives from several community agencies set up booths in the church’s basement, where they were moved due to Monday morning's rain.

Grace Temple Pastor Ronald Wiley, who sponsored the ceremony along with Pastor Bill Johnson, of Santa Maria’s St. Phillip African Methodist Episcopal Church, said that he was pleased with the high turnout for the event despite the morning showers.

This was the first year the church has hosted an MLK Day event. A similar ceremony had been put on for more than 40 years by Lompoc’s Club Arcturus, but that club folded early last year and Lompoc was left with no public MLK Day celebration in 2015.

“That was my heartfelt desire, to have this celebration,” Wiley said Monday. “It didn’t have to be of a large magnitude or be in a large arena or even have a large turnout, as long as we did something in remembrance of Dr. Martin Luther King. So, I’m excited.”

One of the common threads among the speakers at the ceremony was how King would feel about the progress that has been made in America in the nearly five decades since his death.

“If Dr. King were still alive today, would he be happy with where we are today?” Lompoc Mayor Bob Lingl asked. “We’ve come a long way, but we certainly have not seen the dream. We all say that all men are created equal and we should all be treated the same, but still there are injustices in this world and in this nation.”

Lingl went on to cite some of those injustices, including “too many young men dying on the streets,” the over-incarceration of young people, the growing number of unwed single mothers and the level of poverty in this country, “which we should not have.”

“Dr. Martin Luther King’s dream has not been fulfilled yet,” he said. “It’s up to us now to raise it and bring it back.”

“By (King’s) actions, he helped change our country and our world,” Howerton said. “Today there still exists discrimination, social and economic injustice, (and) hatred and suspicion of people that are different than us. But that rainbow of differences is what makes our country so great and so strong and it should be celebrated.”

“Dr. Martin Luther King touched many lives in his lifetime and now, long after his death, as we celebrate his birthday, he continues to touch lives,” she added. “We’ve come a long way, but there is still work to be done.”

Osiris, a Chicago native who has held several positions in higher education, said he tries his best not to deify King, so that people will keep in mind that King was a man like anyone else. What separated King from most, Osiris said, was his strong will and hope.

Osiris pointed out that King continued to fight for his beliefs in the last two years of his life during a time in which most of America, including an estimated half of the African-American population, didn’t particularly like him or believe in what he was doing.

“He had a moral compass that compelled him to action and to seeking truth — not just for black folks, but for all people,” Osiris said.

Osiris then turned his attention to some of the ills of today's society, such as the widening economic gap between the poor and the wealthy, the struggles of inner-city education programs and the increasingly publicized cases of police brutality.

With all that in mind, he said he doesn’t believe King would be optimistic about America’s future in 2016.

“And I don’t think he’d be wrong to not be optimistic,” Osiris said. “You’re a dreamer if you’re optimistic today."

A year after reviving an annual Martin Luther King Jr. Day celebration in the city of Lompoc, a group of local residents is expecting this yea…

The committee planning the 2019 Martin Luther King Jr. Day Celebration in Lompoc is continuing its planning for the upcoming event and is seek…

Praise dancers with the Grace Temple Missionary Baptist Church perform during a celebration of the legacy of Martin Luther King Jr. on Monday.

Pastor Ron Wiley talks with Lompoc Chief of Police Pat Walsh during a break in the celebration of the legacy of Martin Luther King Jr. at the Grace Temple Missionary Baptist Church in Lompoc.

In this Jan. 19, 2016, file photo, Lompoc Police Chief Pat Walsh, right, talks to an attendee during a break in the celebration of the legacy of Martin Luther King Jr. at Grace Temple Missionary Baptist Church in Lompoc.