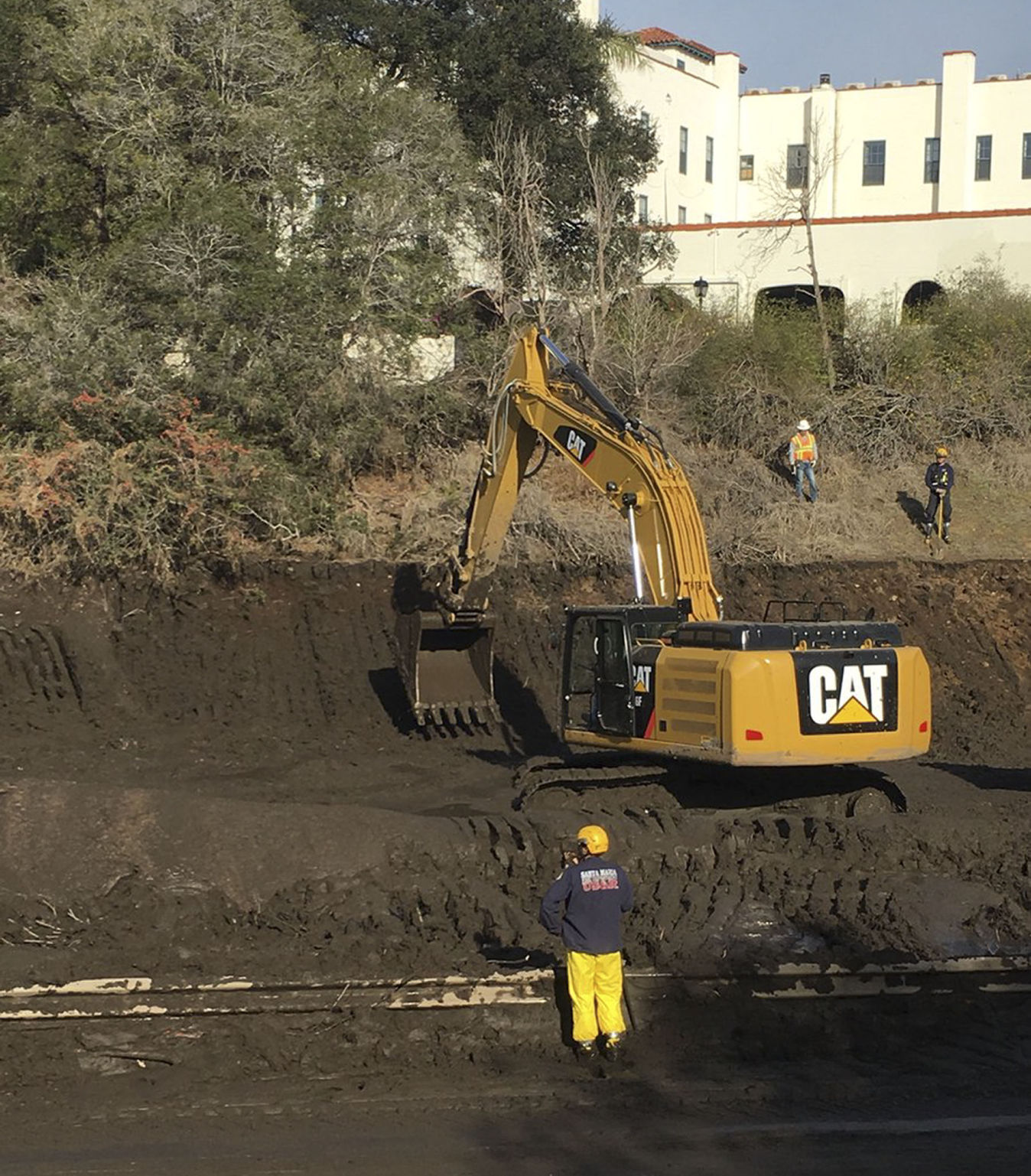 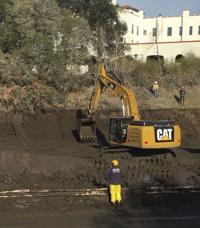 Santa Maria firefighters assist with the search for victims of the mudslide on Highway 101 in Montecito. 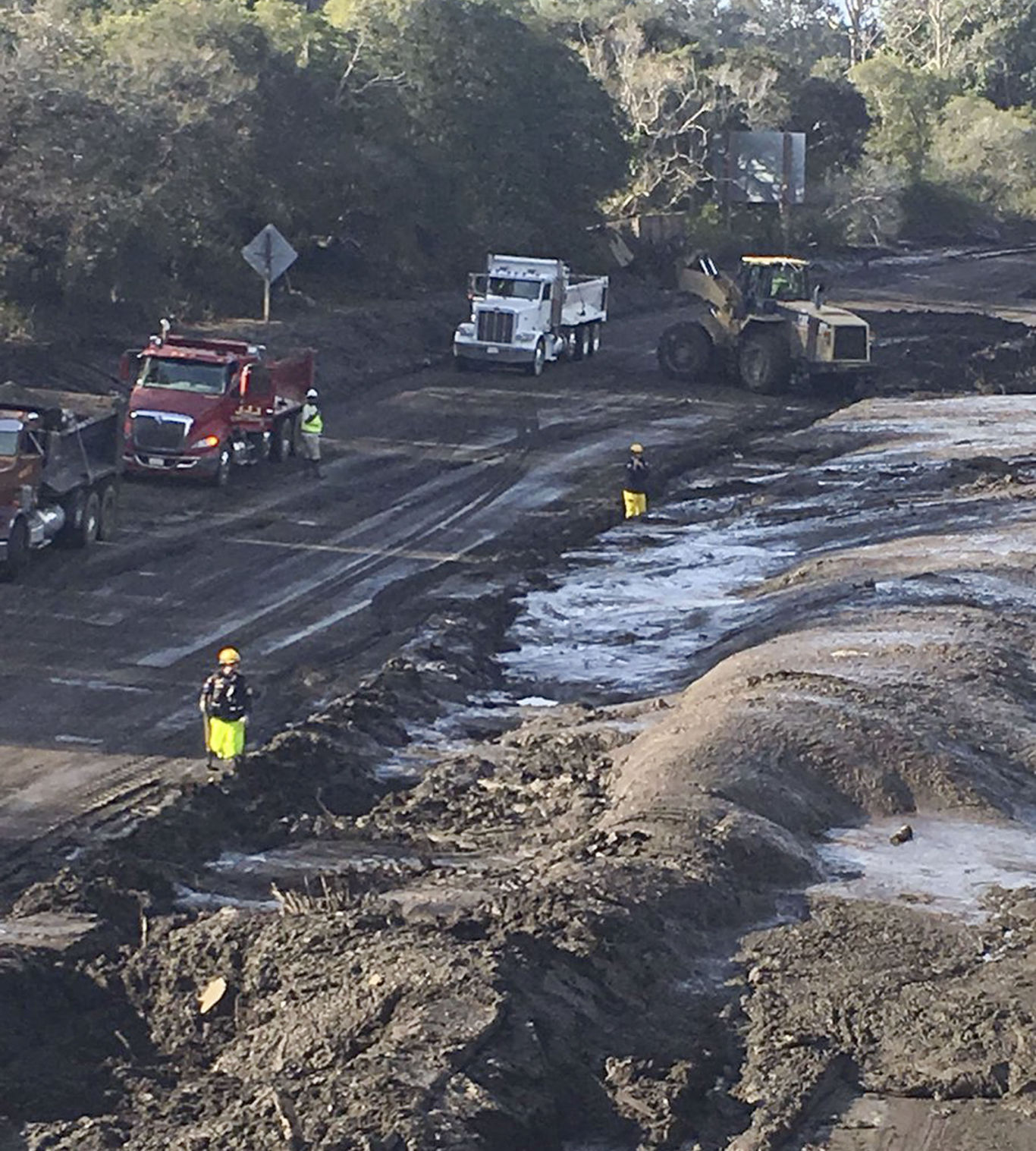 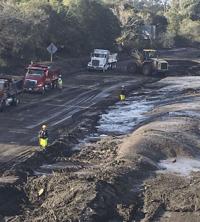 Santa Maria firefighters assist with the search for victims of the mudslide in Montecito as they focus their efforts on Highway 101.

Santa Maria firefighters assist with the search for victims of the mudslide on Highway 101 in Montecito.

Santa Maria firefighters assist with the search for victims of the mudslide in Montecito as they focus their efforts on Highway 101.

Teams on Wednesday continued searching for three people missing in the mud and debris flows that struck Montecito in the early morning hours of Jan. 9 as crews continued working around the clock to remove debris blocking Highway 101 as well as drainage channels and debris basins.

Meteorologists had predicted light rain late this week, with heavier rain early next week, but forecasters now say the Central Coast may be spared those storms, giving work crews a little breathing room in the effort to clear creeks, channels and basins.

Caltrans still has no new estimated reopening date for Highway 101 through Montecito, although officials said it would be closed at least until Monday, Jan. 22. However, crews have been able to clear away a few thousand cubic yards a day, enough in some areas to reveal the pavement.

Officials also said the Highway 101 southbound slow lane and on- and offramps at North Fairview Avenue in Goleta will remain closed through the week, as crews are stockpiling mud for earthen berms at that site. Motorists are advised to use Carneros Road or Highway 217 instead.

Until the freeway reopens, a group of 805 area code residents who joined forces as Thomas Fire Help to assist victims of the wildfire have expanded their efforts into providing alternative transportation around the closed area.

Thomas Fire Help Air Transport is an all-volunteer group of pilots with airplanes and a helicopter providing flights between Santa Barbara and Ventura.

“We are connecting those who need transit to the pilots on a one-on-one basis,” a group spokesman said. “We are prioritizing those in critical jobs — hospital, emergency response and operations, infrastructure, utilities, transportation, etc. — to ensure vital services can continue to operate.”

Caltrans said alternative transportation also is available via Amtrak, which has added cars to its Pacific Surfliner trains operating between San Luis Obispo and San Diego, and by ocean shuttle service through Condor Express and Island Packers.

“Over the last 72 hours with each model run, the storm track has been projected to move northward into Northern California,” Lindsey said. “Consequently, the Central Coast will receive very little measurable precipitation over the next seven days.”

He said a dissipating cold front will move through Thursday night into Friday morning with increasing clouds and areas of drizzle, followed Friday afternoon by an upper-level trough bringing a few sprinkles into Saturday.

“A weak cold front will move through the Central Coast on Monday morning with increasing clouds and areas of drizzle (and) a few light rain showers,” Lindsey added. “Dry weather is now projected to continue through the rest of the following week.”

Officially, the death toll remains at 20 people. A total of 28 people were injured.

A total of 1,439 people are working on mud and debris removal, damage assessment and related support tasks, officials said. The area affected in the disaster is estimated at 30 square miles.

To bypass the Hwy 101 closure

Those who need to bypass the Highway 101 closure in Montecito by don’t want to take the four- or five-hour drive using Highway 166 and Interstate 5 can check out these alternatives:

• Thomas Fire Help Air Transport, request a reservation at www.thomasfirehelp.org/transportation or by email at thomasfirehelp@gmail.com

• Condor Exxpress and Island Packers, for a schedule, visit http://condorexpress.com/101-closure-emergency-ferry-service/

• Amtrak Pacific Surfliner, for a schedule and stops, visit www.amtrak.com/content/dam/projects/dotcom/english/public/documents/timetables/Pacific-Surfliner-Schedule-W31-100917.pdf

Individuals and families working together can best prepare neighborhoods for disasters and recover from them afterward, filling in the gaps in…