In the most recent lawsuit, filed on Oct. 8, 2019, three Jane Doe plaintiffs, identified as N.R., S.C. and E.A., accused former girls head wrestling coach Justin Magdaleno of verbal/physical abuse and sexual harassment from 2015 to 2017. That lawsuit was dismissed Nov. 4 due to the settlement reached in August, according to Clayton Hall, Lucia Mar district's attorney.

Magdaleno started working as a teacher for the district at the beginning of the 2012-13 academic year and became a wrestling coach during the fall of 2013.

The three Jane Doe plaintiffs accused Magdaleno of engaging in a "predatory pattern" of abusing and sexually harassing members of the girl's wrestling team and other students. In addition, the plaintiffs accused the school district of burying the accusations against Magdaleno and negligent hiring practices, according to the lawsuit, which also included dozens of unidentified school employees, listed as Does 1 through 50, as defendants.

Two similar lawsuits were filed in August 2018 and March 2019, each by individual Jane Doe plaintiffs, in the same jurisdiction but were dismissed on Nov. 12 and Nov. 4, respectively, Hall said.

Gloria Allred, one of the attorneys representing the five Jane Does, did not provide information on the terms of the settlement she said was reached Aug. 28.

"Our five clients sought to hold the school district and Magdaleno accountable for their actions and did so by filing and pursuing these lawsuits for years," said Allred in an emailed statement. "My partner, Christina Cheung, my associate, Byron Lau, and I are proud to have represented our brave clients in their fight for justice and hope that the meaningful settlements that they received will help them move forward to a bright future."

A Lucia Mar official confirmed Thursday that the district's insurance carrier negotiated and agreed to the settlement.

Some of the behavior allegedly committed by Magdaleno included slapping and unnecessarily touching the buttocks of the female minors, including S.C. and E.A.; staring at female team members in a sexual manner; making remarks about the size and shape of their buttocks; inappropriately touching them and using "excessive" force while demonstrating wrestling moves, causing bodily injuries; and other behavior.

Plaintiff S.C. said she witnessed Magdaleno forcefully grab a female, who was also a wrestler, between the legs and lift her up, exposing her underwear to other students during a class in June 2017, according to the lawsuit.

At least two female students reported Magdaleno to school officials, who placed him on paid administrative leave in October 2017.

Following an investigation, the district reached an agreement with Magdaleno in June 2018 that allowed him to resign and receive a $31,812 severance. District officials also agreed to only provide basic information about his past employment and nothing about the allegations against him to future employers, according to the lawsuit. 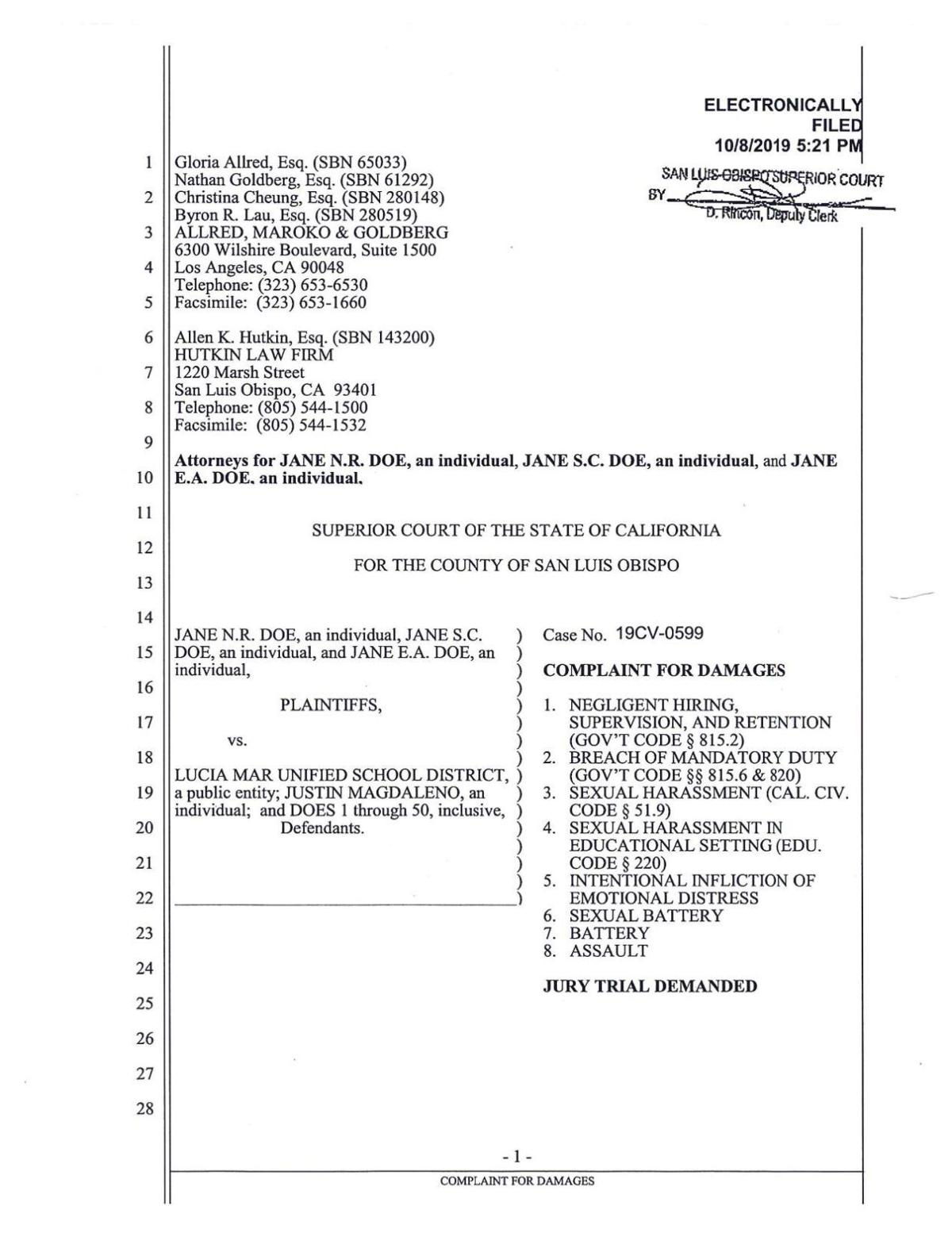 A 69-year-old man died Thursday evening after he was struck by a vehicle in the 1600 block of West Ocean Avenue, a spokesman for the Lompoc Police Department said.

More than a dozen people were arrested across Santa Barbara County during a four-day, statewide operation against human trafficking in January.

Death of inmate under investigation after apparent suicide attempt

Lompoc man arrested after Surf Connection break-in, theft of $1,200 worth of jeans

A Lompoc man was arrested on suspicion of burglary after multiple pairs of jeans were stolen from Surf Connection, which he accessed by smashi…