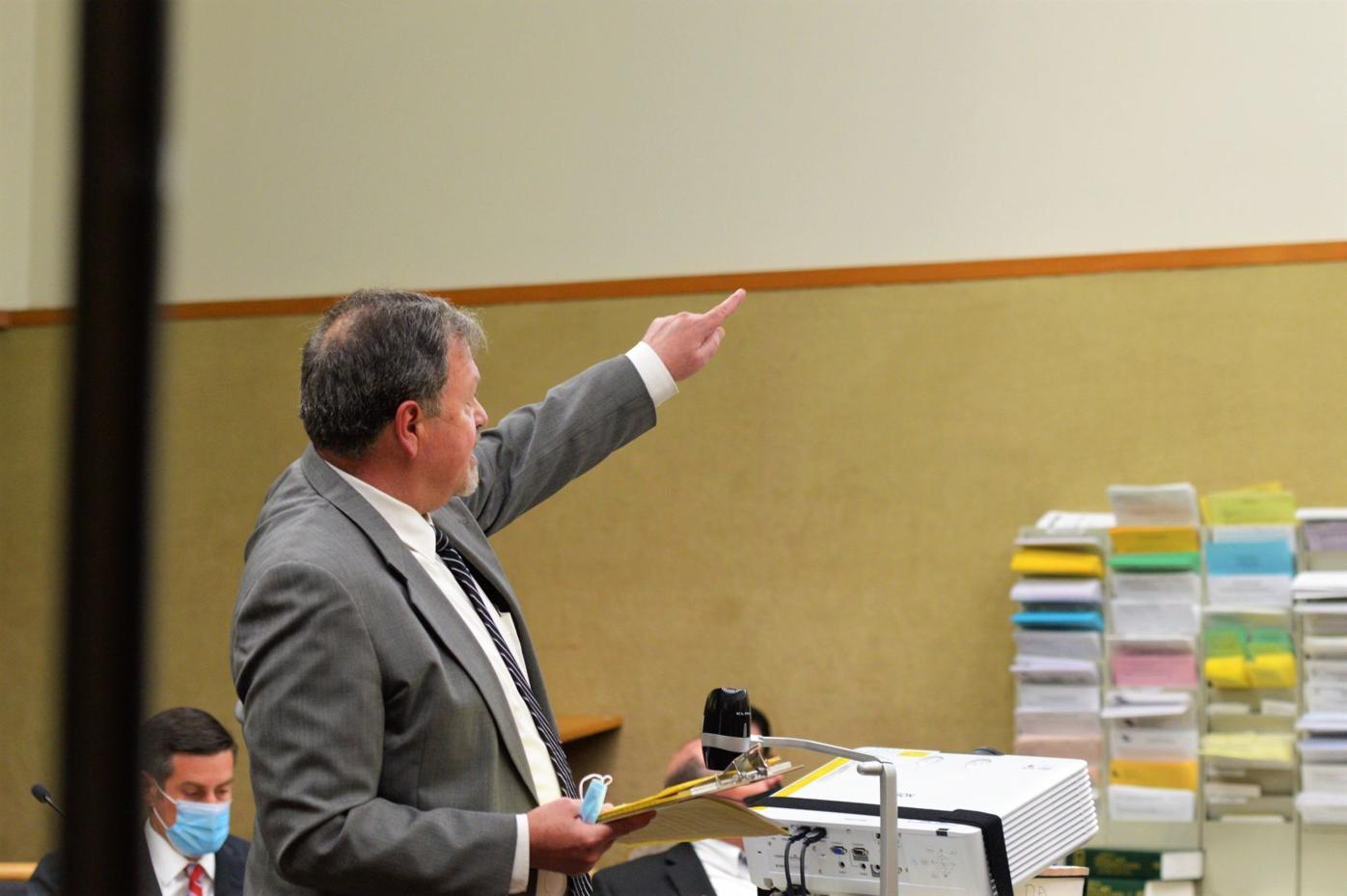 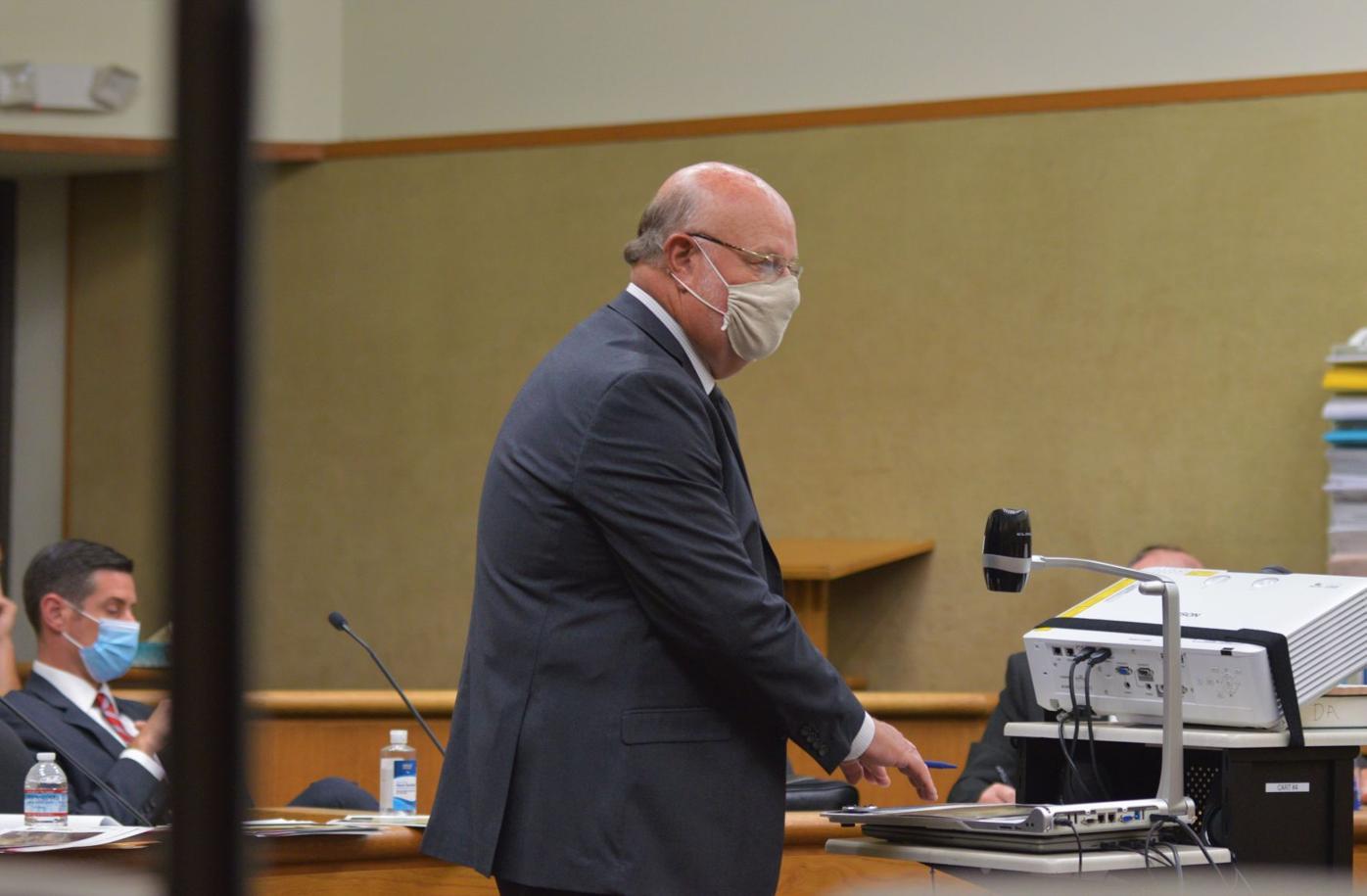 Attorney Bob Sanger, who represents Paul Flores, prepares an evidence exhibit during testimony about a suspected burial plot located during search warrants in March and April. 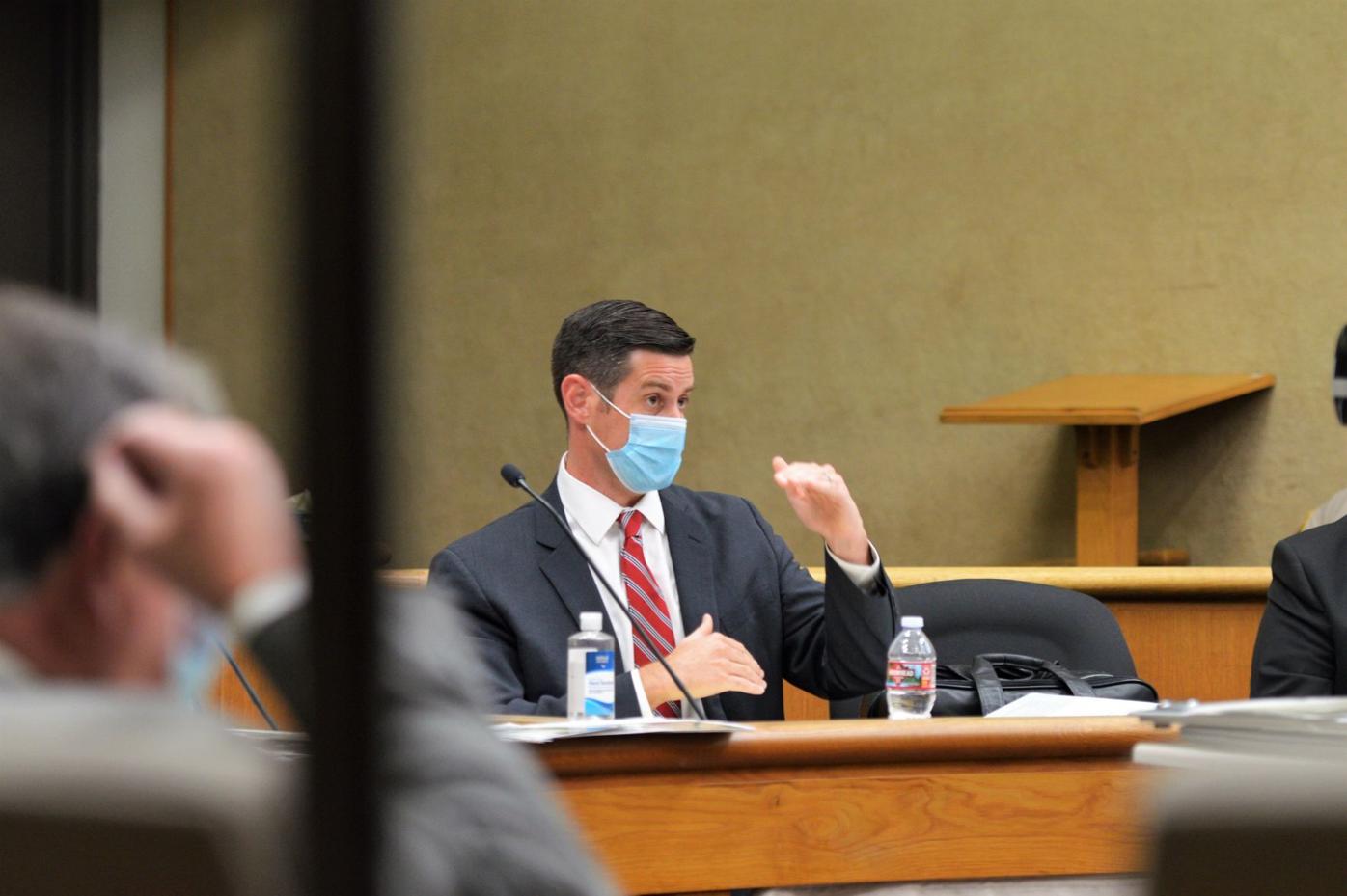 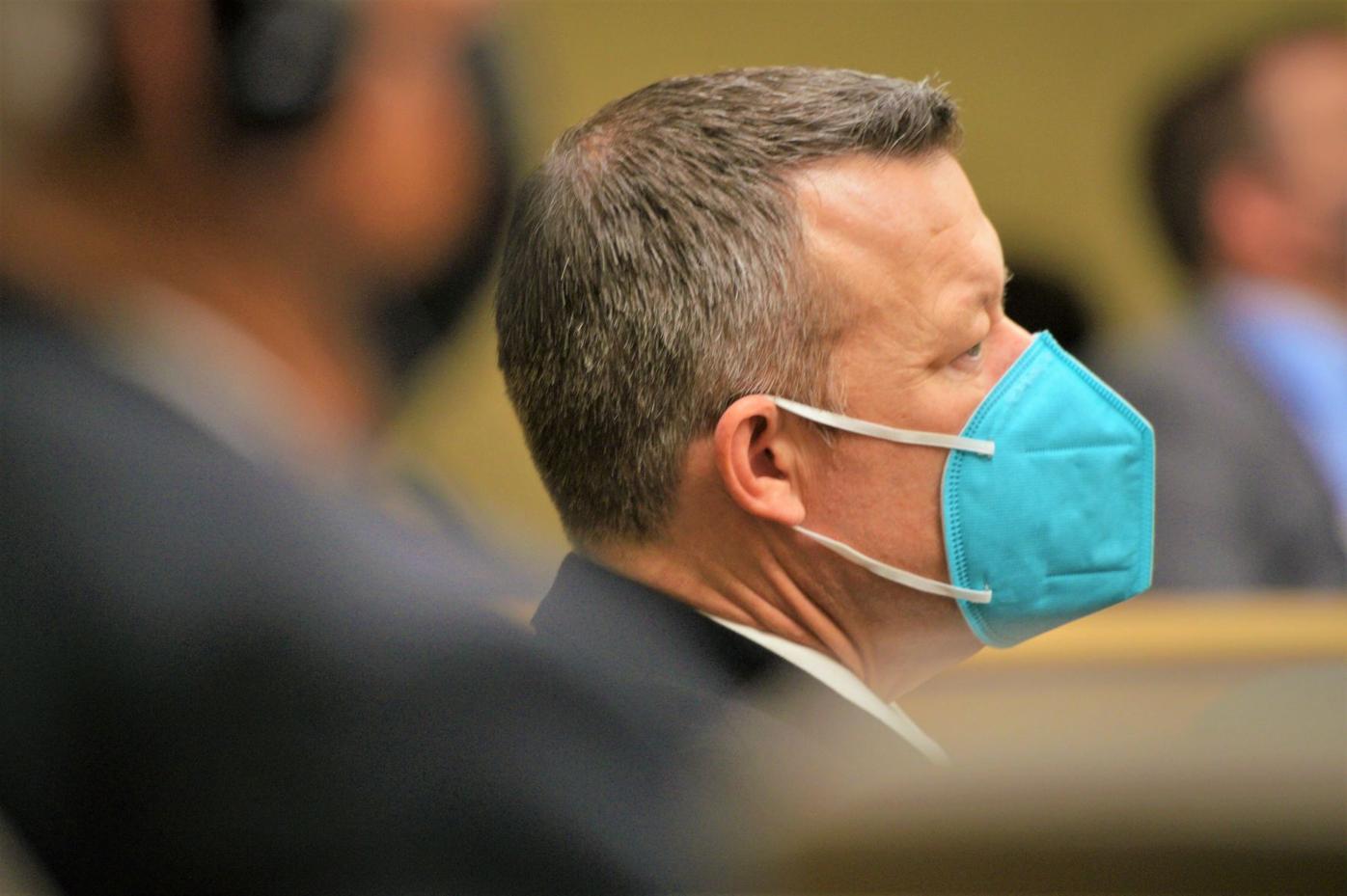 Paul Flores during his preliminary examination in Superior Court on Thursday. 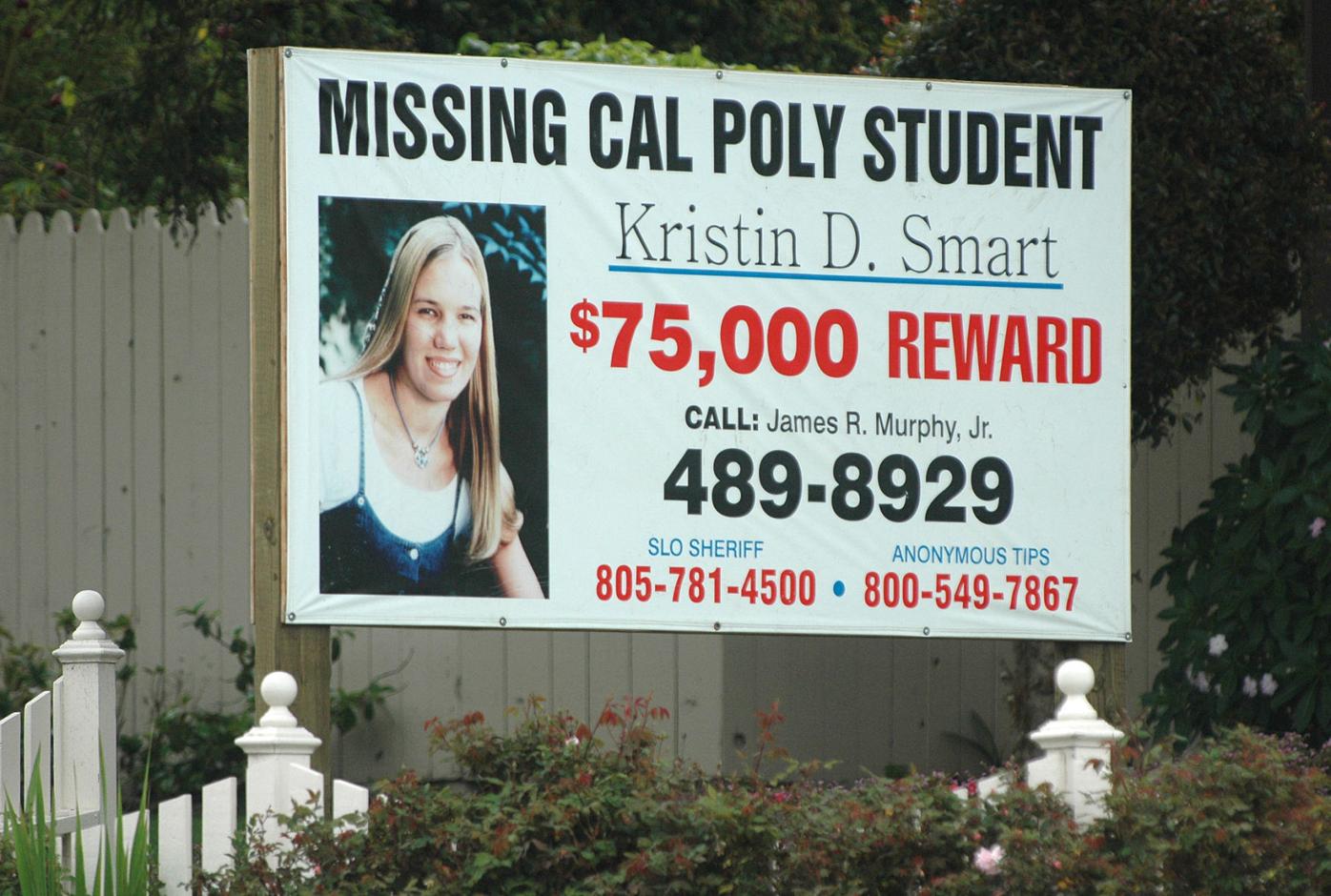 A long-standing sign on East Branch Street in the Village of Arroyo Grande offers a $75,000 reward for information leading to the location of missing student Kristin Smart.

Attorney Bob Sanger, who represents Paul Flores, prepares an evidence exhibit during testimony about a suspected burial plot located during search warrants in March and April.

Paul Flores during his preliminary examination in Superior Court on Thursday.

A long-standing sign on East Branch Street in the Village of Arroyo Grande offers a $75,000 reward for information leading to the location of missing student Kristin Smart.

Attorneys for Paul and Ruben Flores on Thursday continued their cross-examinations of a crime scene technician and her process of excavating several locations at an Arroyo Grande residence, where investigators believe the remains of 19-year-old Cal Poly student Kristin Smart were buried.

Bob Sanger, who represents Paul Flores, and Harold Mesick, who represents Ruben Flores, questioned Shelby Liddell, a forensic specialist with the San Luis Obispo County Sheriff’s Office who participated in digging for Smart’s body during March and April search warrants executed on the family home in the 700 block of White Court.

Liddell resumed testimony, after initially taking the stand Sept. 1, about two dig sites along a narrow, sloped section of dirt located in the backyard under the deck of the house — one excavated March 15 to 16 and another from April 13 to 14.

Liddell worked with registered professional archaeologist Cindy Arrington on the sites, where soil stain samples allegedly showed the presence of human decomposition, according to testimony.

A former Cal Poly Police officer and a forensic serologist testified in court Wednesday during the preliminary hearing for Paul and Ruben Flores, who are charged in the disappearance of former student Kristin Smart in 1996.

Paul Flores, 44, of San Pedro is charged with the murder of Smart. His father, 80-year-old Ruben Flores, is charged with accessory to murder after the fact and is accused of hiding her body underneath his house.

Both men were arrested and charged in April, nearly 25 years after Smart’s disappearance. They both pleaded not guilty.

Paul Flores was last seen with an intoxicated Smart near the intersection of Perimeter Road and Grande Avenue, just steps away from their dorms, at about 2 a.m. on May 25, 1996, according to Cheryl Manzer, a former student who testified walking with them before splitting off from the two.

Smart was never seen again. She was declared legally dead in 2002 and her body has not been recovered.

Investigators believe Smart’s remains were once located under Ruben Flores’ deck, where human decomposition stains were reportedly found in the dig sites.

Smart’s remains were allegedly removed during a nighttime operation sometime in early February 2020, according to court documents.

Prior to the digs, ground-penetrating radar located anomalies in the soil in specific places under the deck, where cadaver dog searches on the same day in March showed changes in behavior but no alerts.

Sanger’s and Mesick’s inquiries focused on Liddell’s proficiency as a crime scene technician and whether or not she could have been influenced by the dog and GPR searches.

Questions probed the details of dirt removal, the cataloging process, removal of the deck and the soil samples that allegedly tested positive for the presence of human bodily fluids, including blood.

One site focused on the western portion of the sloped area under the deck, where stains were found in a 4-feet by 6-feet area known as Grid 1, according to testimony.

Detectives initially searched for human bones, skimming a half-inch to one inch layer of soil off the top each time in a process that took a couple of hours, according to Liddell.

‘Something was there’: Archeologist describes Arroyo Grande dig search in Kristin Smart case

Liddell was told a sample taken from the March dig tested positive for blood, which his why they returned in April to collect more samples, she said.

When they returned, Liddell said a portion of the deck appeared to have been sawed off to access a dig site located next to the initial one but further up the slope in a spot where she admitted it would be difficult to bury a body, but not impossible.

In that dig, Liddell said an oval-shaped stain was identified at about two to two-and-a-half feet down.

The source of the stains was identified as human, although the same tests also indicated that it could be from a large primate, or ferrets and related animals, including a native weasel species, according to testimony from Angela Butler, a DNA examiner at the Serological Research Institute in Richmond.

Deputy District Attorney Christopher Peuvrelle asked Liddell if any animal remains, including weasels, were located at the site and she said no.

Sanger asked Liddell why the photos of the stains appeared as if they were not disturbed.

“The hole could have been dug up and re-packed but the stain would have had to have been deposited after that,” Liddell said, adding that stains were found in several areas and changed in size.

Sanger asked Liddell if someone tested the discharge of an alleged sewage valve located next to the dig site.

“I believe someone did, yes,” Liddell said.

After that, van Rooyen heard defense arguments to introduce witness testimony, including allegations that someone else might have killed Smart.

Van Rooyen allowed some testimonies to proceed, but denied others, including from convicted killer Scott Peterson, who was a student at Cal Poly when Smart went missing.

The preliminary hearing continues at 9 a.m. on Sept. 20 in Superior Court.

Attorneys rested their cases Monday in the weekslong preliminary hearing for Paul and Ruben Flores, who are charged in the death Kristin Smart, the 19-year-old Cal Poly student who went missing on May 25, 1996.