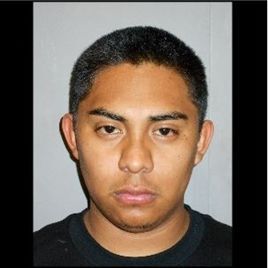 Lompoc Police arrested 19-year-old Pablo Torres, a registered gang member who was found with a loaded rifle with a pistol grip in his truck, after an alleged unprovoked attack on a 12-year-old Sunday.

A Lompoc man and registered gang member was arrested on suspicion of gun charges Sunday after a 12-year-old was allegedly assaulted in an unprovoked attack.

Pablo Torres, 19, was arrested shortly before 10:30 p.m. in the 700 block alley of North E and F streets after the assault in which two Hispanic males, including one holding a rifle, attacked the juvenile, according to Lompoc Police Sgt. Scott Morgan. Torres was on parole at the time of the incident, he said.

Torres' truck was allegedly spotted fleeing the area of the assault, which was not disclosed, and was later seen speeding in an alley he frequents.

Police located the parked truck moments later and spotted Torres nearby. The suspect fled but was apprehended minutes later, according to Morgan. A search of the truck revealed a loaded rifle with a pistol grip.

Torres was arrested on suspicion of illegally possessing a firearm and ammunition, illegal possession of a short-barreled rifle, obstruction and a parole violation, according to Morgan. Torres' parole also was revoked.

2 people shot after altercation at 7-Eleven store in Lompoc

Lompoc Police on Thursday released six dash cam videos and a 911 call related to the March 28 fatal officer-involved shooting of 26-year-old Krys Ruiz near the intersection of East Walnut Avenue and the 100 block of North H Street.

Susan Flores, mother of Paul Flores, and her boyfriend are accused of relocating the remains of missing Cal Poly student Kristin Smart in an amended lawsuit filed by Smart's family.

Two male suspects wearing face masks were captured on a surveillance camera May 2, smashing the front window of New Era Sound in Lompoc before…

Lompoc Police arrested 19-year-old Pablo Torres, a registered gang member who was found with a loaded rifle with a pistol grip in his truck, after an alleged unprovoked attack on a 12-year-old Sunday.