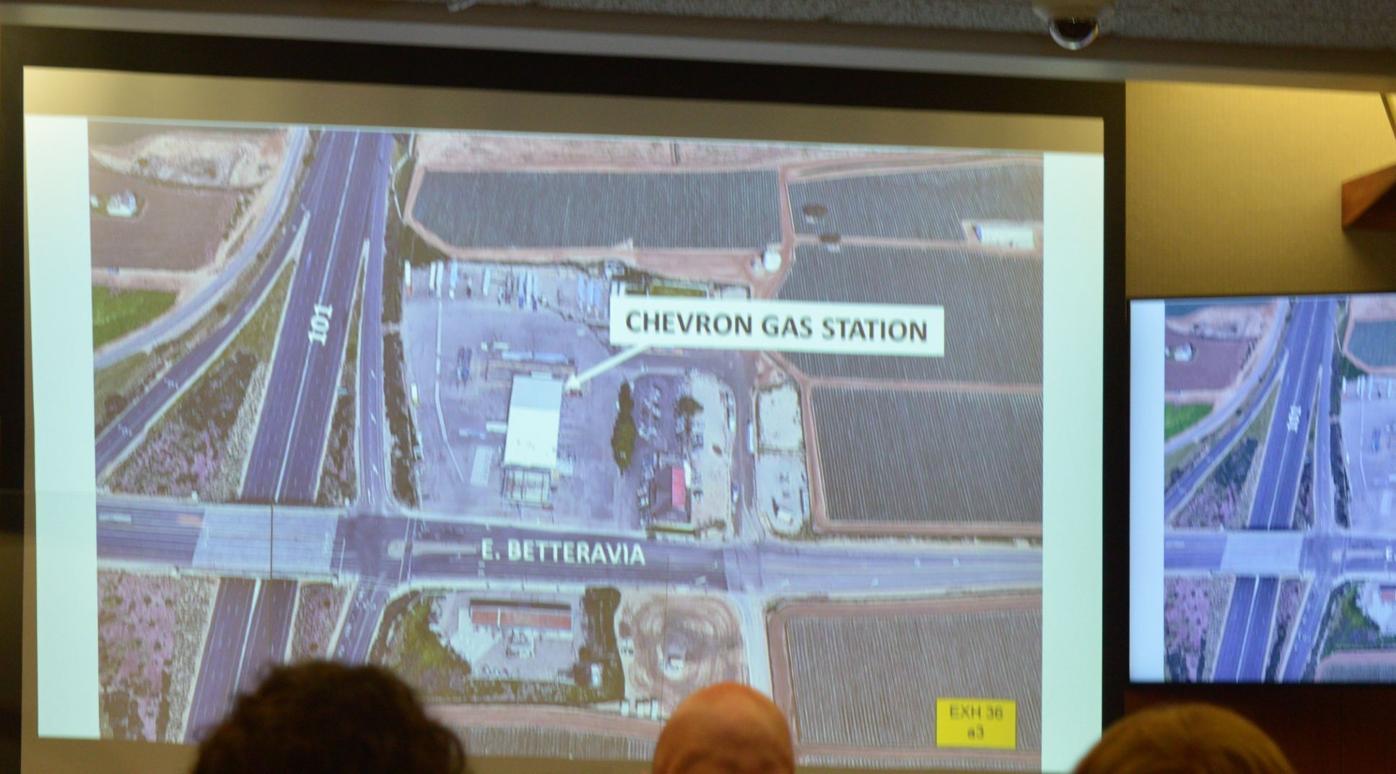 Prosecutors on Thursday presented a GPS map of the Chevron gas station where defendant Tranquilino Robles Morales allegedly waited for two individuals they were tracking, according to cell phone calls intercepted by investigators in February 2016. 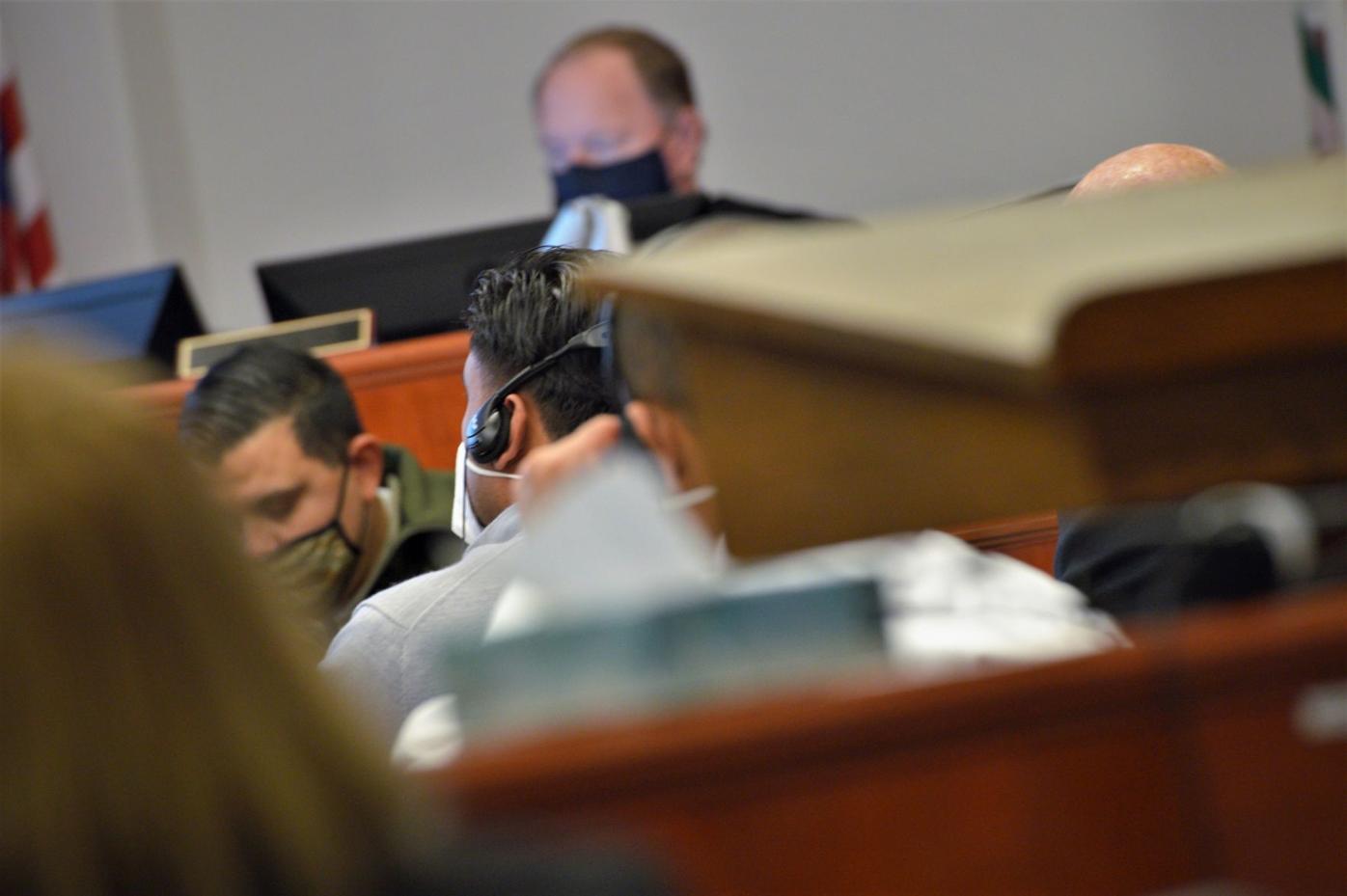 Prosecutors on Thursday presented a GPS map of the Chevron gas station where defendant Tranquilino Robles Morales allegedly waited for two individuals they were tracking, according to cell phone calls intercepted by investigators in February 2016.

A former Santa Maria Police detective continued testimony Thursday in the MS-13 trial, further detailing information he gleaned from coded words heard over a wire about what appeared to be a surveillance operation being conducted by the defendants.

Michael Huffman, now an investigator with the Santa Barbara County District Attorney’s Office, was conducting wiretap operations on the defendants — suspected members of MS-13 called a “violent transnational criminal organization” by the FBI.

Huffman was seven days into his operation on Feb. 6, 2016 when he heard the defendants' talk about tracking two unknown individuals who they ultimately intended to kill, according to court records.

“We had almost zero information on where they were going [to be] and who they were looking for,” Huffman testified.

Two detectives assigned to investigate 10 alleged MS-13 killings across the Santa Maria Valley from 2013 to 2016 testified in court Wednesday about their wiretap operations, which ultimately set the stage for the takedown of more than a dozen members of the city’s local clique following a police operation one month later.

The eight defendants were arrested as part of Operation Matador in March 2016, the result of a yearslong investigation into 10 killings across the Santa Maria Valley from 2013 to 2016.

All eight have pleaded not guilty.

Huffman initially intercepted a Jan. 30, 2016 call between Jose Balmore Saravia Lainez and Morales, who told Lainez to come to the house to talk about a "gardening cleanup" job, but instead referred to plans for an assassination, according to court records.

Tomas was a separate defendant arrested in the Matador conspiracy, although her charges were dismissed in July 2016, according to court records.

Gang crews were positioned between Sisquoc and Santa Maria, including Bandit, who was at the Chevron gas station near the intersection of Betteravia Road and Highway 101; and Mimi, who was working in a nearby field, Huffman testified.

The defendants allegedly determined the two targeted individuals would leave work at 1 p.m., according to audio recordings played in court.

"OK, let's make sure those f--kers don't get away, dog," Lagrima allegedly said during during a call placed at 12:14 p.m.

Approximately half an hour later, at 12:49 p.m., several defendants hid among field workers to "play dumb" while trying to clandestinely identify their targets' vehicle, Huffman testified.

During a call recorded at 12:51 p.m., Lagrima identifies a green Toyota with discolored doors driven by the "son-of-a-bitch," a person named "Marino" who pulled into a gas station.

Huffman said it was too risky placing undercover officers in the area because they might be detected.

The trial resumes at 8:30 a.m. Monday in Department 8 of Superior Court in Santa Maria.

A witness in the Matador trial recalled on Monday noticing two El Salvadoran men — including one with a “503” tattoo on his hand — who joined the 12-person work crew he was on cutting broccoli near Sisquoc sometime in mid-January 2016, not too long after he was hired.