A Lompoc religious nonprofit is accusing a Wyoming-based organic farm and cannabis company of stealing water it uses to grow food and blocking access to a well on a neighboring parcel, despite a decades-old legal agreement allowing them to do so, according to a lawsuit filed in Santa Barbara County Superior Court.

In the lawsuit, filed on July 16, the nonprofit Sunburst Farm and Sanctuary alleges Isabella Organic Farms is physically blocking a well with trash and other objects located on the nonprofit's property.

Additionally, Sunburst has accused the defendants of trespassing, harassment and misappropriation of water from the well's delivery system.

Defendants include Sierra Botanicals, a California-based cannabis company that leases the land from Isabella Farms owner Alberto Rodriguez, who occupies the property.

The nonprofit, also known as the Sunburst Church of Self-Realization, was founded in the 1960s by the late Norman Paulsen, a Santa Barbara native who followed a belief system that incorporates elements of Christianity, mysticism and Hopi Native American symbolism.

In 1991, the nonprofit purchased a 53-acre parcel 5 miles south of Buellton along Highway 101. In 1996, the nonprofit also acquired a 4,000-acre property south of Lompoc for the sanctuary, which has been described as a "hippie commune."

The sanctuary is known locally for holding meditation classes and has at least 10 permanent residents who live and work at both locations, according to spokeswoman Elena Anderson. 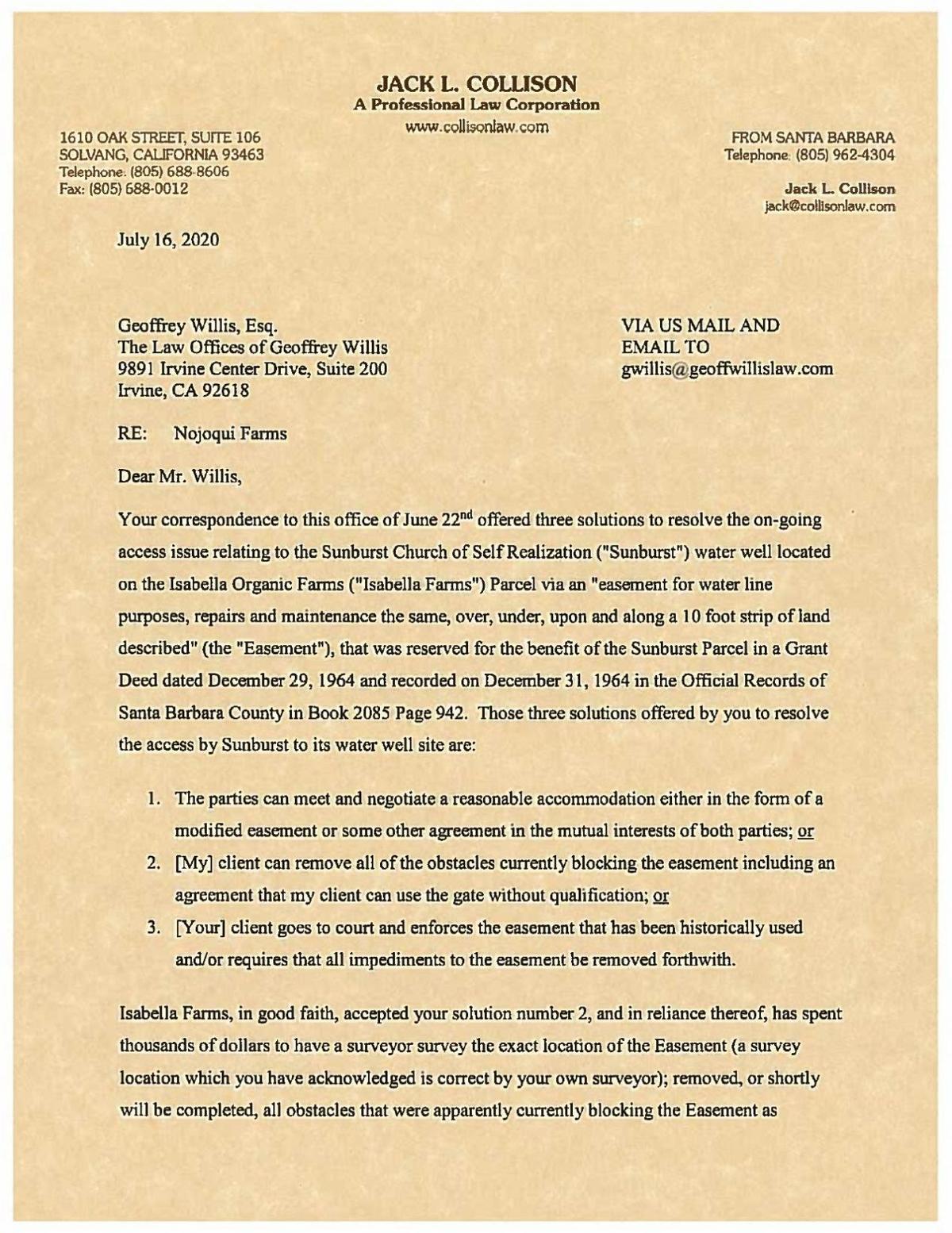 An easement established in 1964 created a 10-foot-wide path to allow Sunburst to access the well, which is fed by nearby Nojoqui Creek.

Sunburst Farm alleges that defendants started blocking access in January 2020, including for workers, and also posted restrictions, such as demanding 24-hours advance notice, according to Sunburst Farm attorney Geoff Willis.

In addition, tests indicated that the defendants diverted a "significant" amount of water over the course of six months, the lawsuit states.

"Given that the plaintiff's property is used for agriculture, the well and its continual function is of utmost importance to the plaintiff," according to the lawsuit. "It is the primary agricultural well for [Sunburst] and its agricultural operations cannot survive without that well being monitored regularly."

Isabella Farms and Rodriguez could not be reached for comment. Sierra Botanicals owner Justin El-Diwany declined to comment for the story.

According to a letter written to Willis on July 16, Jack Collison, attorney for Isabella Farms, considered the problem resolved after Isabella Farms complied with Sunburst's demands and removed the physical barriers "at a large expense."

The easement gives access in order perform maintenance work on the well, but disputes Willis' claim that the law requires expansion of the easement for vehicles, if needed.

The well is located in the southwest corner of the 5-acre parcel, away from the boundary with Sunburst, although a line supplies water to Sunburst via the easement.

"It seems reasonable to believe that the intent was in fact to limit the use of the easement by large vehicles," Collison said. "Sunburst's desire to use it now in that manner does not give it any right to go outside it trespassing on Isabella Farms' land."

A case management conference is scheduled at 8:30 a.m. Nov. 11 in Department 2 of the Superior Court in Santa Maria.

A Santa Maria man and woman were arrested Tuesday in connection to the death of a missing person in 2018, according to a Santa Barbara County Sheriff's spokeswoman.

A Santa Maria man has been sentenced to 12 years in state prison after pleading guilty to charges stemming from the attempted murder of his girlfriend in June 2019.