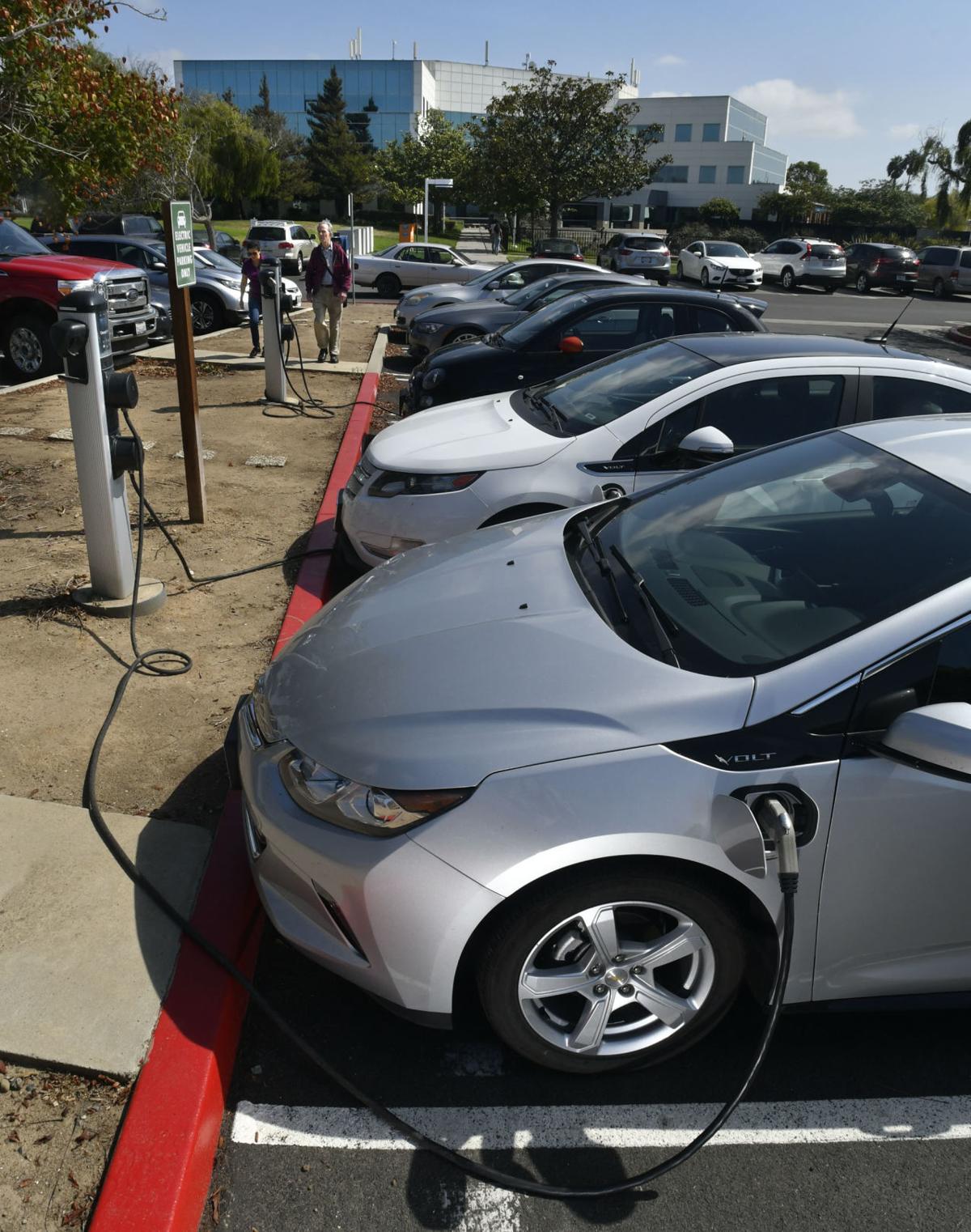 Electric vehicles charge outside Santa Barbara County's Betteravia Government Center in Santa Maria on Sept. 12, 2017. Less-polluting vehicles for the county and community is one of the ways greenhouse gas emissions can be reduced, as noted by officials in a report to the county. 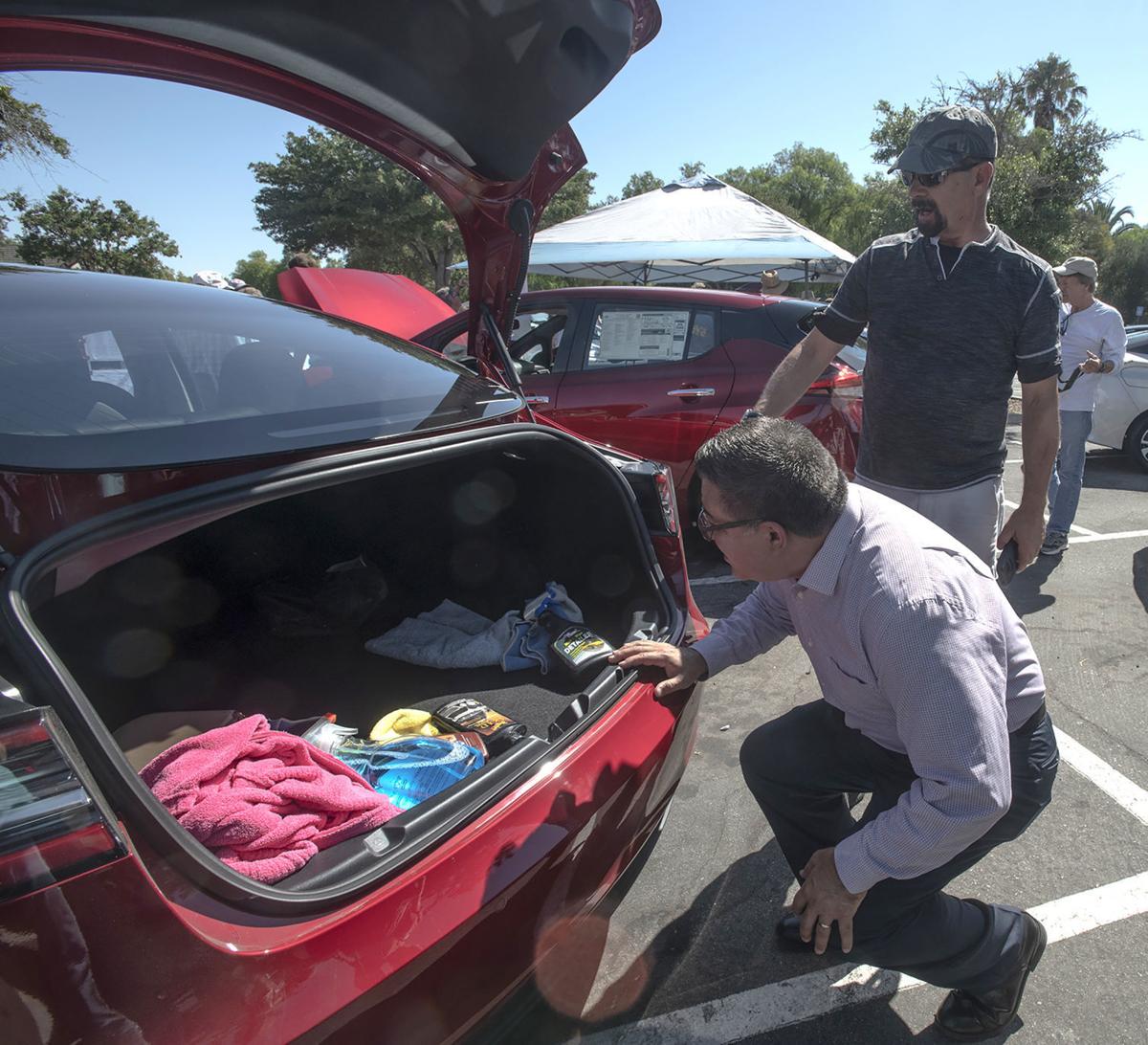 A proposal to install a Tesla charging station with more than two dozen ports at the Town Center will be considered by the Santa Maria City Council on Tuesday.

The proposal calls for a five-year agreement with Tesla, which will install a self-branded charging station with 32 parking spaces outfitted with ports to charge electric cars inside the Town Center East parking garage, according to Brett Fulgoni, assistant director of the Santa Maria recreation and parks department.

Additionally, Tesla has agreed to pay Santa Maria $20,000 each year with a 3% increase to rent the space in the garage after five years.

"It's not common that people pay rent [for charging stations]," Fulgoni said, adding that the charger could result in increased business sales and more tax revenues. "The hope is that when Teslas are charging, the drivers will patronize local merchants."

Several electric vehicle charging stations have been installed in various locations throughout Santa Maria, including the Betteravia Government Center, Lowe's and Marian Regional Medical Center, according to plugshare.com.

Tesla has several charging stations of its own already installed in the county, including in Santa Barbara, Solvang and at Fess Parker Winery near Los Olivos. The one proposed for the Town Center parking garage will be the company's first in Santa Maria, if approved.

Included in the charging station will be 20 "level-3" chargers, or "Superchargers," which provide a faster charge and are meant only for Tesla vehicles; and 12 "level-2" chargers, which provide electricity for any brand electric vehicle but provide a slower charge.

Charging a Tesla vehicle at a Supercharger delivers a consistent, nearly 72-kilowatts stream of power that charges the vehicle in about an hour, even if another vehicle is charging in another stall, according to the company.

The station would ultimately impact 38 spaces, with six of the spaces required for the station's transformers, according to the agreement.

Tesla first approached Santa Maria in 2020, before the pandemic, originally offering only 24 self-branded charging ports and no rent, according to Fulgoni, who worked with the Palo Alto-based company over the course of the year to negotiate a deal. Using the charging station would come at no cost to the public.

The agreement calls for Tesla to foot the bill for the station's construction, which will include the garage being outfitted with electrical charging equipment, and repaving and restriping portions of asphalt.

In addition, the agreement includes options to renew the contract two times at five years each, for a total of 15 years. Tesla makes the first renewal on its own after five years and Santa Maria must approve the second renewal, which comes after 10 years, according to the agreement.

If the city doesn't approve the contract, then the city has two options: leave the parking garage as it is or install an equivalent charging station, which could cost in the hundreds of thousands of dollars, according to Fulgoni, adding that he hasn't researched specific costs.

"The availability and ubiquity of charging infrastructure may also assist in the marketability of electric vehicles in [Santa Maria]," according to the report, which states that staff considers the agreement to have a positive impact on the community. "There is also a potential benefit to those local and national chain businesses located in Town Center East," the staff report reads.

An attorney is calling for the California Attorney General to investigate the March 28 officer-involved shooting of a Lompoc transgender male because of officials' alleged conflicts of interest in a letter sent to the Santa Barbara County Sheriff's Office, the District Attorney's office and the Lompoc Police Department.

The father and son charged in the suspected 1996 death of Cal Poly student Kristin Smart made their first appearances in San Luis Obispo County Superior Court on Thursday, but did not enter pleas.

Electric vehicles charge outside Santa Barbara County's Betteravia Government Center in Santa Maria on Sept. 12, 2017. Less-polluting vehicles for the county and community is one of the ways greenhouse gas emissions can be reduced, as noted by officials in a report to the county.