Elementary schools in Santa Barbara County will be allowed to open for in-person education provided they apply for waivers and submit a plan that meets California Department of Public Health and county health officer scrutiny.

The potential for schools offering classes for kindergarten through sixth grade to reopen was announced Tuesday during a report to the County Board of Supervisors and is based on the drop in the county’s case rate over the previous 14 days.

Do-Reynoso noted that’s not enough to meet the criteria for being removed from the state’s monitoring list, which is a case rate of 25 or fewer per 100,000 population.

“The county is still on the [state’s] monitoring list, but because the transmission rate has fallen below the magic number of 200 per 100,000 population, we are able to issue those waivers,” said Dr. Henning Ansorg, county health officer.

School superintendents were to be notified of the availability of waivers Tuesday afternoon, Ansorg said, and waiver applications were to be made available online sometime this week.

He said the County Public Health Department is finalizing the waiver and setting up an email address schools can use to submit their applications, which the county will start accepting Friday.

Waivers could be issued — or denied — about two weeks after completed applications have been received by the county, Ansorg said.

Whether a school obtains a waiver to reopen will be heavily influenced by its plan that will detail cleaning and disinfecting procedures, provision of small class sizes, control of entrance and egress, and procedures for daily screening of staff and student health.

Other details in the plan include mandating that staff and students from third to sixth grade wear masks, recommending that kindergarten through second grade students wear masks and maintaining social distancing, Ansorg said.

General hygiene practices, procedures for identifying and tracing contacts and programs for staff training, family education and communication with the community must also be included in the plan.

The school must also demonstrate that it has the ability to institute testing on individual staff and students on short notice, Ansorg said.

Third District Supervisor Joan Hartmann asked what would happen if schools open under a waiver, then the county’s case rate rises again.

“The governor has determined they would not rescind the waiver,” Ansorg said, noting that wouldn’t be fair to families, but the county’s schools would be monitored more closely, with a focus on individual schools, and student and staff testing likely would be required.

Do-Reynoso had other good news for supervisors, including that the rate of new cases over the past two weeks dropped 41% in the Santa Maria area, 38% in the Lompoc area and 25% in Santa Barbara.

However, she was concerned about an 18% increase in Goleta and, even more concerning, a 255% increase in Isla Vista, which she attributed to students returning to UCSB, high-density housing, and increasing social movement and gatherings.

County demographic statistics reflect those issued by the World Health Organization showing the spread of COVID-19 is being driven by people in their 20s, 30s and 40s, with 66% of the county’s cases among the 18-to-49 age groups, Do-Reynoso said.

For that reason, she said, the Public Health Department is focusing its community outreach on residents of those ages.

We are working hard to get answers about the impact and reaction to the coronavirus in Santa Barbara County, this is a collection of those stories. Do you have a question about coronavirus in Santa Barbara County? Post them to our Facebook page, or email MCooley@SantaMariaTimes.com.  You can support the work of local journalists working hard in your hometown by signing up for a News+ Membership online.

Due to Santa Barbara County's status in the state's purple tier, all nonessential gatherings and activities will be restricted from 10 p.m. to…

Santa Maria will receive more than $960,000 in a second round of COVID-19 federal CARES Act funding that will allow for increased rental assis…

Santa Barbara County will send a letter to Gov. Gavin Newsom asking him to modify the new purple tier requirements in his Blueprint for a Safe…

Santa Barbara County's COVID-19 case rate hit 7.1 per 100,000 people as of Monday, rising into purple-tier territory and moving the county back into the state's most restrictive phase. Neighboring San Luis Obispo and Ventura counties also moved backward to purple.

After temporarily closing due to a confirmed student COVID-19 case in early November, the number of COVID-positive students at St. Joseph High School in Orcutt has grown to 11, with school leaders planning to resume on-campus learning for all students Tuesday.

Due to a positive COVID-19 case among its student body, St. Joseph High School in Orcutt will resume distance learning for all students until …

Santa Barbara County’s unemployment rate has fallen to about half of its April spike brought on by the COVID-19 pandemic, but it’s still runni…

Although K-12 schools in Santa Barbara County were officially permitted to reopen Oct. 13, Orcutt and several other public school districts decided against bringing back students just yet due to local COVID-19 case rates that outpace the rest of the county.

As agricultural workers continue to have the highest COVID-19 case numbers in Santa Barbara County, workers who have tested positive and need …

Hancock College will continue offering the majority of classes in a distance learning format in the upcoming spring semester, college official…

Two months after the official start of the school year in August, freshmen at St. Joseph High School in Orcutt saw their campus for the first …

For Righetti senior Kidasi Nepa, the news that the Santa Maria Joint-Union High School District would not be returning to in-person learning u…

While reopening plans were approved for the Orcutt branch, the Santa Maria main library and its branches in Guadalupe, Los Alamos and Cuyama will remain closed except for curbside pickup service for the time being.

By midmorning Tuesday, a steady line of vehicles could be seen winding through the parking lot at Hancock College's Santa Maria campus during …

In order for Santa Barbara County to move into the state's next reopening tier, COVID-19 rates will need to brought down in the 21 most disproportionately impacted neighborhoods in the county, officials from the county Public Health Department said Friday.

In preparation for the fall holidays, the Santa Barbara County Public Health Department released new guidance on Friday regarding best practices for celebrating Halloween during the COVID-19 pandemic.

'This is a good step': Santa Maria business owners react to news of more reopenings

Over 150K coronavirus tests have been conducted in Santa Barbara County

The Santa Barbara County Public Health Department this week reached the milestone of 150,000 COVID-19 tests conducted since the start of the p…

Santa Maria movie lovers may once again be able to see new releases on the big screen as soon as next week, with Regal Edwards theaters in San…

'We're not done yet': COVID-19 survivor Melissa Meza slowly recovers with husband Louis by her side

For COVID-19 survivor Melissa Meza, there are certain aspects of her battle against the virus, which included 10 weeks of hospitalization, lif…

Santa Barbara County finally hit the state’s metrics to move from the purple tier into the less-restrictive red tier under the state’s Blueprint for a Safer Economy, officials said Tuesday, but the numbers must hold for another week before the change would become official.

Although the percentage of positive test results — the other metric being monitored by the state — has dropped into the orange, or “moderate,” tier, the new case rate still exceeds the threshold set by the state for moving the county into the red, according to a report delivered Tuesday to the Board of Supervisors.

After changing messaging surrounding COVID-19 testing in Santa Barbara County, the Public Health Department is opening testing to all resident…

Private schools in the Santa Maria Valley are starting to get the green light for modified in-person learning, with Pacific Christian School p…

Santa Barbara County confirmed 138 additional COVID-19 cases over the Sept. 5-7 weekend, followed by three additional cases on Tuesday, with public health officials urging residents to remain vigilant in order to move the county into the next reopening phase.

St. Joseph High School in Orcutt has opened up the option of targeted cohorts to its families, allowing a limited number of students in need o…

Failed businesses, job losses and temporary layoffs caused by the COVID-19 pandemic have hit families hard in Santa Barbara County, and the fi…

A total of 14 Santa Barbara County schools and school districts have submitted applications for waivers to reopen classrooms for in-person instruction, and 10 of those are expected to go to the state for approval Wednesday, the county health officer said Tuesday.

Attitudes toward the state’s new COVID-19 metrics, county risk classification and blueprint to reopening the economy were divided on the Santa…

After closing to the public in March, the Santa Maria Public Library may finally be able to reopen for limited grab-and-go services, under a n…

Elementary school students, like these headed for Alice Shaw Elementary School in October 2018, could once again be on their way to classes on campuses if their schools qualify for a waiver from the Santa Barbara County Health Department and California Department of Public Health.

A pie chart from Santa Barbara County Department of Public Health shows how 66% of the COVID-19 cases in the county fall in the 18-to-49 age range, so outreach efforts will focus on that group of residents. 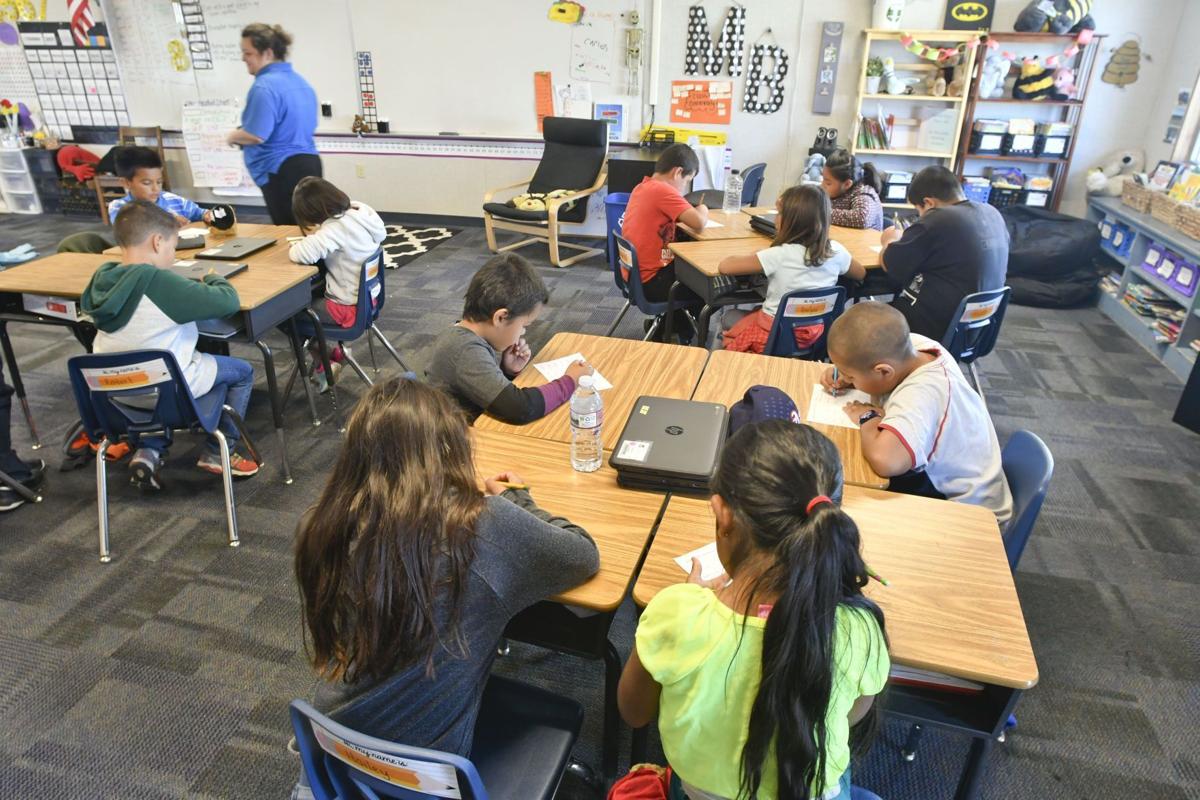 Students work in small groups inside a classroom at Mary Van Buren Elementary School in Guadalupe in this photo from November 2017. Elementary school students in Santa Barbara County could return to classrooms within weeks if they can qualify for a waiver from the Public Health Department.