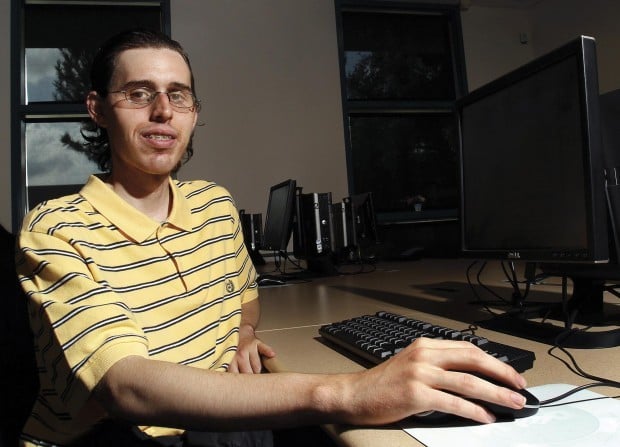 Hancock College student Chris Young recently traveled to Vienna, Austria, to create a website for a small business owner who found him through an online employment site. 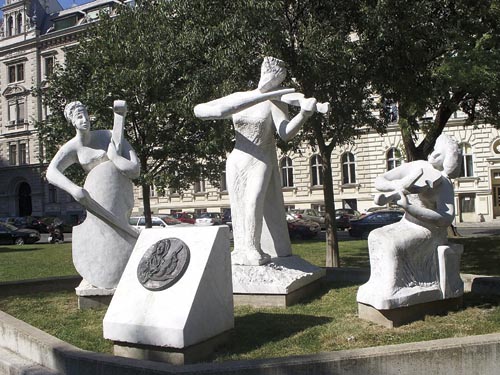 Sculptures stand near the student hostel in Vienna where Christopher Young stayed for two months.

Hancock College business administration student Chris Young put his skills to use recently on a work-related trip to Austria.

Young, who tutors students in computer science at Hancock, was hired through an online employment site to assist with the creation of a website for an Internet-based company in Vienna.

Young, 23, said that since the site has not yet been launched, he is under a “gentlemen’s agreement” not to disclose specifics or release photographs pertaining to the site. He did reveal that the website will be a type of used-car processor.

Last September, Young said, he won the bid for the assignment that the company posted on Freelancer.com, an Internet service that links business owners with freelance programmers, web designers and graphic designers.

According to Young, he and the owner, Mohammed Aoun, worked together via computer and telephone for nearly a year, but the distance between them made the work increasingly more challenging.

“Due to time-zone differences, real-time collaboration was difficult as long as I remained in the U.S. and he in Vienna,” he said. According to Young it was Aoun’s idea that they eliminate the nine-hour time difference and conduct business face to face, adding it was a great opportunity.

The trip from Lompoc began on July 15, with Young arriving in Vienna the next day. He was given lodging at a student hostel in the Afro-Asiatische Institute, a communication center for foreign students.

Young called his first time traveling overseas “an unfamiliar experience” but added, “My experience in Vienna was fantastic. The sheer amount of culture and history in such a place is truly amazing.” Young said he was fascinated by the wide array of sculptures and the architecture that filled the city.

Between work days, Young said, he found time to enjoy many forms of art. “I even had the privilege of seeing and hearing Beethoven’s 9th Symphony performed at the Vienna Film Festival,” he said, adding that he also saw the Italian opera, “Tosca.”

Elance.com, another online employment site for freelancers, reported recently that due to the slow hiring in traditional markets the number of businesses choosing online workers has increased by more than 100 percent.

Young said he relied on Google Translate and other Internet tools to bridge the language barrier while in Austria. “I learned a very small amount of German, but you don’t need a large amount to get around,” he said, adding that the locals were very helpful, cordial and polite.

Noting that all expenses, except meals, were covered by his employer, Young said he opted to save money by avoiding restaurants and preparing his own meals.

Upon his return home to Lompoc last month, Young brought with him gifts for his family and a tote bag for his mother that reads: “I Love Vienna.”

Young warned that he wouldn’t recommend this type of business transaction without the proper background checks and research. In his case, he said, he and the business owner had established a certain “level of trust (beforehand), everything checked out and seemed OK.”

Regarding an encore trip to Europe ,Young said, “I would definitely enjoy returning to Vienna at some point in my life, but I have no plans on doing so anytime soon. It was definitely a memorable and fantastic experience.”

Mask-wearing teachers and staff answered questions from parents and students and directed everyone to check their email addresses at @lompocschools.org for more information.

Lompoc Unified School District officials announced Wednesday morning that classes would remain canceled at least through the end of April. When schools were first shuttered on March 16, the closures were anticipated at that time to last at least through April 3.

Due to the lack of confirmed cases of coronavirus in the county, the Santa Barbara County Public Health Department maintains that school closures are not recommended at this time.

Hancock College student Chris Young recently traveled to Vienna, Austria, to create a website for a small business owner who found him through an online employment site.

Sculptures stand near the student hostel in Vienna where Christopher Young stayed for two months.