Many attend the vigil for Eldri Jauch at Centennial Park in Lompoc on June 15. 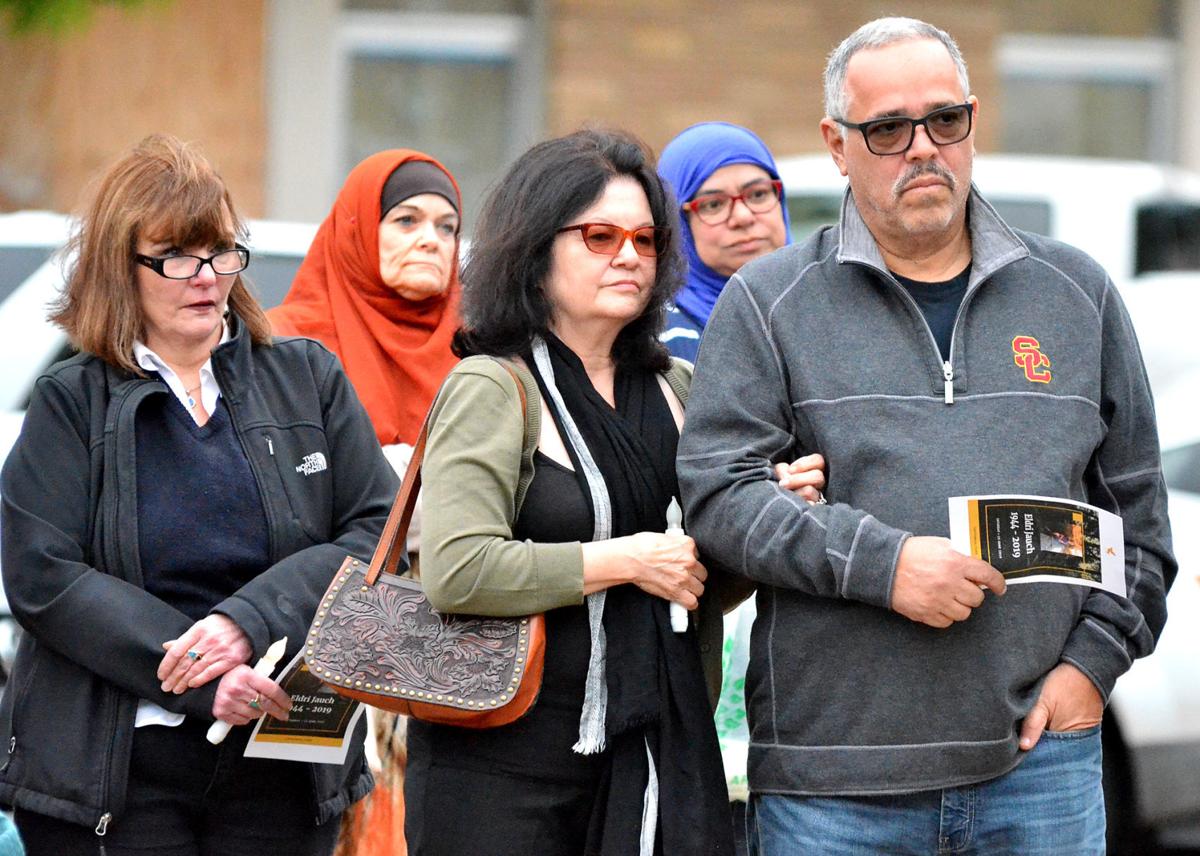 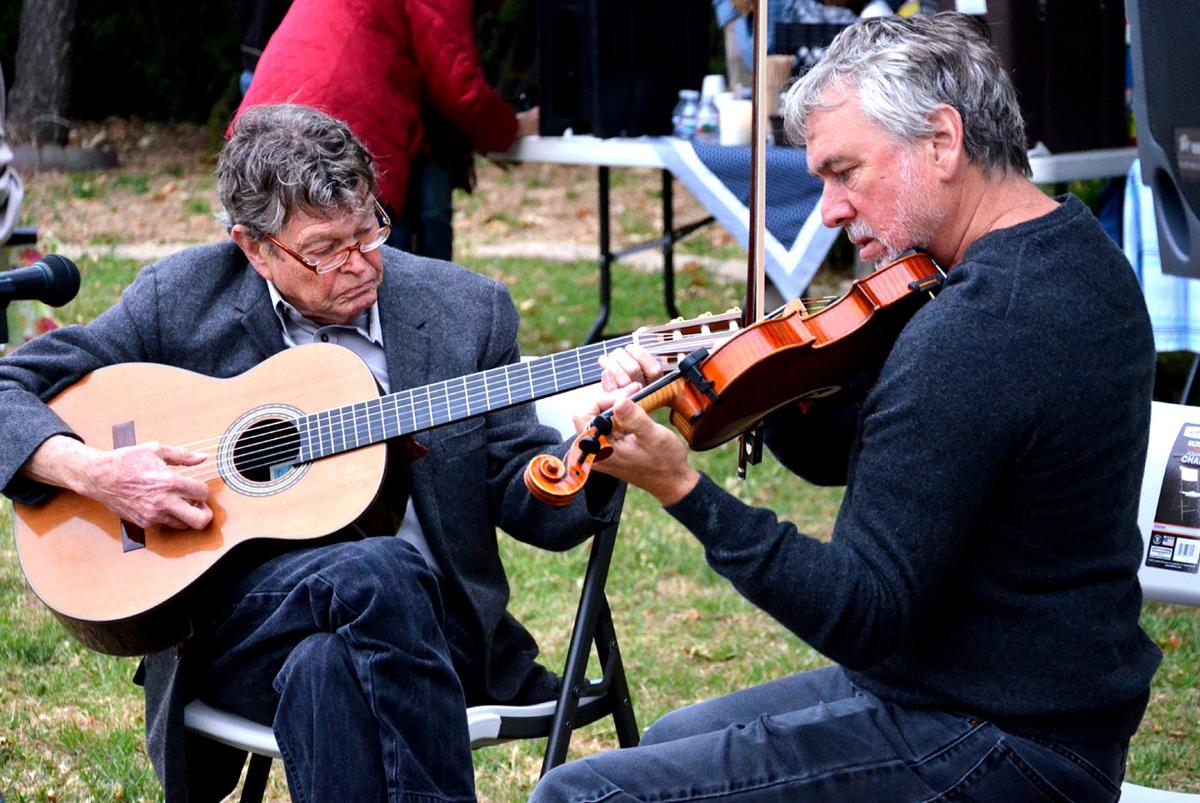 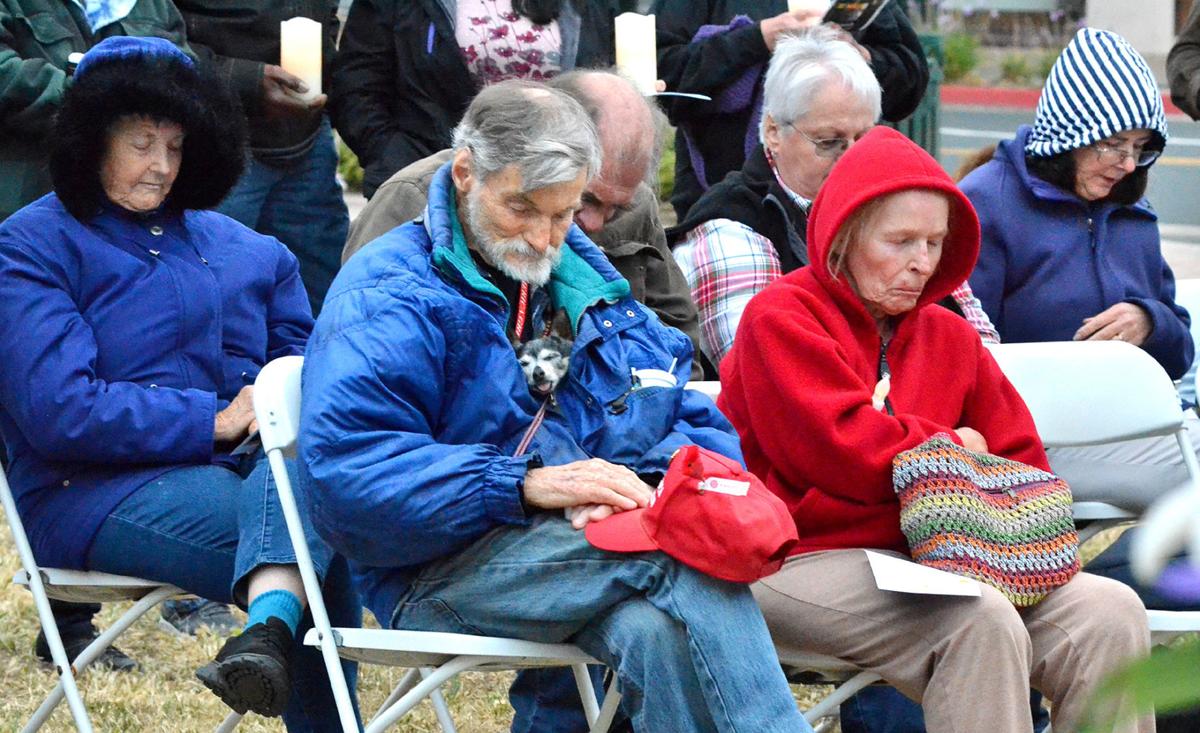 A moment of prayer for Eldri Jauch at a Centennial Park memorial vigil June 15.

The 74-year-old Lompoc woman killed earlier this month is being remembered by friends as a "free spirit" with a spark for life, and a community activist with a passion for progressive causes.

Eldri Jauch was an avid outdoorswoman known to frequent Santa Barbara County's open spaces and play the violin at the weekly farmers market. When not walking Surf Beach or hiking around the area, she spoke out against abuse, advocated on behalf of Lompoc's LGBT population and participated in interfaith initiatives in an attempt to make her community a better, more inclusive place.

Jauch was reported missing June 6 and found dead three days later in what prosecutors and law enforcement now call Lompoc's fourth homicide this year. Her neighbor, 35-year-old Melissa Martin, was arrested June 10 in Santa Ynez and subsequently charged with murder, after allegedly attacking Jauch with a baseball bat. No motive has been released.

"She had an incredible spark," said Rev. Mary Moreno Richardson, one of Jauch's friends. "She was so open to everyone [and] had this smile and twinkle in her eye."

Where the case stands

At 9 a.m. June 5, Martin allegedly threatened violence against family members via a post on her Facebook account, according to Santa Barbara County sheriff's spokeswoman Kelly Hoover. Deputies were subsequently notified of the post but later determined the family members were unharmed.

The 35-year-old Lompoc resident was arrested at a Buellton gas station the same day, suspected of vehicle theft, DUI and being under the influence of a controlled substance. Martin later posted $25,000 bail and was released on June 6. She took to Facebook on June 7, pleading for $2,000 to "raise money for some bills" and get her car out of impound.

Martin appeared in Lompoc Superior Court on June 12 but did not enter a plea. She remains in Santa Barbara County Jail on $1 million bail and is due back in court on July 2.

In 2009, Martin was sentenced to 45 days in Santa Barbara County Jail and three years formal probation after pleading no contest to a reckless driving charge that had been reduced from DUI. She pleaded no contest to use of a controlled substance three years ago.

The pair met through a mutual friend four years ago when Moreno moved to Lompoc from Santa Barbara. They became friends after Moreno, an Episcopal priest, realized they shared similar passions and had a lot in common. Their work and background — hers as a feminist theologist and Jauch's in psychology — often overlapped.

"In her passing, we have lost a dear friend to Pacifica and a champion of justice," said Dianne Travis-Teague, Pacifica's director of Alumni Relations. "Eldri was a woman of integrity and intellect, warmth and wisdom. ... [We are] eternally proud to claim her as our alumna."

Moreno called Jauch her "spiritual director" and healer, someone who helped her reexamine her relationship with love after a difficult period in her life.

"She said: 'Why analyze it? Why can't every lovely moment be special? Can't we just enjoy it for what it is?'" Moreno recalled. "It was such a new perspective [for me] and very healing."

"For all that we are — a city with a population of over 43,000 people — we are a small town," McCarty said. "When one of our own is killed in a senseless act of violence, it hurts us all."

McCarty said Jauch began to go through the center's victim advocate training program. Though she did not finish, Jauch was connected to the center through other community groups and involvements.

"She spoke up and she spoke out and I felt it was only fitting that we, an agency that actively works towards peace on many levels, used our abilities to gather people in honor of Eldri," McCarty said.

Mathew Burciaga is a Santa Maria Times reporter who covers education, agriculture and public safety. Prior to joining the Times, Mathew ran a 114-year-old community newspaper in Wyoming. He owns more than 40 pairs of crazy socks from across the globe.

Many attend the vigil for Eldri Jauch at Centennial Park in Lompoc on June 15. 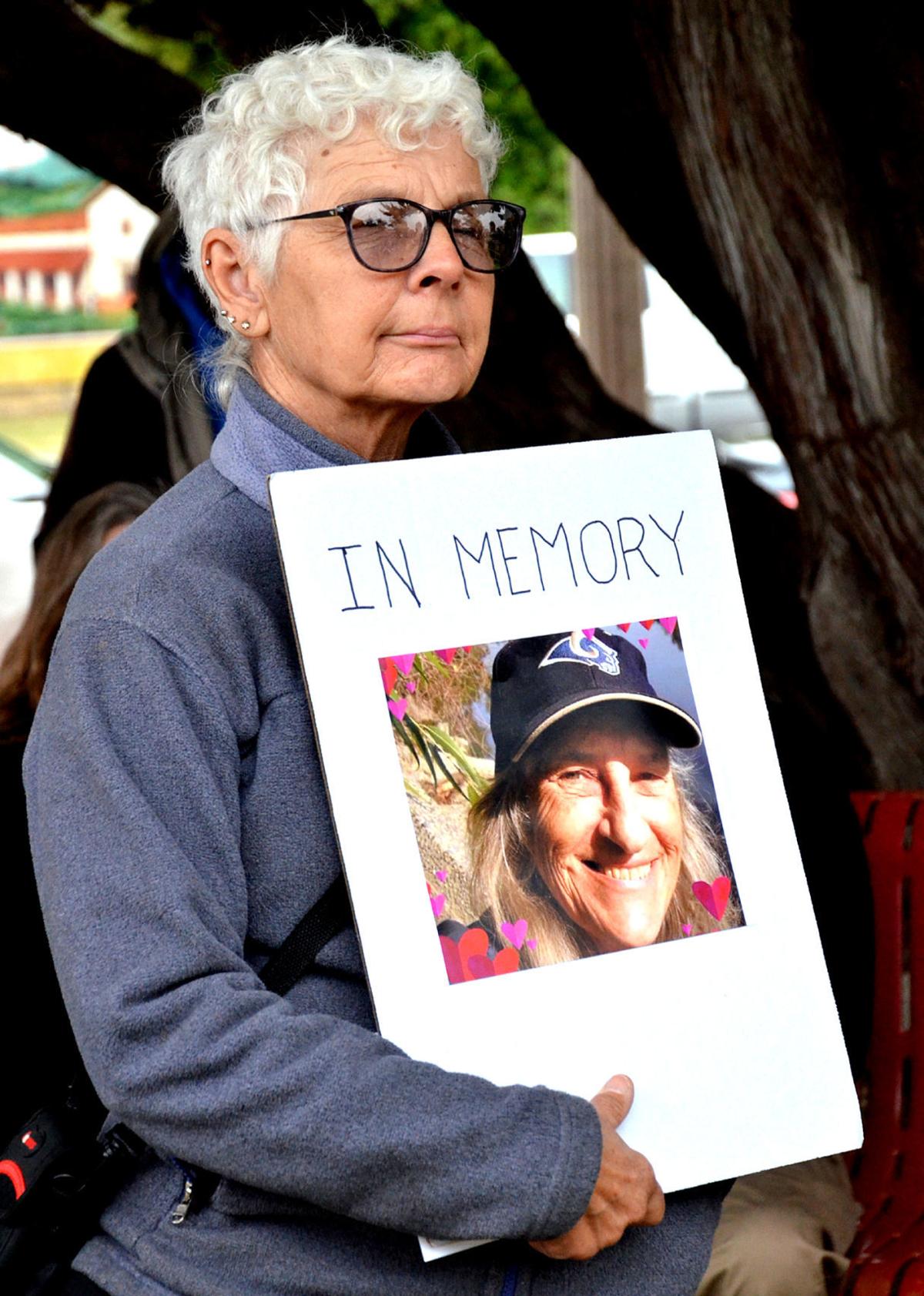 Deborah Walker holds a picture of her friend Eldri Jauch while at the vigil on June 15. 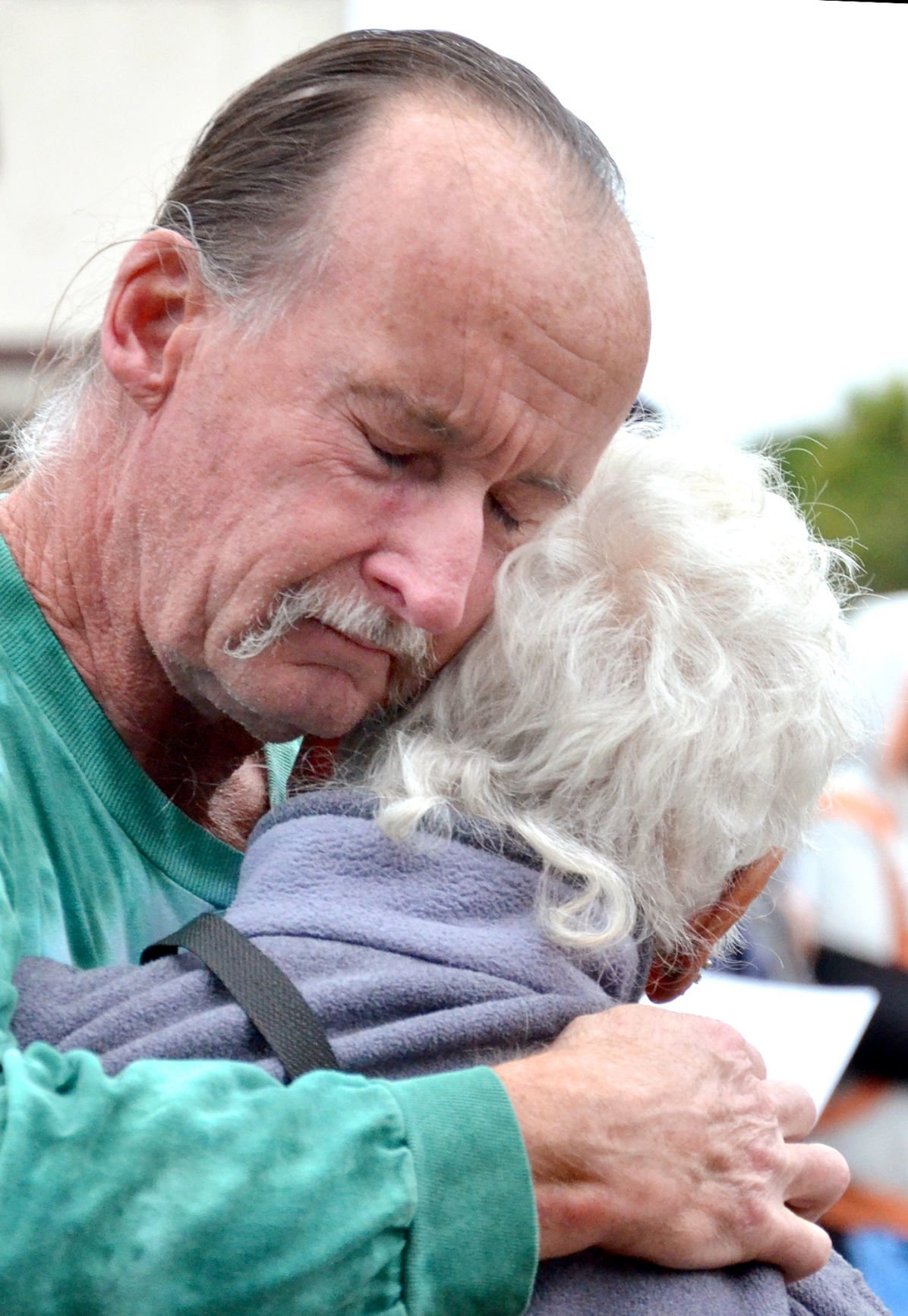 Friends of Eldri Jauch, Mark Small and Deborah Walker, hug during the June 15 candlelight vigil for Jauch at Centennial Park.

A moment of prayer for Eldri Jauch at a Centennial Park memorial vigil June 15.