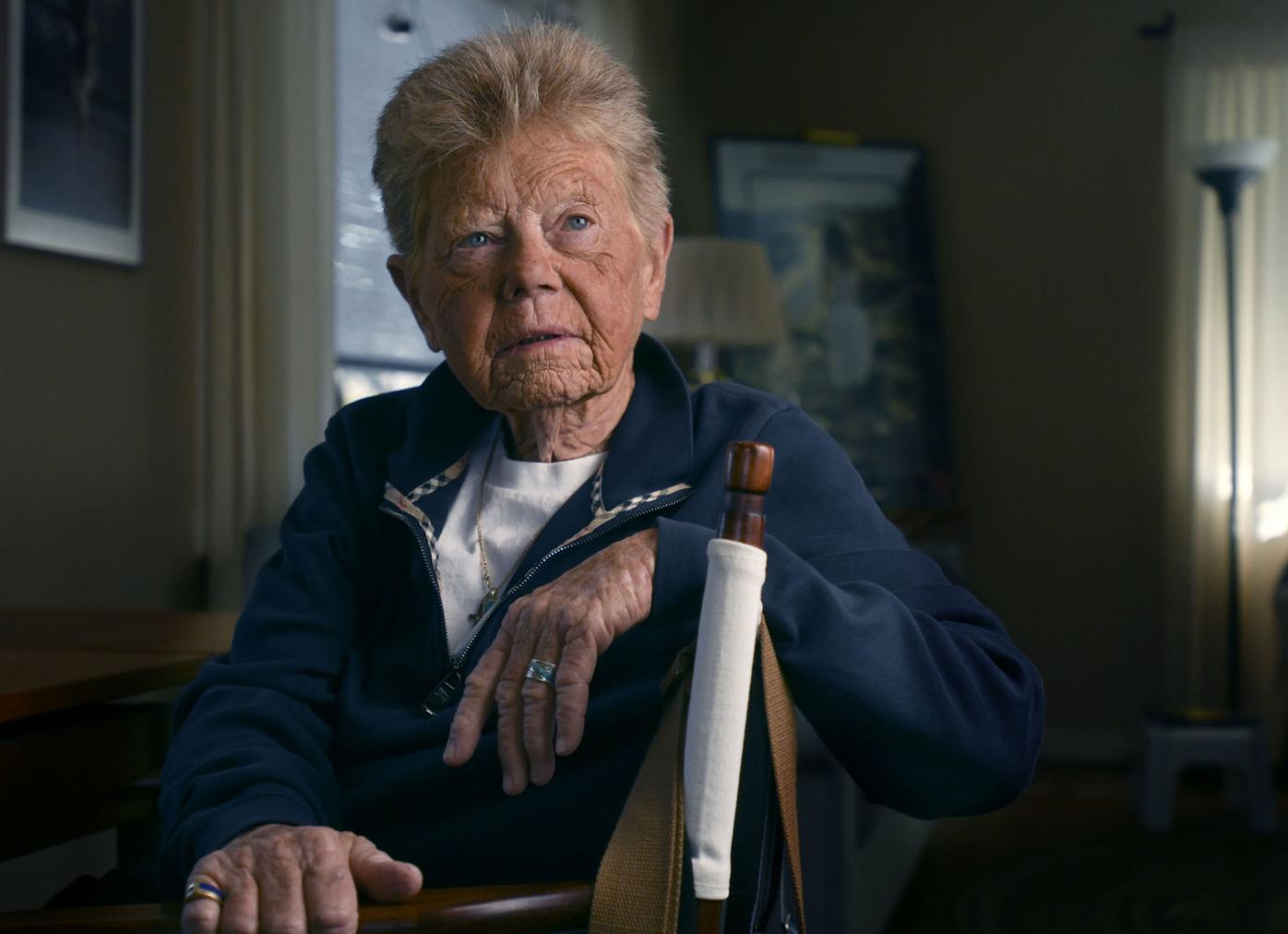 Connie Logeman is leading the charge to bring life to Casa of Hope, a safe house for victims of commercial sex trafficking. She’s working with area pastors, ministers, law enforcement and other community leaders to build the nonprofit, secure the home, and begin providing shelter and relief. 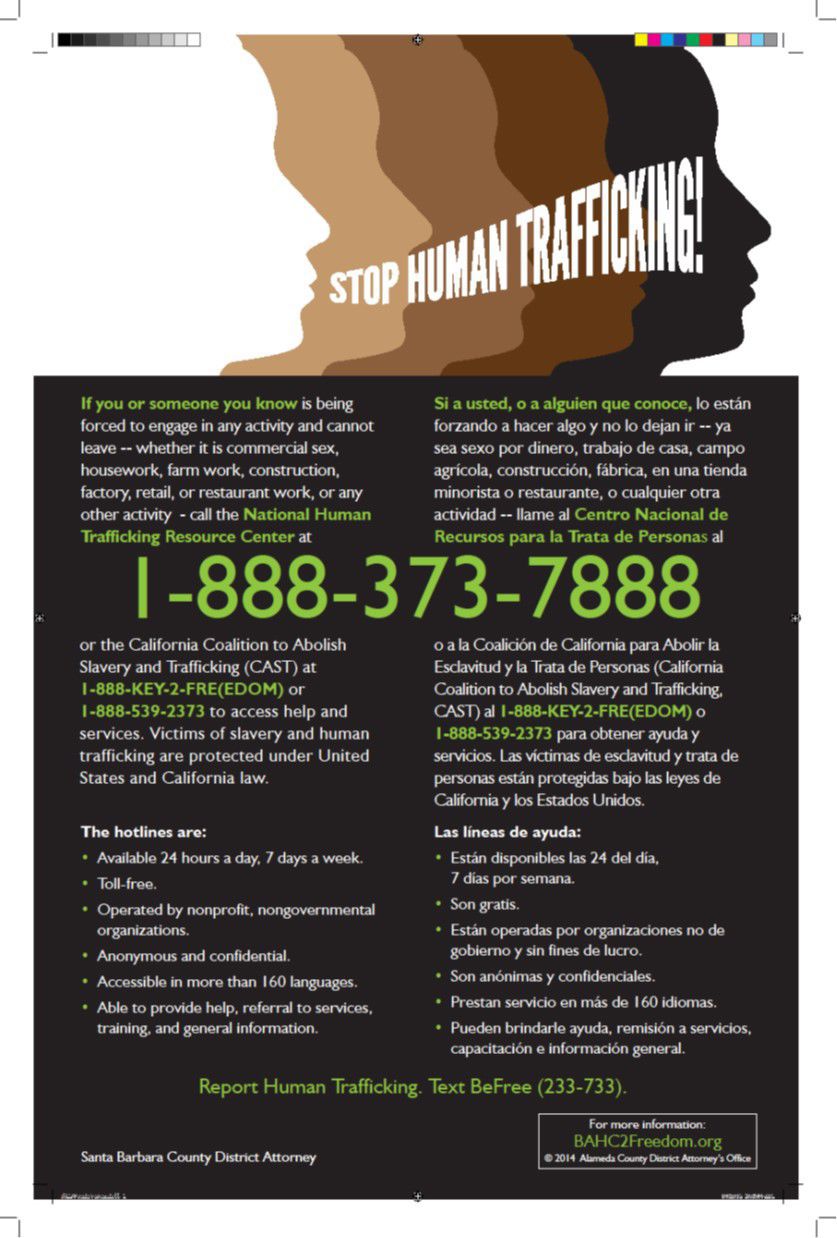 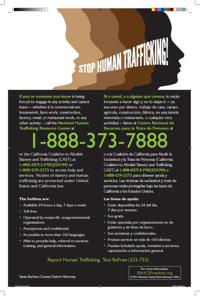 In alignment with the Senate Bill 1193, the bill required specific businesses and other establishments to post a notice informing the public and trafficking victims of telephone hotline numbers to seek help or report unlawful activity.  The Santa Barbara County District Attorney's Office said a large number of victims utilized the poster to get immediate help.

Human trafficking isn’t just happening a world away. Nearly 300,000 youth in the U.S. are at risk of being sexually exploited, and according to local law enforcement agencies, it’s increasingly discovered right here on the Central Coast.

Human trafficking is a form of slavery involving victims who are either sexually exploited or forced to provide labor. In sex trafficking, pimps lure and trap girls and boys, men and women from all walks of life into an existence of prostitution and abuse that often ends in serious trauma or death for the victims.

“In some areas of California, sex trafficking is second only to gun trafficking and drug trafficking, but guns and drugs are one-time sales. A woman can be sold over and over again. There are young girls having to service 30 or 35 men a day. It’s just horrific,” said Santa Maria Mayor Alice Patino.

California is one of the top four human trafficking destinations in the country, according to the Santa Barbara County District Attorney's Office, and the Central Coast has been identified as a natural transit corridor for trafficking activity between Los Angeles and San Francisco.

The advent of the internet paved the way for the rise in trafficking, particularly of youth who post their every feeling, activity and photo on social media for all to see.

“The whole concept of prostitution has changed a lot over the course of my career. The use of websites proliferated into the internet-based prostitution scheme that has overrun the old style of prostitution. It’s safer than walking up and down the street, more under cover,” Van Meel said.

“Traffickers target vulnerable youth. Maybe they have a poor family life where there’s drug abuse or mental health issues. It could be a wide range of problems. Predators will search social media, start reaching out with fake profiles, talking to these youths who are putting out too much personal information,” Van Meel said.

Statistically, victims of commercial sexual exploitation are likely to come from homes where they feel unsupported. Parents or guardians may serve as the traffickers, or the youth may flee the home only to fall into the clutches of other adults who exploit them.

A 2015 needs assessment highlighted 45 confirmed child survivors of sex trafficking in Santa Barbara County between 2012 and 2014. The numbers are possibly higher given that victims often live in fear for their lives, the lives of family members, or don’t understand their role as victims in unhealthy relationships, Patino and Van Meel said.

“Within 48 hours of a youth running away, a trafficker will approach them. Where are they going, sleeping, eating? There’s always a trafficker there willing to exploit those needs to get something in return,” Velasco said.

Eventually, the traffickers lure their victims into a meeting, then romance them into the trafficking lifestyle.

“They’re meeting people who are older and they think there’s something there that’s love or a relationship, and that’s not the case. Exploiters know how to groom, what to say, how to pick vulnerable individuals to go after. We see it in adult victims as well. It’s a cycle of dependency. They’re looking for that affection and love,” Velasco said.

There is apparently no lower age limit for child sexual exploitation. Van Meel said it’s not unusual to find preteens targeted, and he’s seen children as young as 8 exploited.

“It’s less likely to happen to people who feel supported. It takes a community, everything in their lives, creating stability. When you can’t put that support into play, now we’re working against a pattern of conduct, severe disfunction, severe emotional fallout. It’s a very complicated thing to deal with,” Van Meel said.

“We see juveniles who were once trafficked becoming adults and beginning to work as pimps for their pimps,” Van Meel said.

It’s a cycle that tugs at Connie Logeman’s heart. The Orcutt retiree is working with city and county officials, members of the faith community, concerned citizens and volunteers to develop Casa of Hope, a nonprofit safe house where sex trafficking victims can heal, grow and begin forging a new path in life.

“I don’t think any child, any person, should have to go through that. I cannot tolerate, can’t get my head around, abuse of any kind, but when you take children and pimp them out, how do you process that? How do you look at these guys? Where did that come from? What happened to them that they would treat other people this way,” Logeman said.

Emergency shelters are already in place throughout the Santa Maria Valley. Hope Refuge Inc., a Santa Barbara County-based nonprofit, has worked since 2013 to develop a full-time, short-term residential therapeutic program for 12- to 17-year-old girls who have been trafficked for sex. Junior League of Santa Barbara is in the final stages of opening a home for youth.

“Housing is one of the biggest issues we’re tackling. We’re looking at the long-term housing needs, things that are beyond shelter and emergency services,” Velasco said.

In 2013, the District Attorney’s Office established the Human Trafficking Task Force, and in 2016, the DA and Sheriff’s Office joined forces to secure a $1.34 million endowment to step up their efforts. Called the Enhanced Collaborative Model to Combat Human Trafficking grant, it's administered by the U.S. Department of Justice, Office of Justice Programs.

The three-year grant is divided by the two agencies -- $740,737 to the Sheriff’s Office and $600,000 to the District Attorney’s Victim-Witness Assistance Program.

“Because it’s such a widespread problem, it takes a widespread collaborative community to address it,” Velasco said.

Logan B. Anderson contributed to this report.

A consortium of concerned citizens, faith leaders and volunteers have established a nonprofi…

Yleana Velasco, victim advocate with the Santa Barbara County District Attorney’s Office, said prevention is the key to reducing human trafficking. Capturing those who would prey upon youth, either in buying or selling them as sex objects addresses one aspect, but there’s more to the story.

“People have this notion that people get kidnapped and taken to another country. That’s not the case. It’s local kids involved, adults who were involved as kids,” Velasco said.

Monitoring children’s social media accounts, educating them about privacy and checking their privacy settings are all good steps.

“Make sure kids aren’t naive to the fact that there are predators out there. Just because people are requesting to be their friends, that isn’t their true intention,” Velasco said.

Adult mentors can also provide support where families may not.

“One of the things you hear from a lot of survivors is, ‘If someone would have just told me I mattered, would have looked at me, it would have made a difference.’ Being involved in Court-Appointed Special Advocates, Big Brothers/Big Sisters, fostering kids, these are things we, as a community, can do to provide that support,” Velasco said.

Santa Maria Police Lt. Paul Van Meel said getting out of the sex trade is incredibly difficult, but victims need to know there are people ready and willing to help them.

“Go to anyone you trust — your family, law enforcement, a rape crisis hotline, 911, anyone you can talk to about these sensitive activities,” Van Meel said.

Too often, even when law enforcement tries to intervene, victims won’t take hold of the lifeline tossed to them.

“Even though they’re in a negative, abusive situation, they’re finding something that keeps them steady and attracted to it, but it’s not healthy,” Van Meel said.

24-hour confidential crisis intervention hotline for youth and their families.

Report suspected child exploitation or missing children 24 hours a day by phone or online at https://report.cybertip.org

"Human trafficking is an issue anywhere with a freeway and motels."