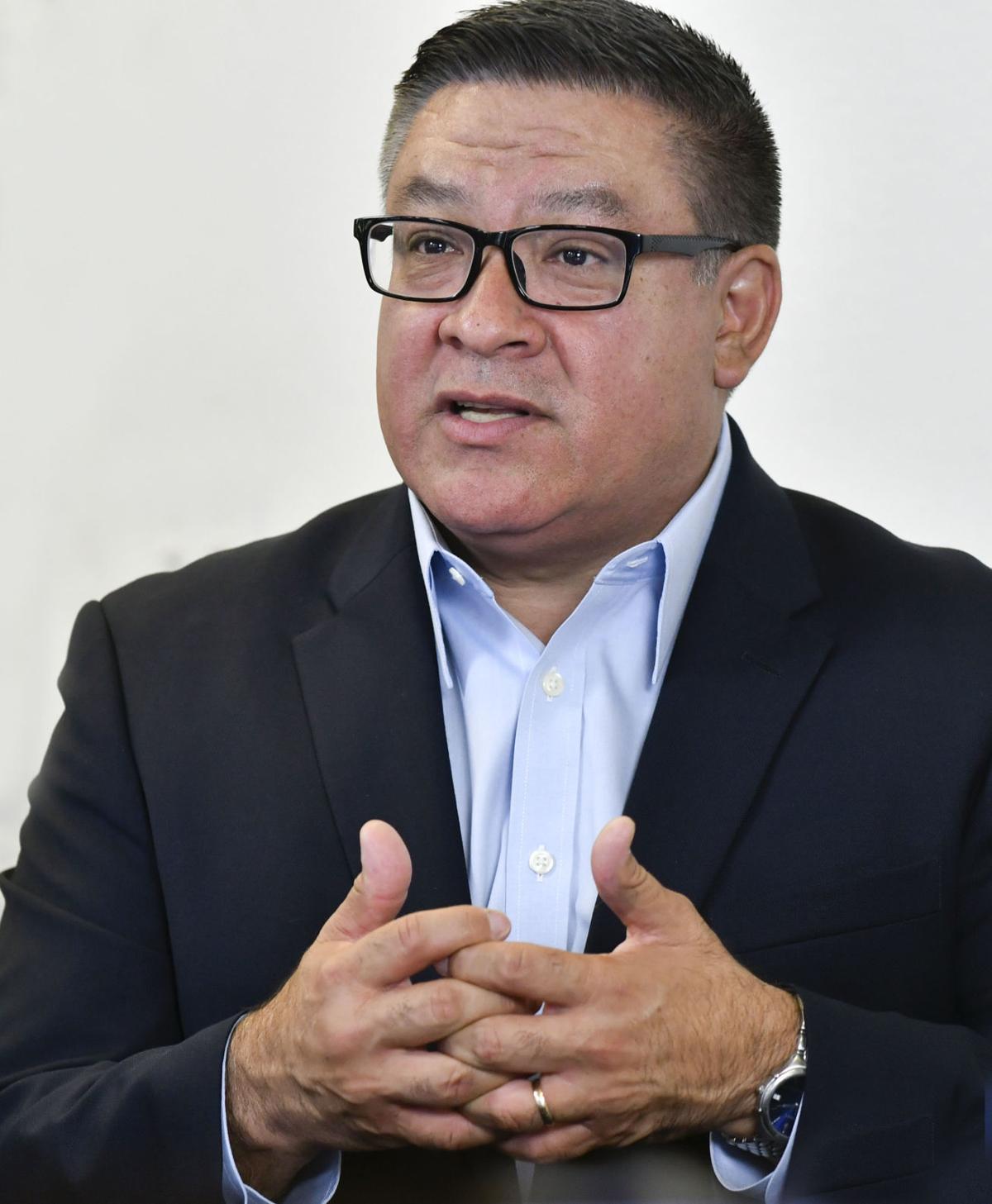 Congressman Salud Carbajal, who is running for reelection to his 24th District seat, answers questions during an interview at the Santa Maria Times. 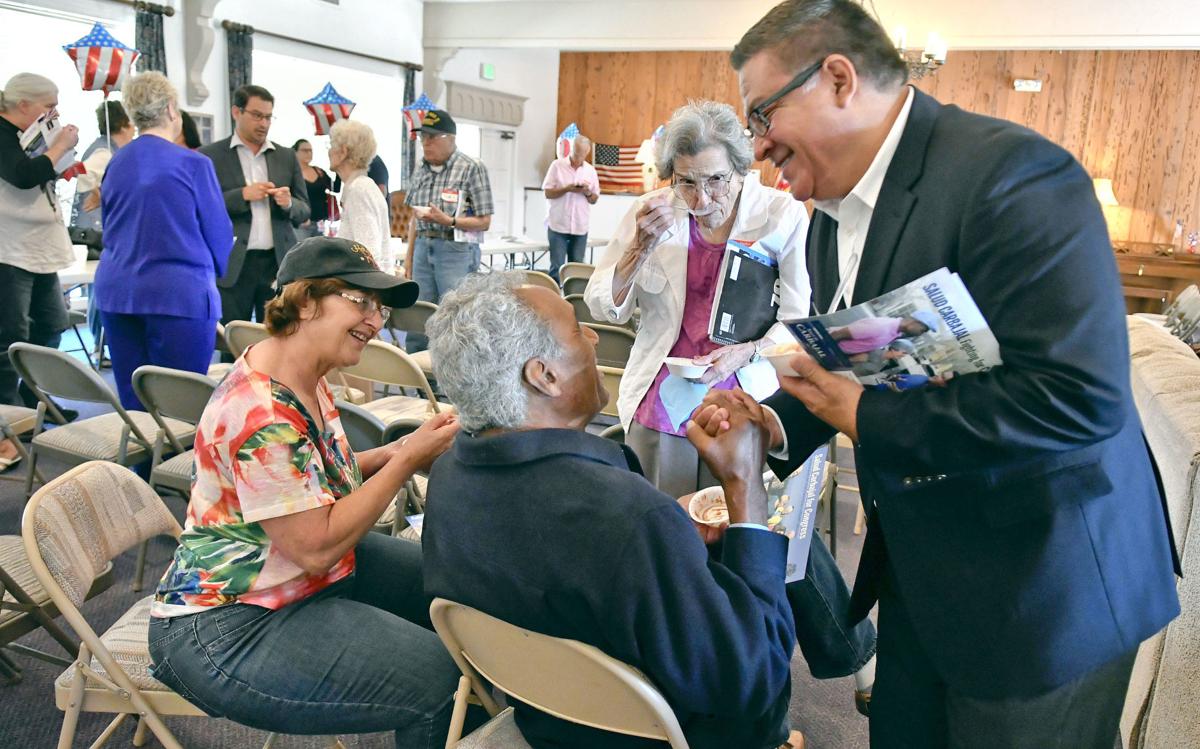 Incumbent 24th District Congressman Salud Carbajal, a veteran in both politics and the military who sat on the Santa Barbara County Board of Supervisors for over a decade, is campaigning to keep his seat on a platform of working across the aisle for civil rights, immigration reform and job creation.

Carbajal, 53, is wrapping up his first term representing the district, which covers part of Ventura County, and all of Santa Barbara and San Luis Obispo counties.

The last 18 months have been an extraordinary experience, he said during an interview with the Santa Maria Times. "There was a lot of learning involved," he said, "and also, opportunities to work together across the aisle despite the gridlock."

Carbajal said he hopes voters will send him back to Washington on Nov. 6 so he can use what he's learned during his freshman term, especially in the area of bipartisanship.

Born in Moroleon, Mexico, in 1964, Carbajal immigrated with his family to Arizona, then later moved to Oxnard where his father was a farmworker. Carbajal served in the U.S. Marine Corps Reserve for eight years and later attended the University of California, Santa Barbara.

Salud Carbajal: You have touted your bipartisan qualities, has that changed with your first term?

He was elected to represent the 1st District on the county Board of Supervisors in 2004 and was re-elected in 2008 and 2012. Following Congresswoman Lois Capps' retirement, Carbajal in 2015 announced his plans to run for her seat representing the 24th District.

Carbajal emerged as the Democrat frontrunner in the 2016 primary, closely followed by Republican challenger Justin Fareed. Carbajal later defeated Fareed in the Nov. 8 election and assumed office on Jan. 3, 2017.

He hit the ground running as a freshman Congressman and introduced his first resolution, HR 731, the California Clean Coast Act, three weeks after taking office. The resolution prohibits oil drilling off the state's coast.

Salud Carbajal: What is your focus? Budget hawk, foreign policy wonk, or something else?

He joined several caucuses and committees, including the Committee on Armed Services, the Sustainable Energy and Environment Coalition and the Problem Solvers Caucus.

Carbajal says he's kept his promise to reach across the aisle during a time of hyper-partisan politics. Looking back on his voting record, sponsorships and co-sponsorships of various legislation, he notes that out of the 300 bills he's been involved in over half of them are bipartisan. "I'm proud of that," he said.

Working together develops civility and a desire to get what the public needs done, Carbajal said, promising to continue his efforts if re-elected.

Carbajal also helped secure $2.4 billion in federal funds for fire disaster relief to give to the U.S. Forest Service to combat future fires, along with acquiring 20 Black Hawk helicopters for the state's National Guard.

Carbajal acknowledges that while it's challenging at times to find common ground, he has been successful, he said, in areas of infrastructure projects and health care. "Again, it's a long journey to achieve bipartisanship [in all areas] but it's something I'm committed to," he said.

He voted against repealing the Affordable Care Act, he said, because it would have increased health-care costs and taken away insurance coverage from over 27,000 Central Coast residents.

With the Problem Solvers Caucus, he helped craft bipartisan legislation to stabilize insurance markets, lower prescription drug costs and co-sponsored legislation to create a public option under the Affordable Care Act to provide competition with private industries to bring down insurance costs.

Salud Cabajal: How would you achieve immigration reform during Trump administration?

Carbajal advocates for comprehensive immigration reform and maintains that the system should be modeled after the 2013 bipartisan bill, Border Security, Economic Opportunity, and Immigration Modernization Act (S. 744). The bill makes it possible for undocumented immigrants to gain legal status and eventually citizenship, but increases security by adding up to 40,000 border patrol agents.

Carbajal said he's not in favor of building a wall, or abolishing ICE, but wants to pursue reconnaissance technology and resource management as a way to secure the border. He believes the current White House administration authorizes policies that separate children from families, or going after innocent people rather than undocumented immigrants that commit serious crimes.

When the Thomas fire and Montecito mudslides devastated the Central Coast, Carbajal voted "yes" on HR 195, a spending bill which would fund the government until Feb. 8 this year.

Salud Carbajal: Would you support replacing ACA with a "Medicare For All" plan?

The bill failed in the Senate, which subsequently led to a government shut down for three days in January. Carbajal was one of eight Democrats to vote to keep the government open, explaining that his vote was to ensure the government stayed open during a time when the Central Coast needed resource assistance for disaster relief and recovery.

Whether the funds came from FEMA, the military or elsewhere, "I felt it was important to not get caught up in the politics but rather to vote to ensure our government stayed open," to bring aid to affected residents and emergency responders.

"When we have a disaster, our government shouldn't play politics," Carbajal said, adding that the experience "actually showed ... that we can work together for the well-being of our residents."

Carbajal maintains that he's "not soft on crime" despite criticism from his challenger, and his "no" votes on Kate's Law, which raised the penalties for undocumented immigrants who re-enter the United States after being deported, and the No Sanctuary for Criminals Act.

Carbajal said he voted against Kate's Law because "what that law did was also criminalize those seeking asylum in this country and victims of sex trafficking."

He proposed an amendment to modify the law, which wasn't accepted, Carbajal said. While backing strong penalties for undocumented immigrants that commit serious crimes, "I'm not about supporting legislation that goes too far" and criminalizes innocent people, he said.

Carbajal points to his approval to fund the Northern Branch Jail in Santa Maria as a supervisor as an example of his commitment to public safety, and touts his endorsements from Santa Barbara County District Attorney Joyce Dudley, and the Peace Officers Research Association, the state's largest law enforcement association.

Be it job creation, especially during the closure of the Diablo Canyon power plant, standing for immigration reform, fighting climate change, addressing water security during the region's historic drought or making health care more affordable, Carbajal pledged to continue representing the best interests of the 24th District in Washington.

"I think my record speaks for itself -- I've been working hard the past 18 months to implement solutions to those priorities and challenges we face here in [the region,]" he said. "When you compare both my opponent and myself, I think it becomes quite clear who is best to represent the Central Coast in Washington."

Call it a comeback — UCLA alum, third-generation cattle rancher and Republican candidate for the 24th Congressional District Justin Fareed is …

Congressman Salud Carbajal met with students and staff at Cabrillo High School on Tuesday afternoon, less than two weeks after taking part in …

The second of four forums planned over the next month, also co-sponsored by the Santa Ynez Valley News, will be for Buellton City Council cand…

Congressman Salud Carbajal, who is running for reelection to his 24th District seat, answers questions during an interview at the Santa Maria Times.