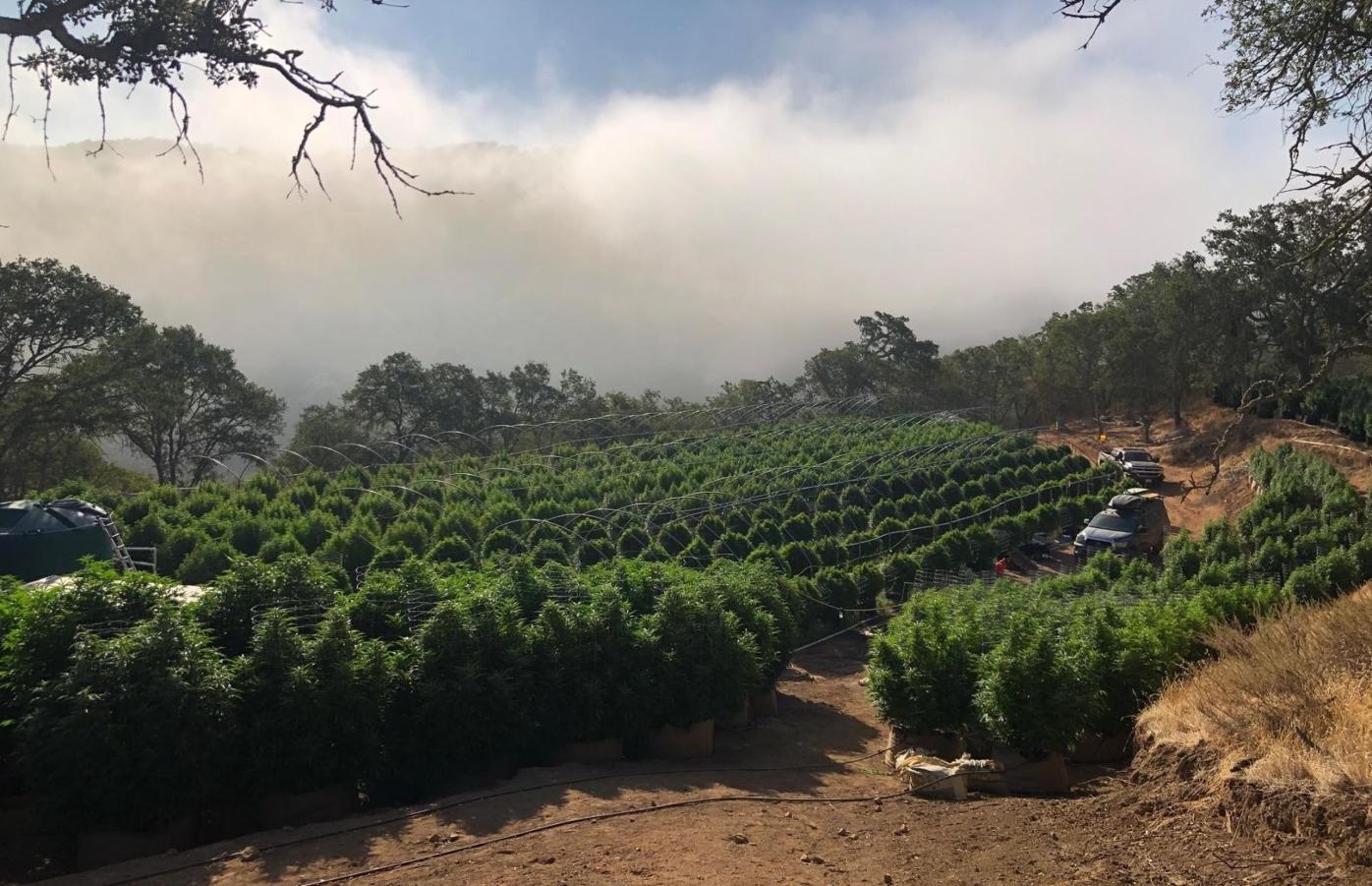 An illegal cannabis cultivation site was shut down in July in Tepusquet Canyon, one of the existing developed rural neighborhoods where the Santa Barbara County Board of Supervisors that same month banned cultivation through an ordinance amendment. Nine of the 12 cannabis operations in EDRNs have ceased operations, a county report said.

A graph from a report on cannabis taxes in Santa Barbara County compares the increasing revenues by quarter from the 2018-19 fiscal year through the first quarter of the 2020-21 fiscal year, shown in yellow.

A pie chart from a report on cannabis in Santa Barbara County shows the regions where the 1,316 state-licensed cannabis operations are located. 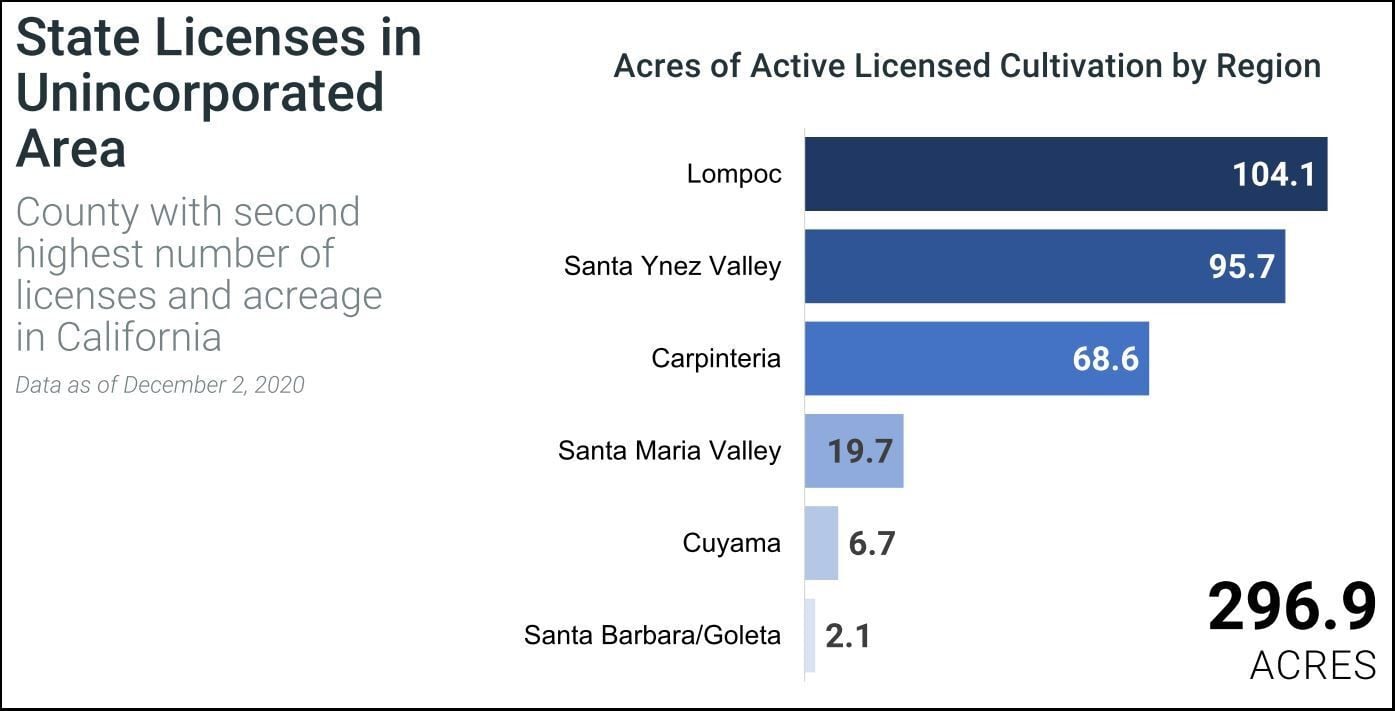 A bar graph from a report on cannabis in Santa Barbara County shows the regions where the 296.9 acres of state-licensed cannabis cultivation is located.

The county is reviewing 23 applications for retail storefront licenses from six community plan areas, and nine of the 12 cultivators that were operating in existing developed rural neighborhoods have shut down after supervisors approved an ordinance amendment banning them from those areas, according to the report.

Enforcement operations are eliminating the large illegal cultivation operations, the report said, but more needs to be done to address small illegal operations.

Those were just some of the highlights in the first-quarter report on cannabis taxes, compliance and enforcement.

The $4.2 million in tax revenues came from 54 of the county’s 121 operators who reported gross receipts for the quarter, county fiscal policy analyst Steven Yee said. Another 38 reported zero receipts and 29 failed to file reports.

Assistant County Executive Officer Barney Melekian said there are a number of reasons for reporting no income, including being a nursery operation or between growing cycles, having no activity or terminating operations.

Taxes received from cannabis operations have increased every quarter since the first quarter of 2018-19, and officials have said they are now one of the county’s top four sources of discretionary revenue.

Cannabis tax revenues could increase by an estimated $650,000 after up to six retail storefront operations are phased in, with that figure projected to rise to $1.5 million over the next five years.

Cannabis cultivation in existing developed rural neighborhoods, or EDRNs, odor from cultivation operations and retail cannabis stores in community plan areas have been the focus of most complaints from residents and concern for supervisors.

The board responded in July by amending the Land Use and Development Code to ban cultivation in EDRNs, which would force 12 operations to shut down and reduce the cultivated area by as much as 25,047 acres.

Melekian said of the 12 operators, nine have ceased cultivation and one has filed a lawsuit against the county.

He noted the four-month grace period ended Dec. 14, so the cannabis compliance team would begin site inspections this week.

Third District Supervisor Joan Hartmann said odor complaint forms require the parcel number for the property that’s producing the skunky odor, which she said is extremely difficult for the public to obtain.

She said she believes that leads to residents not filing complaints, which is one reason some existing cultivation operations say they’ve had no complaints when they file for land use permits.

Planning and Development Department Director Lisa Plowman said they encourage the public to file complaints and do the best they can to identify the location generating the odor.

“That way we can at least track that we’re getting complaints,” Plowman said.

During the first quarter, her department responded to eight odor complaints in the North County.

Enforcement of county cannabis ordinances and the elimination of illegal operations have been concerns for supervisors, and it appears the Sheriff’s Office focus on the black market is paying off in shutting down the large illegal grows resulting from fraudulent applications.

However, the report noted more needs to be done to address the smaller illegal operations.

“I do think that it’s vital that oversight and enforcement continue to be a growing part of this business,” 1st District Supervisor Das Williams said.

Evidence of the effectiveness of the existing enforcement program may be visible in the falling statistics.

In the first quarter of the previous fiscal year, 12 enforcement operations resulted in the seizure of 16,684 plants valued at $4.2 million and 1,157 pounds of dried products valued at $1.2 million.

This fiscal year, only five enforcement operations were conducted in the first quarter, leading to the seizure of just 7,220 plants valued at $3.6 million and 250 pounds of dried products valued at $250,000.

The Agricultural Commissioner’s Office investigated one complaint involving pesticide use violations at a cultivation operation in Los Alamos, where workers and safety violations were also discovered.

While the investigation is continuing, the grower is working with the Ag Commissioner’s Office to resolve the violations.

As of Dec. 2, Santa Barbara County was still second only to Humboldt County in the number of state licenses and state-licensed acreage under cultivation.

Of the 926.9 acres under state-licensed cultivation, the Lompoc area again leads the way with 104.1 acres, followed by Santa Ynez Valley with 95.7, Carpinteria with 68.6, Santa Maria Valley with 19.7, Cuyama with 6.7 and the Santa Barbara and Goleta area with 2.1 acres.

However, the county has issued notices of noncompliance with the intent of withdrawing authorization for five state license renewals.

Within 60 days, 35 state licenses will expire, and officials are reviewing those to see if the county should continue supporting them.

California cannabis by the numbers

While statewide cannabis statistics have yet to be compiled for 2020, the following numbers were reported by CalCannabis for 2019:

5,500 — By California Department of Food and Agriculture

5 — Counties with the most cannabis cultivation licenses

Despite economic challenges posed by the ongoing health crisis, city taxes incurred by Lompoc's open-market cannabis industry — which go into the city's general fund that primarily funds police and fire — added a total of $983,000 in revenue in 2020, $533, 513 more than initial projections.