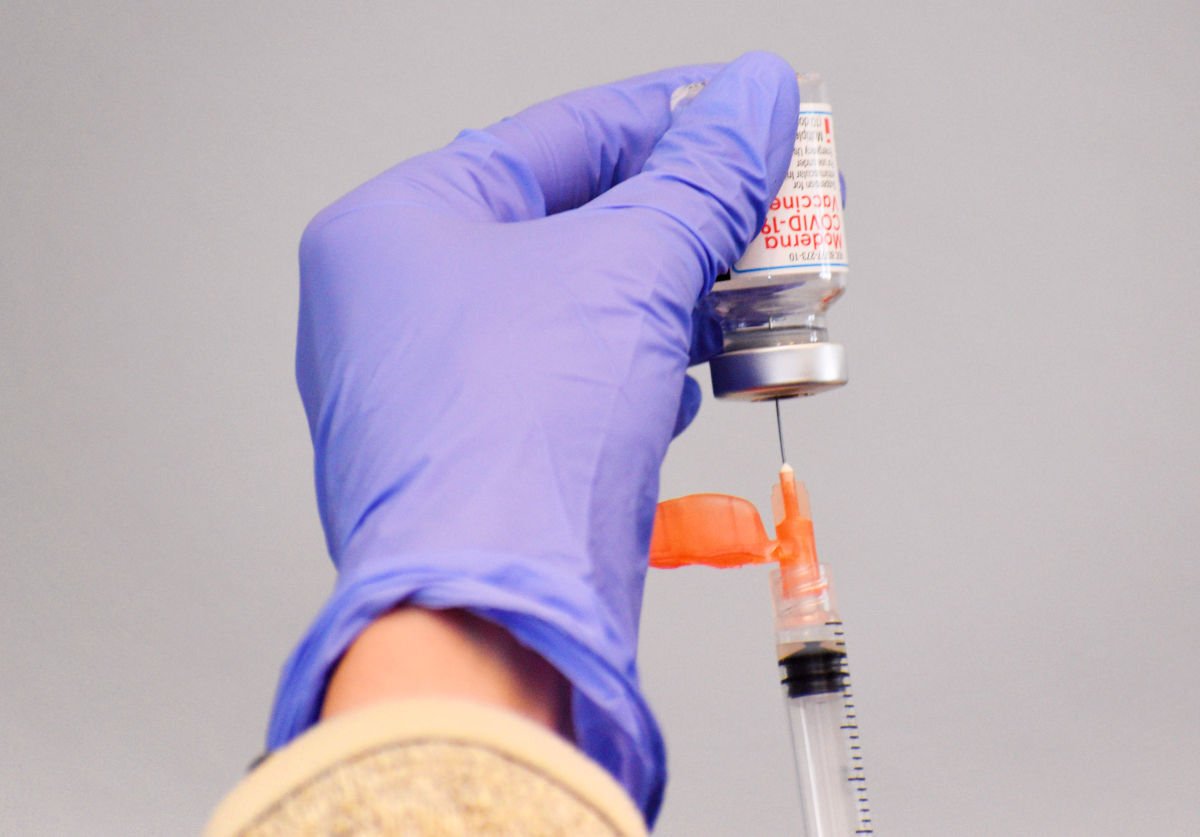 A Santa Barbara County public health official fills a dose of the Moderna vaccine at a recent mobile clinic in Santa Maria. County employees will be required to show proof of vaccination or submit to weekly testing under a new policy adopted by the Board of Supervisors. 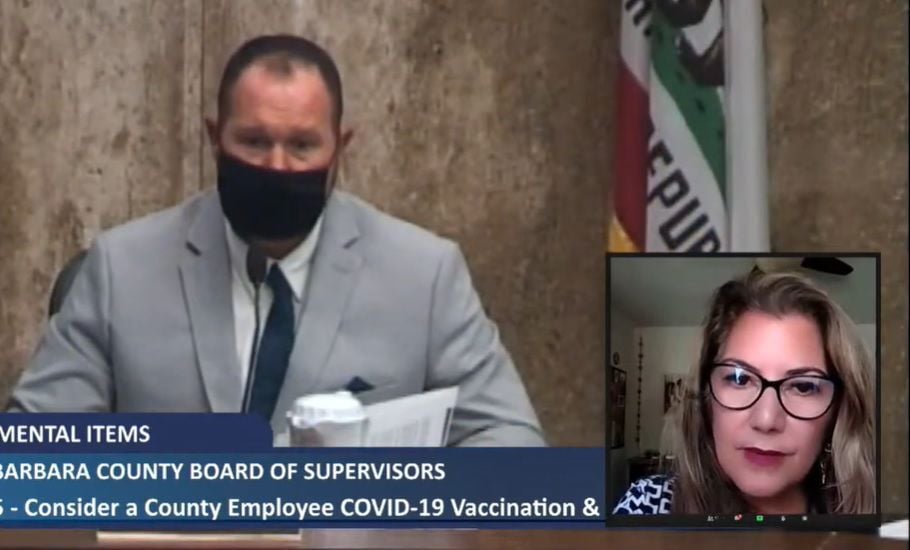 Maria Elena De Guevara, inset, director of the Santa Barbara County Human Resources Department, responds to a question from Board of Supervisors Chairman and 4th District Supervisor Bob Nelson in this screen capture from the livestream of the Aug. 31 board meeting.

A Santa Barbara County public health official fills a dose of the Moderna vaccine at a recent mobile clinic in Santa Maria. County employees will be required to show proof of vaccination or submit to weekly testing under a new policy adopted by the Board of Supervisors.

Maria Elena De Guevara, inset, director of the Santa Barbara County Human Resources Department, responds to a question from Board of Supervisors Chairman and 4th District Supervisor Bob Nelson in this screen capture from the livestream of the Aug. 31 board meeting.

After more than two hours of public testimony last week, the Santa Barbara County Board of Supervisors adopted a policy requiring county employees to show proof of COVID-19 vaccination or submit to weekly testing.

Board Chairman and 4th District Supervisor Bob Nelson dissented in the 4-1 vote Aug. 31, saying he believes the policy is a part of “pushing toward mandates.”

“I do believe vaccines have been wildly successful in preventing hospitalizations and death,” Nelson said.

But referring to court decisions stretching back more than 100 years that said governments have the right to set health mandates, he added, “Just because it can be done doesn’t mean it should be done.”

Maria Elena De Guevara, director of the Human Resources Department, said the policy will apply to all county workers, including those working remotely, who don’t fall under other state health orders or departmental-specific policies.

That includes regular staff, extra help, contractors on the payroll, interns, volunteers, and all others performing services on-site and interacting with the public.

Those who opt not to vaccinate or supply verification will be tested once a week using a self-administered PCR nasal swab at a county site and will be notified of results within 24 hours.

All positive tests will be reported to the Human Resources Department, which will notify affected departments. The employee then will be required to quarantine.

The deadline for compliance is Sept. 30, or shortly thereafter, because the county must still meet and confer on the policy’s impacts with 10 employee bargaining groups, secure contracts, purchase equipment and provide training.

“So there are still lots of logisticals that need to be set in place and organized,” De Guevara said.

Supervisors heard public testimony from 50 people, some who represented nonprofit organizations and others who are county employees, doctors, registered nurses, a sheriff’s deputy, a veterinarian, a sociology professor, an epidemiologist and a retired environmental health specialist.

Of those who spoke, 33 opposed the policy based on what they said are false and misleading data, a lack of consensus among scientists, the failure of the vaccines to halt the virus while causing more health problems, false results from PCR tests and its violation of U.S. code and the Constitution, among other reasons.

Only 17 spoke in support of the policy, citing the need to protect vulnerable populations and to keep county services flowing, statistics showing the vaccine is safe and reduces the severity of the disease, and personal experience with vaccinated and unvaccinated relatives who contracted the virus.

Second District Supervisor Gregg Hart, who proposed the policy, noted “many provocative ideas” were brought up in public comment, but he focused on only two during the board’s deliberations.

The first was that the vaccine doesn’t prevent the disease or its transmission but only lessens the symptoms, so why bother to vaccinate?

“Well, that’s exactly the point,” Hart said. “Vaccines keep infected people from dying. They reduce the severity of the disease, which reduces the number of people who end up hospitalized under the care of our severely strained health-care professionals who are working diligently to protect us.”

The second point was the fear that the policy was going down the path to destroying personal freedoms, but he said that path was started 116 years ago when the U.S. Supreme Court said states could mandate smallpox vaccinations.

“This legal authority is the very foundation of public health in this country,” Hart said.

“Our job is to protect the vulnerable in our community,” she said.

First District Supervisor Das Williams said every county employee signed up to serve the public, and in a major disaster would be an emergency worker in direct contact with the public.

“I just think it’s imperative to get a higher level of vaccination … for us to be in a safer place as a society,” Williams said.

Fifth District Supervisor Steve Lavagnino noted he has been critical of the Public Health Department in the past.

“I believe the vaccine is saving lives; I believe it is protecting the elderly; I believe it is reducing serious illness and hospitalizations,” Lavagnino said. “But I also don’t believe anybody should be forced to take it. …

“I believe in its efficacy, but if you don’t and you’re scared of it, I can’t think of anything worse than to be told you have to take something that you’re just not comfortable with,” he continued.

“The good thing is, that’s not what the county is doing. This is not a vaccine mandate at all. You’re not losing your job if you don’t take the shot. You have a very simple out.”

When a policy requiring Santa Barbara County employees to be vaccinated or tested weekly was proposed at the Board of Supervisors meeting Aug. 24, some board members wanted to know the current vaccination status of the workforce before considering such a policy.

As of the close of business Monday, 59% of Santa Barbara County’s 4,610 employees were verified as vaccinated against COVID-19, with another 10.6% attesting to being vaccinated, according to Maria Elena De Guevara, director of the Human Resources Department.

The status of another 34.4% was unknown because the workers had not disclosed their status, and 175 employees could not be contacted because they were on a leave of absence, De Guevara said.