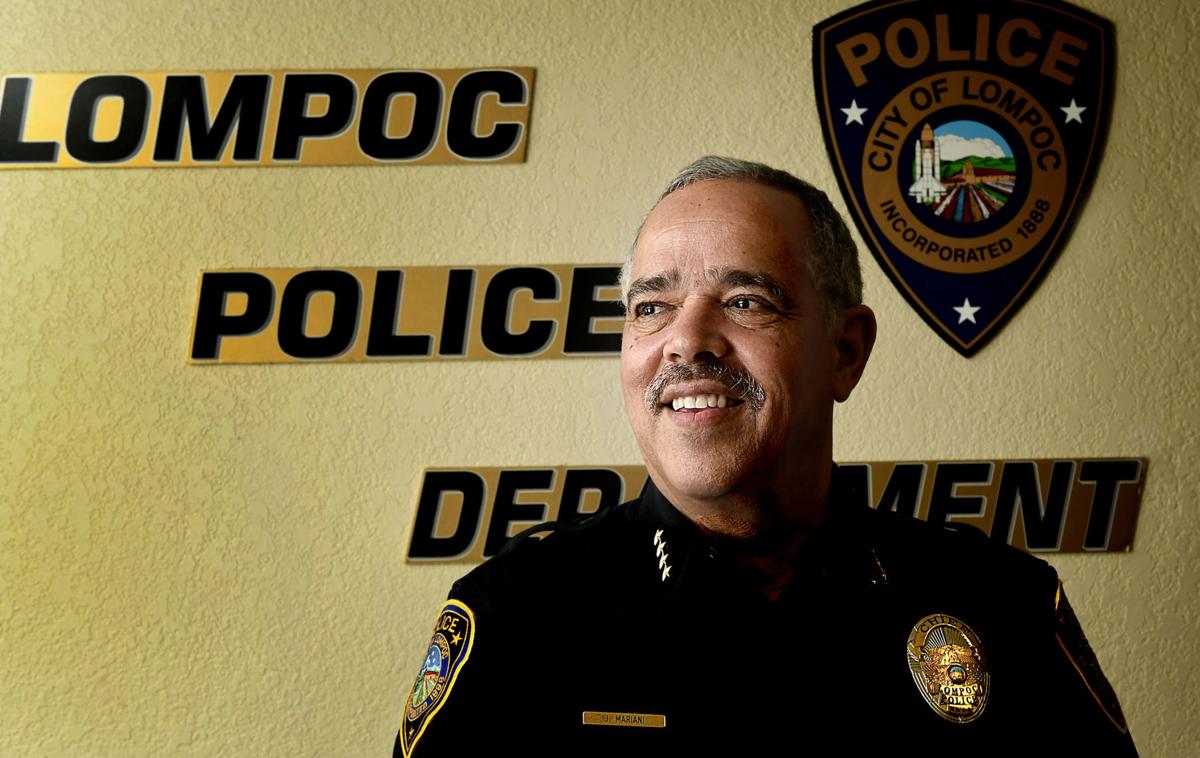 Joseph Mariani, sworn in as Lompoc's new police chief on Thursday, becomes the first bilingual and Hispanic officer to lead the department. Mariani takes over from Pat Walsh, who has led the department since 2014 and announced his resignation in January. 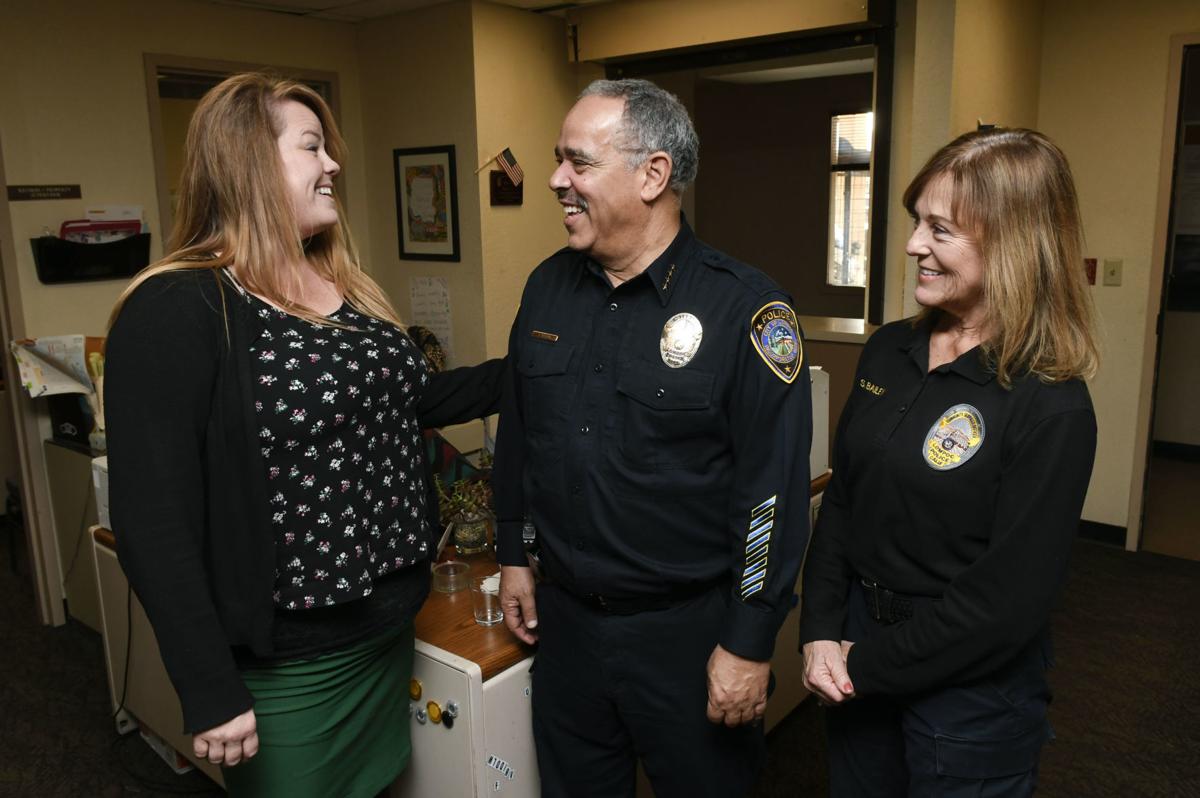 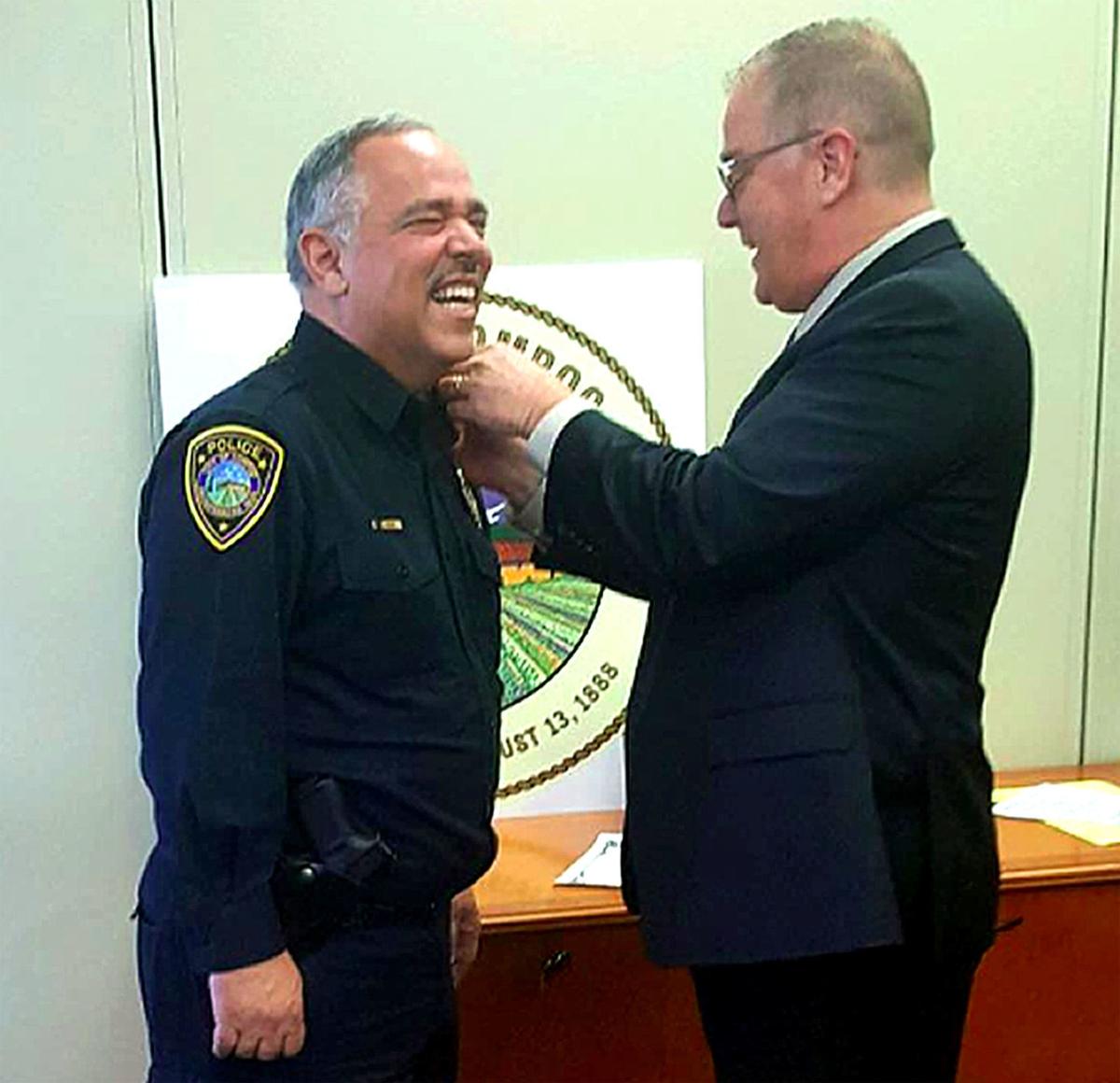 Lompoc Police Chief Joseph Mariani receives his stars from Pat Walsh during a ceremony on Thursday. Walsh led the department since 2014 and announced his resignation in January.

Despite being in the middle of an increasingly hectic schedule while also continuing to clear out what would soon be his former office, Joe Mariani was in a cheerful mood Thursday afternoon as he navigated the halls of the Lompoc Police Department.

“I’m in the middle of moving, so it’s kind of a mess,” Mariani said, laughing, as he opened the door to the office he was in the process of vacating.

Just a few hours later, the 42-year law enforcement veteran, who spent most of his career with the Los Angeles Police Department, was officially sworn in as Lompoc’s chief of police. That small, private ceremony, which took place at the Lompoc Police Station, will be followed by a public observance, at which Mariani will ceremonially take his oath of office, at Tuesday evening’s meeting of the Lompoc City Council.

In between those Thursday duties, though, Mariani took a short break to talk about his vision and goals for the department’s future, what it means to him to be the department’s first Hispanic and bilingual chief and his appreciation for the Lompoc community.

Before looking ahead, Mariani first expressed his gratitude for his predecessor, former Chief Pat Walsh. It was the chance to work for Walsh, Mariani said, that convinced him to come out of retirement four years ago and accept a position as a captain with the Lompoc Police Department.

“Quite honestly, it comes with some mixed feelings, primarily because I’ve enjoyed working for the (previous) chief,” Mariani said of his new role.

Going forward, Mariani said that he will continue to push for, and build upon, a lot of what Walsh did before him. Mariani called Walsh — who took over as Lompoc’s police chief in September 2014, almost exactly one year before Mariani was hired — a “fantastic” leader and said that they share a lot of the same values regarding community policing.

“Much of what I’m going to be doing is going to be pretty much in line with what Chief Walsh has already started and the foundation that he’s laid,” Mariani said. “He’s done some tremendous work, and, quite honestly, the reason we had such a great working relationship is because I embraced his philosophy about policing and management for the city.”

Among those shared beliefs, Mariani said, are “the need to really build solid relationships with the community, the need to be open (and) the need to be progressive — and we’ve done those things.”

“That’s very commendable on his part,” he said of Walsh. “There’s no need for me to really change. There will be some changes, but also, anytime there’s a transfer in management, wise managers do not make any abrupt changes. We have to incrementally do some things, and we’ll be looking down the road to do some things.”

As for his immediate plans, Mariani said he has two main objectives: to improve and get the department’s dispatch center fully staffed and to bring up the staffing levels for officers in the department.

Currently, the Lompoc Police Department has 44 officer positions allocated in the city’s budget. Mariani said he would like to bring that total up to at least 50, which is about how many positions the department had five years ago.

“We’ve had some cuts, but eventually — not eventually, but imperatively — we’ll need the funding for that,” he said of future growth.

Mariani acknowledged that those are “pretty lofty” goals, but he said he is hopeful as the city moves closer toward its budget hearings for the 2019-21 fiscal years. A public goal-setting workshop, which will set the stage for those discussions, will be held from 9 a.m. to noon Saturday, March 9, at Lompoc City Hall.

“Right now we’re in budget talks and budget preparations, so a lot of that will have to be decided at a later point,” Mariani said. “But ideally, any police administrator always wants more officers because when we have more officers there’s more things that we can do.”

Even with the smaller staff, however, he said he’s been impressed with the department’s “phenomenal” ability to investigate crimes.

“Even in Los Angeles, I never had the clearance rates that I have here,” he said, referring to the statistic that measures “cleared,” or solved, crimes. “We’ve solved every major assault [over] the last couple years. ... We’ve solved all our homicides. … For a detective bureau our size to have a 70-percent clearance rate is pretty impressive.”

Mariani said he thinks his Hispanic background and ability to communicate in Spanish will enhance his effectiveness with the community.

He’s seen first hand how his bilingual skills made a difference during his time in L.A. At one point, he was the LAPD’s spokesperson for Hispanic media.

“That’s always been a good resource for me, the fact that I can communicate in Spanish, but at the end of the day, no matter what position I’ve held, my commitment is to serve everyone in the community,” he said.

Asked if he felt like Spanish-speaking residents might feel a higher comfort level being able to communicate with the city’s top cop in their native language, Mariani said that shouldn't be anything new.

“Sure, that happens, but I’ve been here three and a half years and I’ve really gone out to reach the Hispanic community and they’ve been welcoming,” he said. “So, every opportunity I get — and I’ve gone to school meetings and other events where there has been a largely Hispanic audience — I’ve used my bilingual ability to communicate with people.

“But the good thing is that I don’t have that responsibility by myself,” he added. “I have many officers here who are also bilingual who grew up in this city and who have a stake in the community. That’s a good thing, too.”

More than anything, Mariani said he is excited to continue his service to the Lompoc community.

Walsh, who initially announced his plans to step down in January, said he felt like he was leaving the department in capable hands.

“I could not be happier that Joe Mariani is stepping into the police chief role,” Walsh said in a statement released by the city. “Joe is an exceptional leader, his experience and knowledge of law enforcement are vast, and he will serve the Lompoc Police Department well."

Among the experience that Mariani brought with him to Lompoc was 34 years with the LAPD, from which he retired honorably in 2010. During his time in L.A., he worked a variety of assignments, including patrol officer, narcotics officer, D.A.R.E. officer, vice officer, internal affairs investigator, detective, sergeant, lieutenant and captain.

Beginning in 2007, Mariani managed the recruitment and hiring process for the LAPD, and during his tenure the police department attained a force of 10,000 officers for the first time in the department’s history, according to the city of Lompoc.

Still, Mariani said his time in Lompoc has been worth ending his early retirement.

“Let me tell you: This has probably been one of the highlights of my life, living here in Lompoc,” he said. “And the reason I say that is this is perhaps one of the best kept secrets. My family, my friends, my professional colleagues who come out here and visit are just so impressed with the city, the area and all that it has to offer.

“I think that we’re a jewel here on the Central Coast,” he added. “Like anywhere else, we have some challenges, but what a great place to live. And the people here are phenomenal. That’s what’s really made me decide to make this my home — I love being a part of this community and it’s because of the people who live here.”

Given that he has already retired once, Mariani acknowledged that his tenure as chief likely won’t break any longevity records. He commended the officers working under him, though, and said that he hopes to help develop a succession plan for when his time ends.

But before thinking about the end, Mariani said he’s excited for his new beginning. His family will likely join him for the public, symbolic swearing-in ceremony at Tuesday’s City Council meeting, which is scheduled to begin at 6:30 p.m. at Lompoc City Hall.

“The chief of police has to serve the community and has to serve his or her department, so that’s a great deal of responsibility,” he said. “But the good thing is I’m not by myself. I have a lot of capable people that will engage with me and that are going to help me do this job because it’d be foolish for me to think I could do this by myself.”

Capt. Joseph Mariani has been appointed to serve as Lompoc's new police chief, becoming the first bilingual and Hispanic officer to lead the d…

With a steady rain falling outside, many tears were shed inside a packed Lompoc City Hall on Tuesday night as the city welcomed its newest chi…

Former Lompoc Police Chief Pat Walsh, who stepped down from his Lompoc post this year, has been hired as the first chief of police in the Sout…

Joseph Mariani, sworn in as Lompoc's new police chief on Thursday, becomes the first bilingual and Hispanic officer to lead the department. Mariani takes over from Pat Walsh, who has led the department since 2014 and announced his resignation in January.

Lompoc Police Chief Joseph Mariani receives his stars from Pat Walsh during a ceremony on Thursday. Walsh led the department since 2014 and announced his resignation in January.