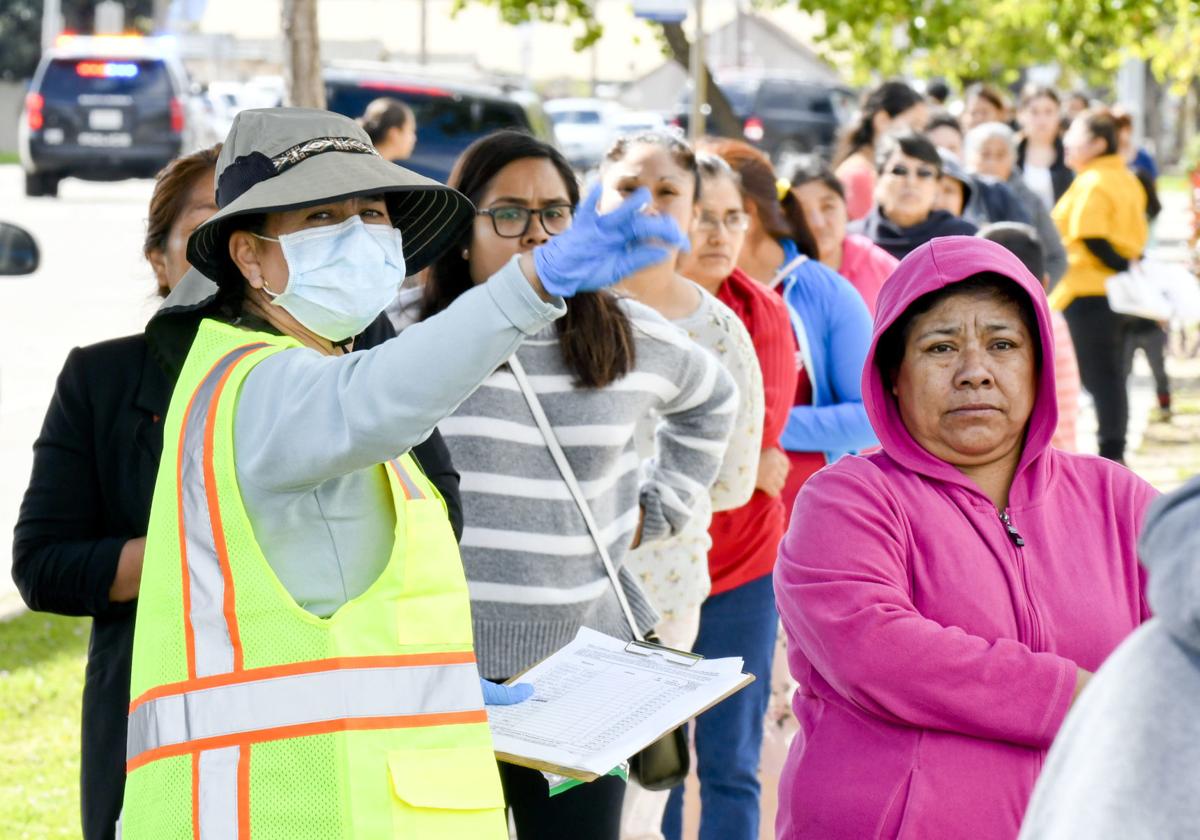 A volunteer directs people in line during a Foodbank distribution at the Boys & Girls Club in Santa Maria on N. Railroad Ave. on Wednesday. 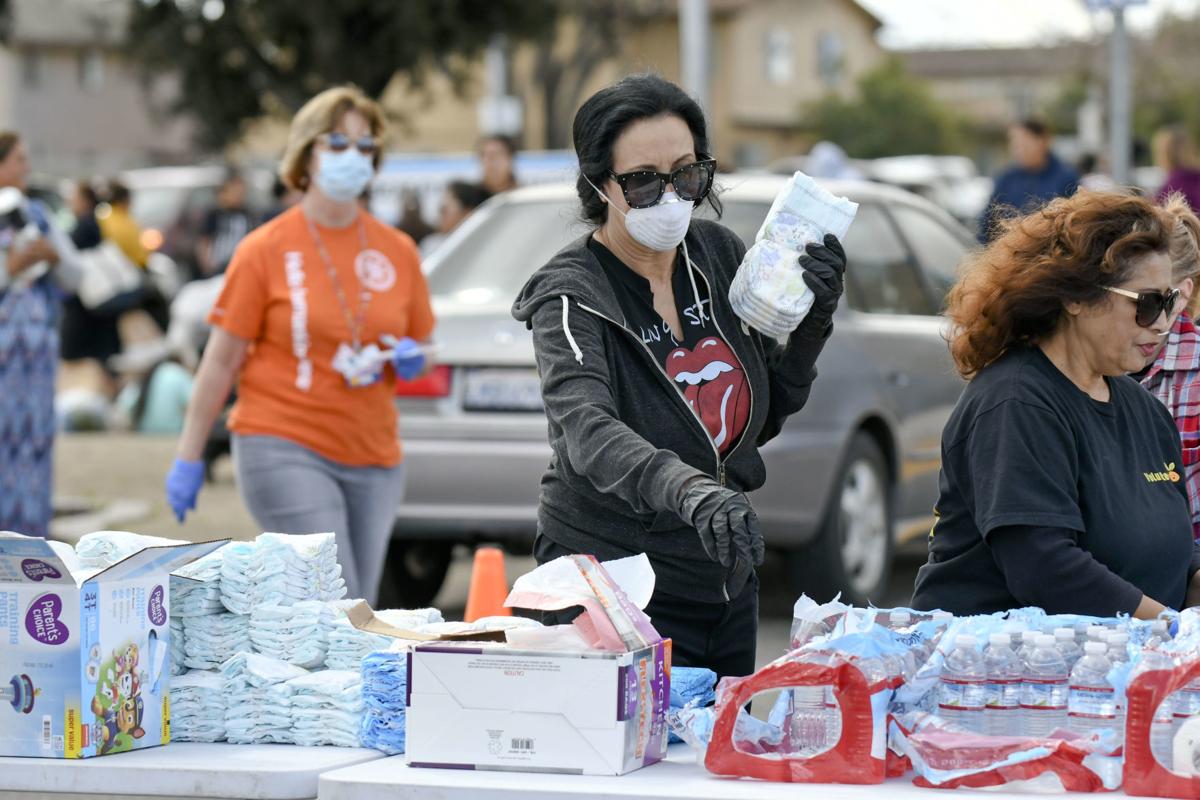 Lisa Ray, of the Children's Resource Network, packages supplies to be distributed at the Boys & Girls Club in Santa Maria on Wednesday. 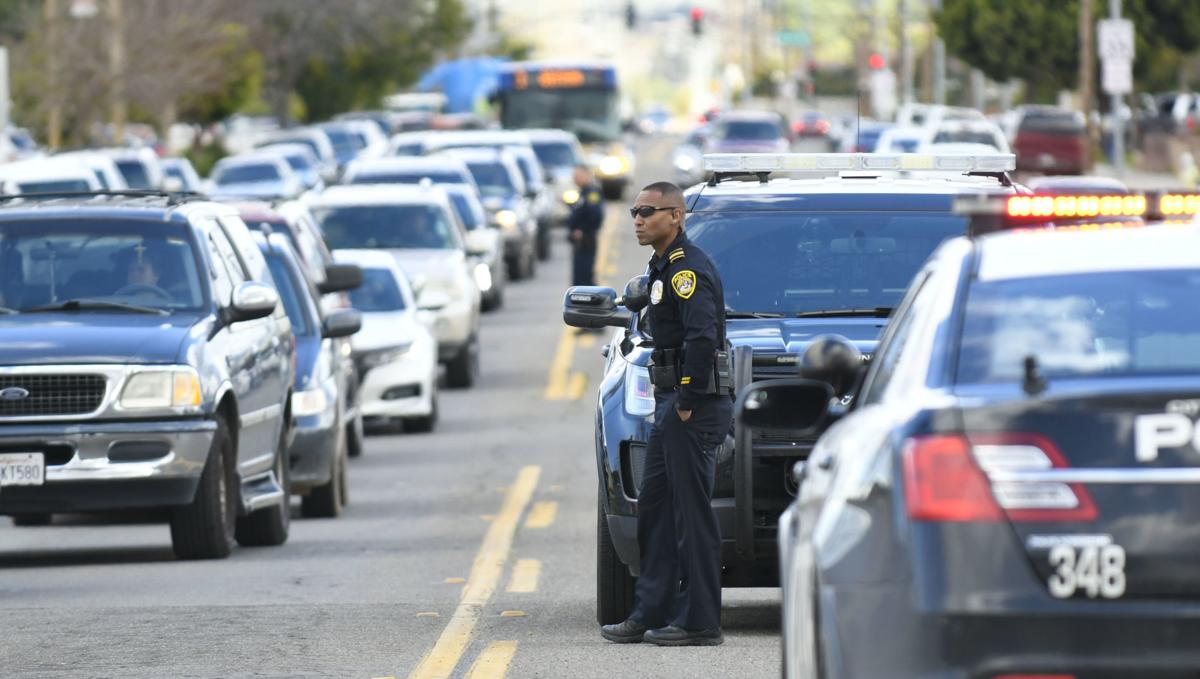 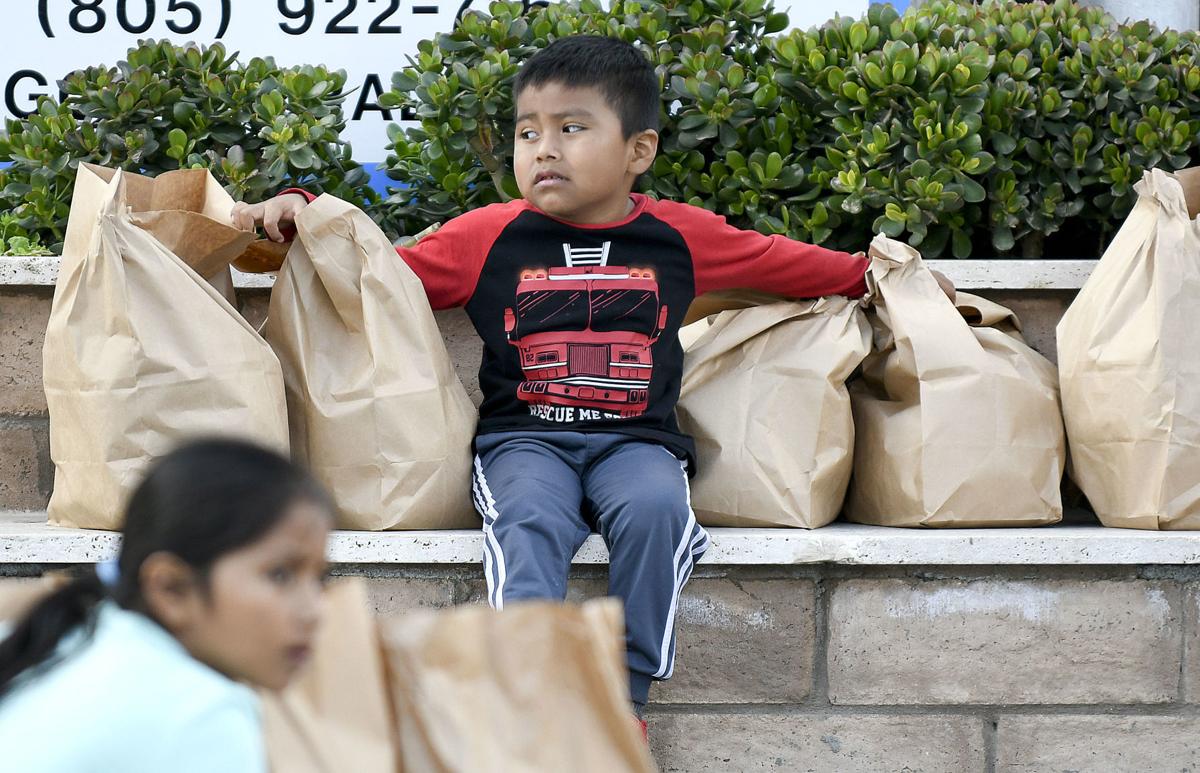 A boy waits with packaged groceries during a Foodbank distribution at the Boys & Girls Club in Santa Maria on Wednesday. 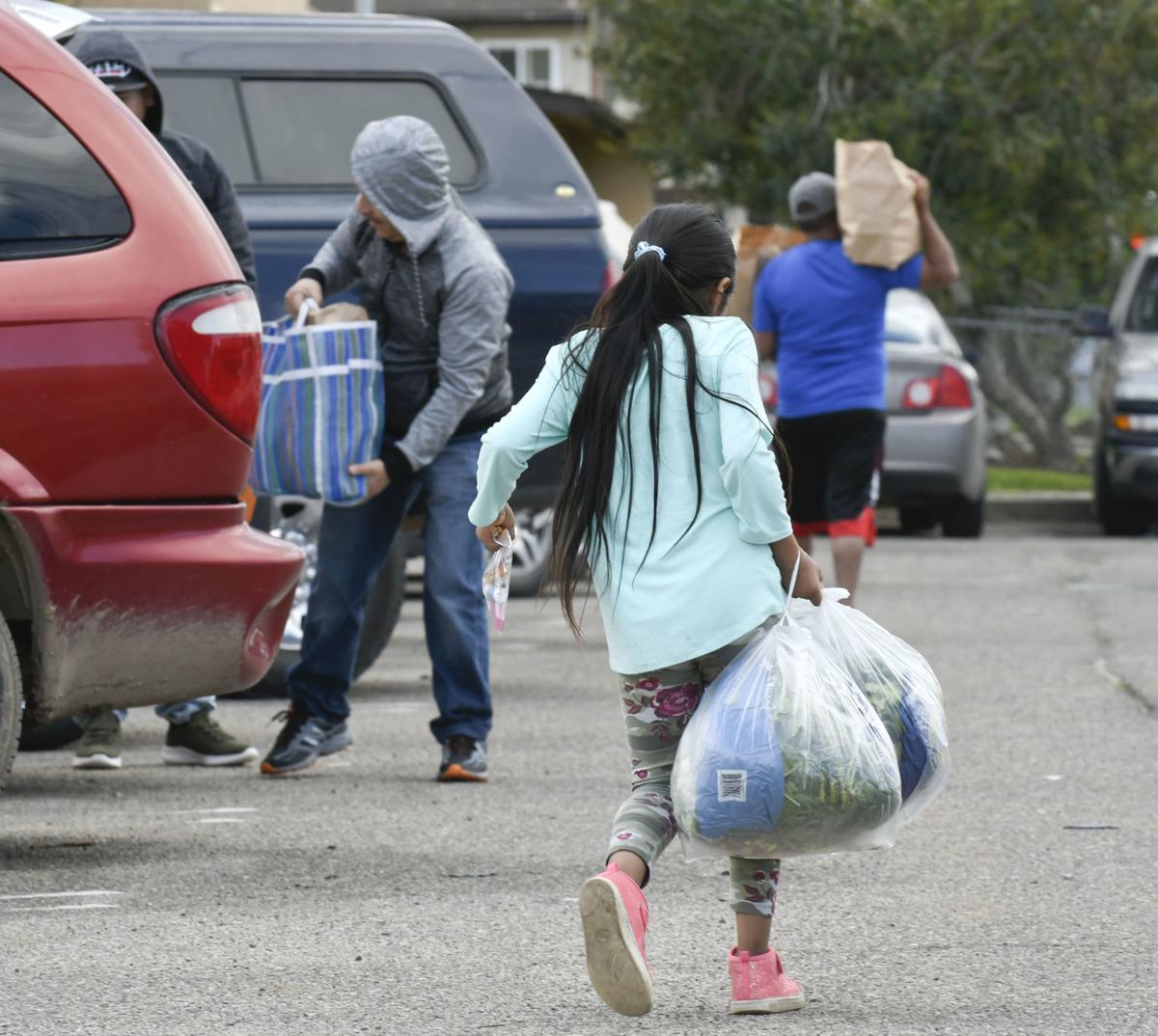 Families carry groceries during a Foodbank distribution at the Boys & Girls Club in Santa Maria on Wednesday.

A line of people stretched down the block from the Boys and Girls Club in Santa Maria Wednesday to receive bags of groceries from the Foodbank of Santa Barbara County, while police officers directed the flood of incoming cars to a drive-thru line in the parking lot.

Men, women and children stood at designated cones along the sidewalk, standing six feet apart as a measure prescribed by local health officials to avoid contracting, or spreading the COVID-19 virus.

The scene reflected the surge in residents showing up at food distribution sites, prompting Foodbank officials Wednesday to request help from volunteers and National Guard troops to support the growing numbers in need of food during the coronavirus pandemic.

Distribution sites across the county that normally serve about 100 families each week are now experiencing hundreds of individuals lining up for food on a daily basis, said Foodbank spokeswoman Judith Smith-Meyer.

On March 15 Gov. Gavin Newsom ordered nonessential businesses to close, leading to massive layoffs and thousands of individuals without an income to pay for basic necessities like food, Smith-Meyer said.

The request for 20 National Guardsmen from Point Mugu, which hasn't yet been approved, was made by county officials on behalf of Foodbank CEO Erik Talkin. However, that number could increase to 60 as the need increases, said Smith-Meyer.

The Santa Barbara County community has done a good job on holding down coronavirus infection even as local agencies are expanding and strengthening their efforts, but health officials on Tuesday urged residents to be more vigilant about precautions to prevent the spread of COVID-19.

The guardsmen would serve a logistical role, not as enforcement, meaning they'd help with tasks such as driving forklifts, packing boxes and acting as distribution site leaders.

Additionally, the Foodbank is seeking more volunteers across the county because many of their workers most at risk for coronavirus have been told to stay home.

The 20,000 senior citizens enrolled in the Foodbank's Brown Bag program were switched to home delivery after Newsom called for at-risk residents and those 65 and older to isolate themselves at home.

Seniors, and others, can receive home deliveries of fresh produce and groceries by calling 211.

Of the 50 food distribution sites throughout the county, 20 of those are new emergency drive-thru sites, Smith-Meyer said.

“The increase in demand was unbelievable last week," said Jamie Diggs, Foodbank partner services manager. “Our new emergency food distribution right next door at Lompoc Boys and Girls Club was due to begin at 1 p.m. on Friday. At 10 a.m., 200 families were already lined up waiting for food.”

Those who waited at the Boys and Girls Club in Santa Maria Wednesday included all age groups, and volunteers wore N95 masks and gloves as they handed out bags of groceries.

Beatriz Ruiz, 37, of Santa Maria and a single mother of three, said she recently lost her job as a refractionist at a local eye clinic, then found herself at the food pantry for the first time in her life.

Ruiz, who also has an autoimmune disease, immediately filed for unemployment, although a state official told her that she may not see benefits for at least 30 to 60 days.

She's not too worried, she said, at least for now, about expenses, although that could change in a month.

"It is hard right now," Ruiz said. "There's no more insurance, no more income, no nothing."

Residents like Ruiz are among the most affected by the sudden loss of jobs caused by emergency orders closing businesses, said Lisa Ray, founder of Childrens Resource Network of the Central Coast.

Ray, along with the Boys and Girls Club, have partnered with the Foodbank to meet the increased demand for food.

Ray praised local Walmart store manager Alex Najeri for acting on his own accord and donating necessary items to the Foodbank.

More items are desperately needed, Ray said, including toiletries, paper towels and diapers of all sizes — which will be accepted in opened and unopened packages.

"We all got stopped short," Ray said. "Imagine being a family already under duress. They're living day by day and can't pay for things in bulk.

"This is just the beginning," Ray said.

A hopeful message in Orcutt

A hopeful message in Orcutt

St. Mary of the Assumption

We are working hard to get answers about the impact and reaction to the coronavirus in Santa Barbara County, this is a collection of those sto…

To support local residents in need during the current health crisis, St. Mark's-in-the-Valley Episcopal Church announced that it will offer a …

Paper bags of food were arranged via assembly line at a Santa Maria food bank warehouse on Friday by volunteers and members of the National Guard, who arrived earlier that morning to provide support during a surge in demand for basic provisions among residents due to the COVID-19 pandemic.

A volunteer directs people in line during a Foodbank distribution at the Boys & Girls Club in Santa Maria on N. Railroad Ave. on Wednesday.

Lisa Ray, of the Children's Resource Network, packages supplies to be distributed at the Boys & Girls Club in Santa Maria on Wednesday.

A boy waits with packaged groceries during a Foodbank distribution at the Boys & Girls Club in Santa Maria on Wednesday.

Families carry groceries during a Foodbank distribution at the Boys & Girls Club in Santa Maria on Wednesday.