Kim Blea can still remember the nerves she felt when she approached her parents as a 20-year-old and asked them to take out a loan, using their home as collateral, so she and her then-husband could purchase a Lompoc restaurant.

Four decades later, Blea laughs as she recalls the conversation.

That summary may be an understatement: Blea made the comment while sitting at a table in Tom’s, the burger joint that was purchased with the loan money and that is celebrating its 40-year anniversary this month.

Blea, who took over full ownership of the business in 2000, had one of her more emotional days at work on Dec. 3 — the exact 40-year anniversary date of the restaurant’s initial opening on Dec. 3, 1979. When Blea showed up that morning, she found 40 customers lined up and waiting for her. Each presented her with a carnation to celebrate the milestone.

“It was very cool; I cried,” she said of the surprise.

That impromptu celebration was organized by Jenn Villareal, Blea’s daughter who also works as a manager at the restaurant.

“It was cool to be able to see her get that moment,” said Villareal, who set everything up through a private Facebook page that she blocked her mother from viewing. “She’s very humble and doesn’t like to brag about herself, so I wanted to make sure she got some good love and attention.”

While the mother-daughter tandem runs much of the restaurant’s operation, they aren’t the only family members who have put in hours at the eatery. Nor are they the only people regularly within the restaurant that they consider family.

Over the years, Blea said that each of the five children raised by her and her current husband, Codie, have worked in the restaurant in some capacity. They all started as teens and also would pull shifts while back in town on breaks from college.

“We literally used to ride the bus here after school and we’d pretend to wash dishes or sit in the office and pretend we were employees,” said Villareal, who became a full-time employee 13 years ago. “Forever, I’ve always wanted to work here, so it was fun to actually get to do it.”

“My kids all have a really great work ethic because of seeing how hard this is and working here and seeing all that you have to deal with, with this breaking down and that breaking down,” she said.

As for the restaurant’s success and longevity, Blea and other staffers at the restaurant credit the customers, many of whom are considered extended family.

The bond between the restaurant and the regulars is so strong that if a longtime customer is unable to make it in at their regular time, they often call to let the staff know.

“They know if they don’t show up we’ll worry that something happened to them,” Villareal said. “It’s like family here.”

That also extends to the staff. Some employees have been at the restaurant for more than 30 years, including 53-year-old server Mary Waters, who started when she was 18.

“It’s not just a job; you look forward to seeing everybody you know,” Waters said of the enjoyment she gets out of her work.

Over the years, Tom’s — which has an A to Z burger offering on its menu and bills itself as the “home of the educated burger” — has also been deeply involved in community efforts. The restaurant has sponsored, and continues to do so, several youth sports teams and has hosted too many fundraisers and private gatherings to count.

Blea estimated that she’s donated at least $4,000 per year over the past 40 years, but added that “it’s probably a lot more than that.”

“My feeling on that is, I give back to the community because the reason I’m still here is because of the community,” she said.

While Blea acknowledged that she has begun thinking about retirement, she believes she’d get too bored. When the time does come, though, she expressed confidence that Villareal would be able to keep everything running.

Villareal admitted that it won’t be easy to fill her mother’s shoes.

Blea, who expressed gratitude to the many Lompoc residents who have worked at and/or patronized Tom’s over the past 40 years, said she’d love to see the restaurant, located in the plaza at 115 E. College Ave. since 1987, remain a Lompoc staple.

“I’m hoping she can continue the legacy,” she said of her daughter. “She has the personality and the energy that I had when we first started.”

The fifth annual Lompoc Restaurant Week will kick off Monday, Feb. 24, and last through Sunday, March 1. At least 20 local eateries are participating in this year’s campaign, which was coordinated by the Lompoc Valley Chamber of Commerce. 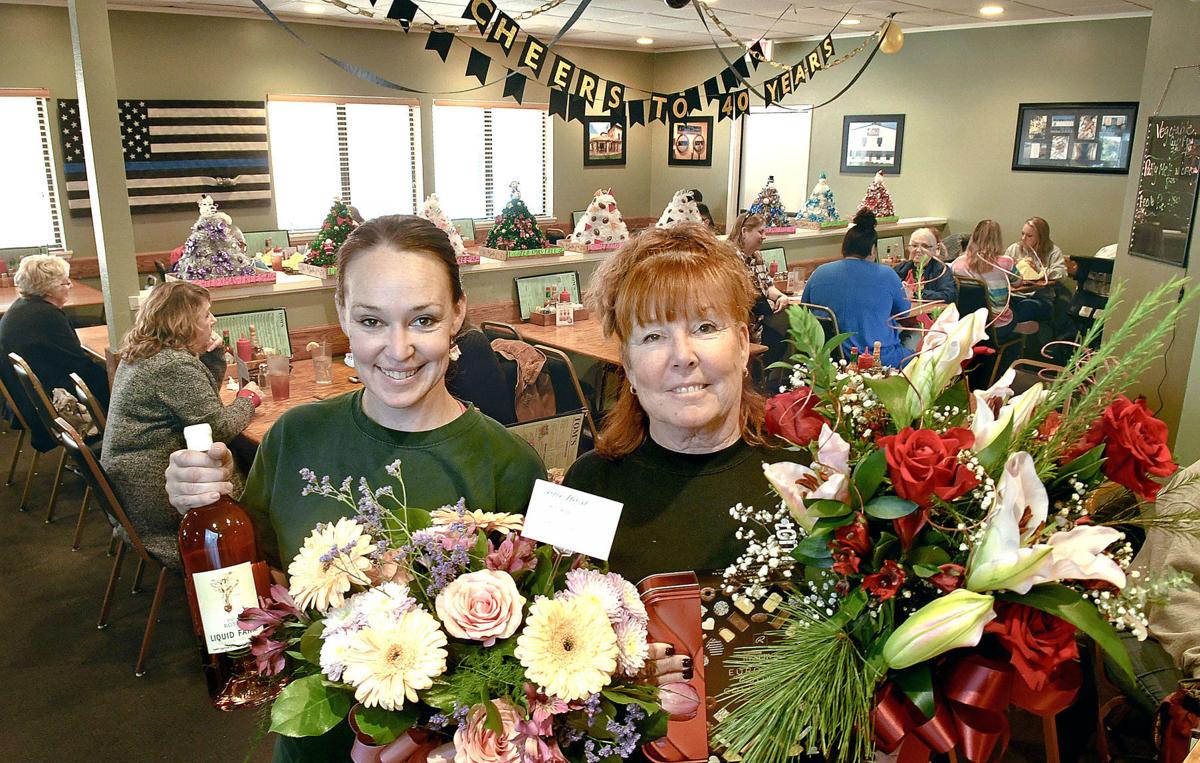 Kim Blea, center, and her daughter, Jenn Villarreal, hold flowers and gifts customers gave them at Tom's restaurant in Lompoc. The popular "home of the educated hamburger" is celebrating its 40-year anniversary this month. 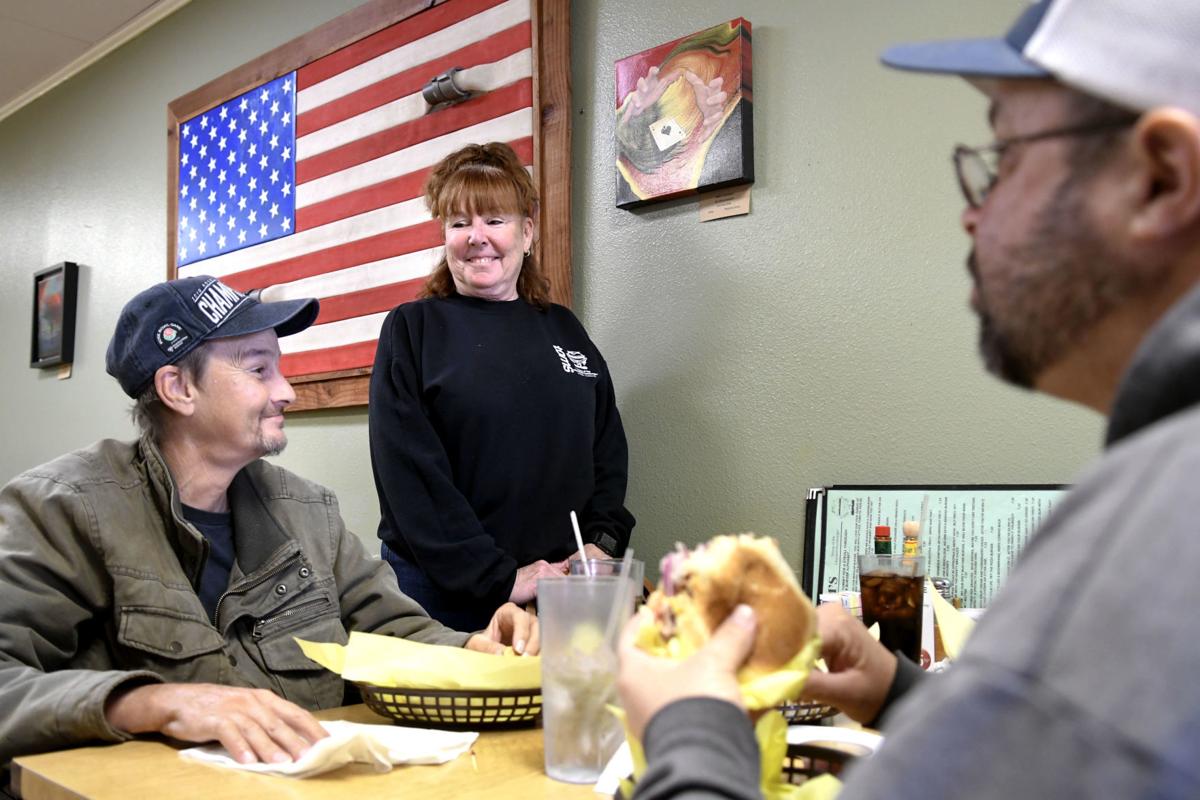 Kim Blea, standing, talks to Brian Day, who was a cook at Tom's for 28 years, and Timmy Dodson at the "home of the educated hamburger." Dodson is eating a "B" hamburger, described on the menu as "Beware of the blundering idiots who decided we should have a cheeseburger that is really cheesy, so we pulled a double whammy and now you get both American and Swiss cheese." 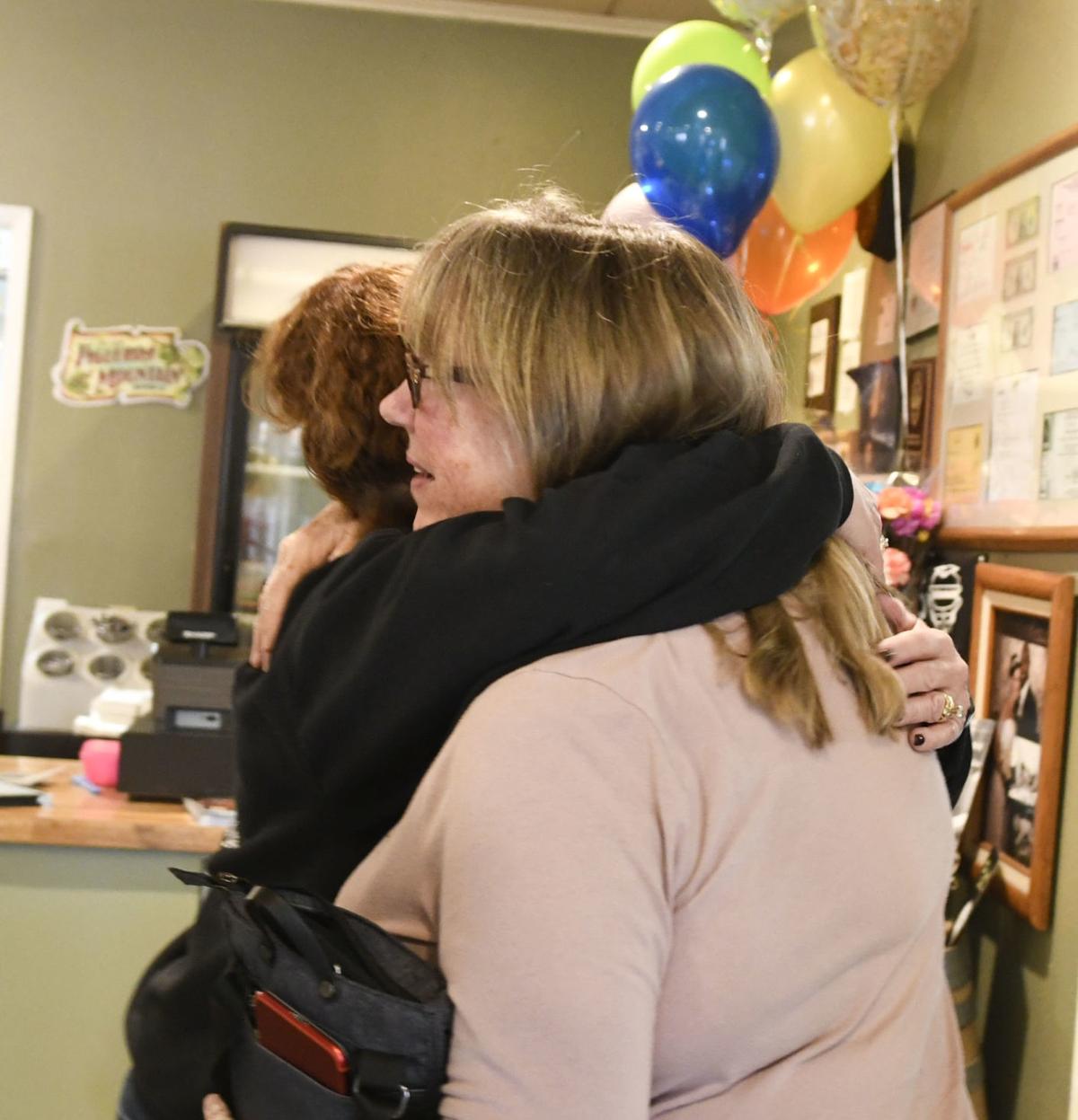 A customer hugs Kim Blea, left, owner of Tom's restaurant in Lompoc. The popular "home of the educated hamburger" is celebrating its 40-year anniversary this month. 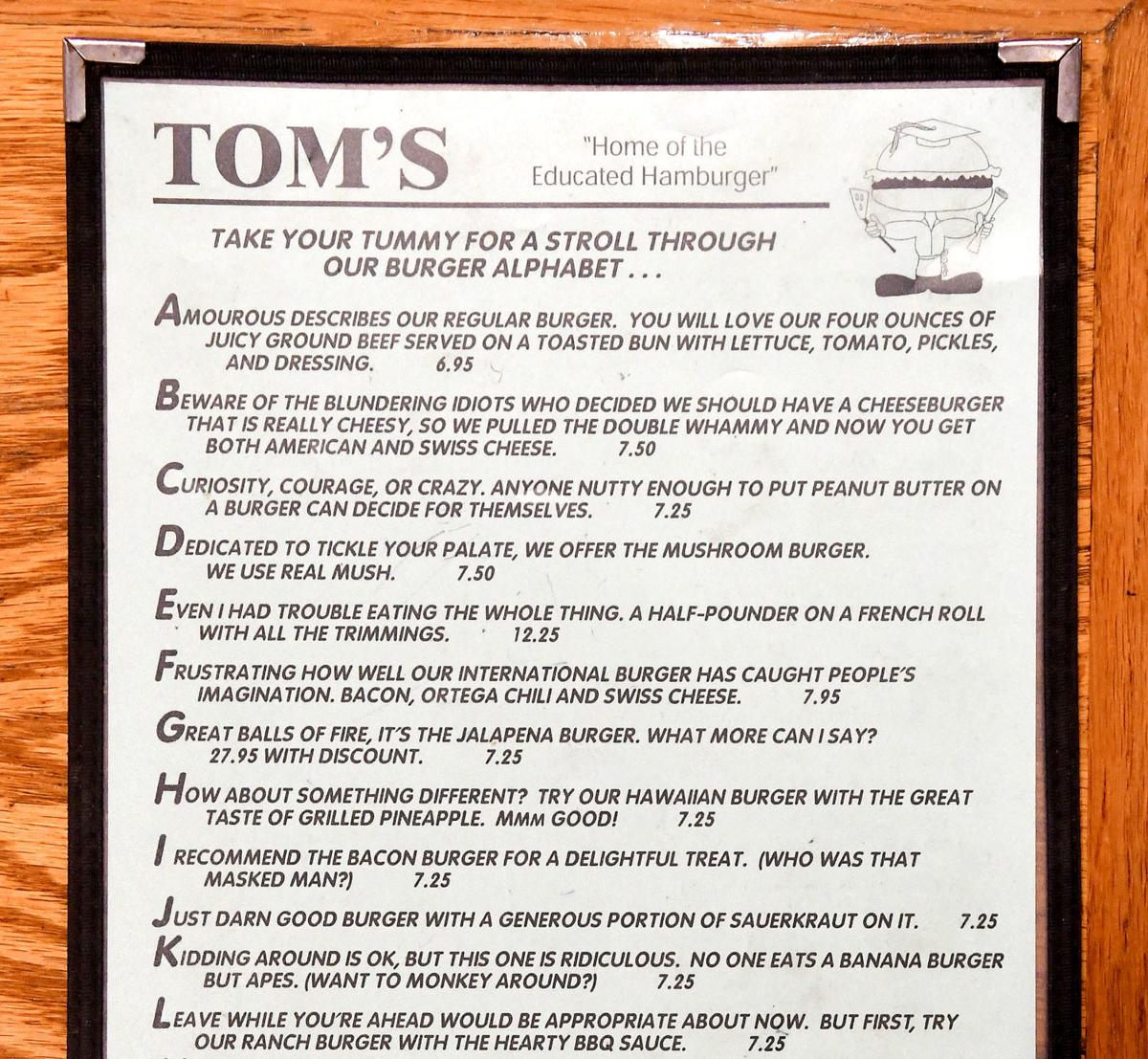 The top half of the A-Z burger offering on a menu at Tom's restaurant is shown.