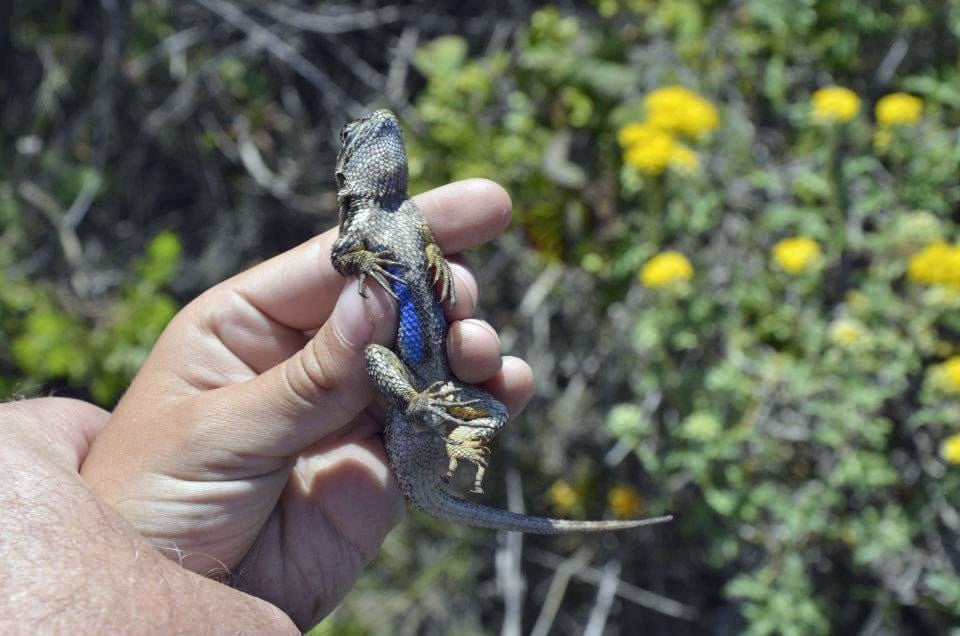 One of the most common reptiles in California, the blue belly lizard has a certain protein in its blood that kills the bacteria causing Lyme disease, which can be carried by ticks.

The days will become longer and longer as we head toward the summer solstice on June 20. With the longer days, a greater number of people are enjoying our famed Central Coast hiking trails and with it the increasing chances of coming across ticks and the diseases they can spread.

Like a scene out of a horror film, adult western black-legged ticks (Ixodes pacificus) dangle on tips of grasses and other low-lying vegetation in their ghastly host-seeking posture called questing. In this stance, they spread their two front clawed limbs wide open and wait patiently for hours or even days for unexciting creatures to brash by so they can dig their metal-like mouthparts inside their host and gorge themselves on blood. In other words, they let their banquet come to them. Contrary to popular belief, ticks don’t jump or fly.

At least the adult ticks can easily be seen; unlike the nymph or juvenile life stage, where the tick is about the size of a poppy seed and difficult to spot. The juveniles usually do not climb grasses or shrubs while host-seeking, instead, they lurk closer to the ground on top atop leaf and log litter on the forest floor; a perfect location to attach to lizards. In fact, research has shown just about 90 percent of host for tick nymphs are reptiles versus small mammals or birds.

This turns out to be a blessing and here’s why.

The western fence lizard (Sceloporus occidentalis), also lovingly referred to as a blue belly lizard, is one of most common reptiles found in California. As a kid, they were my favorite as they were relatively easy to catch. You could turn a blue belly on its back and gently rub their stomach, and they would go to sleep or pretend to. The males have distinctive iridescent patches of candy-metallic blue along their flanks.

More importantly, they have a certain protein in their blood that kills a corkscrew-shaped bacteria called Borrelia burgdorferi which causes Lyme disease.

Cal Poly professor Emily Taylor is the director of Physiological Ecology of Reptiles Lab at the university. She said that it is not just the western fence lizard; locally, it also includes other species like alligator lizards.

“They possess an immune protein in their blood that appears to kill the bacteria that causes Lyme disease," Taylor said. "This condition is significant because of the juvenile stages of the major vector for the disease, the western black-legged tick, often feed on lizards. If the ticks are previously infected, then eating the lizard's blood will kill all the bacteria, and they won't be able to pass it on to the next host when they are adults.”

In other words, our local lizards appear to be cleansing affected juvenile ticks and providing all of us a service. This is probably the primary reason why so few adult ticks carry the bacteria along the Central Coast and consequently there's a relatively low infection rate in California.

Here are some tips to avoid ticks from the Santa Barbara County Public Health Department:

• Wear light-colored clothing so that ticks can be seen more easily. Wear a long-sleeved shirt and tuck it into your pants. Tuck your pants into boots or socks.

• Stay on trails and avoid contact with bushes or grasses alongside trails where ticks are common.

• Control ticks on pets. Pets can bring ticks into contact with humans. Discuss tick control for your pets with your veterinarian.