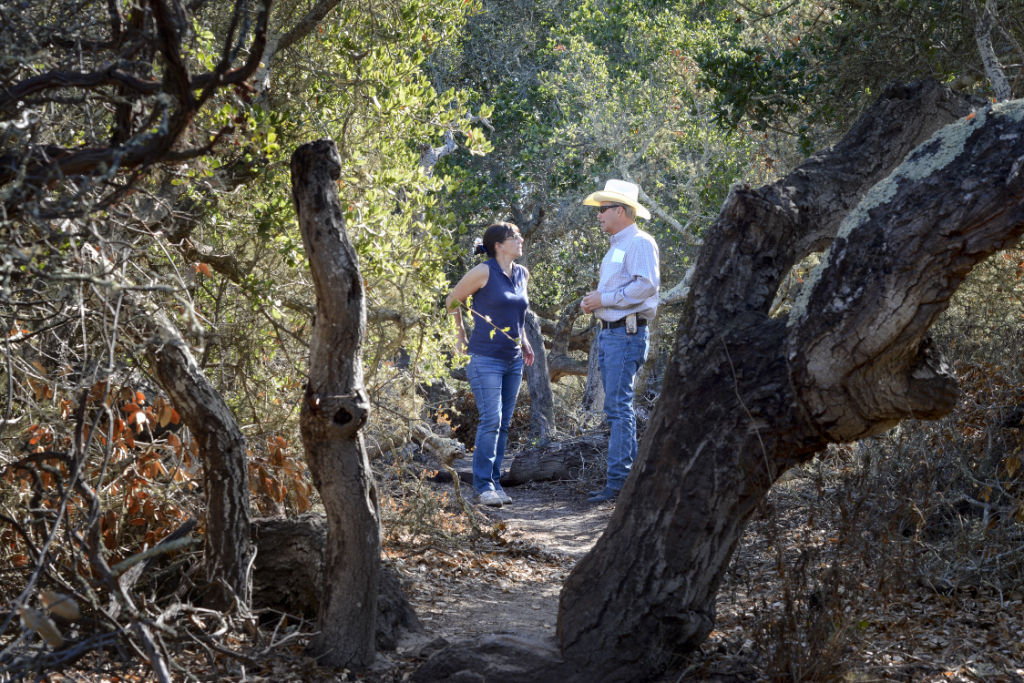 Christine Thompson, environmental scientist for the California Department of Fish and Wildlife, talks with Randy Collins, of the State Lands Commission, about an illegal trail cut through protected Burton Mesa chaparral. 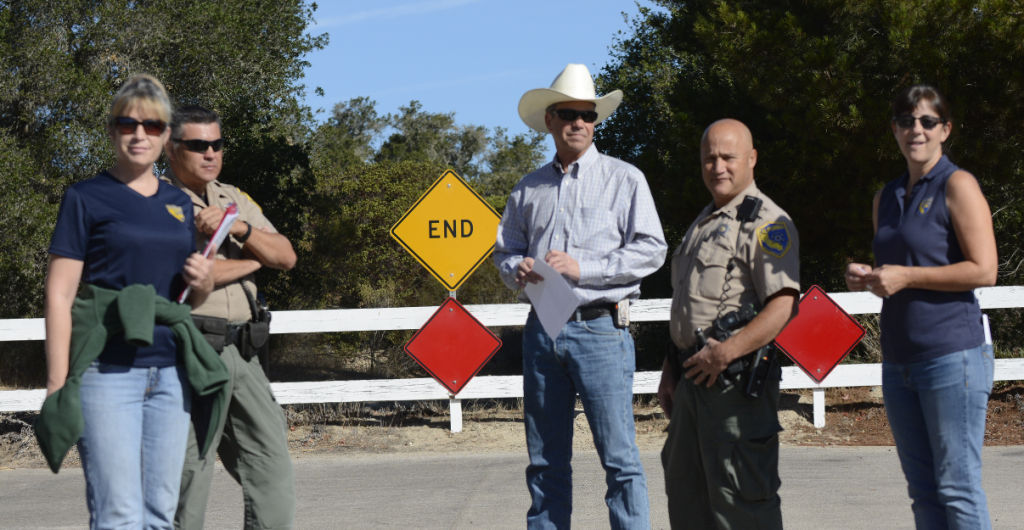 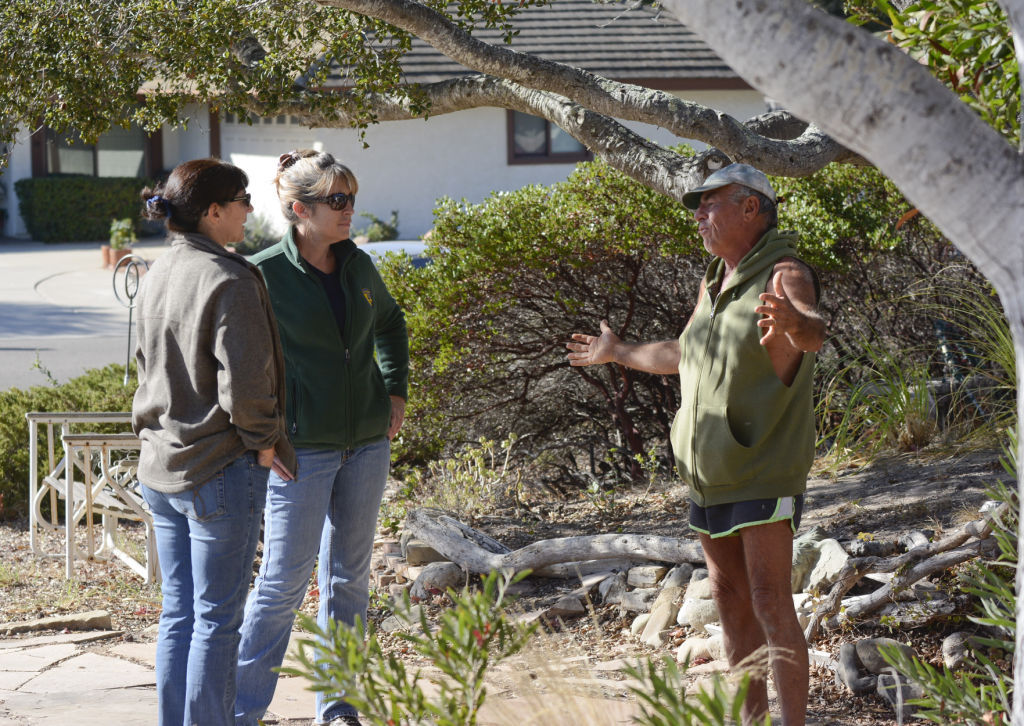 Christine Thompson, environmental scientist for the California Department of Fish and Wildlife, talks with Randy Collins, of the State Lands Commission, about an illegal trail cut through protected Burton Mesa chaparral.

As a child living in Vandenberg Village in the 1960s and '70s, Randy Phillips said some of his most prominent memories took place on the 5,368-acre patch of land now known as the Burton Mesa Ecological Reserve.

“I literally grew up and learned how to ride bikes out in the chaparral,” Phillips said. “I learned how to drive out there, ride motorcycles, hunt. Over time, I kind of evolved from the more destructive means of recreation to a less destruction mean — or at least, that’s what I thought.”

Phillips, a recreational bicyclist and member of the local Village Dirtbags, is one of hundreds of riders who now are being directly asked to keep their bikes off the property.

After bubbling under the surface for several months, a battle being waged between the California Department of Fish and Wildlife and local cyclists, led by the Dirtbags, appears to be coming to a head.

Officials with Fish and Wildlife, which manages the state-owned property, have vowed to step up enforcement of the reserve’s rules barring bicyclists. During a tour of the reserve Thursday, they pointed to extensive damage that has been caused to plant life and wildlife in the area, noting that much of it is caused by the riders who are disobeying a ban on bicycles that went into effect in 2007.

“It damages topsoil; it causes soil compaction; it encourages erosion; it disturbs wildlife movement; and foraging new trails breaks and damages the barks and so forth,” Janice Mackey, a public information officer with Fish and Wildlife, said Thursday. “And some of the cycling is actually displacing or pushing walkers and hikers off the trails.”

Mackey said that her department is still encouraging people to utilize the reserve for approved uses, such as walking, hiking and walking dogs on leashes, between the hours of sunrise and sunset.

The cyclists, she said, are not only disobeying the ban on bicycles but are also riding with headlamps after sunset, an issue that has drawn complaints from nearby residents, some of whom say they've nearly been run over.

Members of the Dirtbags, however, say they believe they, along with other cyclists who ride on the property, are being unfairly castigated.

The Dirtbags consist of about 40 riders, many of whom hold professional jobs and serve on several community boards. They organized the Burton Mesa Trail Users Facebook group, which has grown to about 1,200 members, to rally support for keeping the reserve open for cyclists.

Roger McConnell, a local financial adviser who also serves on the Lompoc Valley Medical Center’s Board of Directors, said he and others within the Dirtbags have gone through several avenues to try to work with Fish and Wildlife and present their case, but they have ultimately run into roadblocks.

“We’re not a bunch of wild renegades,” McConnell said. “We’ve tried to push this from an educational and professional point of view to work with Fish and Wildlife.”

The Dirtbags, who say they have volunteered to help the agency and the docents at the reserve, cite studies that conclude that bicycles, with tires 2- to 3-inches wide, don’t cause any more damage than a hiker would. Further, they argue that their impact on the overall property is miniscule when considering that the roughly 50 miles of bike trails — only about half of which are approved by Fish and Wildlife — account for less than one-third of 1 percent of the total land area of the reserve.

“So how big of an impact do the trail users actually have?” McConnell said. “That’s important for people to know. This is not a huge impact.”

Mackey acknowledged that the Department of Fish and Wildlife has had meetings with the Dirtbags, but she said that Fish and Wildlife, which is simply managing the property, doesn’t have the power to change those rules.

McConnell said that bikers have been riding the trails at the reserve long before Fish and Wildlife took over management. He said that Fish and Wildlife overlooked their riding until recent incidents in which a person, or group of people, began using chainsaws to cut through trees and build even more unauthorized trails.

“That’s what they kind of felt was the tipping point and that’s when I think they felt like, ‘OK, now we’ll start enforcing this,'” McConnell said, adding that the Dirtbags have not been involved in the removal of any trees or branches. “You can’t eliminate vandalism, but we want to work with them and bring a solution because we have a pretty big presence out there. We want to make sure stuff like that doesn’t happen.”

Another point of emphasis among the Dirtbags is that Burton Mesa is one of the few outdoor recreation areas left in Lompoc.

“Surf Beach is closed most of the year, the (Santa Ynez) river bed is closed and our community is completely encapsulated by this (Burton Mesa Ecological Reserve),” Phillips said, adding that road riding is a dangerous alternative. “But (Fish and Wlidlife) is just like, ‘No, we don’t care. All we care about is flora and fauna.’ It’s not about preserving recreational opportunities.”

In a notice scheduled to be sent out today by Fish and Wildlife, the agency is asking visitors to continue to enjoy the property — which is home to several unique and protected plant species — but to do so in an approved fashion.

Among the prohibited activities are mountain biking, hunting and horseback riding. On all state properties, it is illegal to feed wildlife, operate motorized vehicles outside of designated areas, disturb bird nests, release any fish or animal, start any fire or light fireworks or other explosive devices, disturb habitat, alter the landscape or remove vegetation.

“We all need to commit to protecting this reserve for all to enjoy in the years to come,” said Christine Thompson, an environmental scientist with Fish and Wildlife.

According to state law, failure to comply with those rules could result in a $1,000 fine and up to a year in jail.

Mackey said that enforcement will be ramped up if problems persist.

“We have enforcement staff, and they’re aware of what’s going on,” she said. “At some point, they’re going be out there. We’ll be stepping up our presence on the property.”

The Dirtbags have said that they, as a group, are trying to obey the rules and not ride on the property while they continue to push for change. They said they can’t speak for individual members, however, or the “several hundred” nonmember cyclists, many of them from out of town, who regularly use the trails and outnumber the hikers.

“Due to the popularity and the number of people riding out there, this isn’t going away,” McConnell said. “That’s why it’s to (Fish and Wildlife’s) benefit to work with us.”