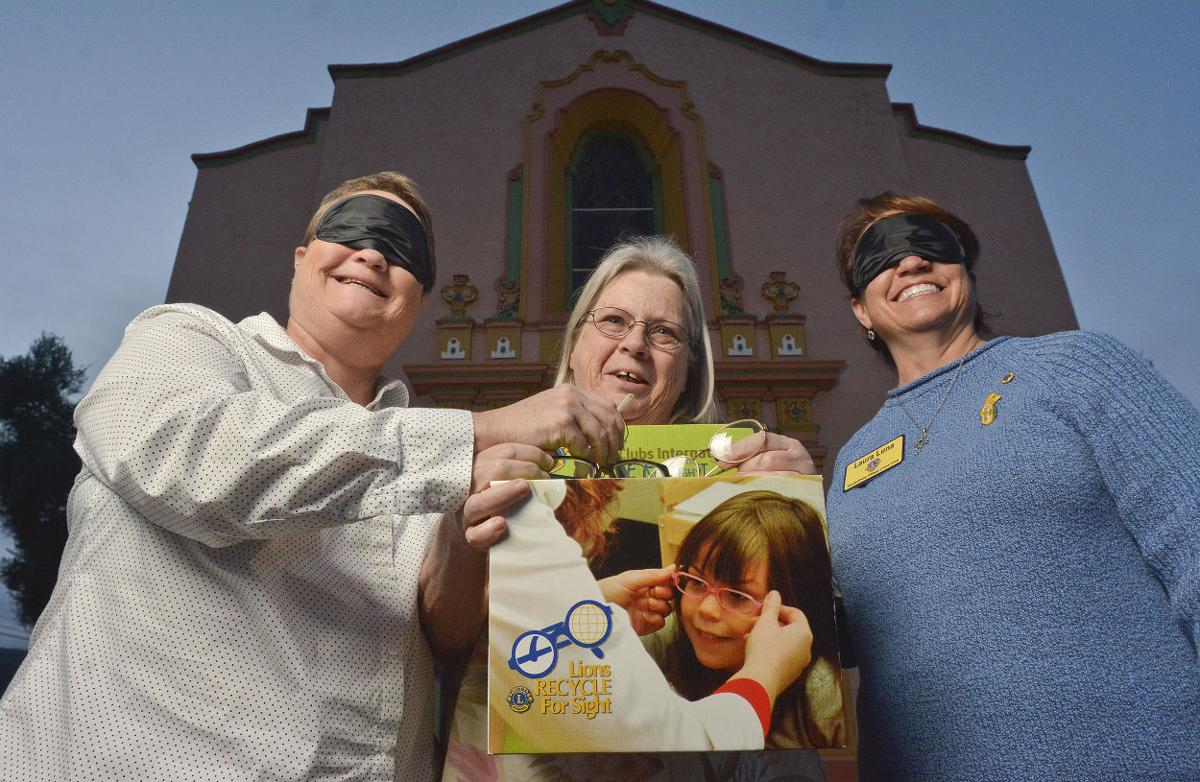 Vandenberg Village Lions Ann McCarty, left, and Laura Luna, right, try out the blindfolds participants will wear during the annual Dinner in the Dark benefit as Lion Arleen Lewis holds an eyeglasses donation box. The dinner, which will be held Saturday at La Purisima Parish Hall in Lompoc, raises funds for the club's eyesight program. 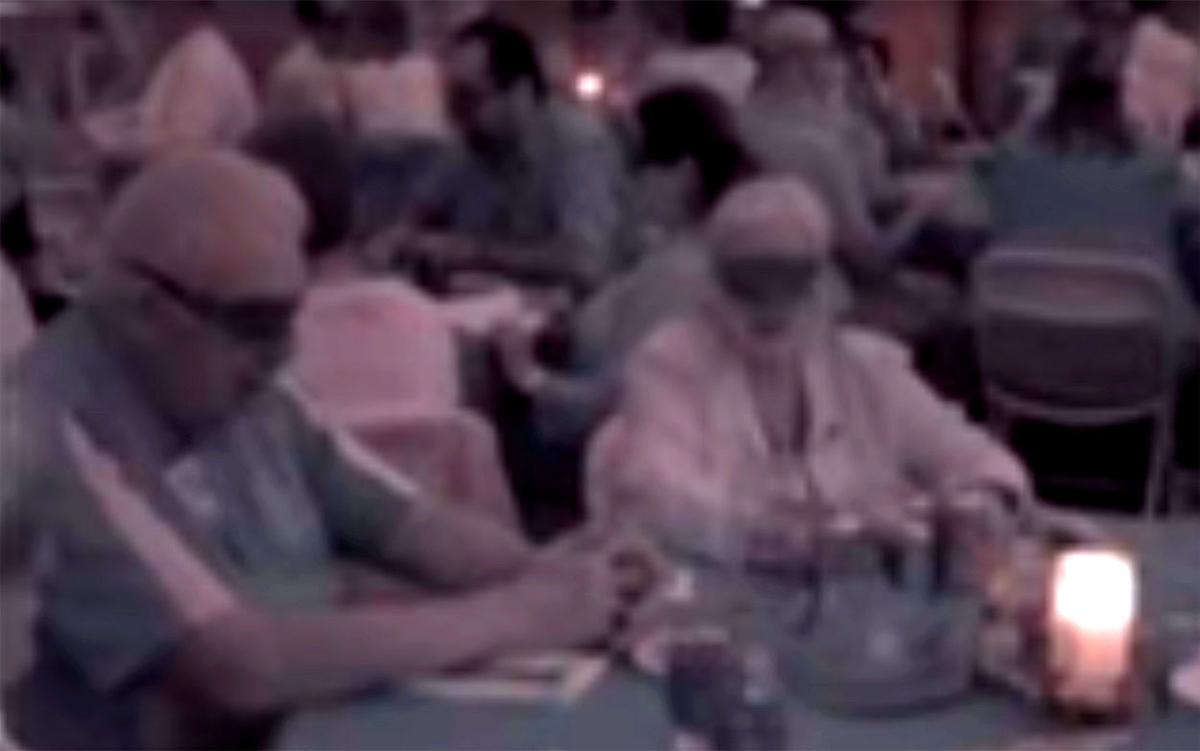 In a low-light enhanced video frame, participants at the 2015 Dinner in the Dark fundraiser try to eat their meals. This year's event will be held Saturday and raises funds for the Vandenberg Village Lions Club’s eyesight programs.

The Vandenberg Village Lions Club is once again inviting the Lompoc community to what the club hopes will serve as both an eye-closing and eye-opening experience.

The club will host its third Dinner in the Dark fundraiser from 5:30 to 8 p.m. Saturday in La Purisima Parish Hall, 213 W. Olive Ave.

At the event, which aims to raise awareness and bring attention to the sight-impaired, diners will wear blindfolds and eat in dim light as they experience some of what a sight-impaired person goes through 24 hours a day.

Of course, the dinner doesn’t always go as planned for the guests.

“The mayor (at the inaugural event) stuck his fingers in his mashed potatoes,” Arleen Lewis, a Lions Club member and former president, said with a laugh Wednesday. “The people there have fun with it.”

Along with the experience itself, the event also serves as a fundraiser for the Lions Club’s vision conservation programs.

Despite moving to January for the first time after two-straight years of being held in October, the event, which has a maximum capacity of 150 people, is on track to be the third consecutive sell-out.

A limited amount of tickets, however, are still available at $30 apiece. They can be purchased by contacting Gail Peterson-Latipow, a chair for the club’s vision and hearing conservation committee, at 733-2898 or at gailpl@outlook.com.

In addition to dinner, the event will include presentations as well as a silent auction, gift baskets and other raffle prizes.

The inaugural event raised about $5,500, and the 2014 event brought in about $5,000, according to Lions Club Secretary Ann McCarty.

“We’re hoping for $6,000 or so this year,” she said. “Every bit of the money we make with this fundraiser goes right back into the community.”

At least one member of the community who has been aided by the Lions Club’s efforts will share his experiences at Saturday’s dinner.

Lompoc resident Fernando Duran, who works in construction, said he can see a world of difference now after receiving an eye exam and a new set of eyeglasses from the Lions Club program.

“My vision with these new glasses is much better and my eyes are much better,” he said, noting that he had been using cheap, mostly ineffective glasses before. “I just want to thank them so much. I can see much better now.”

Peterson-Latipow said the club was able to assist seven of the 10 applicants who sought help in 2013, the year of the first Dinner in the Dark.

The number of applicants tripled to 30 the following year, and the club was able to help at least 25 of those.

She said many people have continued to show their appreciation for the life-changing assistance.

“One lady said, ‘Thank you for giving me back my sight,’” she said. “Other people are just in tears because they’re able to read again and do crossword puzzles.

"It’s just incredible what a difference we’ve been able to make, and we would not be able to do what we’re doing without the support of those who attend the Dinner in the Dark.”

The event’s organizers say they are thankful to have Lions Club member and optometrist Pinkheo Southaphanh, who practices at Clear Vision Optometry, on board to help with the programs.

Lewis, who initially brought the idea for the Dinner in the Dark to the Lions Club board, said the event is particularly personal for her.

Her sister is legally blind, she said, and she has personally received assistance herself from the club to help deal with her own failing eyesight.

“This is my way of giving back,” she said.

Those who attend Saturday’s dinner are encouraged to bring old eyeglasses that can be recycled.

Lions Club President Laura Luna said this year will be her first to actually sit and eat with a blindfold after having worked at the event in years past. She said she is excited to finally take part.

Vandenberg Village Lions Ann McCarty, left, and Laura Luna, right, try out the blindfolds participants will wear during the annual Dinner in the Dark benefit as Lion Arleen Lewis holds an eyeglasses donation box. The dinner, which will be held Saturday at La Purisima Parish Hall in Lompoc, raises funds for the club's eyesight program.

In a low-light enhanced video frame, participants at the 2015 Dinner in the Dark fundraiser try to eat their meals. This year's event will be held Saturday and raises funds for the Vandenberg Village Lions Club’s eyesight programs.