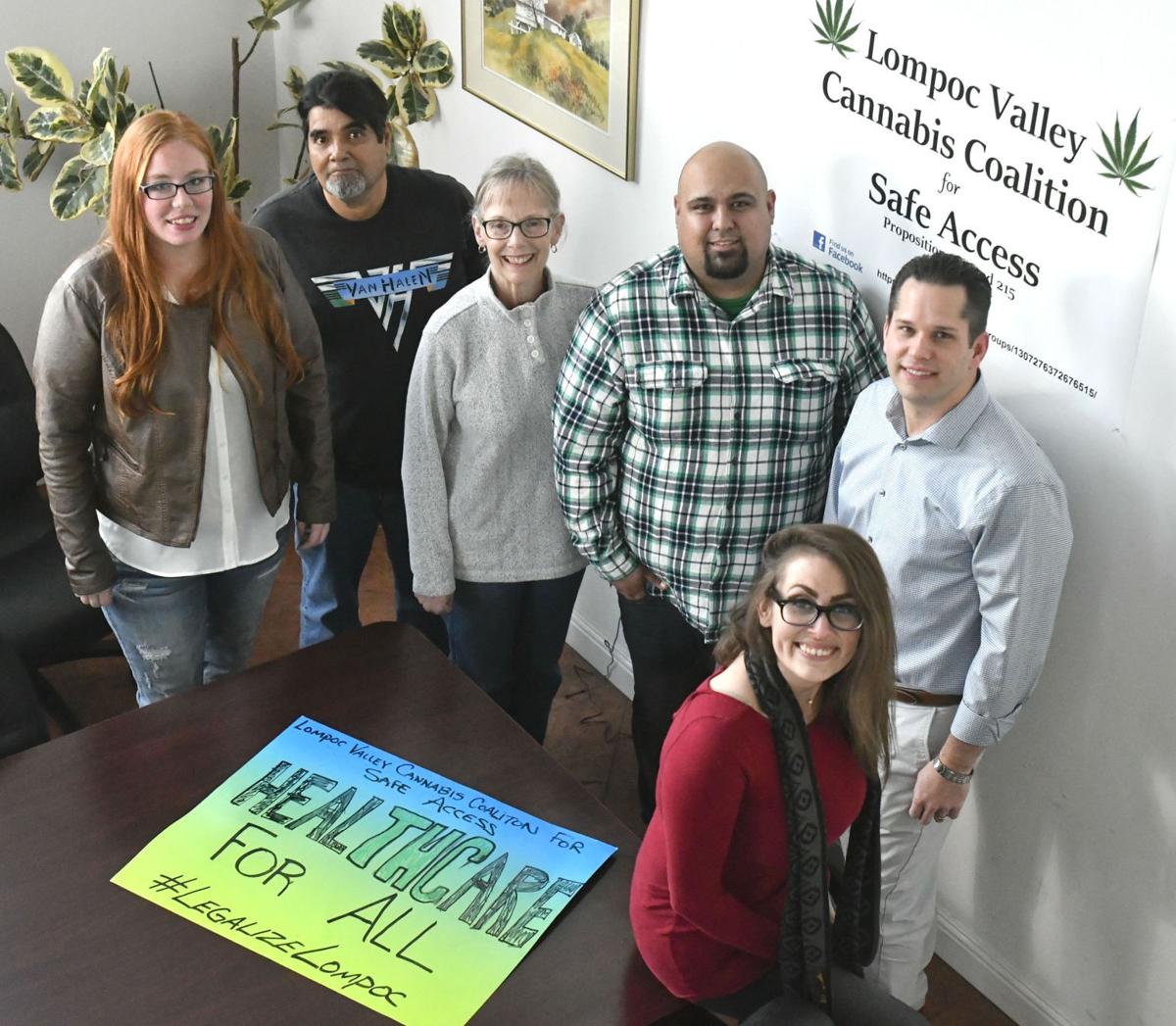 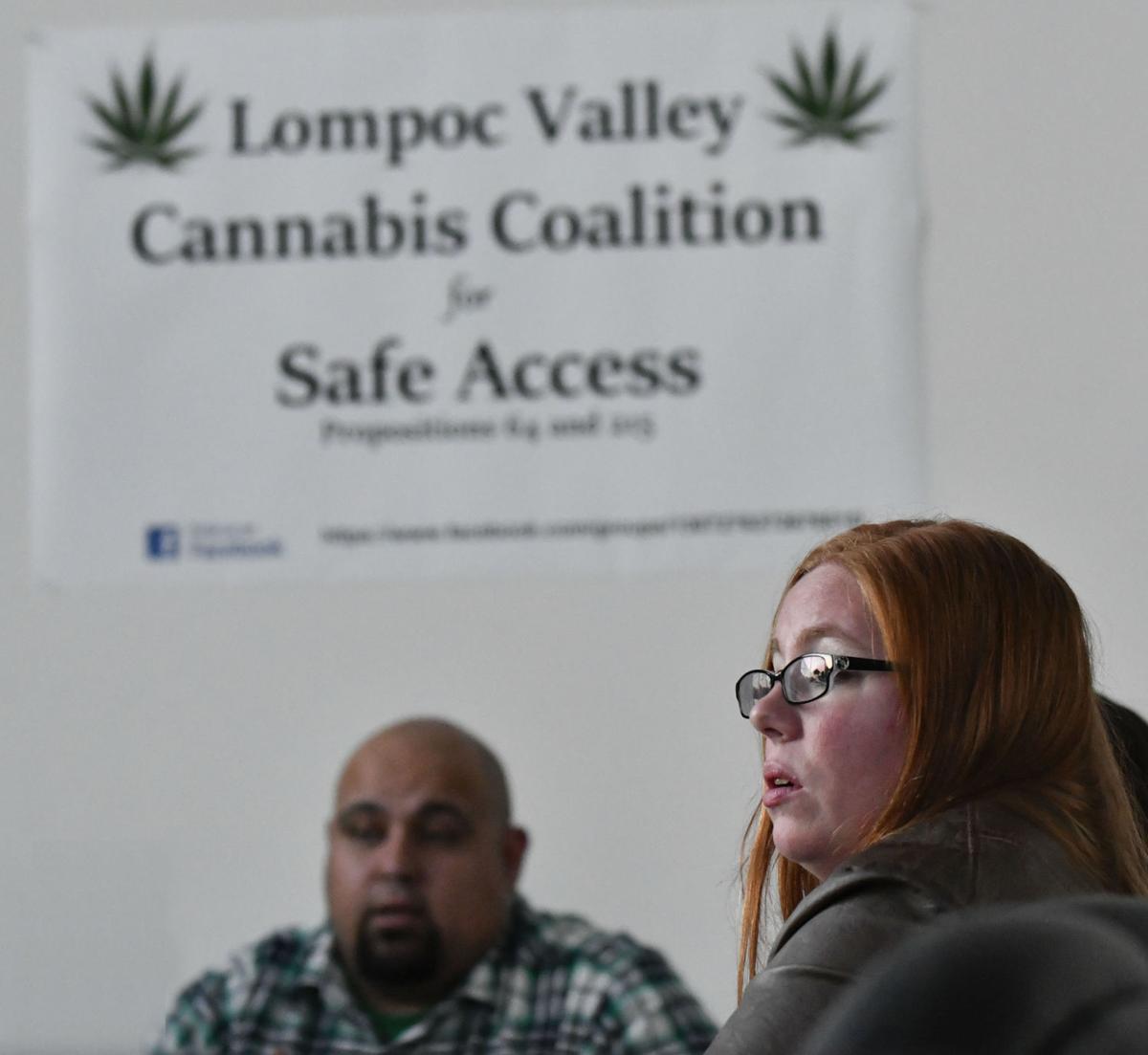 Tyann Caulfield, front, talks during a meeting of the Lompoc Valley Cannabis Coalition on Friday evening. 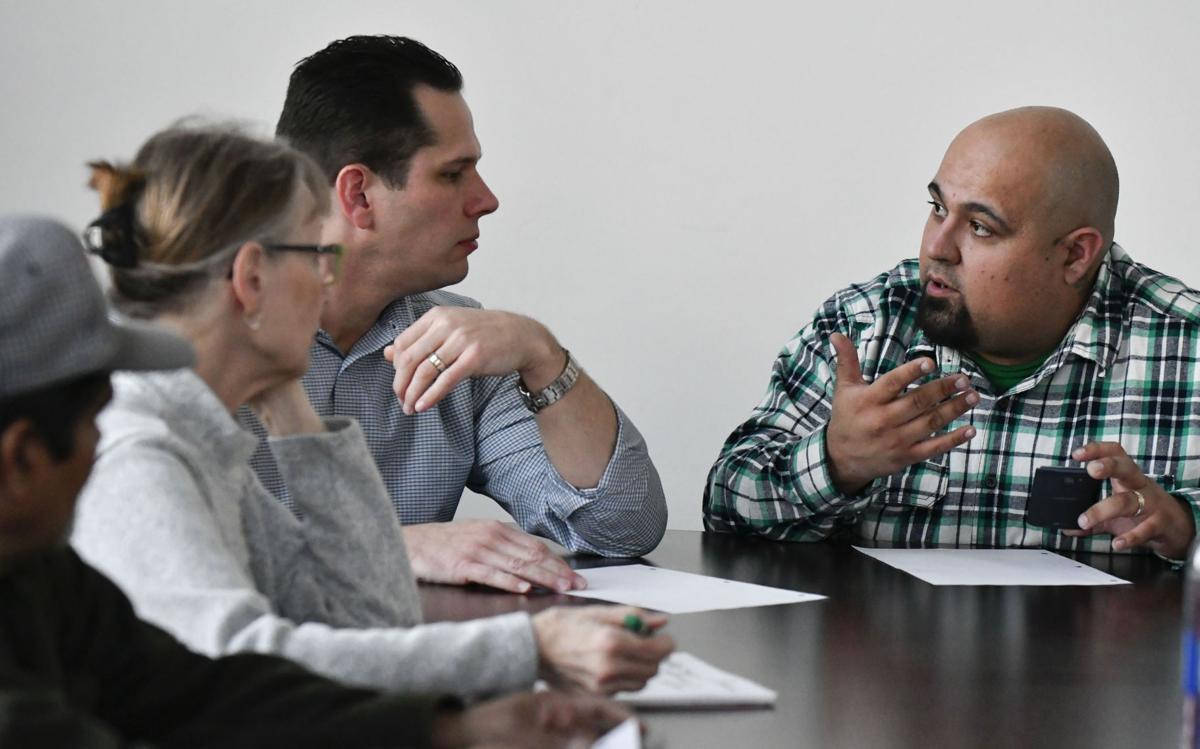 Joe A. Garcia, right, and Robert Traylor talk during a meeting of the Lompoc Valley Cannabis Coalition on Friday evening.

Like many others around the city and the state, Lompoc resident Joe Garcia said he was ecstatic when Proposition 64 passed by a wide margin in the 2016 election.

The ballot measure, which essentially legalized recreational marijuana cultivation and use within the state, was seen by Garcia and others as a step toward destigmatizing a plant that many view as healing and/or comforting, but that many others see as a harmful controlled substance.

Garcia’s elation, however, turned to frustration when he saw a proposal that was put before the Lompoc City Council just six weeks after the Nov. 8 election. Members of city staff, including the police and fire chiefs, presented a potential ordinance to the council on Dec. 20 that would have placed strict — overly strict, according to many — guidelines and regulations on several aspects of cultivation.

Several residents attended that meeting and spoke out against the proposal, which ultimately was shot down unanimously by the council for what some members said was its overreaching scope. Instead, the council decided to form an ad-hoc committee to explore the issue further.

“It seemed like more of the same,” Garcia said of that failed proposal, “and I was a little enraged by that.”

Garcia said he felt like the proposal showed a clear disconnect between city leaders and the 57.6 percent of Lompoc voters — a percentage that was on par with statewide results — who successfully passed Prop 64. Rather than sit back and do nothing, Garcia set out to bring the sides together.

Not long after that meeting, he created a Facebook group titled, “Lompoc Valley Cannabis Coalition for Safe Access.” The group was an attempt to gather local residents to “build a bridge of dialogue between the people and the marijuana ad-hoc committee, in order to promote and bring safe, legal access to the people of Lompoc, without overburdening requirements and restrictions from the city,” he said.

Membership quickly grew for the group, which now has its sights aimed on influencing marijuana-related policy in the city.

“I just said, ‘I’ll try to do something,’” Garcia said. “I don’t have much organization skills, but I felt like if I didn’t do it, nobody else would do it.”

After gaining dozens of members on the Facebook group, Garcia began reaching out to some of them, based on their professions or backgrounds, for physical meetings to lay out a blueprint for the group.

Among the handful of members who took part in the early organizational meetings was Robert Traylor, a Lompoc-based attorney.

At the Dec. 20 council meeting, Traylor raised a number of concerns with that night’s proposal, chief among them the fact that he felt like the policy violated residents’ constitutional rights. Looking back on it, he said this past week that the proposed ordinance’s faults may have been a blessing in disguise.

“As frustrated as I was reading that ordinance, in retrospect I think that because there was such a heavy-handed approach, it gave the City Council an opportunity to say, ‘Hold up, let’s rethink this,’” he said. “If it had just a couple of half-measures and nobody was really happy with it, it might’ve passed. But because it was so over-the-top, it made it easier for them to say, ‘Clearly this doesn’t work.’”

The primary goal for the newly-formed Lompoc Valley Cannabis Coalition is to come up with something that does work.

To that end, members of the group are working to be as prepared as possible to present a unified message when they meet with the City Council’s ad-hoc committee, which will include Councilmembers Jenelle Osborne and Victor Vega and other city department heads.

Among the topics being explored by the group are marijuana deliveries and dispensaries, both of which are now outlawed by the city, as well as policies for growing recreational and/or medical marijuana both indoors and outdoors.

“I felt that if we could organize everybody and get everyone on the same page, then we could go to City Council meetings and we could be prepared and deliver facts and show that we are unified and this is something that we want,” Garcia said.

While many had deeply personal reasons for joining the group and/or advocating for easier marijuana access within the city, Traylor said his motivation is simple.

“I was looking at it from a different perspective in that it doesn’t really matter why you want to do it — you should be able to have reasonable access to something that is legal,” he said.

The group was provided with a place to hold meetings by a local business and another business offered to help the group print fliers to raise awareness, Garcia said.

A key aspect, he noted, is that the group isn’t just limited to people in favor of laxer marijuana laws. There are some anti-marijuana members of the group, an element he contends will help the group members identify and prepare for certain arguments they may face.

“We want to address the concerns of the people who are anti-marijuana,” Garcia said. “We’re not trying to say that because we’re the majority, we rule and this is what has to be.

“I feel like through these ad-hoc committee meetings, which are open to the public, we need to address those concerns,” he added, “because the city needs to get behind a plan that they can endorse, that they know is not going to be one-sided.”

To prepare themselves for the upcoming ad-hoc meetings, the group is planning to send Traylor to a marijuana law seminar being presented by the National Organization for the Reform of Marijuana Laws, or NORML, on Feb. 18 in Oakland.

Members have donated money to help cover Traylor’s expenses, and Traylor said he is hopeful to make the trip.

“I want to contribute to the group as much as I can using my educational background, my being on the Economic Development Committee, and my contacts in and throughout the city, to work toward a solution that works for Lompoc and not just says, ‘No, let’s stick our hand in the sand,’” he said.

Members of the group say they were encouraged by some recent comments from city leaders regarding marijuana and Prop 64.

Osborne, particularly, embraced the substance as a potential revenue source for the city and advocated potentially bringing in marijuana businesses during a city council candidate forum last fall. Osborne, a former head of the city’s Economic Development Committee, acknowledged then that her stance might cost her some votes, but she ended up as the runaway winner in the three-person field.

Osborne stood by those campaign comments during the Dec. 20 City Council meeting.

“We need to think outside the box and we need to look at this as a 21st-century solution instead of a 20th-century problem,” she said.

Janet Blevins, a member of the Cannabis Coalition, said it was that economic aspect that inspired her to join the group.

"The city should develop an ordinance that would mesh with the state law and also take advantage of the ... taxes resulting from legal commerce," she said.

Garcia said he appreciated Osborne's stance and noted that he was looking forward to discussions with her and other members of the ad-hoc committee.

“I think the city did right by initiating an ad-hoc committee to look into this, because I certainly don’t want a city attorney or police chief to determine what it is that everybody in Lompoc needs,” he said. “I was taken aback by what they did (with the Dec. 20 proposal), but I understand where they were coming from. I think that by community education and outreach, we can change people’s opinions and re-educate them and, hopefully, we can make a difference.”

To reach the Lompoc Valley Cannabis Coalition for Safe Access, email lvccsa@gmail.com or search the name on Facebook.com.

Public safety, financial concerns and marijuana were among the matters explored Thursday night at the second public forum for candidates runni…

Tyann Caulfield, front, talks during a meeting of the Lompoc Valley Cannabis Coalition on Friday evening.

Joe A. Garcia, right, and Robert Traylor talk during a meeting of the Lompoc Valley Cannabis Coalition on Friday evening.