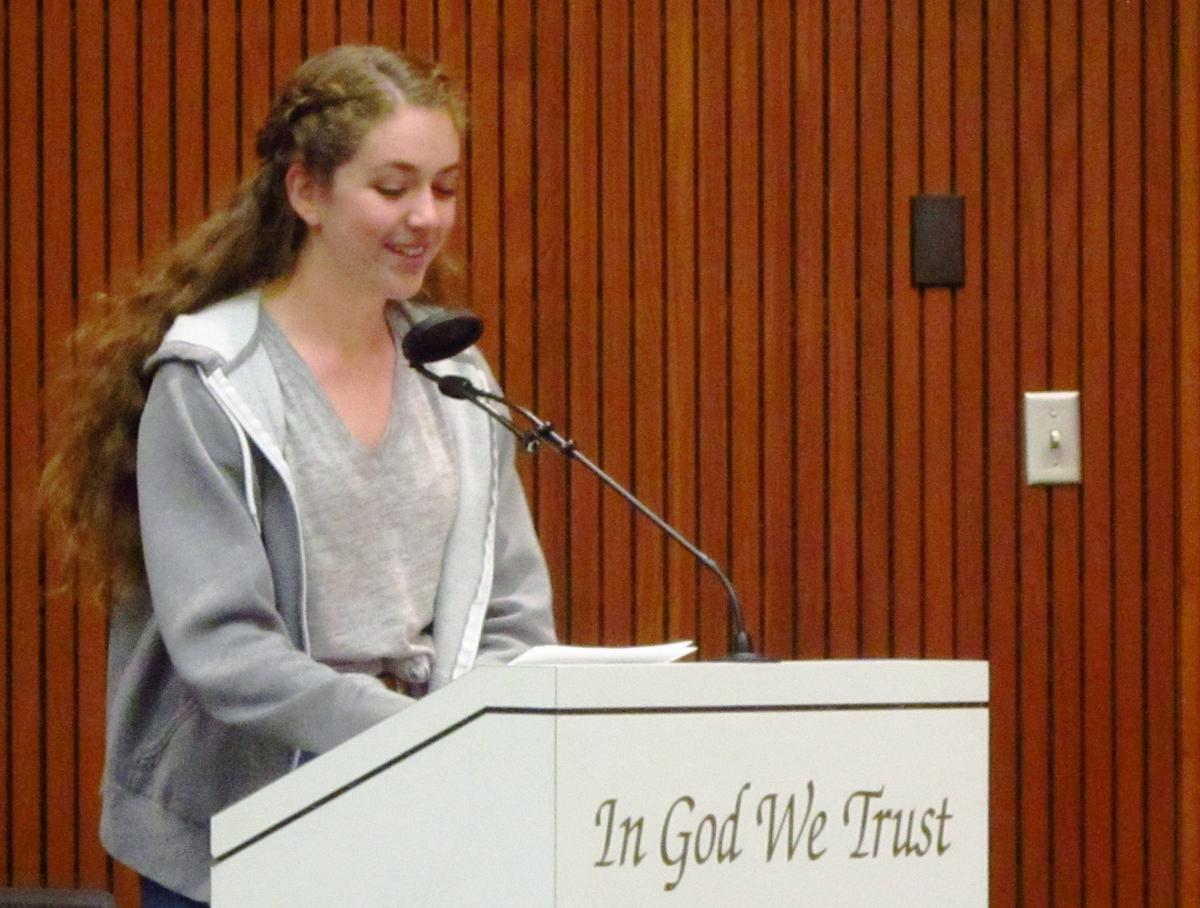 Cabrillo High School student Shelby Wuitschick, who dances at a local studio, addresses the Lompoc City Council on Tuesday night to ask that it give dance studios the same 'youth center' protections in its cannabis ordinance that are afforded to schools and other child recreation areas. 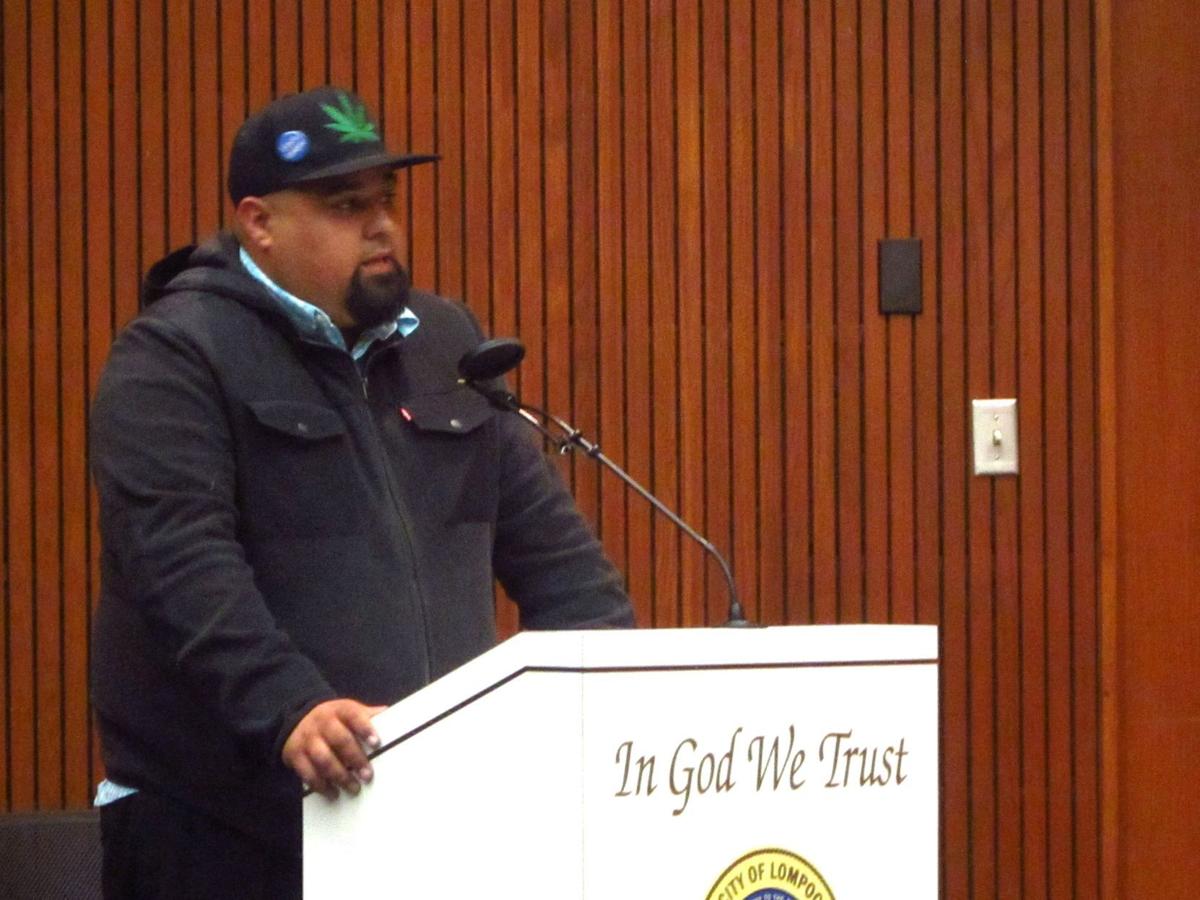 Joe A. Garcia, the founder of the Lompoc Valley Cannabis Coalition, speaks before the Lompoc City Council on Tuesday night to ask that the governing body not include dance studios as 'youth centers' as it relates to the city's cannabis ordinance. 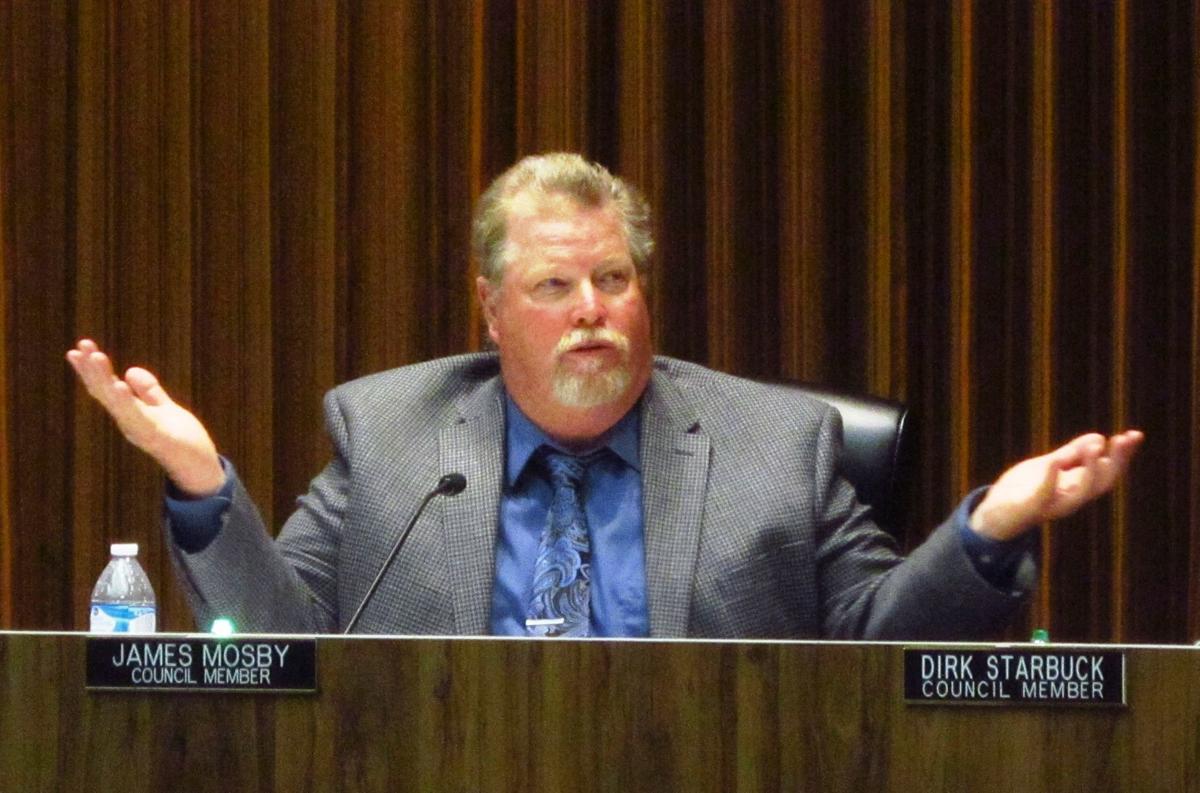 The issue, which had been temporarily decided at the March 6 City Council meeting, was brought back for discussion Tuesday at the request of Councilman Jim Mosby. Mosby was the lone member of the council to change his vote from that March 6 meeting, as he helped swing the issue in the other direction with another 3-2 vote, this time in favor of not giving dance studios the “youth center” designation, and resulting 600-foot buffer zones, they had previously been afforded.

Mosby, who made Tuesday’s ultimately successful motion, was backed by Councilmen Dirk Starbuck and Victor Vega. Mayor Bob Lingl and Councilwoman Jenelle Osborne voted against the move, keeping with their votes last month to have the studios considered as youth centers.

Mosby said his change of heart was based in large part on how the state defines “youth centers” in its Health and Safety Code.

According to the state, a youth center is “any public or private facility that is primarily used to host recreational or social activities for minors, including, but not limited to, private youth membership organizations or clubs, social service teenage club facilities, video arcades, or similar amusement park facilities.”

Mosby argued that, given the studios' mostly limited hours of operation, the dance studios are primarily closed and thus are not primarily serving youth.

That opinion was strongly rebuffed by Osborne, who said she felt that dance studios “absolutely” meet the state’s definition of a youth center. Perhaps sensing the way the vote was going, she issued a warning to her fellow council members just before the vote was taken.

“You are opening the door to litigation and a fiscal cliff we do not need to walk off,” she said.

“I cannot support changing this and playing around and opening the door to litigation,” she later added. “It’s not an area I want to test or draw attention to in our community. I can’t support this and I think it’s a bad decision.”

Fourteen community members, including cannabis advocates, at least one youth dancer, a dance studio owner and Lompoc Police Chief Pat Walsh, weighed in during the public comment period. The speakers were split down the middle on the issue.

Cabrillo High School junior Shelby Wuitschick, who said she dances at the Classical School of Ballet, asked the council to keep the buffer zones around all of the city’s studios.

“As a student I have seen some pretty dumb ideas, and in all honesty this is one of them,” she said to the council. “The idea of not allowing a dance studio to be a youth center, and building a dispensary right next door to a ballet studio is outrageous.

“It actually contradicts everything we are taught as a child,” she said, noting popular anti-drug campaigns aimed at children.

Both of Wuitschick’s parents and Angela Mill, the owner of the Classical School of Ballet, also spoke and supported Wuitschick’s opinion.

Others argued that the buffer zones weren’t needed around dance studios, particularly since youth won’t be allowed inside a cannabis business, with some speakers suggesting that the whole argument was just another ploy by anti-cannabis residents to limit or curtail the local legal marijuana industry.

It was further suggested that the dance studio buffer zones, which initially became an issue in February, could adversely affect potential cannabis business owners who have already secured leases in areas that have since been determined to be restricted.

Osborne addressed that concern directly, noting that it wasn’t a city problem.

Osborne, who led the way in pushing for the city to allow the cannabis industry and even helped author the city’s cannabis ordinance, noted the council’s March 20 decision to not put a local tax on the cannabis industry — a move that she and Lingl both opposed — and said that some of her fellow council members were being too lenient on the industry.

“A majority of council keeps making decisions that seem to be catering to an industry, rather than treating it normally,” she said. “I’m (hoping) that this turns out well; I want to see everyone feel like this is not a bad decision that I helped lead, and I take full ownership of that. But I think there’s some giving that needs to come back from the cannabis industry at this point, because you’ve been given a lot by this council already with the kind of ordinance that you have.”

During the discussion, Vega proposed a move that would limit all buffer zones from 600 feet to 400 feet. He got a second and third from Mosby and Starbuck to have that discussion brought back at a future date, but Mosby later rescinded his second after City Attorney Joe Pannone gave a “strong recommendation” to not go down that route. Pannone said that state law stipulates that the buffers need to be 600 feet and said he’d rather let “some other city” take that bold step and open itself up to potential litigation.

“It’s up to you whether you want to follow that recommendation,” Pannone said.

The motion ended up dying due to lack of support.

In an unrelated move, the council followed a staff recommendation and voted 4-1 to formally support Proposition 69, which will be on the June 5 ballot.

If successful, Prop 69 would require that revenue generated from Senate Bill 1 — commonly referred to as the “gas tax” that was signed into law by Gov. Jerry Brown in April 2017 — be used only for transportation-related purposes and be exempt from the state appropriations limit, also known as the Gann Limit.

According to a report prepared by Lompoc city staff, Senate Bill 1 is expected to bring about $12.3 million to the city over the next 10 years for road improvements. Further, according to a report that city staff provided from the American Road & Transportation Builders Association, Senate Bill 1 is projected to have a total economic impact of $182.6 billion over the next decade.

“The missed opportunity to keep and secure this funding will have destructive consequences on the city’s ability to perform much needed street maintenance and transit projects that are already in the works,” read a portion of the staff report.

Mosby provided the lone vote against the move.

Prior to voting, Mosby voiced opposition for Senate Bill 1 and suggested that Californians already pay more than enough in fuel taxes. A move, led by gubernatorial candidate Travis Allen, to place a repeal of Senate Bill 1 on the Nov. 6 ballot failed this year due to a lack of valid signatures.

“There’s a lot of hidden taxes in here and it’s gonna hurt a lot of people,” Mosby said of Senate Bill 1.

The next regular meeting of the Lompoc City Council is scheduled for 6:30 p.m. April 17.

Registration for Lompoc 'State of City' luncheon open through Friday

Anyone interested in attending this year's Lompoc State of the City presentation will need to register by Friday.

New major retailers that are set to enter the Lompoc market, the continued implementation of the cannabis industry in the city, and positive t…

A committee that was formed to explore the idea of creating a cannabis trade association in Lompoc held its first meeting Monday night, at whi…

Lompoc City Councilman Jim Mosby, who is at the center of the city’s decision not to categorize dance studios as youth centers in relation to …

With a pair of split votes, the Lompoc City Council on Tuesday night shot down a pair of utility rate increases that had originally been appro…

Cabrillo High School student Shelby Wuitschick, who dances at a local studio, addresses the Lompoc City Council on Tuesday night to ask that it give dance studios the same 'youth center' protections in its cannabis ordinance that are afforded to schools and other child recreation areas.

Joe A. Garcia, the founder of the Lompoc Valley Cannabis Coalition, speaks before the Lompoc City Council on Tuesday night to ask that the governing body not include dance studios as 'youth centers' as it relates to the city's cannabis ordinance.