Members of the Lompoc City Council listen to members of the public comment on rules on a local cannabis industry during their meeting Tuesday night. 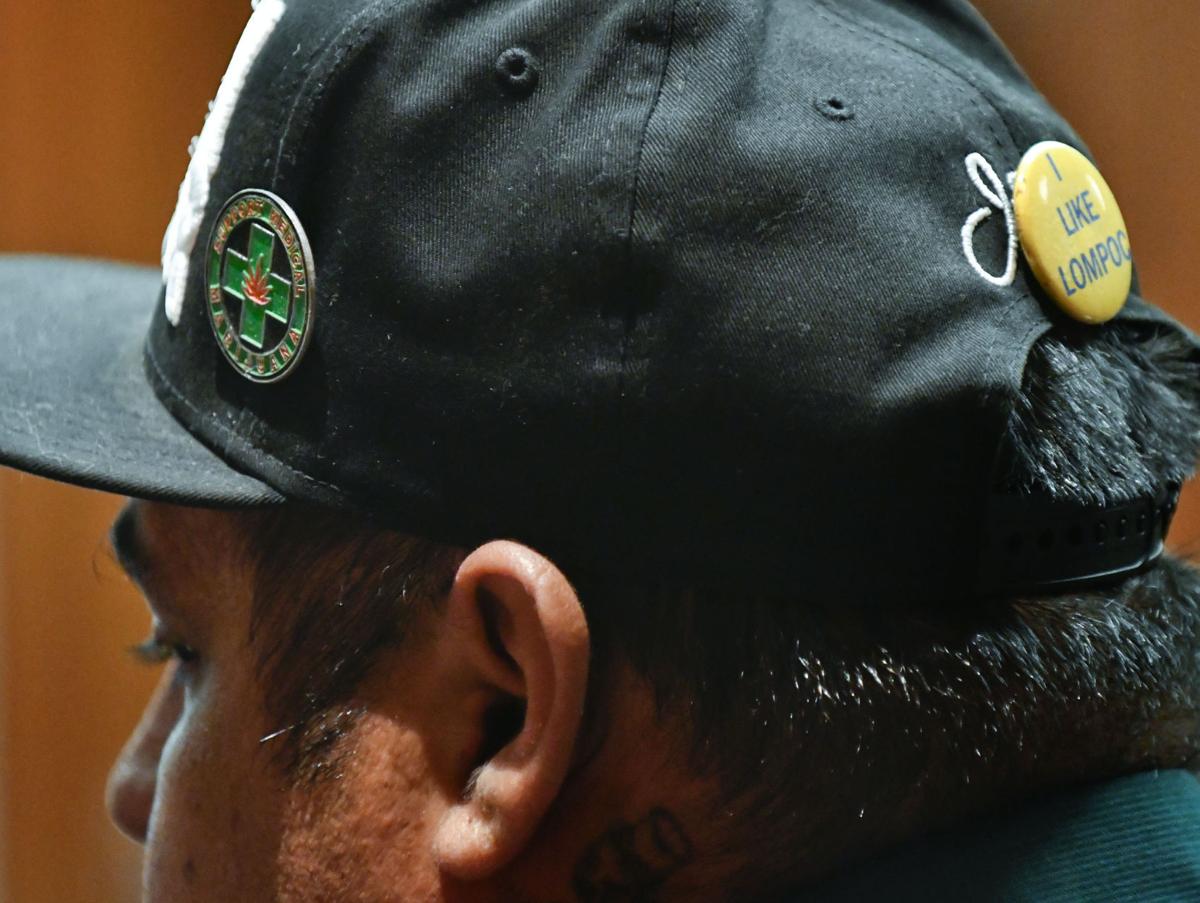 Joe A. Garcia wears a medical marijuana pin and an I Like Lompoc button on his hat during the Lompoc City Council meeting Tuesday night. 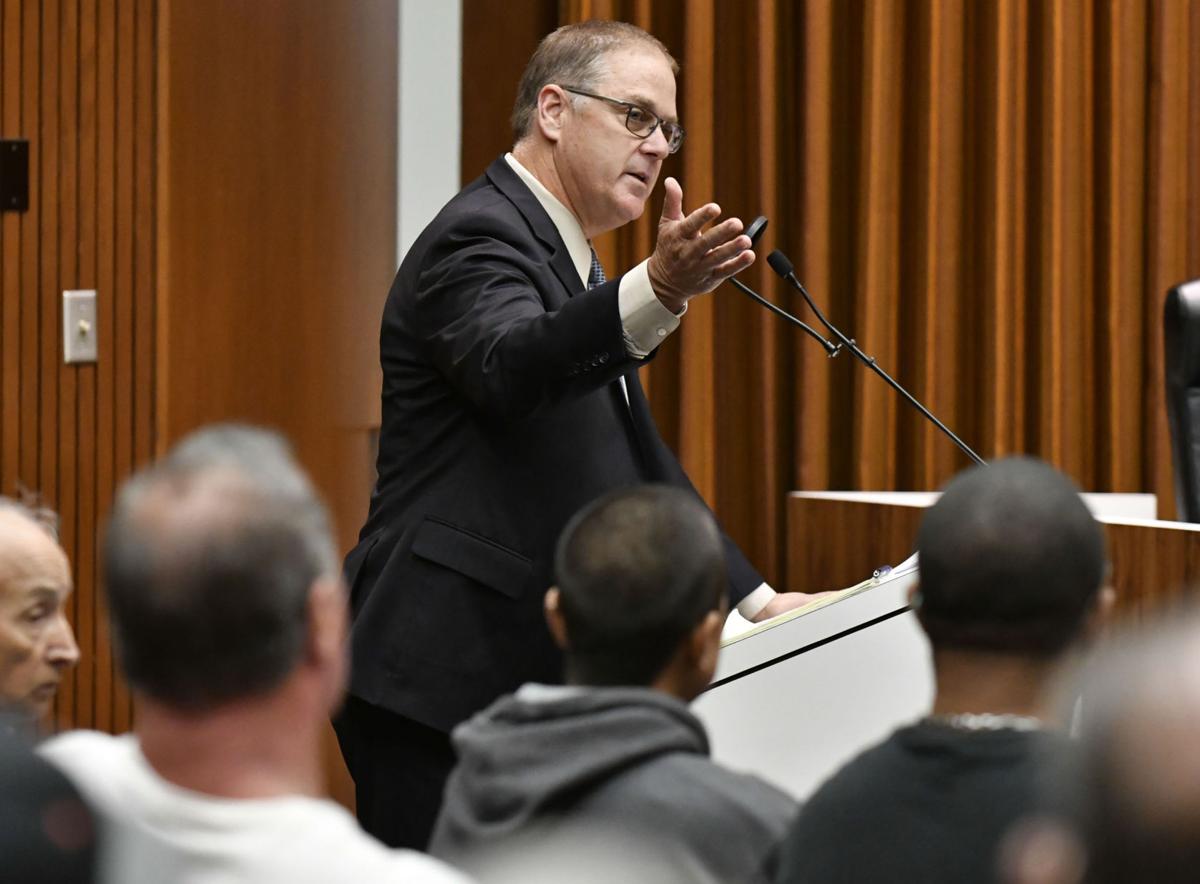 Marijuana was back under the spotlight at Tuesday night’s meeting of the Lompoc City Council, during which members of the council, city staff and several area residents dissected the latest draft of an ordinance regarding the use of cannabis in the city.

The council spent nearly three hours discussing the draft before ultimately deciding to send it back to city staff for a series of revisions. One of the major sticking points for members of the council was that the ordinance limited the number of cannabis businesses in the city to four, rather than allowing the free market to dictate the total.

Other concerns included the ordinance placing overburdening regulations on potential businesses, such as requiring that they allow real-time 24-hour video access by the Lompoc Police Department and that all appeals from businesses would be heard only by the city manager, who would have final say.

A version of a revised ordinance is set to be brought back for a new first reading at the council’s next regular meeting on Oct. 17.

Several community members also raised a range of concerns with the proposal.

Seventeen speakers addressed the council, with some suggesting that the draft was at least a positive step forward from last year’s proposal that faced near-universal disapproval, while the vast majority said they felt the draft went against the council’s previous recommendations and violated citizens' constitutional rights, among other issues.

The line in the proposal dealing with the real-time video, specifically, was brought up by many speakers as a major concern. Multiple speakers suggested that requiring that the police have video access to any business — including stores and cannabis lounges — violates the 4th Amendment of the U.S. Constitution, which gives citizens freedom from “unreasonable searches and seizures.”

Another issue brought up by several speakers was the ordinance’s requirement that no person shall smoke cannabis “without controlling odors emanated from that smoking, which are disturbing to people” around that smoke. This, according to some speakers, was tantamount to effectively outlawing smoking, since smoke can’t be reasonably controlled.

It was pointed out by some that the state already has regulations in place that restrict smoking in certain places, such as near schools or youth centers.

“Let’s go back to the beginning and go under state law and (determine) what do we need in this city to regulate,” said Crystal Reyes, who said she managed a cannabis dispensary in Goleta.

Reyes said there was “so much wrong” with the draft proposal, which she encouraged the council to reject.

Mayor Bob Lingl expressed concern that the city’s public safety leaders weren’t involved in drafting the ordinance, which states that it “will further the public health, safety and general welfare” of the community.

“I have to take an issue with that since we did not get police, fire and (the) planning commission involved in putting together this ordinance,” he said. “So I don’t know how we can say this is going to protect public health and safety.”

Lompoc Police Chief Pat Walsh said he read over the ordinance and then reinforced his long-stated apprehension to allowing the cannabis industry in Lompoc.

“I have a real problem with the commercialization of marijuana in Lompoc because there are a lot of wolves in sheep’s clothing and they’re gonna come into our town,” he said.

He advocated for the police department to be involved in the security process for businesses and noted that he would need to train officers, at a cost to the city, for dealing with issues like detecting when people are under the influence.

Walsh advocated for cameras at cannabis businesses, particularly in parking lots, by citing murders on dispensary sites that he said he found reported in news stories online. He also stressed that edibles were concerning to him, and referenced conversations he said he had with Colorado law enforcement officials, whom he said told him horror stories about murders and suicides caused by overdoses on marijuana edibles.

Councilwoman Jenelle Osborne, who was a member of the ad hoc committee that helped develop the ordinance, seemed to take exception to some of Walsh’s comments.

“The fear-mongering isn’t helpful,” she said before expressing that she felt many of Walsh’s concerns were addressed either in the ordinance or by current state law.

She went on to say that the city, by accepting certain aspects of the industry, would make itself eligible for state grants that could go to law enforcement to help cover costs associated with training and new equipment.

Another of the “overreach” issues raised by Mosby was that the ordinance outlines qualifications for potential businesses that ask them how they intend to benefit the community and provide economic benefits to the city, among others. He said he felt that some of those restrictions should be removed, a suggestion that was backed by Councilmen Dirk Starbuck and Victor Vega.

Osborne said she was in favor of leaving those in as a way to appease some of the “very large minority” of people who voted against Prop. 64, which essentially legalized adult use of marijuana in the state, in last year’s election. She said that having those items included shows that the potential business owners have “skin in the game.”

Mosby countered that those questions aren’t posed to operators of other businesses, so they shouldn’t be selectively asked of cannabis proprietors.

The full draft ordinance is available online at http://www1.cityoflompoc.com/councilagenda/2017/171003/n10a01.pdf.

The Lompoc City Council moved forward Tuesday night in its potential transition to district-based elections and, separately, gave a vote of co…

Lompoc planning manager to retire after 20 years with city

Lompoc city leaders bid farewell this past week to a longtime city administrator, whose presence, according to officials, will be missed.

Members of the Lompoc City Council listen to members of the public comment on rules on a local cannabis industry during their meeting Tuesday night.

Joe A. Garcia wears a medical marijuana pin and an I Like Lompoc button on his hat during the Lompoc City Council meeting Tuesday night.