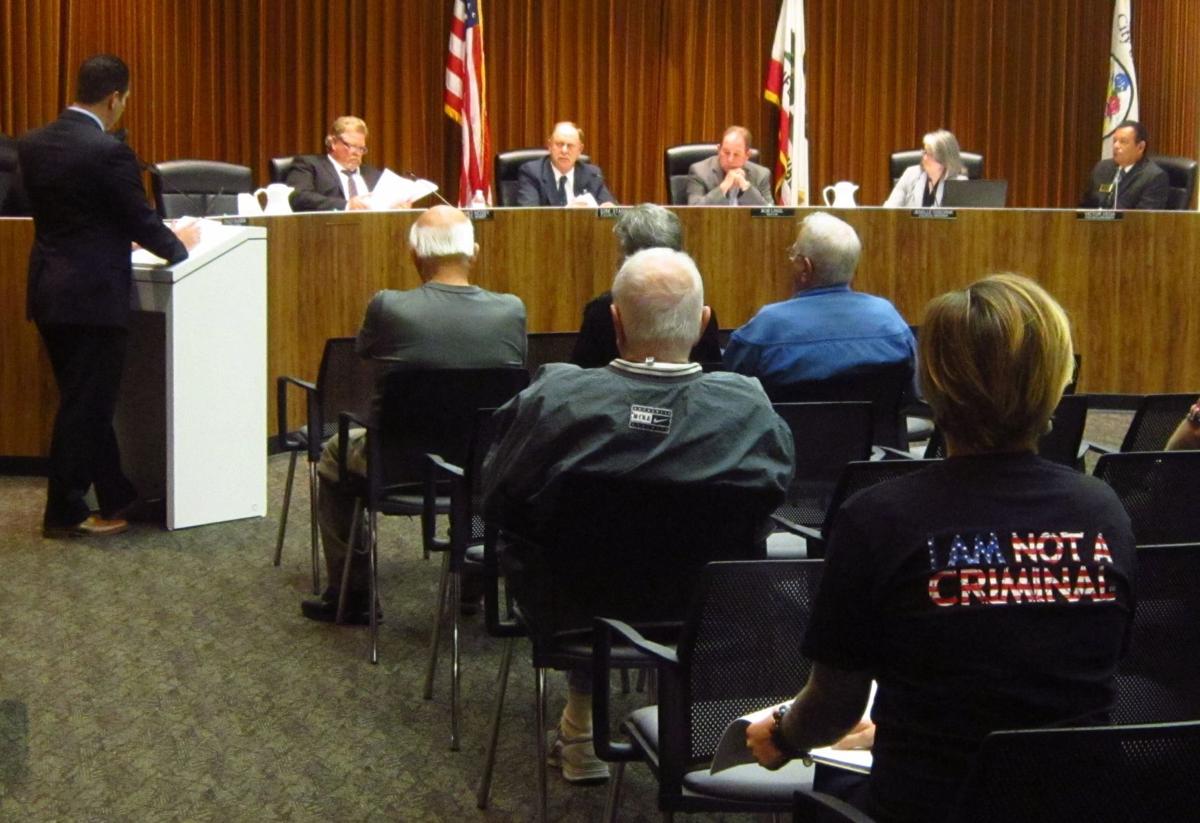 Lompoc resident Crystal Reyes wears a shirt that reads "I am not a criminal" as she watches Rob Traylor, at podium, address the Lompoc City Council regarding a proposed cannabis ordinance during Tuesday night's meeting. 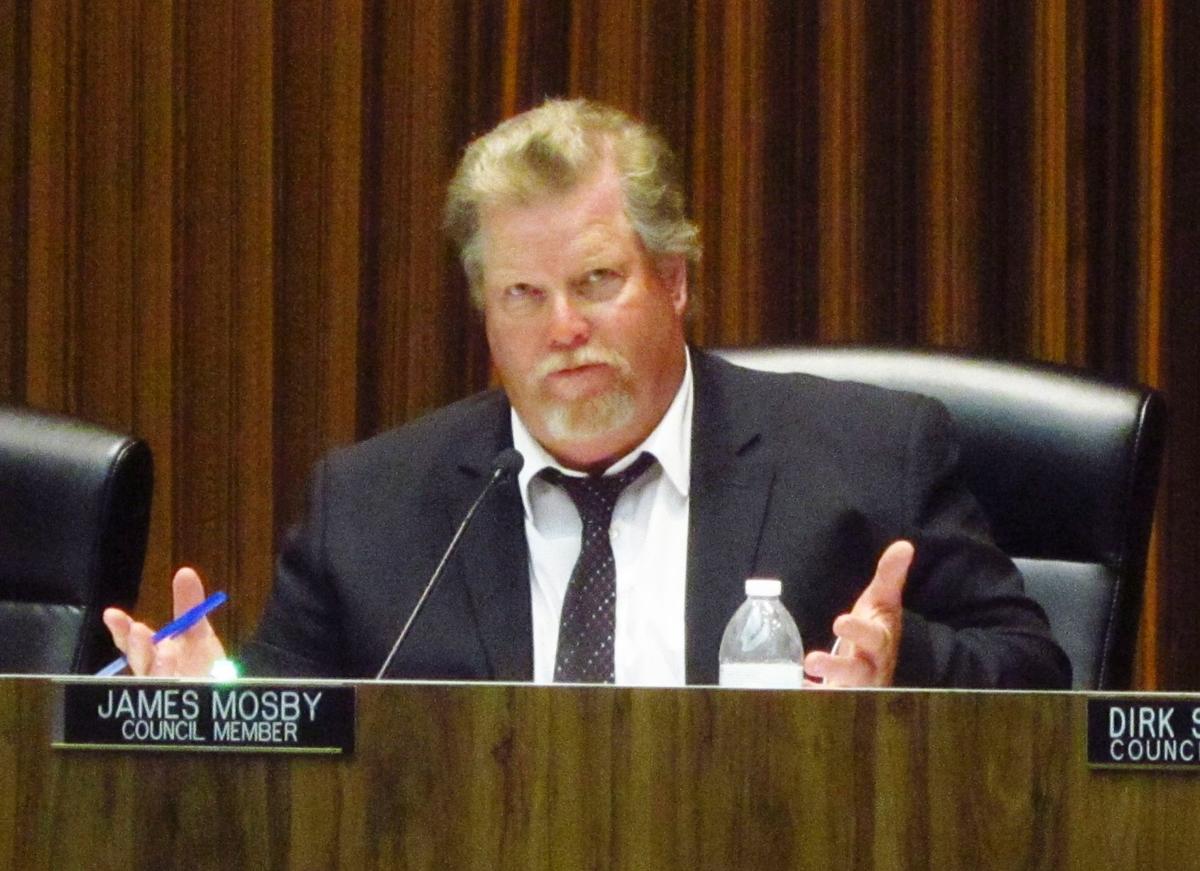 After 10 months of discussions and deliberations, the Lompoc City Council on Tuesday night voted to move forward with an ordinance that will allow the cannabis industry to open up shop within the city’s borders.

The council voted 4-1 to proceed with the ordinance, which outlines the regulations for personal marijuana use, as well as the way the cannabis industry will be regulated within the city. One of the major aspects of the ordinance is that it will not restrict the number of cannabis businesses within the city and will instead allow the free market to dictate who enters.

The ordinance will be brought back at a future meeting for a second reading and adoption.

The council discussed the matter for a little more than an hour on Tuesday night before deciding to push ahead. Much of that discussion involved recommending changes to the proposed draft of the ordinance. It was in part because of those many alterations that Mayor Bob Lingl said he voted against the motion to adopt.

“What we want when we pass an ordinance is we want it to be clear and concise,” Lingl said, before imploring the council to vote no and allow more time for review by the city's public safety departments. “It’s obvious to me, with the public comment and the discussion we’ve had, that we’re trying to push an ordinance through that is not clear and concise. … Do we really want to rush this thing through and make some mistakes?”

Councilman Victor Vega, who made the initial motion to move forward with adoption, took a completely different view.

“As for pushing it back, and the fear factor that other people are gonna tell us what to do or tell you what to do, we’re the voices for you guys,” he said, apparently referring to the audience and the community at large.

“I think that with a few changes there, I think we’re prepared, with the consensus from the council, to move forward with this,” he added, “instead of always using the fear factor that we have to have everybody and their uncle here to tell us yes. I don’t agree with that.”

Among the changes made by the council was to eliminate language from the ordinance that set a so-called three strikes program in which a cannabis business could ultimately have its license revoked if it has three incidents that result in responses by police or code enforcement within a 12-month period.

The conversation surrounding that aspect focused on the fact that the language wasn’t clear on what kind of incident defines a strike. Councilman Jim Mosby, in particular, raised issue with this, noting that such a regulation could lead to business owners deciding against contacting law enforcement out of fear of having their licenses revoked.

Lompoc Police Chief Pat Walsh, who at past meetings has raised several concerns of his own with allowing commercial marijuana in Lompoc at all, suggested that the system would be similar to how the city handles crimes and other incidents at bars. He acknowledged, though, that the language in the cannabis draft ordinance was vague.

The audience at Tuesday’s meeting was much smaller than it had been at past meetings relating to cannabis. There were about 30 people in attendance — also on the agenda was a second public hearing relating to district-based elections — and just seven public speakers who offered comment on the cannabis ordinance.

The speakers raised issues both with aspects of the ordinance, as well as with the maps that were drawn up by the city to reflect where cannabis businesses could operate.

Some speakers countered that playgrounds are specifically defined by the state separately from youth centers and that some or all of the parks in question should actually be considered playgrounds.

The approved ordinance also contained many language changes from the draft that was introduced at the Oct. 3 meeting and faced significant criticism from some members of the public and council.

One of those was changing a section that initially required that no person shall smoke cannabis “without controlling odors emanated from that smoking, which are disturbing to people residing or present on adjacent or nearby property.”

Some speakers noted that that line was unclear, so it was ultimately changed to read that no person shall smoke cannabis “in such a way that materially disrupts the ability of any reasonable person to enjoy the reasonable use of that person’s residence…”

After the vote of approval, some in the audience offered applause.

The process to develop the ordinance began last year, shortly after the passage of Prop 64, which legalized adult use of recreational cannabis, in the November 2016 election. Since then, the city has presented a few draft proposals — the first, which was roundly rejected, on Dec. 21 — and held several meetings with an ad hoc committee that was formed to focus on marijuana-related issues.

The district-based election public hearing lasted only about 20 minutes and primarily consisted of consultant Doug Johnson, with National Demographics, Inc., describing the process.

Johnson noted that resident-created district maps need to be submitted to the city by Oct. 26. He also introduced DrawLompoc.org, a website through which members of the community can draw up district maps, or get assistance on creating maps. The maps are expected to be reviewed at the next public hearing, planned for the council’s next meeting on Nov. 7.

Johnson noted that maps need to be equally distributed among the city's population, with about 9,800 people in each of the four districts that will be used to select the four city council members. In response to a question from a community member, he said that undocumented residents are included in the population count but that inmates at the federal prison are not.

The maps will be redrawn after the 2020 election to coincide with new census data, and will be used for 10 years after that, Johnson said.

Just a day after an alleged murder involving members of Lompoc’s homeless population, safety issues involving the homeless, as well as the cit…

As part of its ongoing transition to district-based elections, the Lompoc City Council on Tuesday night had its first chance to eliminate pote…

This November’s election will mark Lompoc’s first under a district-based format, so to help voters prepare for the new system, the city has sc…

Marijuana was back under the spotlight at Tuesday night’s meeting of the Lompoc City Council, during which members of the council, city staff …

Like many others around the city and the state, Lompoc resident Joe Garcia said he was ecstatic when Proposition 64 passed by a wide margin in…

The Lompoc City Council moved forward Tuesday night in its potential transition to district-based elections and, separately, gave a vote of co…

Lompoc resident Crystal Reyes wears a shirt that reads "I am not a criminal" as she watches Rob Traylor, at podium, address the Lompoc City Council regarding a proposed cannabis ordinance during Tuesday night's meeting.